Living with cats is a whole experience where you feel all sorts of emotions.

We’ve all heard beautiful stories of a person rescuing a stray cat, helping them get back on their feet through love, affection, and trust. And then the inseparable bond is locked in forever as the person adopts that cat. A happily ever after.

Nope! Not that simple. The story doesn’t end there. Yes, the kitty is going to embrace all the love you give to them. But it’s not always that people find stray cats on the street and adopt them. Some take the route of a shelter and get themselves a nice little kitty, in hope that they will grow and live together, forever.

Love at first sight doesn’t always mean you’ve now bonded forever. It sometimes gets super hard to live around kitties. They can make your life hell. It’s absolutely impossible to have them sit quietly purring their day away. They are adventurous creatures, they like to have fun all the time.

This artist, Laksheri, chose a very creative way to show the world what it is like to live with 4 cats in the house. And she did it through comics. The comics are shared on her Instagram. Feel free to check them out.

Let’s take a look at these comics and see Laksheri’s experience living with four kitties.

1. You may think they care for you, but that only happens when they are fully fed. 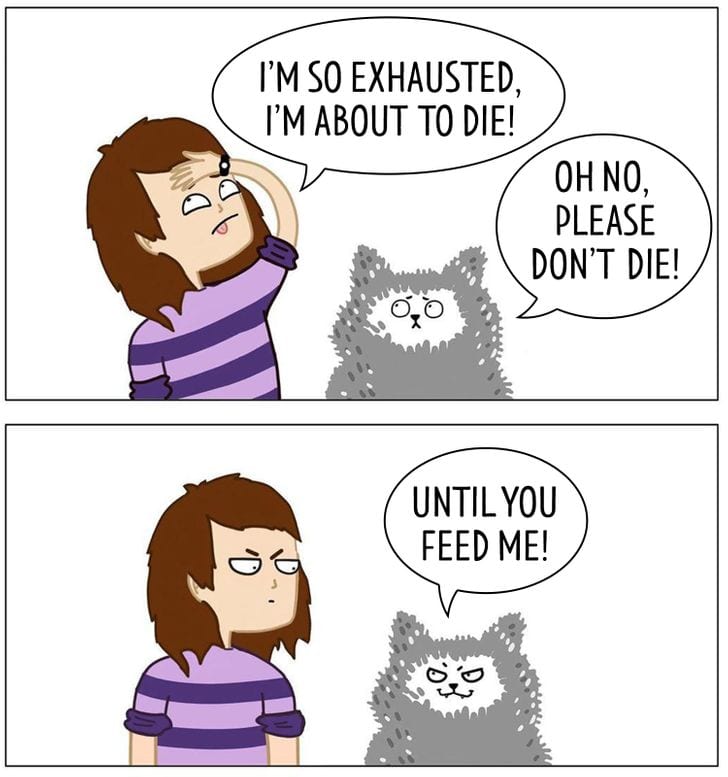 2. Their magical powers of attraction can make you forget everything! 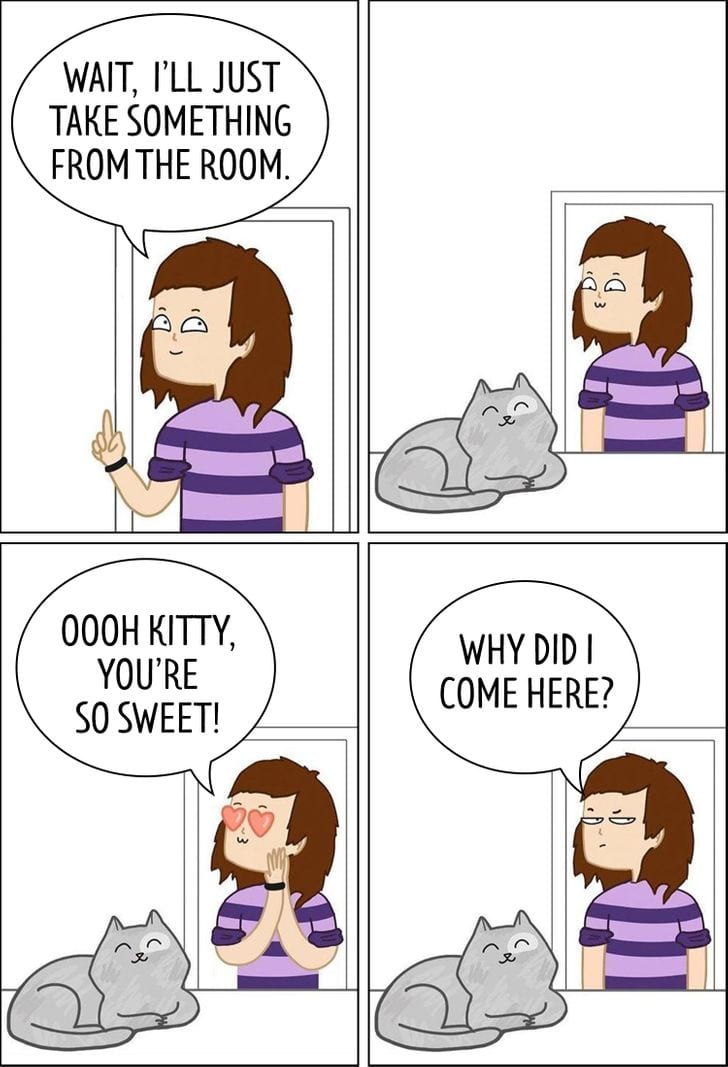 3. Favoritism exists in their world too. 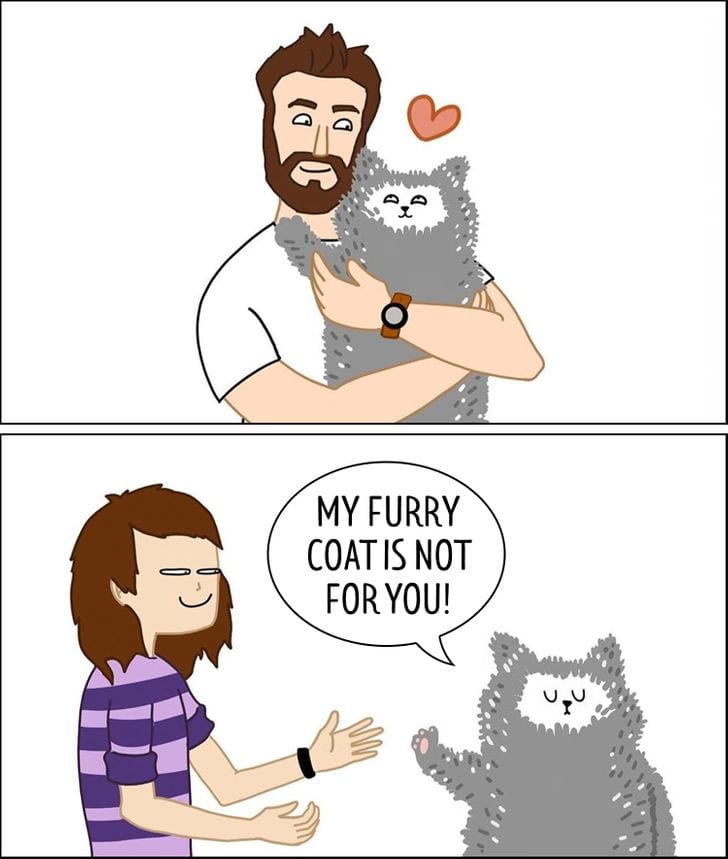 4. Sell off all fragile items because they are never going to listen 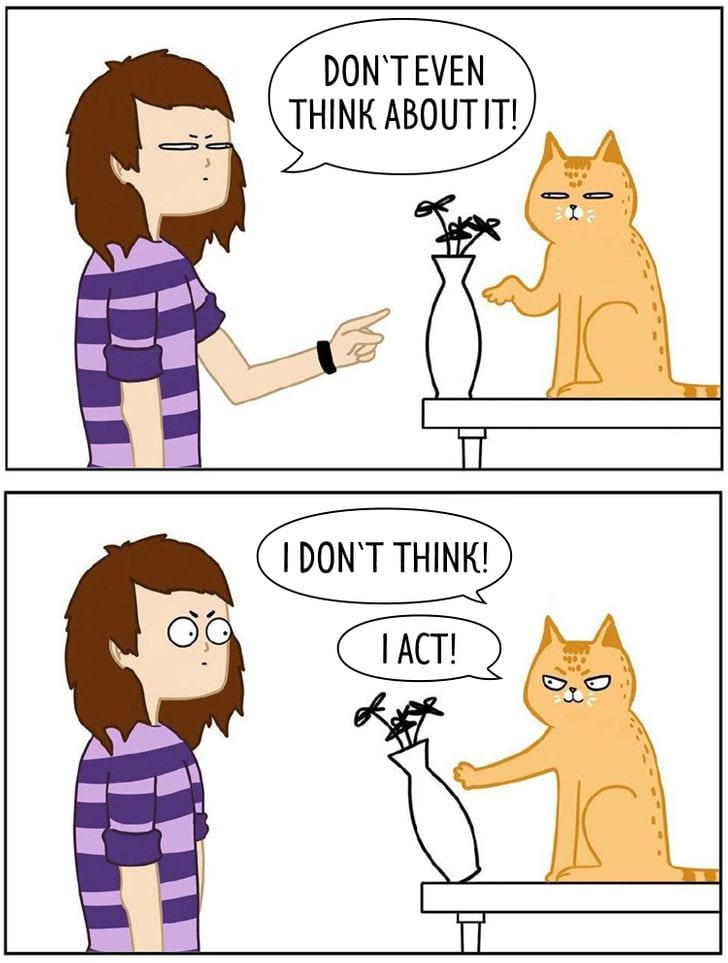 5. No matter how annoying they are, rule no. 1 is to always prioritize them over others. 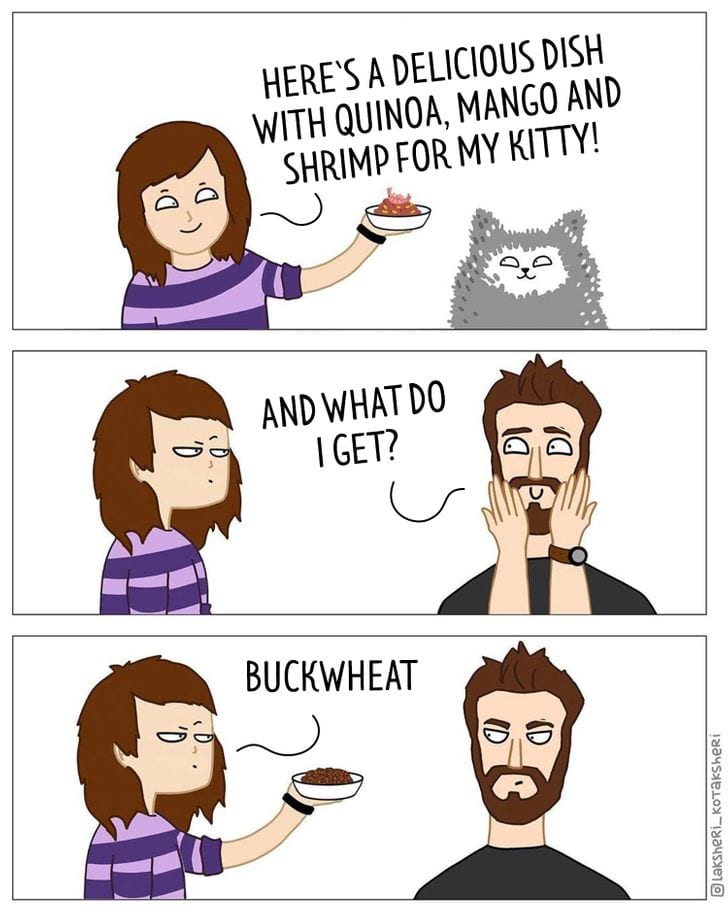 6. Their big dumb head can sometimes find it hard to stick to a decision 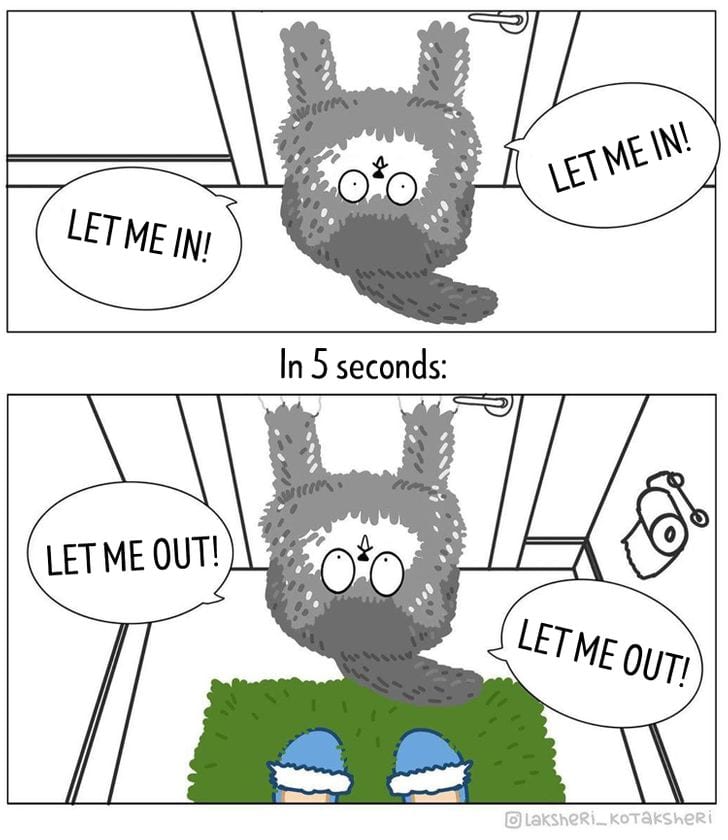 7. They only like being touched when they want to be touched. No other realities, whatsoever. 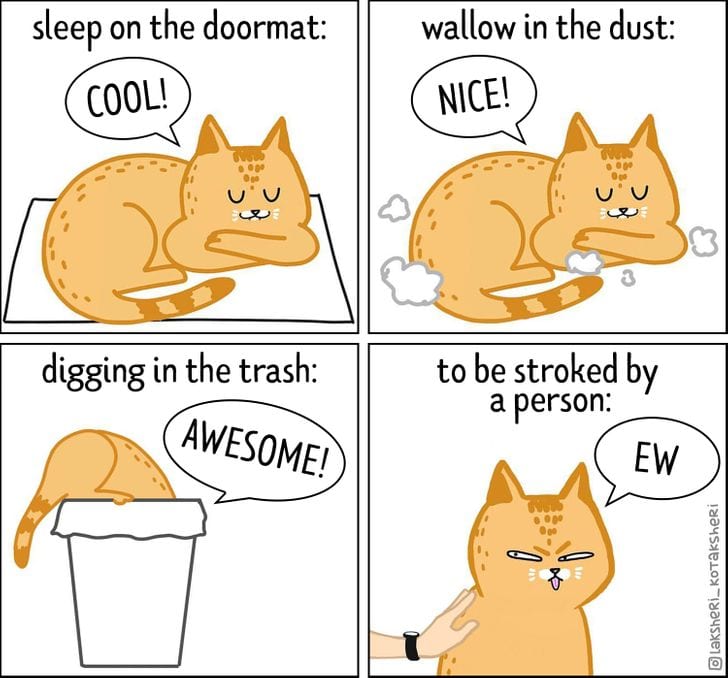 8. Being dramatic is a very old trait. 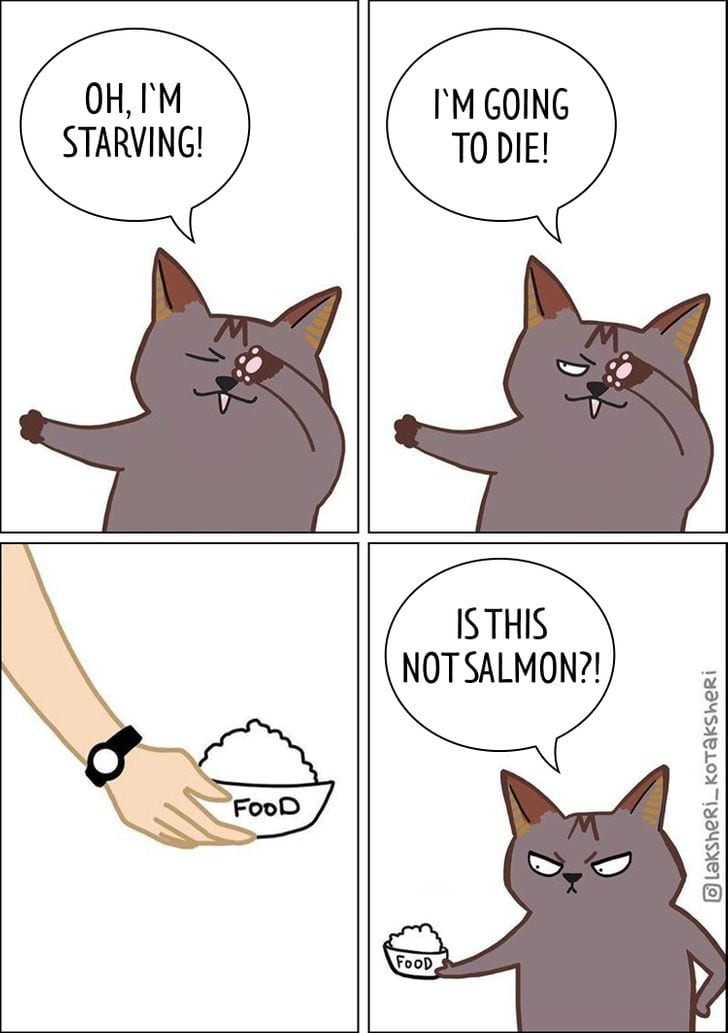 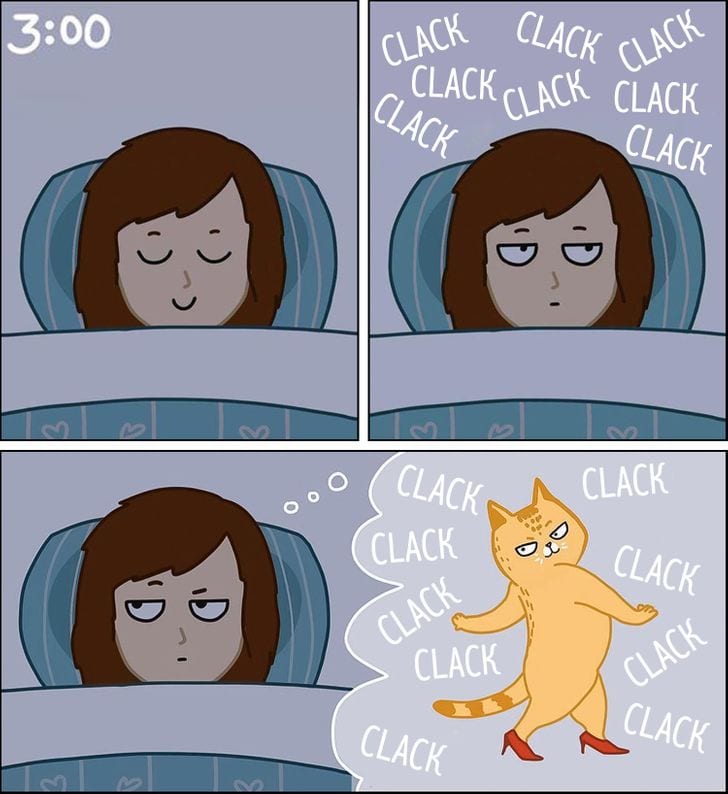 10. Cats being overly dramatic about humans taking baths instead of licking themselves clean 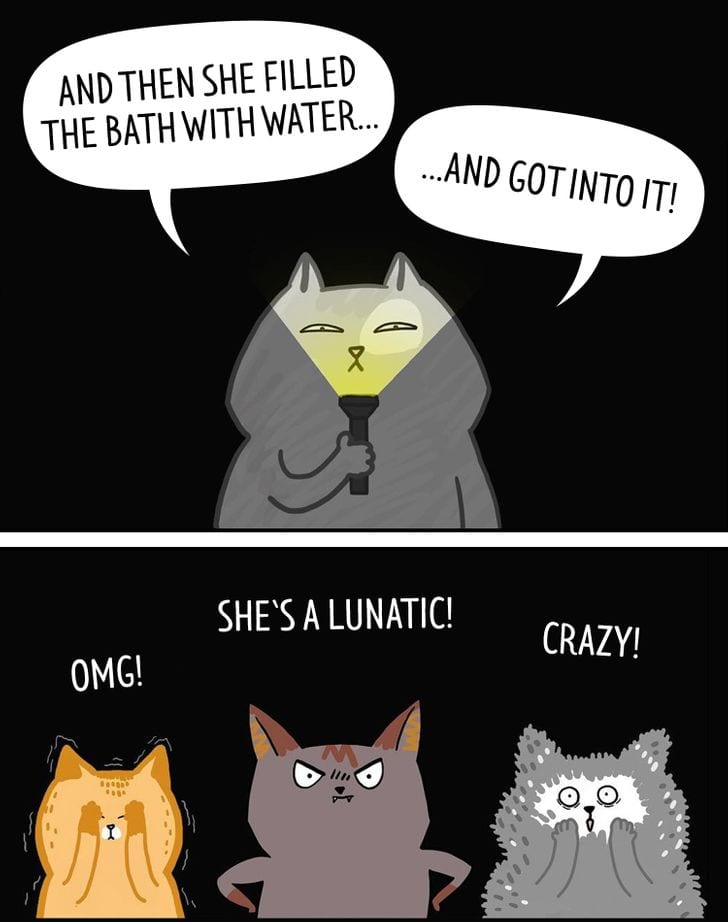 Some real good art, tbh. Laksheri has done a really good job in terms of the comics but in terms of achieving the purpose behind it… It is important for people to know that adoption is not an easy process. Compatibility takes time. And sometimes, even after compatibility, animals will always react the way they want to. We’re not saying that it’ll always be hard. But this comic is a very accurate representation of what could happen.

Regardless of the message behind this, they are super hilarious to read. We hope you’re having fun.

11. The nighttime fiasco has its own advantages. You’re never late for work. 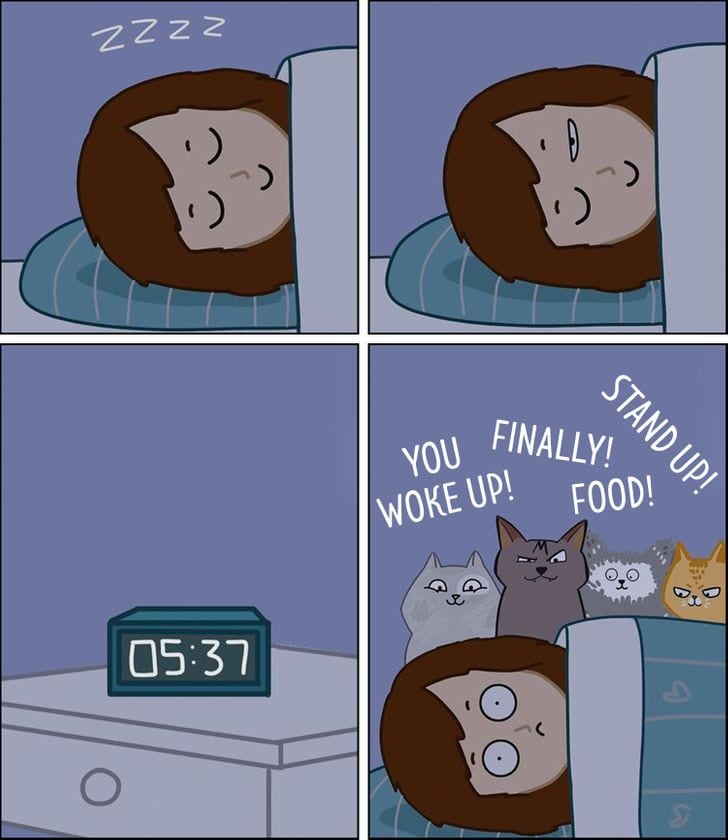 12. What we think and what they think can sometimes be totally different and unrelated. 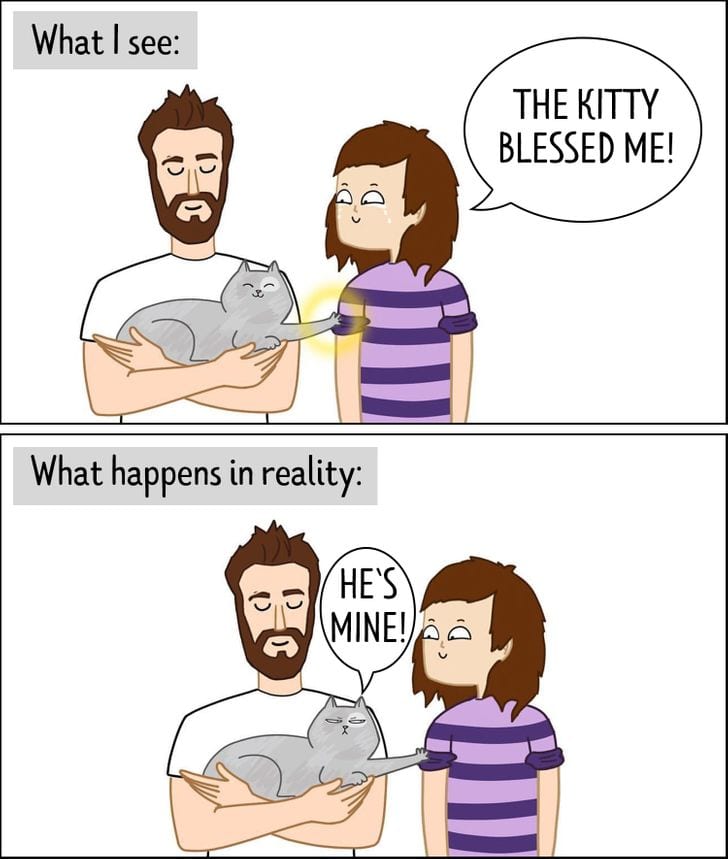 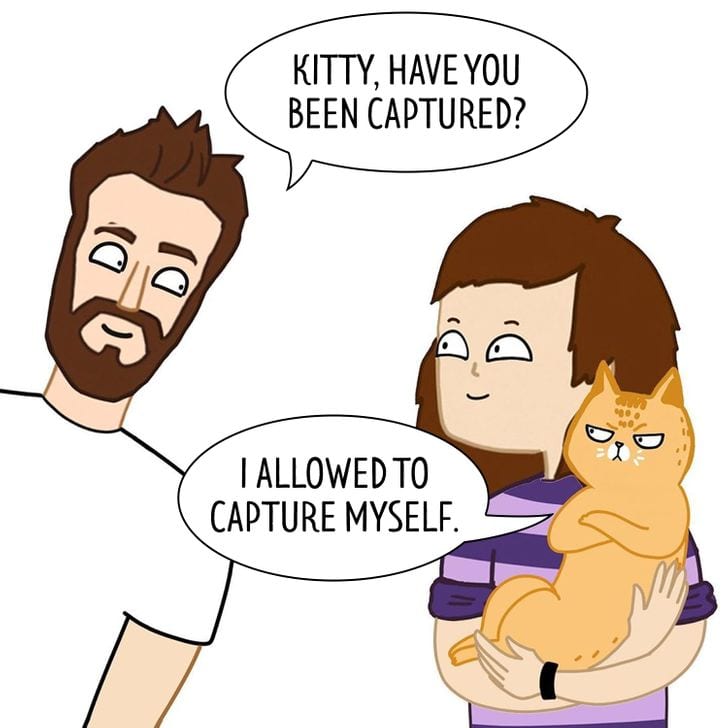 14. You can’t beat their egos. They are too full of themselves. 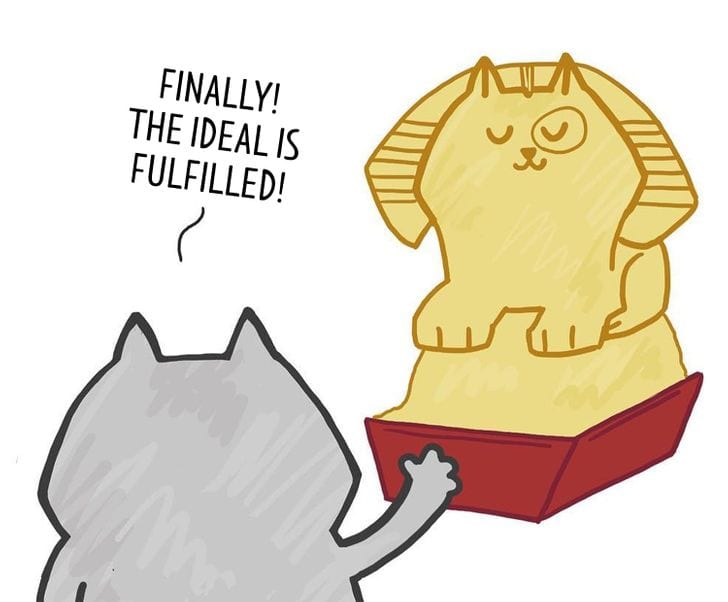 15. They are smarter than you when it comes to fiery responses 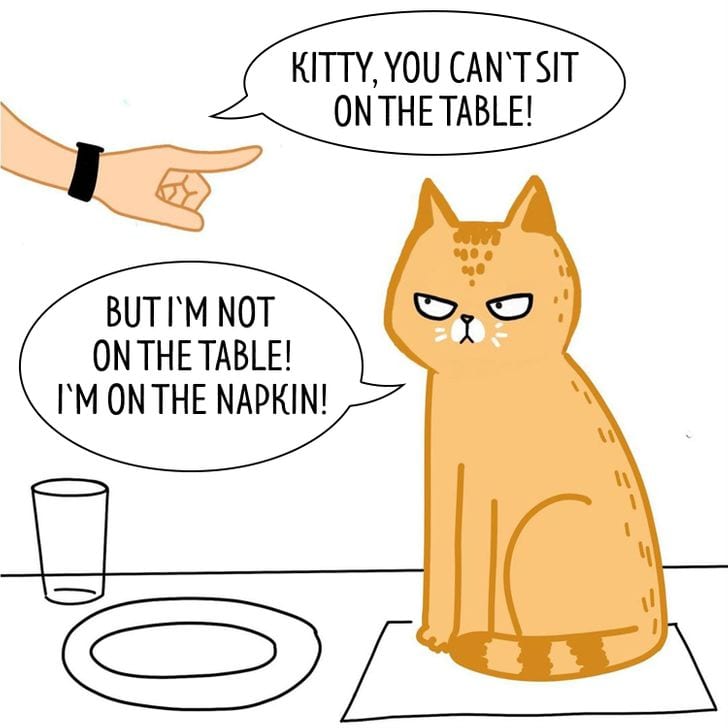 16. Your guilt is their opportunity 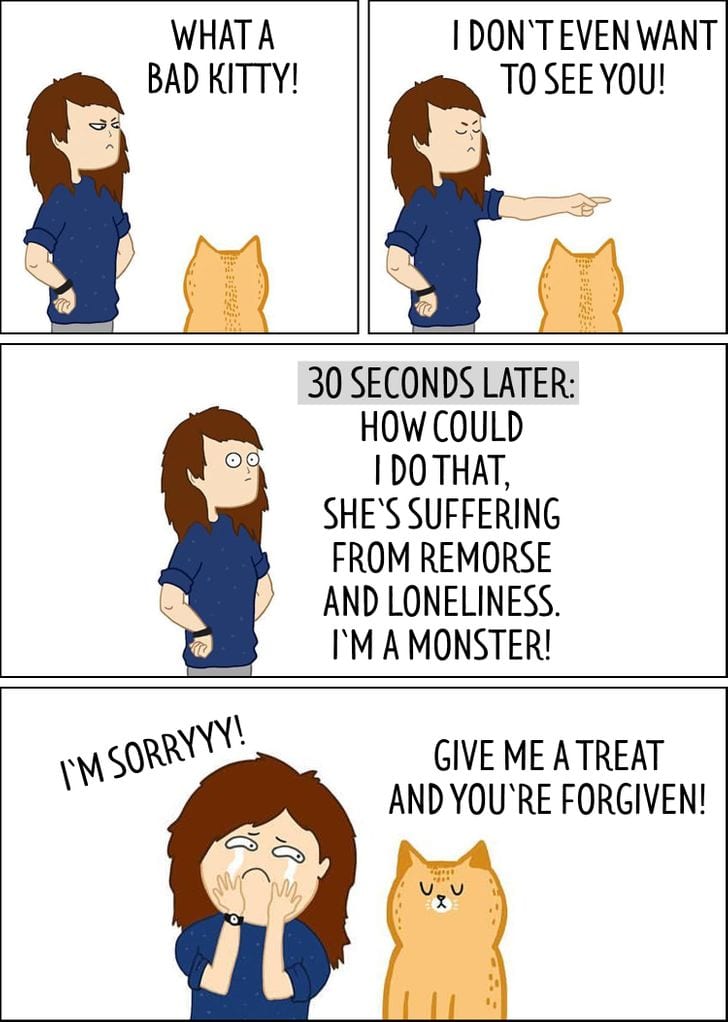 17. As long as they’re having a good time, they won’t even notice you’re away. Independent boi. 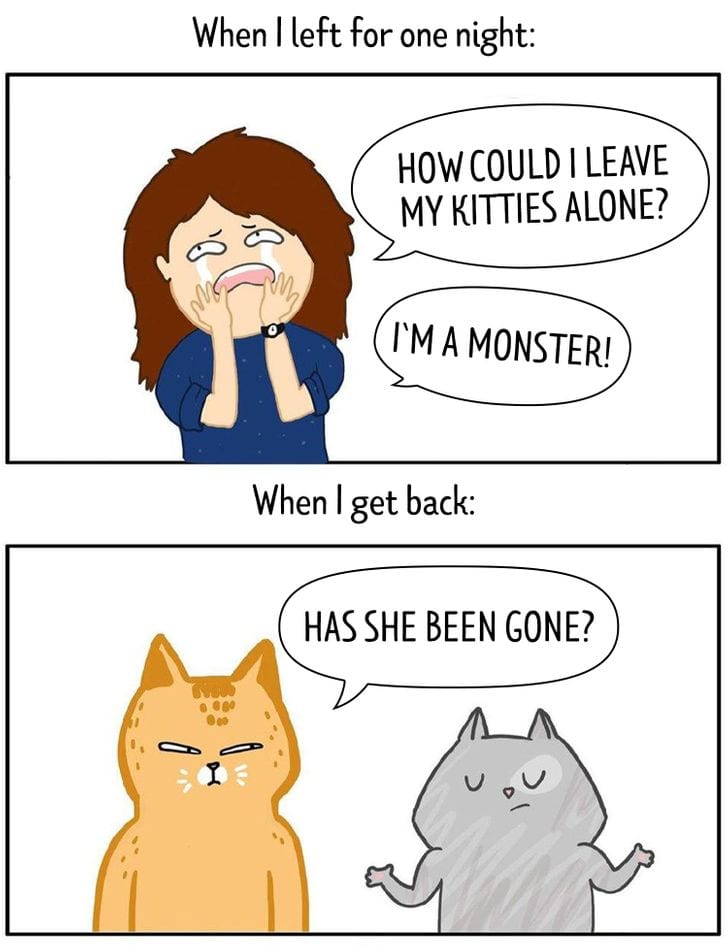 18. Make sure to get the same color shirts as your kitty’s fur, otherwise, these fur-bombs will ruin your entire wardrobe 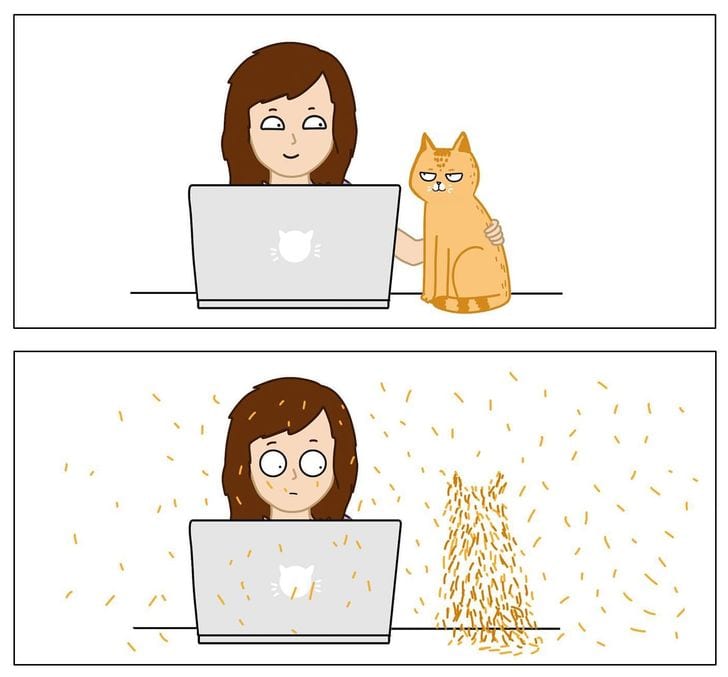 19. They are super honest about everything. They don’t care if they are being brutal. 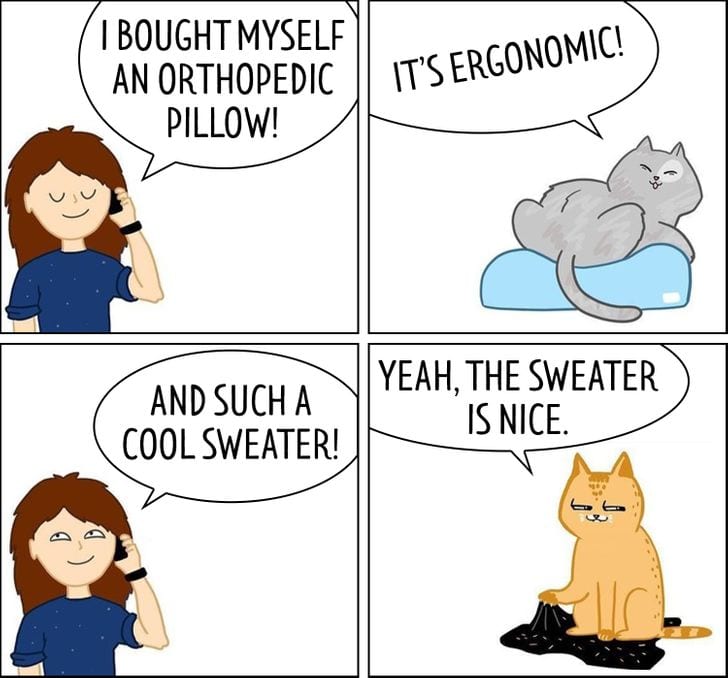 20. This expectation may never turn to reality unless of course, the kitty is sleeping 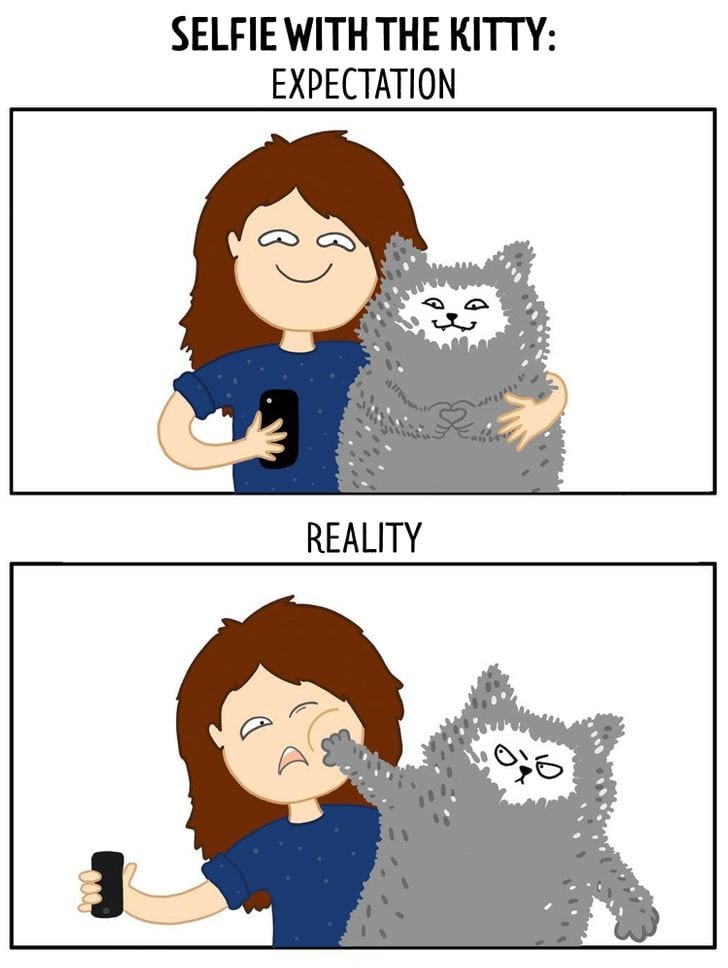 It really do be like that sometimes. A perfect representation and such a creative one as well. We loved it. Great job, Laksheri.

Can you relate to these comics? Let us know your thoughts in the comments down below. Have a purrfect day!