Being nice doesn’t cost you anything.

Honestly, it is one of the building pillars of being a decent human being but so many people tend to forget it. Being nice isn’t exactly hard and yet so many people completely fail at it. This is especially true when it comes to Karens all over the world. Not only do they feel like they’re entitled to everything in the world but they also think that they can walk over anyone they want. Well, they usually have another thing coming when it comes to stories like these.

I am sure we have all seen people like these who act like they know the owner of a restaurant and act rudely. Even if they know the owner, I don’t understand why it really matters at the end of the day. If they want special treatment, they really should try to be nicer to all the employees and they might just get it. So when this particular Karen came into this restaurant and acted like she was a celebrity, it didn’t really end well for her.

This is going to be one heck of a story so just scroll below to enjoy.

This is going to be a long one so just get ready for this.

We get a little bit of background information on how this business started in the first place. 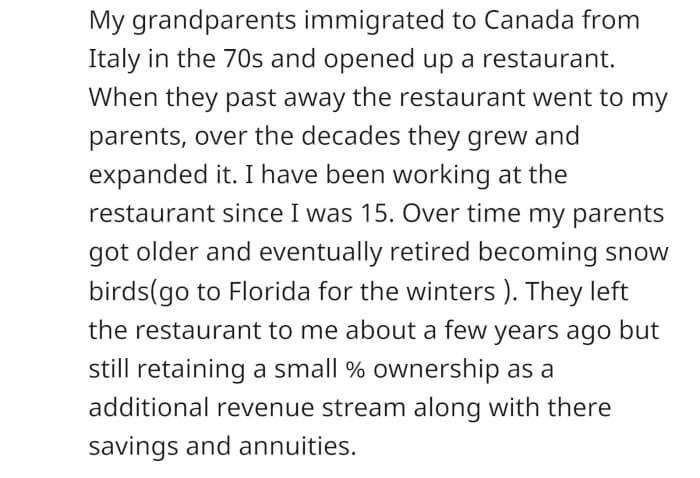 He made a lot of changes as soon as he inherited the place. 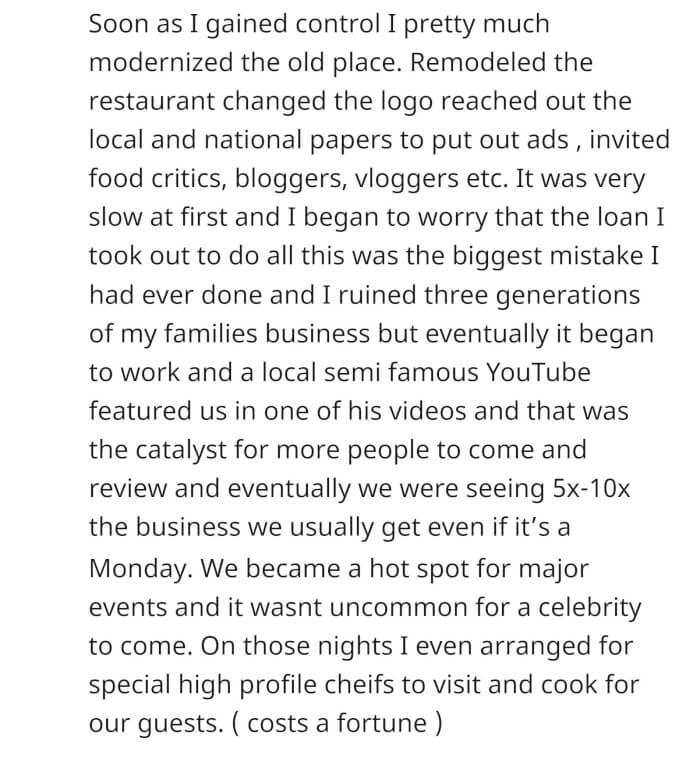 And while it was hard going for a while, they managed to pull through.

He is also quite dedicated to his restaurant and doesn’t hesitate to help.

A lot of celebrities also visit this place so it is quite popular.

But this time a group of Karens came in. 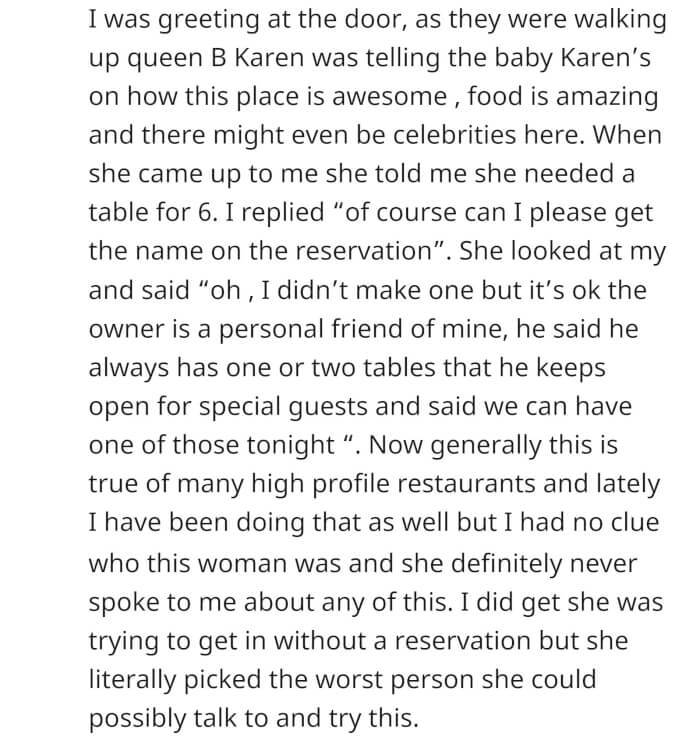 They clearly were not being nice so he had an idea.

They kept taking it further and their behavior was disgusting. 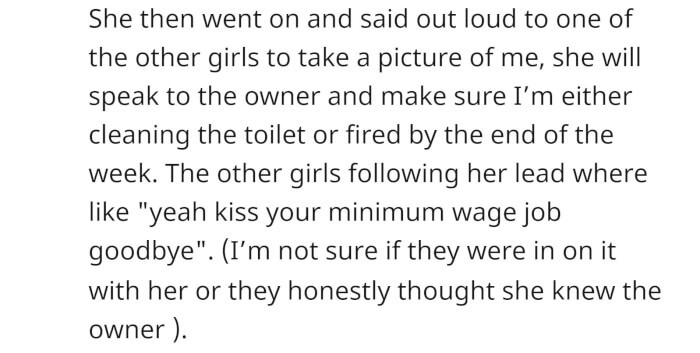 The head Karen was taking no for an answer. 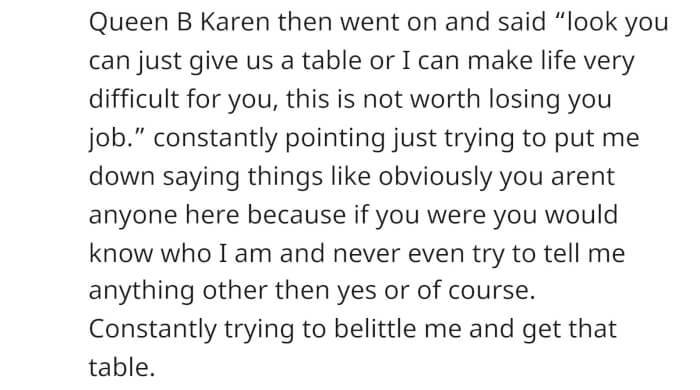 So he did what he thought was best.

He did end up giving them a table. 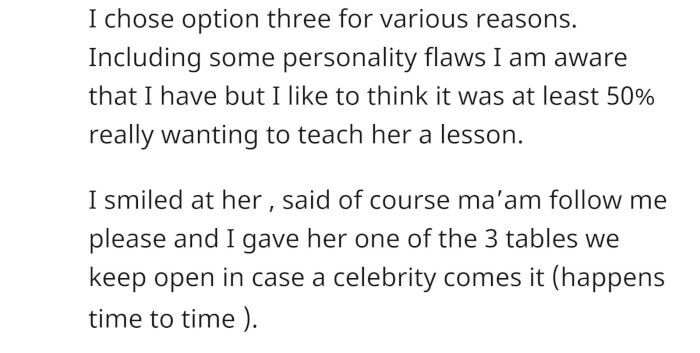 He got into the role of a waiter and got working on his plan.

They didn’t really know how expensive things were and ordered whatever they wanted. 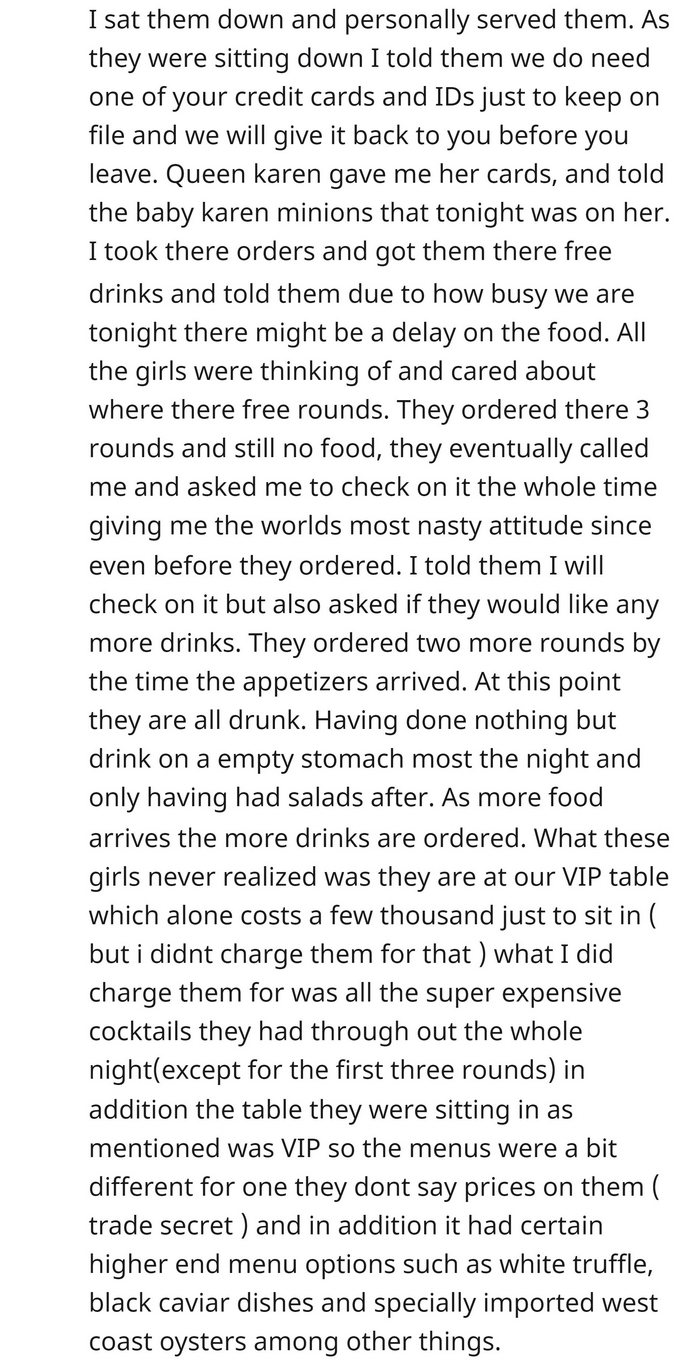 As you can imagine, it ended up being a lot. 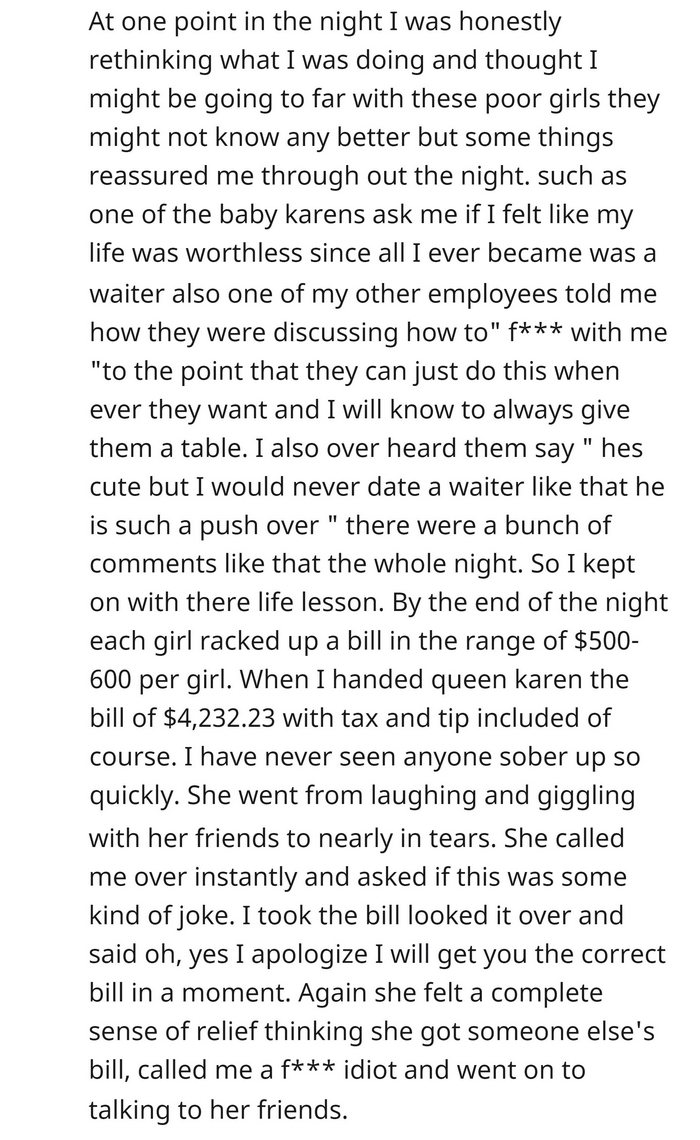 She only dug her hole deeper and she was in tears by the end of it.

I would feel sorry for her but she was horrible. 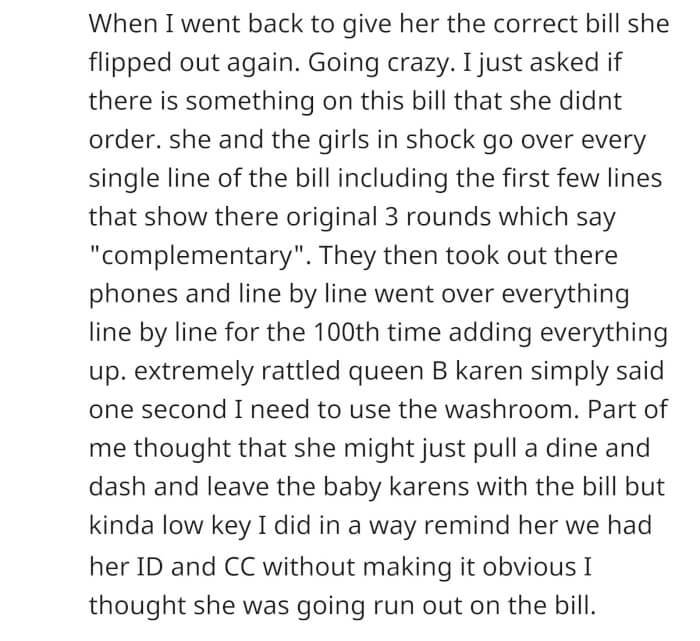 So she went to the toilet and made up a plan. 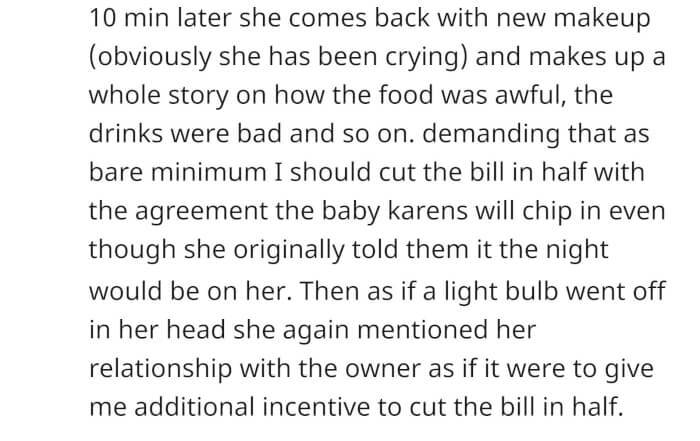 She really was trying her best to get out of paying this bill.

But it obviously did not end there as she came with her Father a little later. 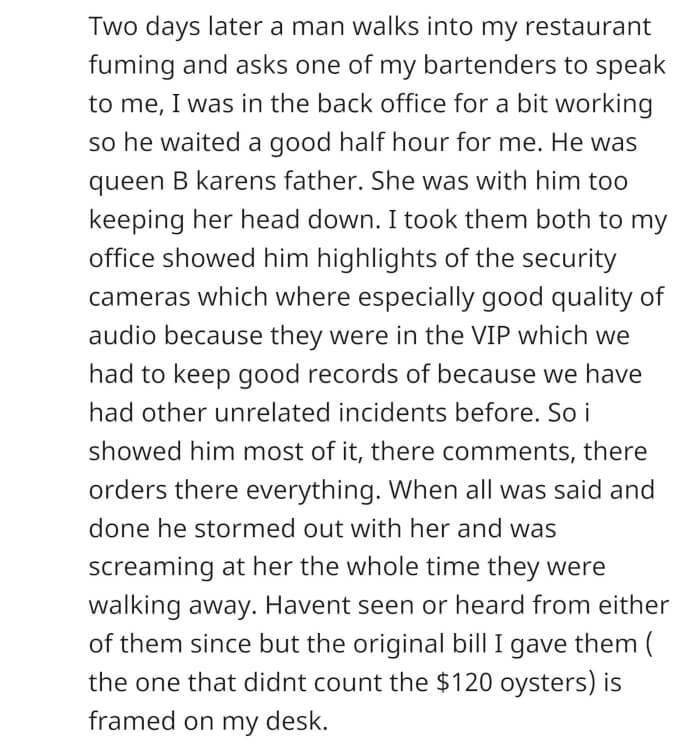 He didn’t lose any money over this so it worked out well for him. 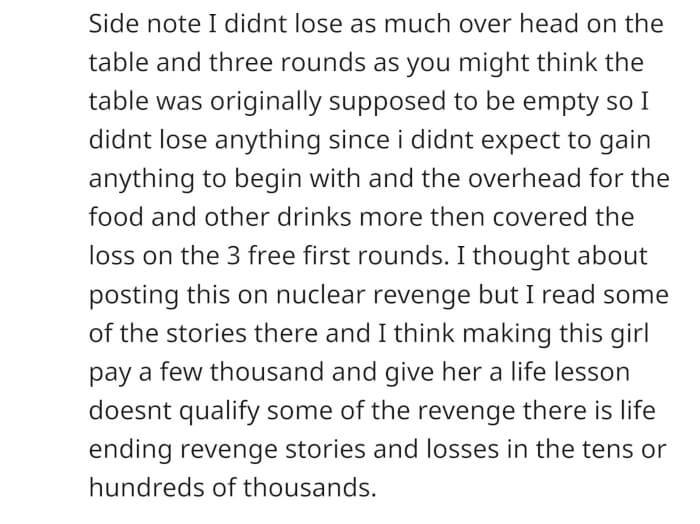 But not everyone in the comments believed this story. 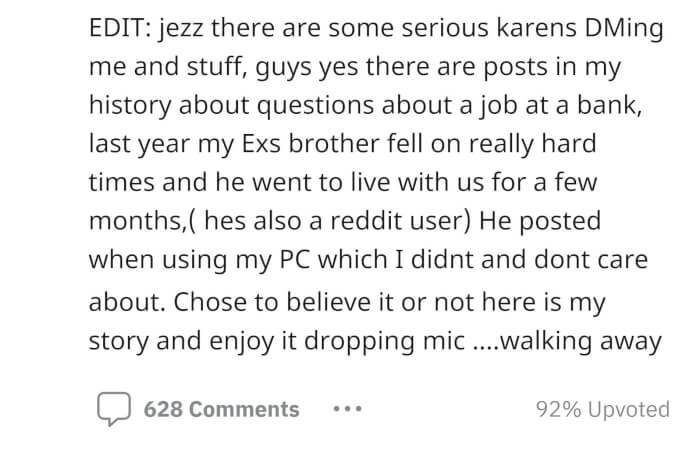 This story is not at all as surprising as it seems. A lot of people tend to do things like this just so they can get free stuff or special treatment. However, if they had just been nicer, he might have given them the table for the sake of it. But they decided to be complete idiots and dug themself in this hole. I also don’t understand why she brought her Father into the restaurant. Did she want to get even more embarrassed or had she paid for the meal with her Father’s card?

However, most people adored how he handled the Karens.

I wonder how the food tasted.

I do want to eat there as well but I really can’t afford that much.

I am glad that her Father called her on her bull.

She should have quit while she was ahead.

That would have been great but his plan was also quite good.

They did end up becoming celebrities.

Just to brighten up your mood, here is some cat tax!

Just look at those gorgeous eyes! They honestly feel like they are starting right into my soul.

What are your thoughts on this story? Have you ever seen something like this happen? If so, how did it end for that Karen? Did they get all that was coming to them? Let us know in the comments below and don’t forget to share it with all your friends so they can join in with their opinions as well.