We don’t always have time to do everything that we want.

I mean who wouldn’t like to spend their Christmas with their family and have a nice dinner? That sounds like such a nice celebration. However, we all know how this lockdown has affected everything. It is not a good idea to host big gatherings and then there are the workers in hospitals. They are not only at a higher risk of getting the disease, but they are also quite busy these days. We all know nurses have quite long hours that might not be planned sometimes.

So when this mother urged this nurse to host a thanksgiving dinner, she politely declined. Because of being so busy, she barely has time to sleep let alone cook for 10 people. However, this ended up angering everyone who apparently think it is a good idea to hassle an already tired nurse. But it doesn’t end there. The nurses husband was not supportive at all either and rather than agreeing with her, put the blame on her.

You can see what happened next by scrolling below.

Economy these days is terrible, and it has been affecting everyone. 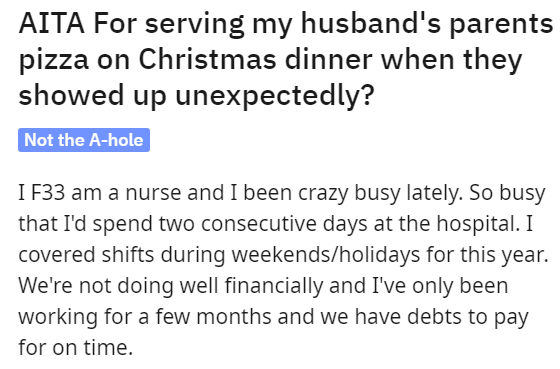 It’s not about her cooking a decent meal, she is clearly very busy. 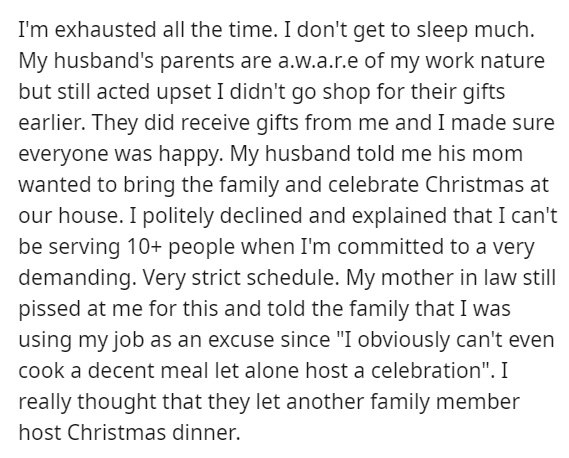 However, they did let things go and decided to drop by unannounced. 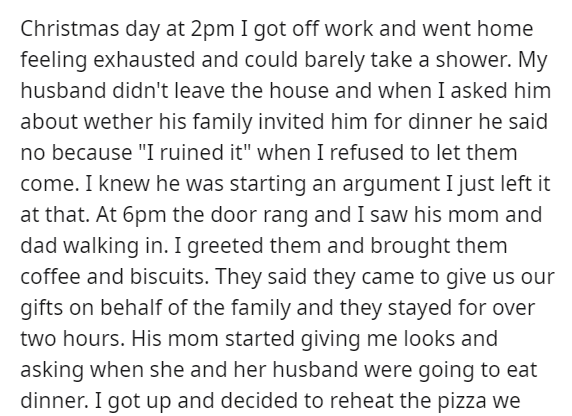 Starving the husband? What is she talking about? 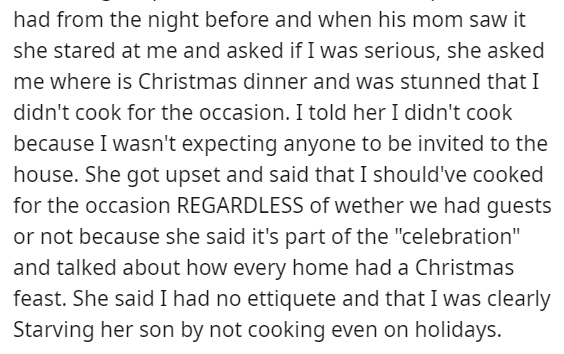 Lock of function as a wife? I wasn’t aware it was a wife’s job to host Christmas dinners for the whole family.

If he wanted to have that dinner so much, he could have cooked it himself. 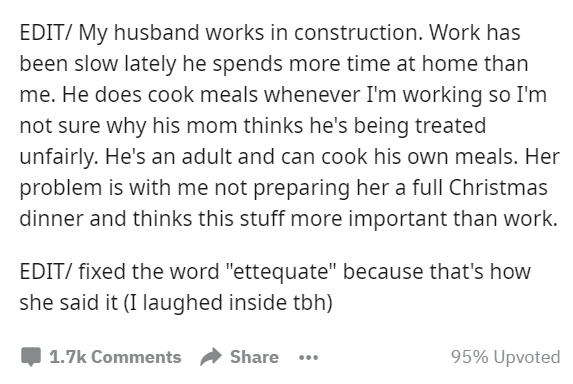 He clearly thinks his mother was in the right. 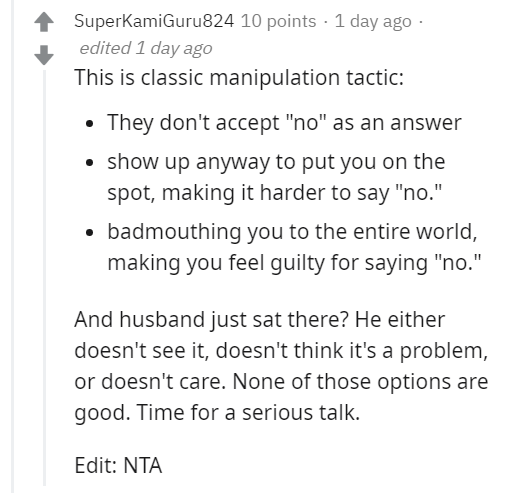 I thought me thinking to break up with him was harsh but nah seeing that everyone else is on the same wave with getting rid of him and his family I feel like it’s the best call, if he wanted his parents to have dinner or if he wanted dinner he could’ve made it himself and treated his parents they’re nothing to her at the end of the day just a couple of in laws, she should really leave him! –catmom428

And yet these same people get angry when a nurse isn’t immediately available in the Hospital. 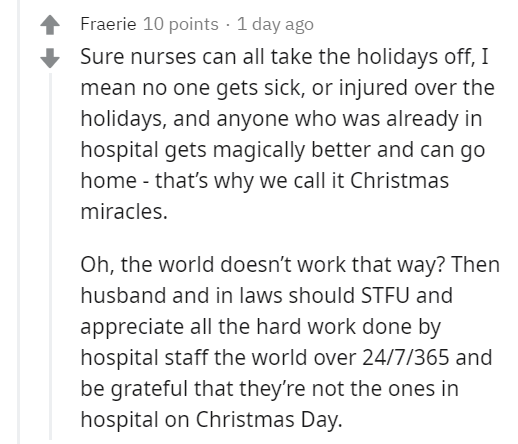 The mother-in-law was definitely in the wrong, but the husband didn’t help either. 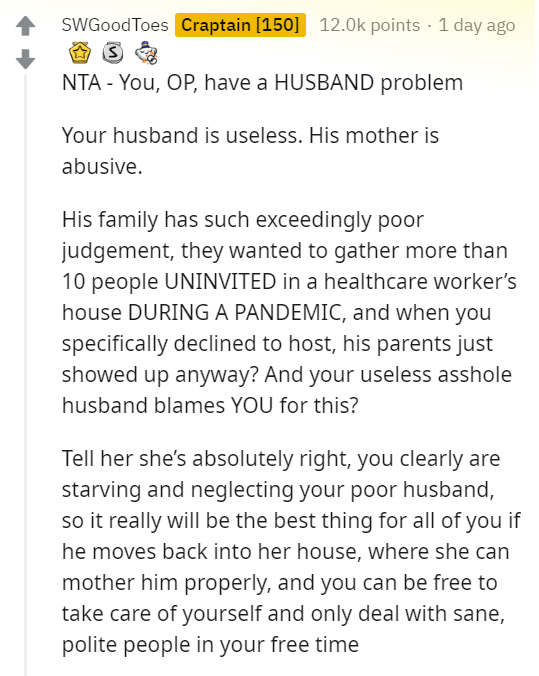 He is not a little kid who doesn’t know how to turn on the stove.

The mother-in-law is clearly a very stubborn woman. 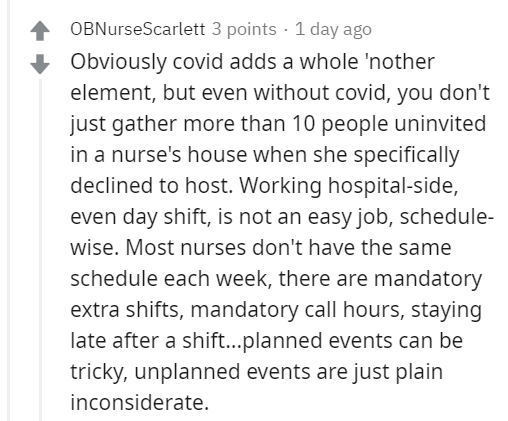 Telling them to go pound salt is the way to go. 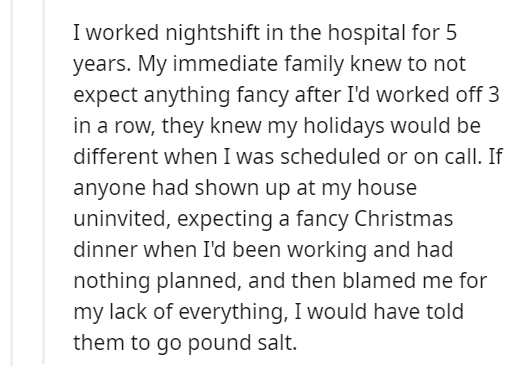 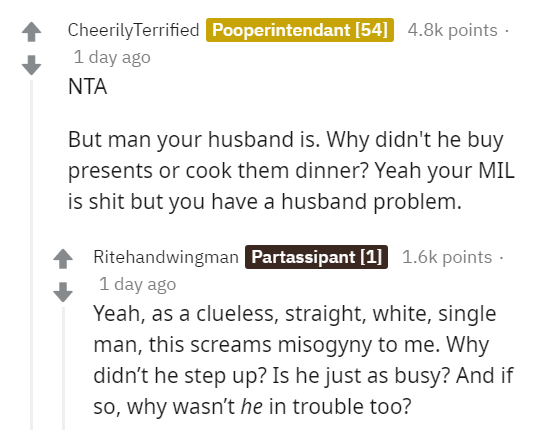 This is really something people should look out for when dating – how does your partner interact with their parents, and how do they feel about that dynamic? You don’t find out years into your marriage that your partner is lazy and expects you to be a sort of care taker.

There are always warning signs. Pay attention to them. You don’t have to have an awesome parent to be an awesome partner or anything, but there’s a lot to be learned about the relationship your partner has with the people who raised them. –MyAskRedditAcct

What do you think the husband should have done in this situation? Let us know in the comments below.