Ah, yes. Olive Garden. The American-Italian chain serving people in the United States and around the world since 1982. For anyone who doesn’t know already, Olive Garden is basically an Italian restaurant famous for its breadsticks and infamous for literally everything else. According to the critics, what Olive Garden usually serves is anything but Italian cuisine. It’s as if they just “microwave frozen food” and dish it out for their customers.

However, this isn’t necessarily true for the entire chain, but only for a couple of their restaurants. Most notably for the one in Times Square, New York. Not only do they serve food that tastes nothing like Italian-cuisine, but their prices are also very high. Which is somewhat understandable because it’s located in Times Square. But that’s the exact same reason which confuses everybody. Like, why would someone who’s in New York choose to go to a place they know doesn’t taste right when they have so many other options? Tourists are an exception, but the people who live there? It doesn’t make sense.

Maybe, it’s the breadsticks? People love them so much that they can’t resist. Maybe, the New Yorkers are just dumb and rich who don’t care about spending money? Or, maybe there’s more to Olive Garden than we all think? Who knows? Luckily, for us, a Twitter user shared a story about going on a date with an Olive Garden manager. And, boy, was their conversation something! Read the Twitter thread below to see what is so special about this place.

The world is definitely a small place. 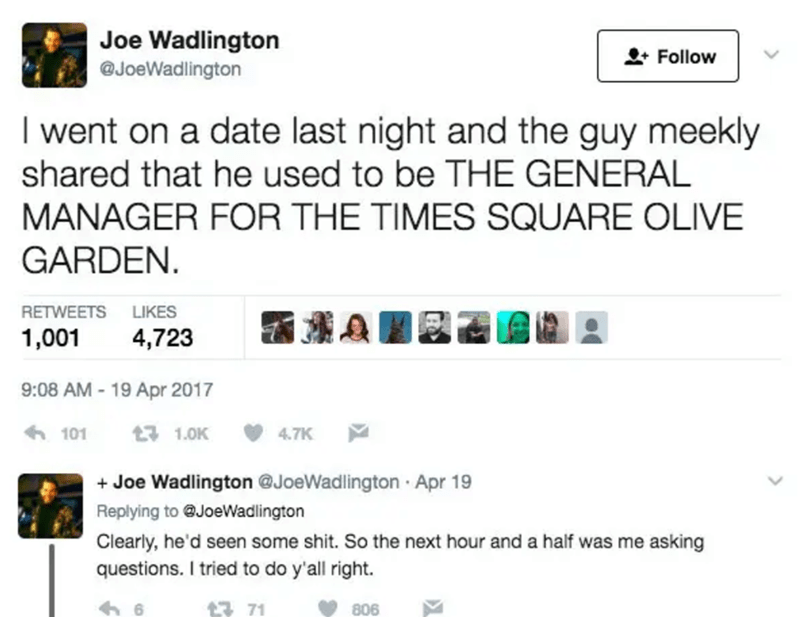 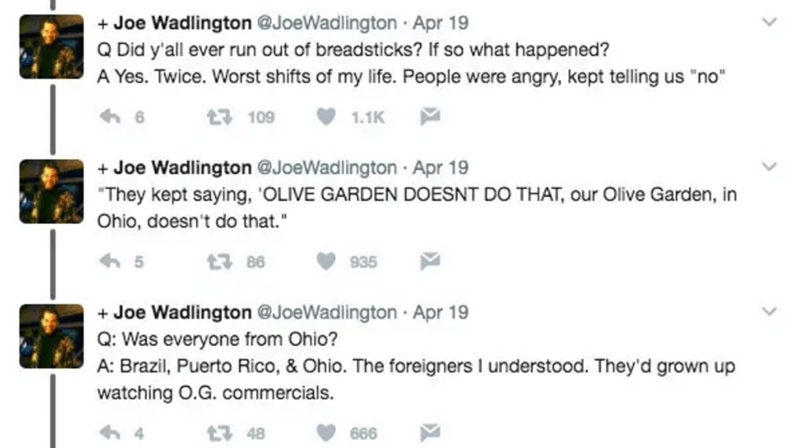 Now, we don’t see this every day. 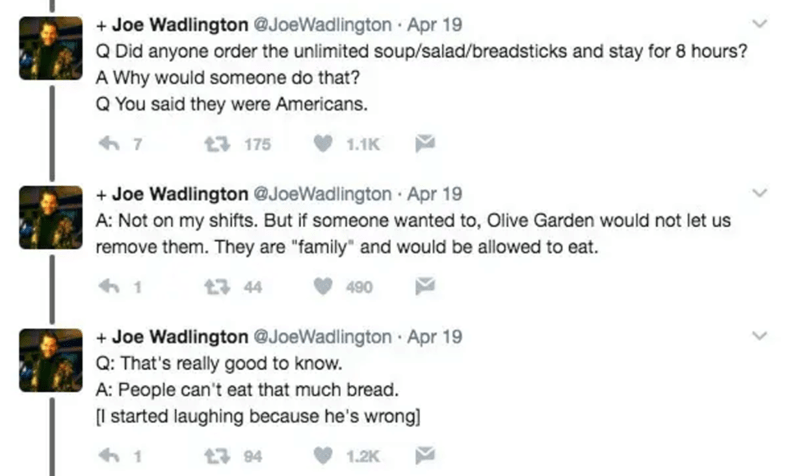 The OP is definitely right here. Breadsticks are no joke. There’s probably nothing in the world that can take their place. There’s a reason why it’s one of the top appetizer choices. It’s made in so many different ways with so many unique flavors. We’ve got cinnamon, cheese, garlic, pizza breadsticks and so many more. I mean, who can ever say no to them? 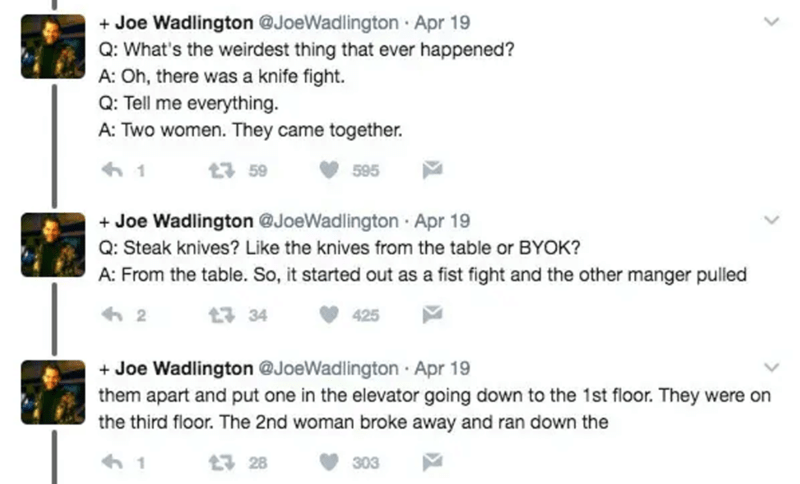 Okay, what the f*ck is going on at Olive Garden?! 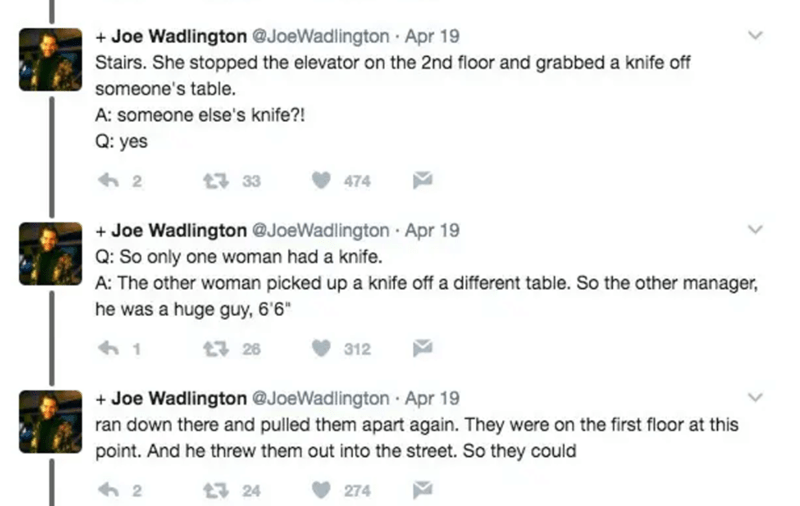 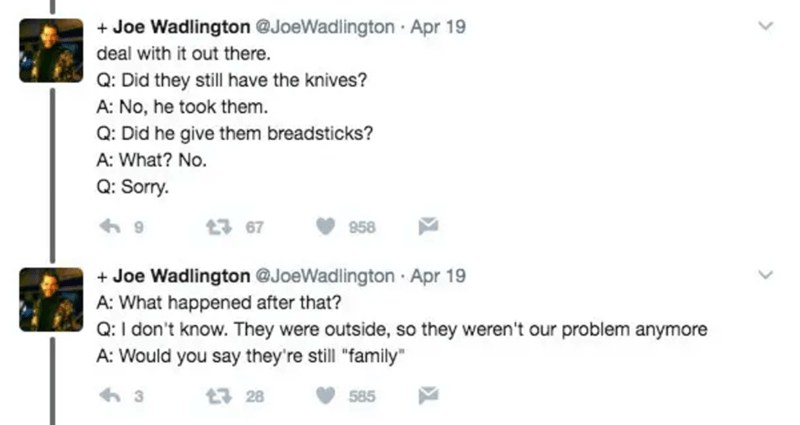 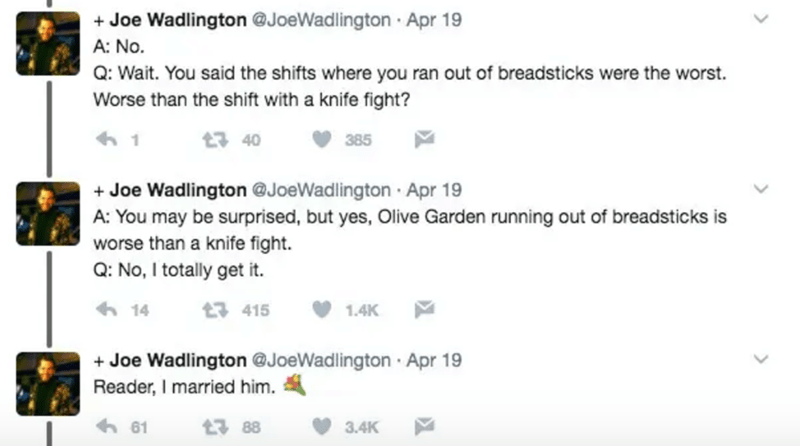 So…basically, it’s not just the breadsticks. There is a whole lot of sh*t that goes down at Olive Garden, Times Square. No wonder why the locals go there even after knowing they can get better food elsewhere, that too, at a much cheaper rate. It’s just the vibe and the whole environment that attracts everyone towards this place.

But even so, we can’t ignore the fact that their breadsticks are magical. I mean, if a shortage of breadsticks at Olive Garden is more scary than a knife fight then you can safely say that those breadsticks are unlike any other you’ve ever had in your life. So, will you be going to Olive Garden? That too, in Times Square, New York? Leave a comment in the box below and share your thoughts with us.