This is why not drinking in solidarity with your pregnant wife is a good thing.

And that is exactly why so many people do this. It shows that you do feel some sort of empathy towards the woman who is carrying the child that you both created. I am not saying you have to stop drinking the moment you realize your partner is pregnant, but you probably shouldn’t drink the night your significant other might have to go to the hospital. Doctors can usually tell you when the child will be due so most people have plenty of time to plan ahead and get ready.

However, this genius man decided to get p*ss drunk one day before he was supposed to take his wife to the hospital. Not only is it very irresponsible, but I can’t imagine what his wife was going through. Thankfully, she was able to drive the car herself through the contractions and the unimaginable pain. I am honestly surprised by the initiative this woman showed throughout her pregnancy and birth.

Although, the guy does understand he f**ked up big time. You can read the whole story below.

This is an old story of when these two gave birth to their first child.

Why would anyone celebrate this with a whiskey? Wouldn’t wine have been a safer option? 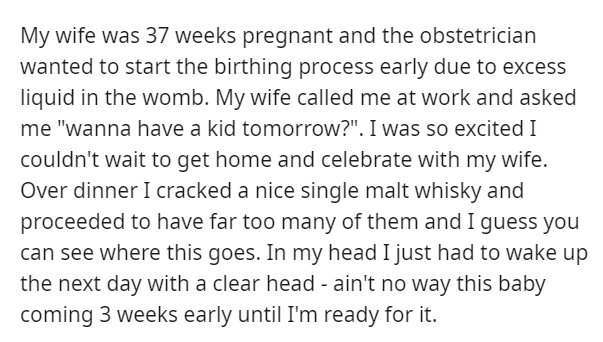 She knew that the ambulance would probably cost a lot, so she opted to drive herself. 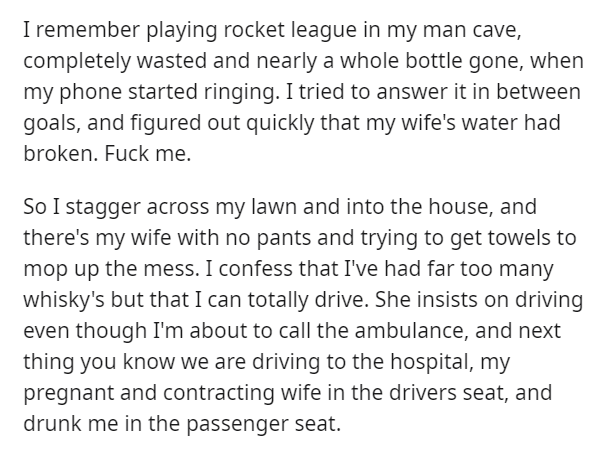 I would never recommend driving when you are drunk, but I am glad he managed to help somehow. 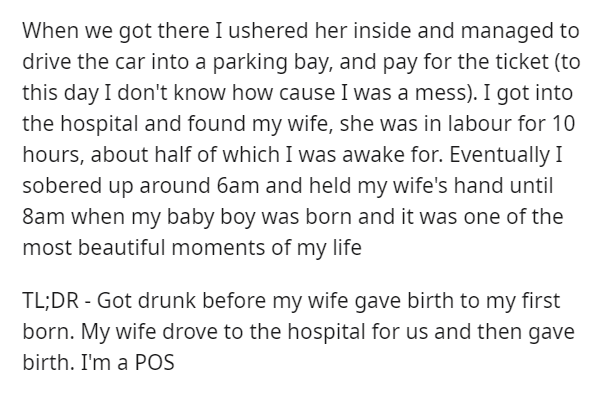 I am actually surprised that she wasn’t angry at you for doing this to her. 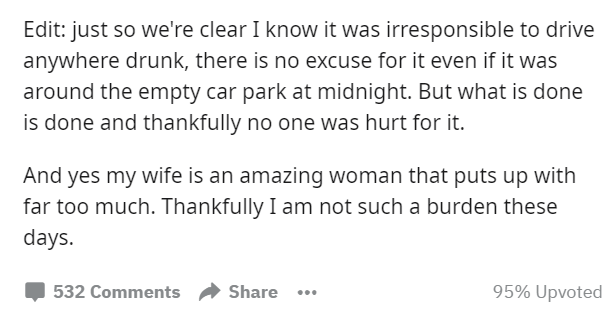 At least he learned from his mistakes and that is all that matters.

That is what this Subreddit is for though. 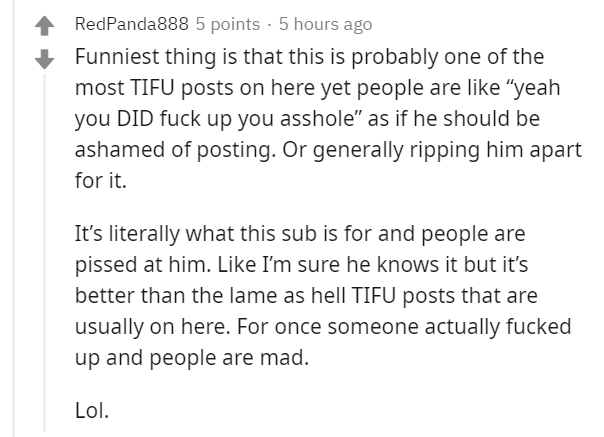 I can see that this sort of thing clearly happens a lot.

Well, that must have been a wild ride of a pregnancy. 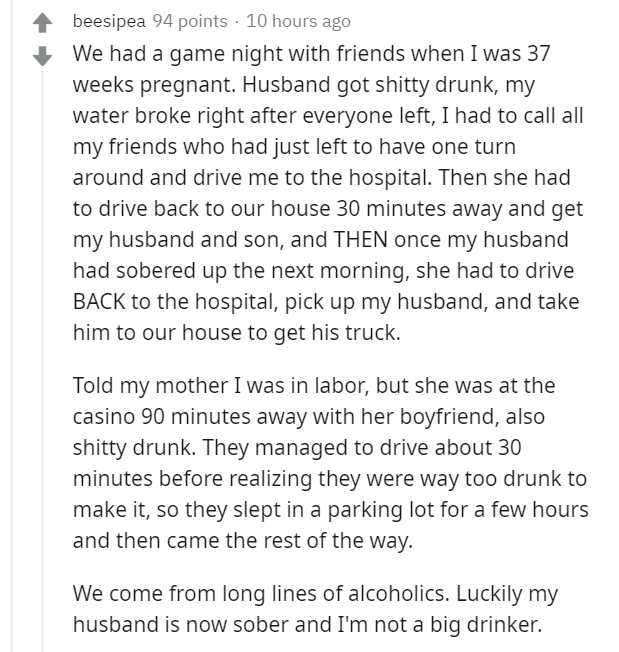 That is never the correct response when someone tells you their water broke. 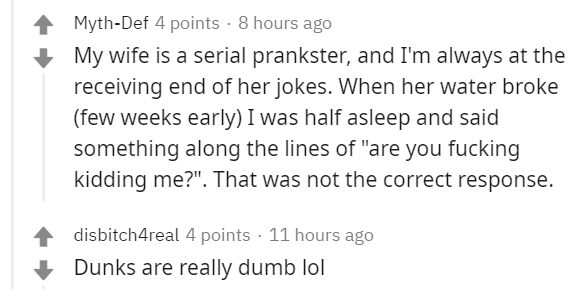 And this is the health system explained in a nutshell. 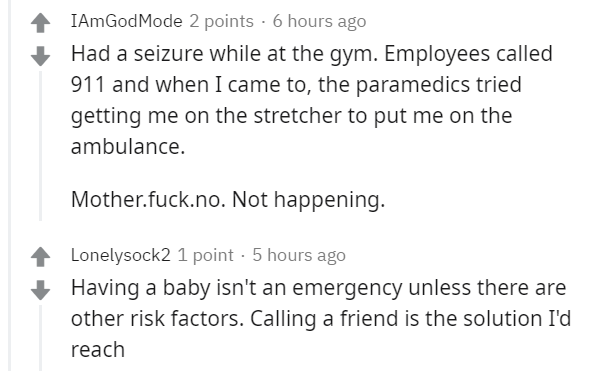 I can finally understand why some women don’t want their partner in the room with them. 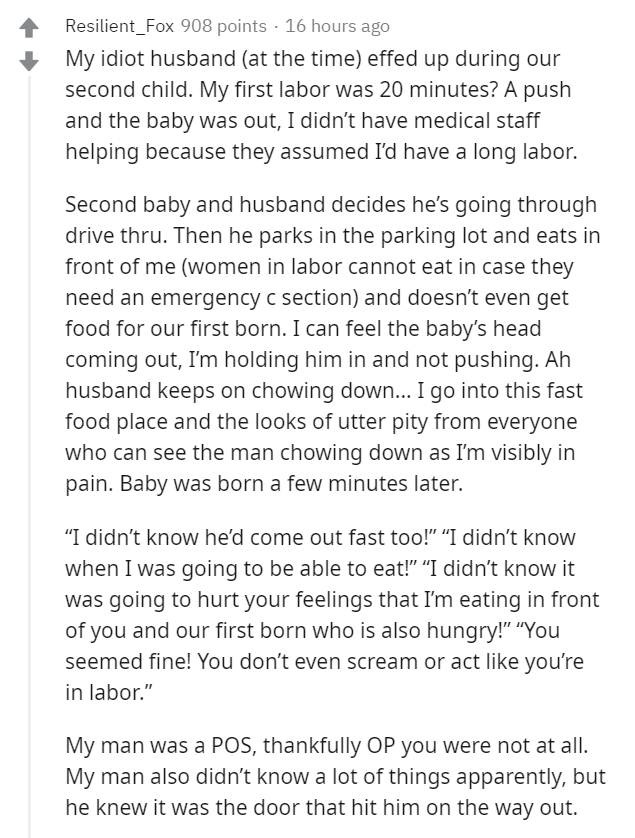 Even though it’s been more than five years since your FU, be diligent in your relationship with your wife. Even better, stay sober and celebrate future arrivals AFTER they arrive!

When my daughter was born, my ex-husband was with me every step of the way. By the time I went through my pregnancy with my son, my ex-husband had a full-blown gamboling addiction. When my labor started, he thought it would be a good idea to head to Las Vegas and play the slots. I was utterly furious with him. While in labor, two minutes apart at the time, I drove myself to the hospital. With less than an hour before my son was born, he shows up as if he was rushing in from an important engagement. I was utterly furious and didn’t even want him there. It really wasn’t long after that, that I found out he was cheating on me as well and his side piece was also pregnant. Needless to say, this is why he’s my ex.

Eta: I read more comments and saw that you indeed have been far more present in their lives (wife and kids!) Congrats! –remclave

That is one way to test your partner but a little too late, isn’t it? 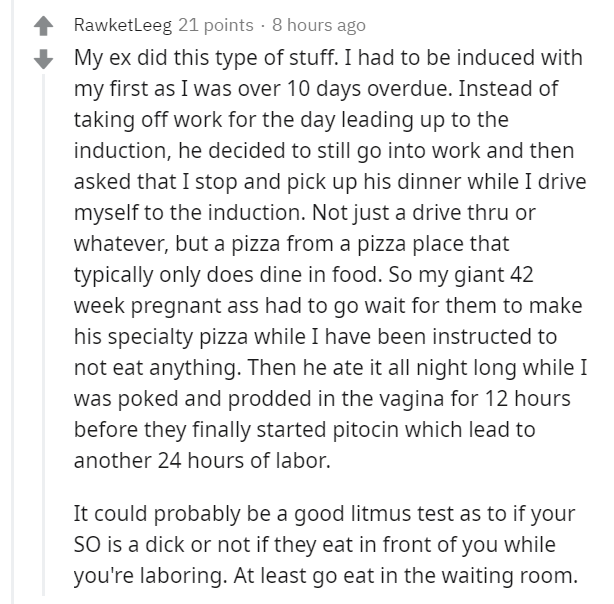 Everyone makes dumb mistakes the first time around from what I hear.

Comment down below and let us know your weird experiences or the way you messed up during your first pregnancy.