Never look a gift horse in the mouth.

That is one thing that we learn when we are very young. And it applies to most if not all scenarios that we go through in life. I am sure you have accidentally been served a bigger portion of food or drinks at least once. And usually, we don’t like to complain about it. What I have also learned is that food portions are smaller than they should be.

Have you ever looked at the back of crisps and seen that it serves two when it should be barely enough for one? Well, that can also sometimes happen in restaurants. More food is always more food. However, the restaurant can’t be expected to give it out for free. And unless you are completely sure that it is different than what was said in the menu you should not complain.

Apparently this guy didn’t get that memo and proceeded to do just that. Let’s just say it didn’t end well for him.

Honestly, that sounds like a fun night to me. 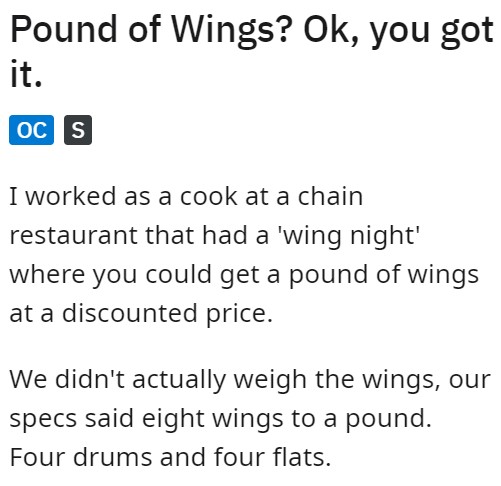 Nobody likes the guy who complains about having less food than what ‘he paid for.’ 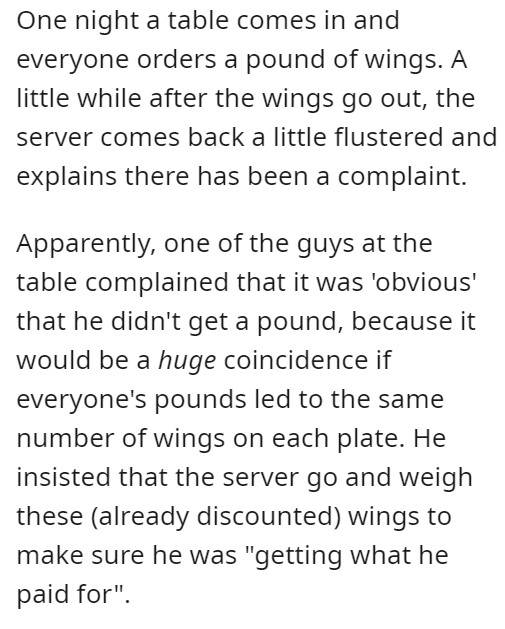 This is why you don’t mess with a chef, they will put you in your place if need be. 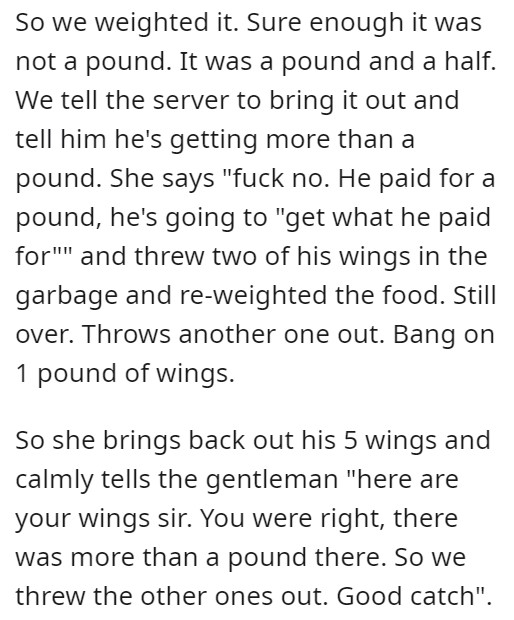 If he had just been nice the first round. None of this would have happened. 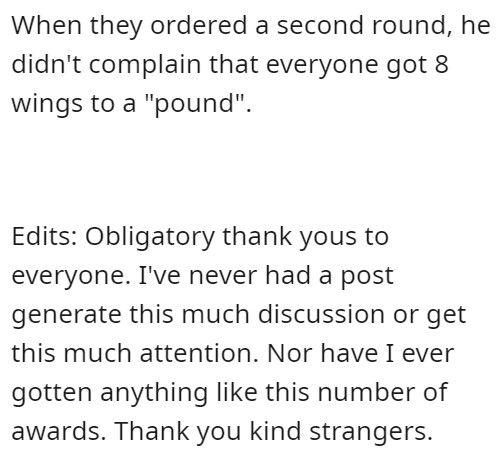 The Reddit user also provided a bit more details on what was happening behind the scene on wing nights. 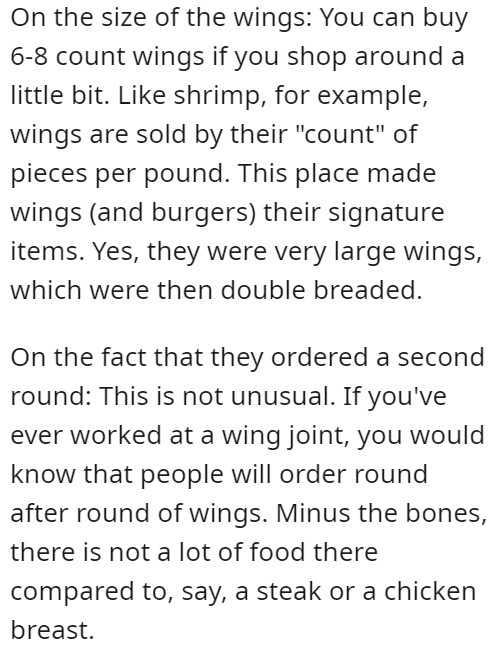 I don’t think the workers wanted to eat food that was on someone else plate. 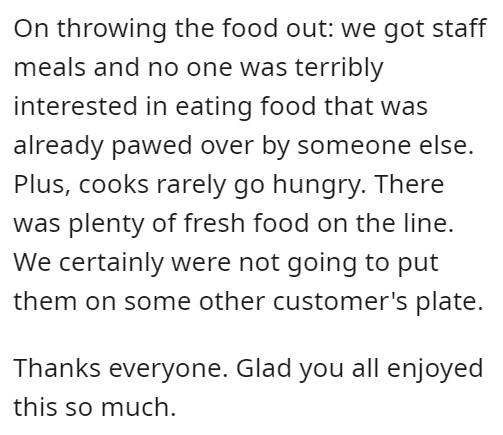 Many comments had their own stories to share about their similar experiences. 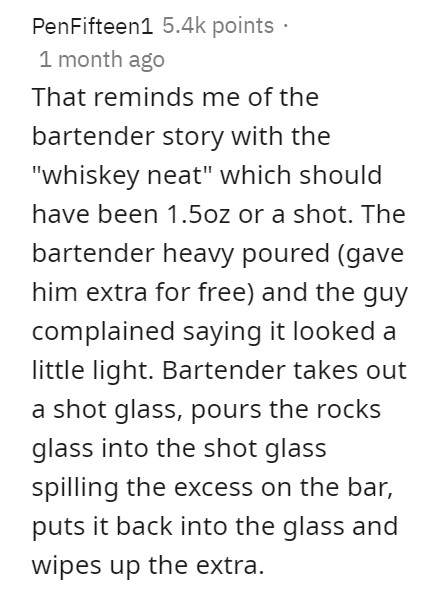 I would get that a lot when I was a bartender, we used some pretty wide rocks glasses (iirc they were 16oz Manhattan glasses) so a single neat looked really short.

I would always pour pretty heavy to try and mitigate the visuals of it, so when people would complain that I didn’t pour enough I would say “Look, if you want me to measure it out exactly you’re gonna be sorely disappointed” –CptHampton

Her lack of experience meant more drinks for you! 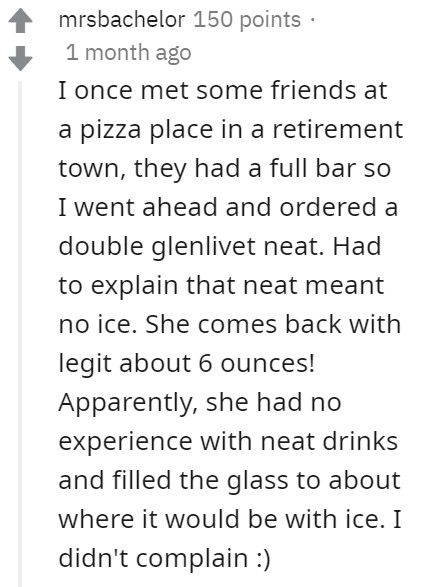 You also don’t want to mess with a bartender. They are unsung heroes. 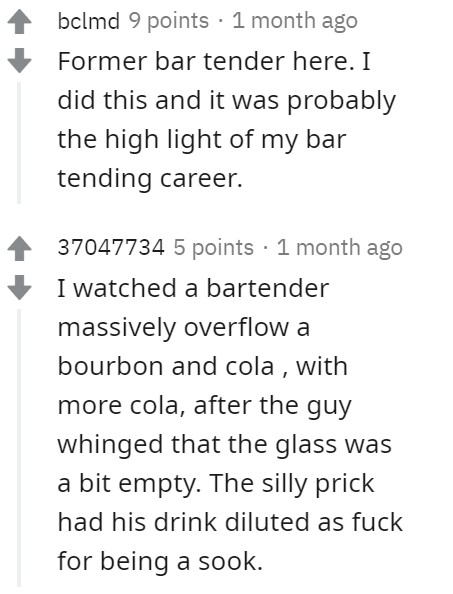 Now, I want to go to that restaurant. 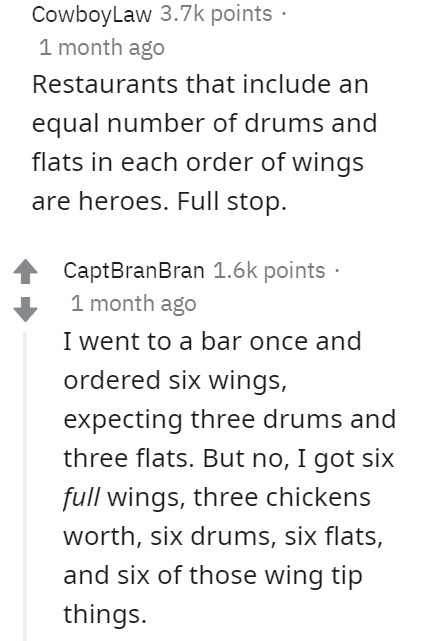 What would you have done in this situation? Comment down below and let us know. Don’t forget to share with your friends as well so they can join in the conversation as well.