Tampons are supposed to go in the bathroom.

Having periods is a normal biological function and should not be made into a taboo. Neither should women feel the need to hide this simple thing just because society tells them to do so. I am not saying, you should talk about it every chance you get or deal with it in a way that is unhygienic but most females I know are quite discreet when disposing of their sanitary products. However, it is very common to keep these products in the bathroom since you never know when you will need to use them.

But we have read many stories where girls are made to feel ashamed because of a very natural process that most women go through. We see time and time again that menstruation is talked about like it is some disgusting thing or inconvenient for the people around the women as depicted in this story. Although, this particular story is quite different than what you may have read before.

You can check it out for yourself by scrolling below.

She starts by explaining how her tampon box is quite non-descript. 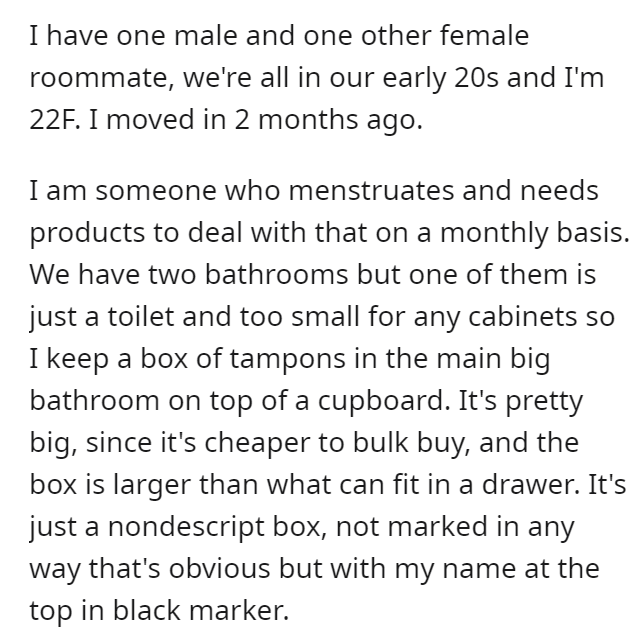 However, her male roommate seems to think that the whole thing is gross and she needs to find a new place for the box. 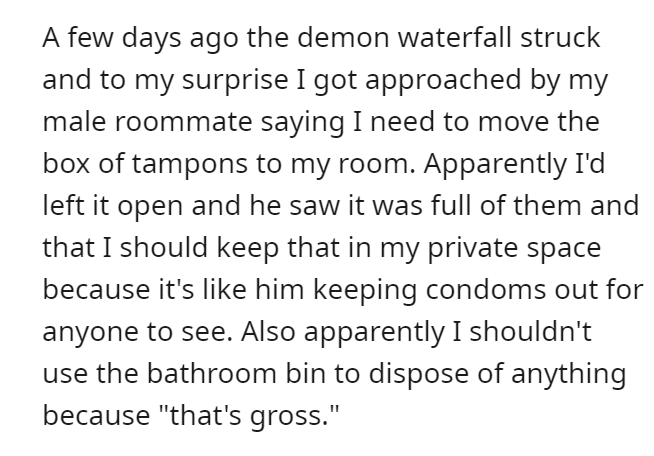 But the whole thing blew open when she talked about this with the other female flatmate. 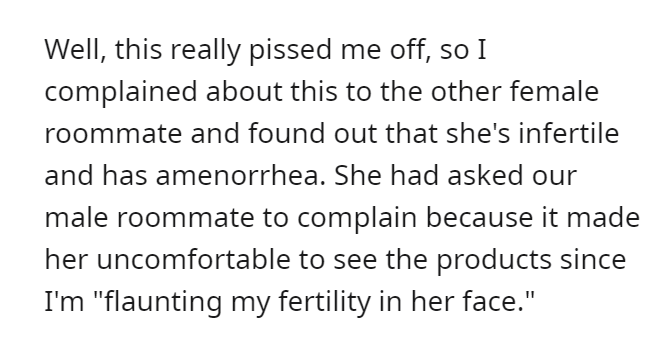 It seems she was the one who instigated this whole thing because she doesn’t have periods herself. 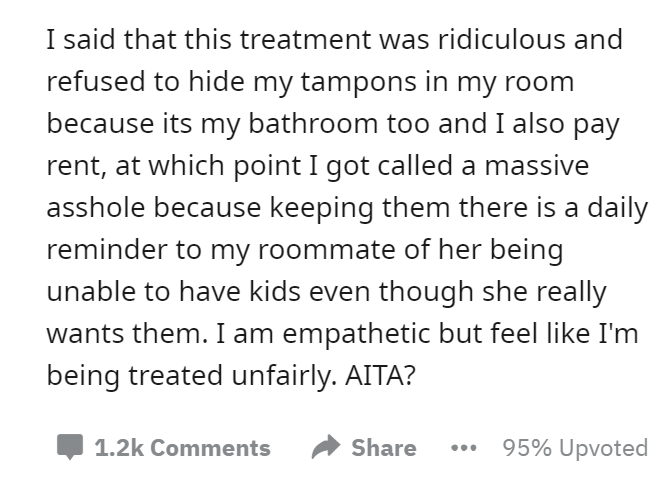 As one can imagine, everyone agreed on the fact that her roommates are being ridiculous. 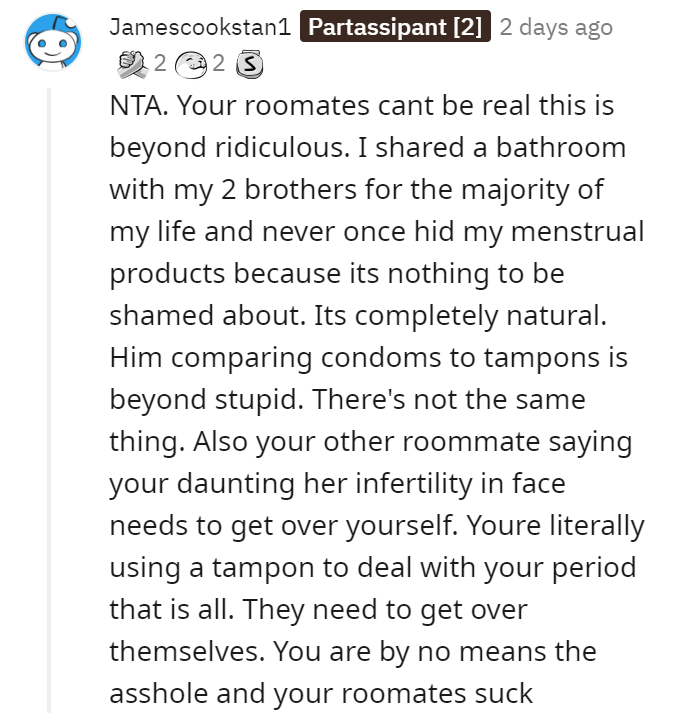 They are just like toilet paper and shouldn’t be such a big deal. 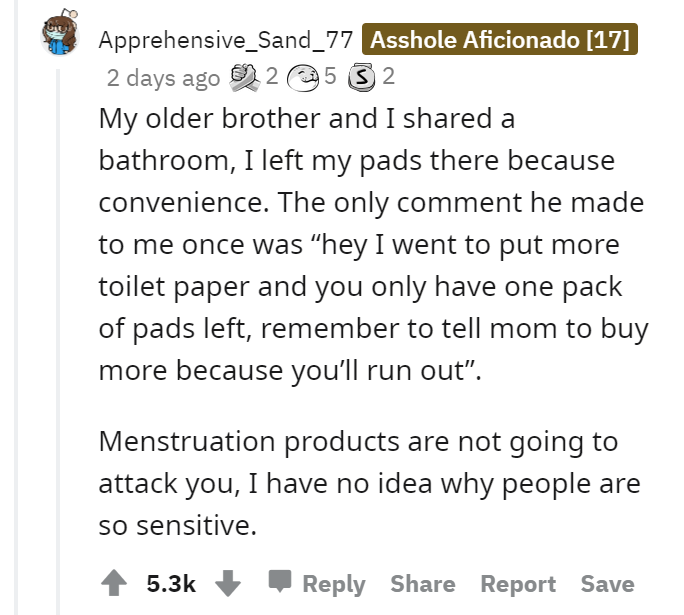 IKR, like how, is OP flaunting exactly? Flaunting would be bullying the female roommate for not having a period or for not being able to have children while OP can. OP dealing with a bodily process that they have to go through isn’t flaunting. What exactly do they expect OP to do? Like if they feel that strongly about someone else having their period, then the issue isn’t going to stop there at the tampons. It WILL get worse.

The female roommate is also so entitled for thinking that everything others are doing is done to spite her. She’s acting like OP only has her period to taunt her. She needs to get out of her world. –SpyMustachio

Where is one supposed to dispose of a used tampon? Take it to another bin? 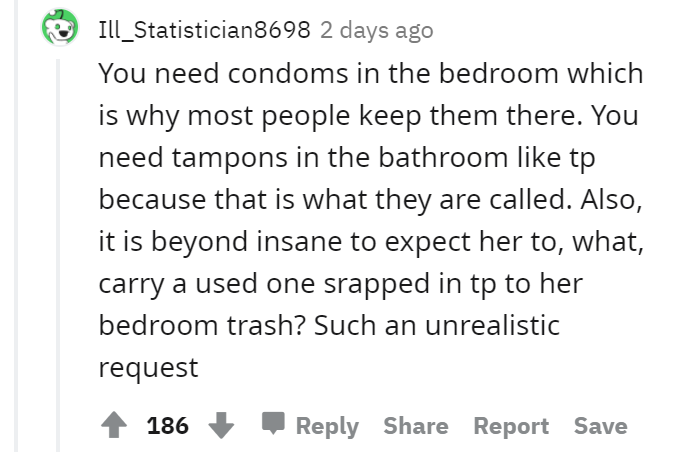 Moreover, many people pointed out that periods have nothing to do with fertility. 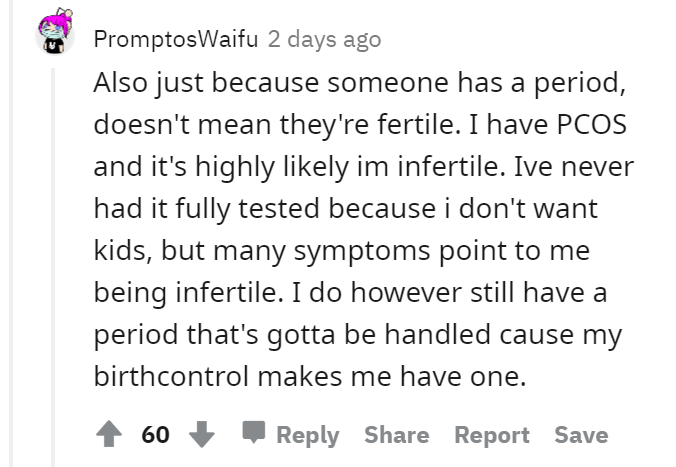 There are a lot of individuals who have horrible periods and still can’t get pregnant. 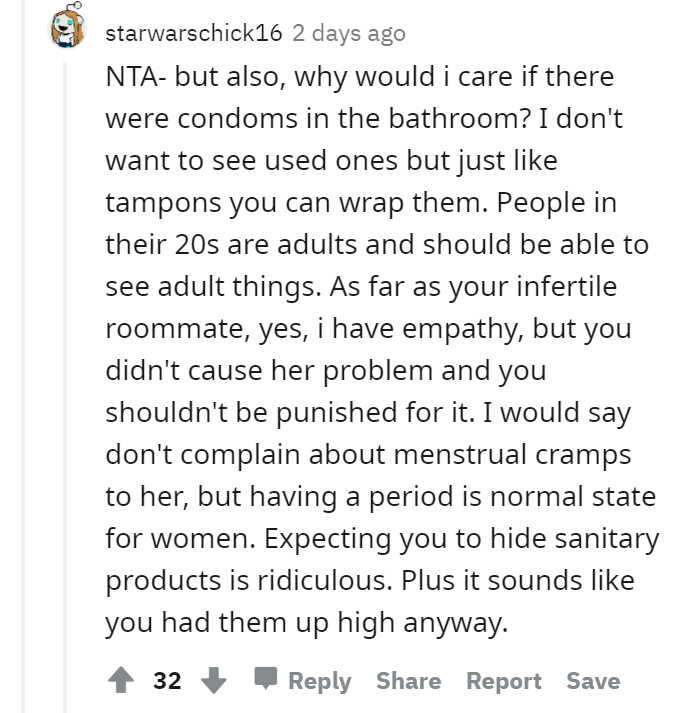 And at the end of the day, it is an unreasonable request. 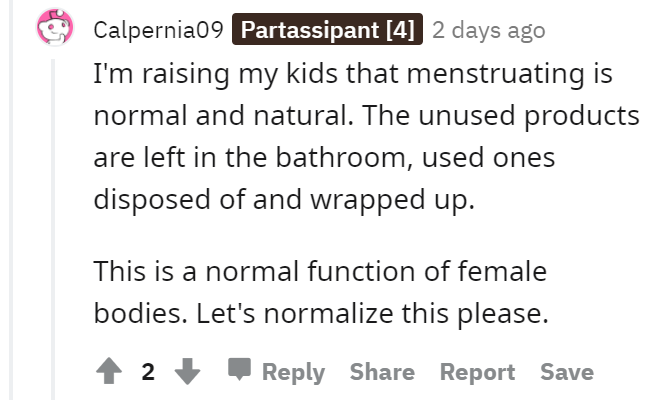 People get triggered by unnecessary things that shouldn’t even matter. 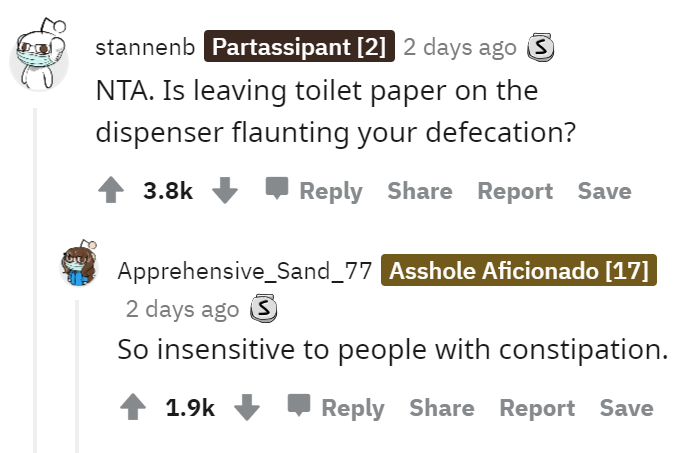 The best solution might be for her to find a new place as soon as she can. 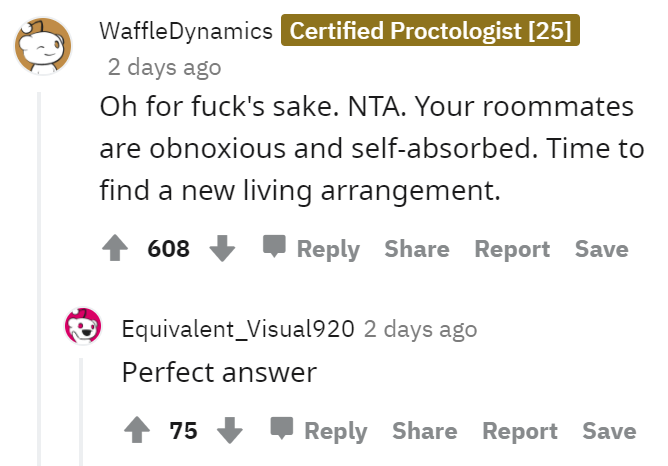 Jumping on to say your roommate needs to talk to a professional. It’s not on you to manage her emotions, but she’s obviously struggling.

P.s. I am infertile and cannot carry a baby, but still menstruate. One can always acquire a child by other means, but flushing tampons down the toilet or (?!?!?) carrying them out of the room to dispose of them in a different room is ridiculous/bad for the sewer system. –Sharon-Stoned

How do you think he should deal with this? Should she try to find a new place or talk things out with her roommates? Comment down below and let us know.