If you know an artist in your life, you’ll know that it’s extremely common for people to ask them for free work. Generally, they try to leverage their platform, saying that they will give the artist exposure by bringing their work in the sight of other people. This is usually ineffective, as artists can get exposure for their art if they’re also paid for it, which is why this entire thing even happened.

A user, who goes by St_Ailish on Twitter posted a conversation she had with someone who was trying to snag a freebie. They argued that because they had a platform with followers, they were providing the artist with an opportunity for exposure. The texts were less than polite. Besides, ironically enough, the artist got all the exposure she could ask for by making fun of this person in the first place.

In an interview with BoredPanda, she said;

“But when I saw how much attention it suddenly got, I was frankly a bit intimidated. It wasn’t until 2 days after the post completely exploded though. My friends were joking about the post getting 10k likes, I went to sleep and when I woke up, I was greeted with more than 20k likes and over the course of the day, it reached ridiculous amounts of traction,” 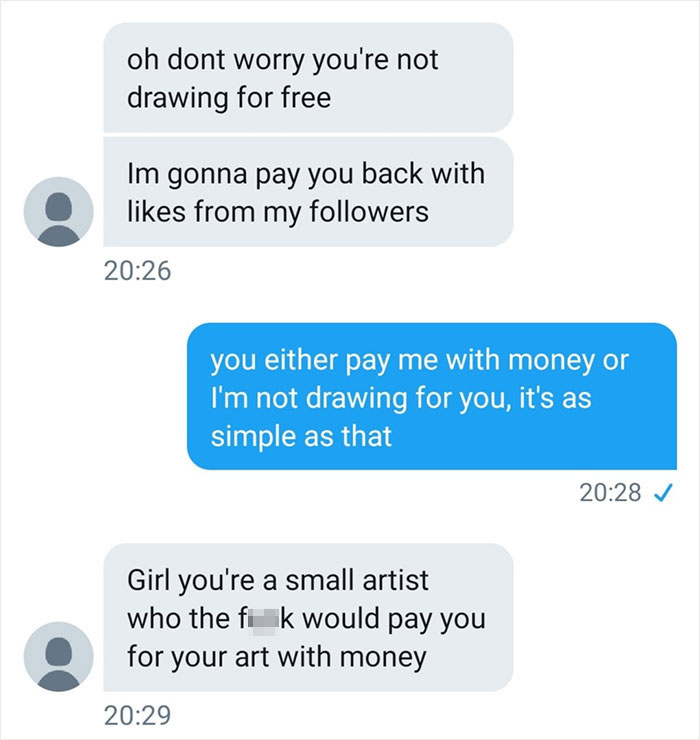 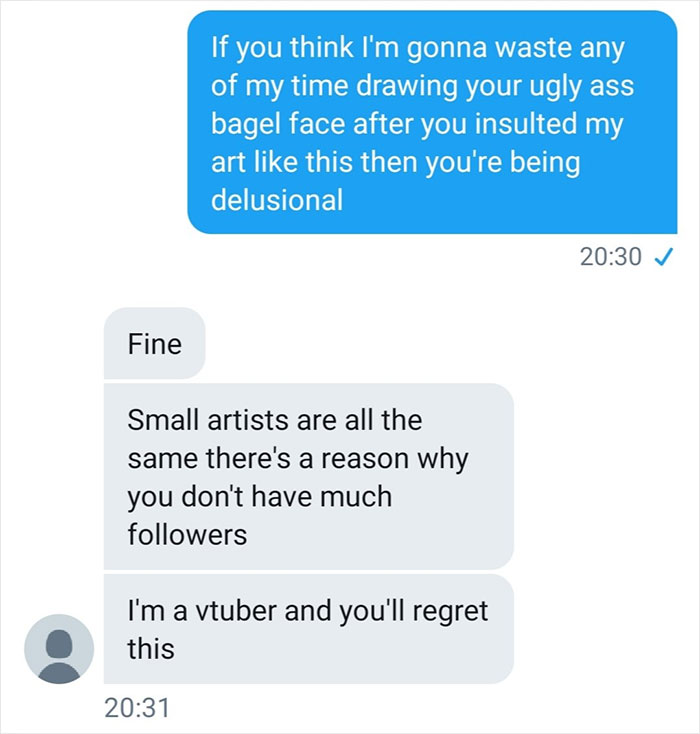 “Of course, I was happy to see my follower count skyrocketing, but at the same time, it felt incredibly undeserved. I still can’t grasp really what happened, it all seems so surreal to me. It felt like everyone was watching every step I did afterward. I’m simply not used to so much attention online, but it’s really fun to interact with people I’ve never interacted with before.” 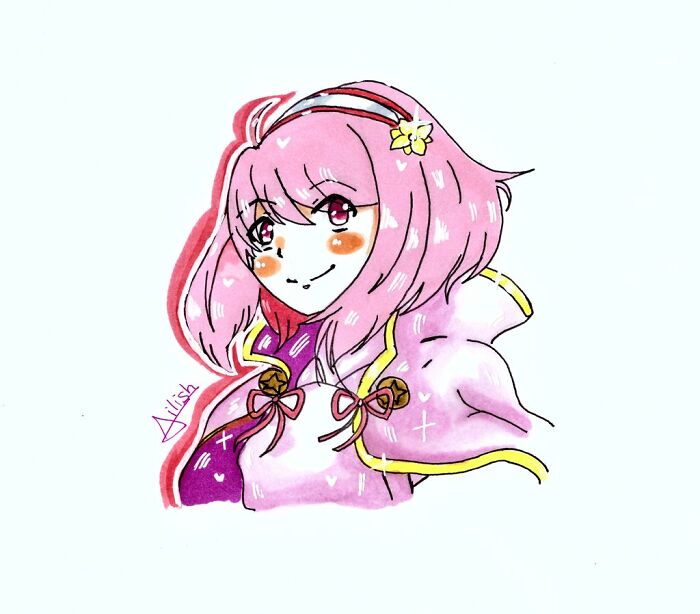 #5 The red bow is a nice personal touch. 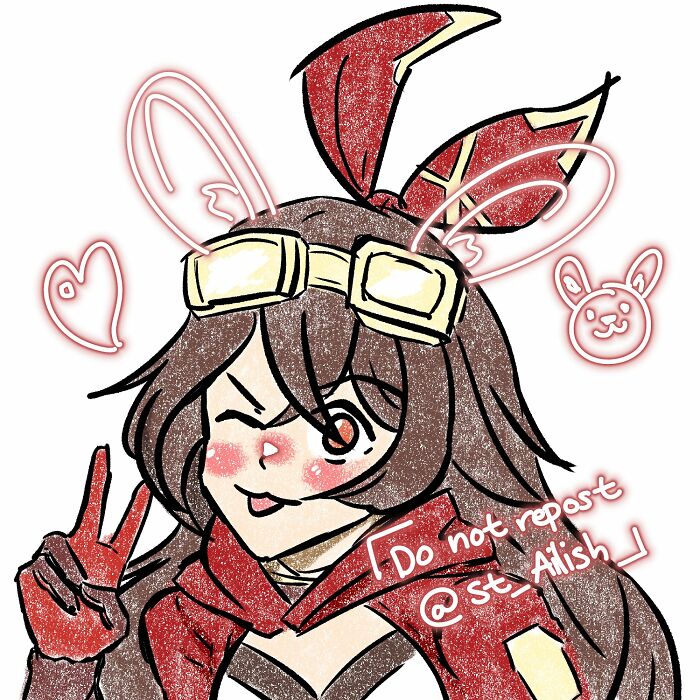 “A little bit of attention is what everyone desires really, but once I was there, it was way more attention than I could’ve ever dreamed of. I’m still doing the same things I did before, just with more people watching me.” 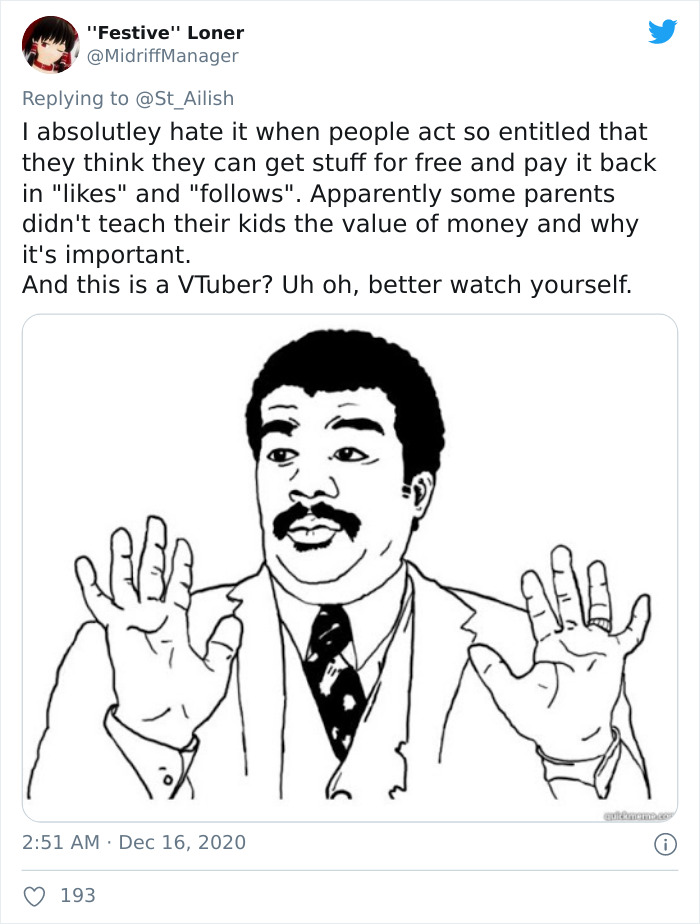 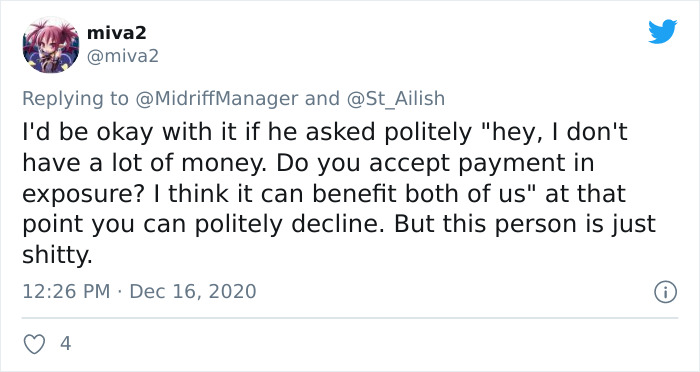 “Another thing that’s really important to me is that I don’t want people online to assume things. I’ve seen people getting accused of things they never did which harmed their reputation and it was never my intention to harm people online. Until this day, I still don’t know who they are and, honestly, I don’t really care either. They didn’t harm me in any way and even if I had their name, I wouldn’t ever release it, simply because I don’t want people to hunt after someone who didn’t properly harm anyone.”

#8 People still think they can exploit people with the exposure trick. 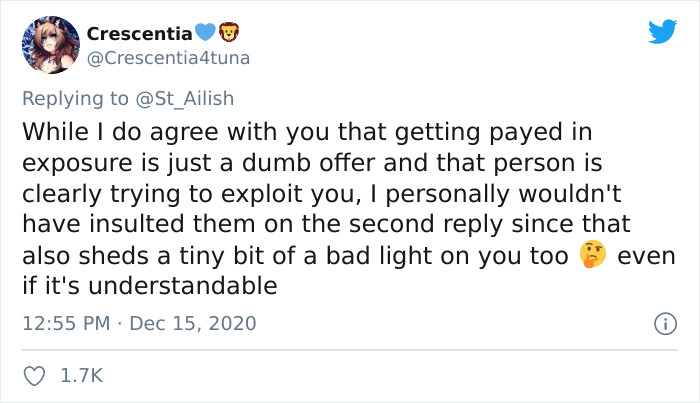 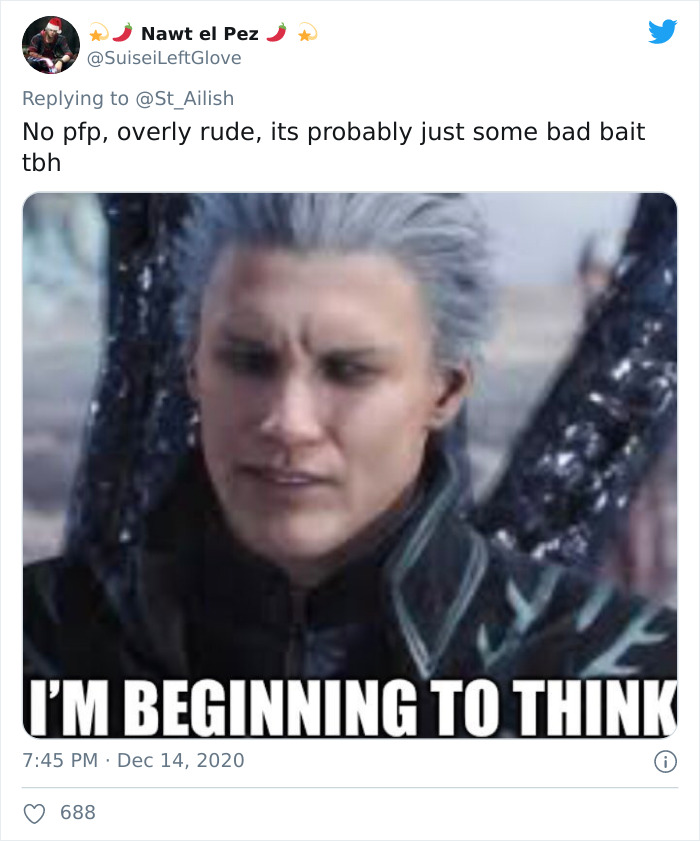 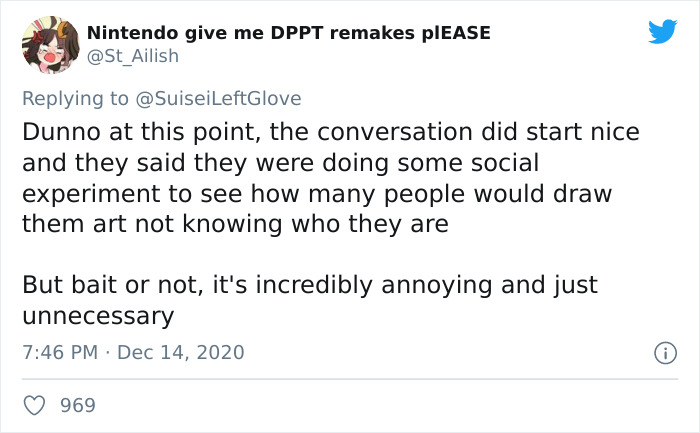 #11 Scummy is still a nice way to put the horrible he tried to do.

“I really just wanted to draw and express myself. I’m incredibly bad with words and it shows everywhere in my life. From people misunderstanding me because I wasn’t precise enough to me actually using wrong words. It doesn’t really happen with art. People can interpret what they want and it’s never really factually wrong. That’s what I like about art,”

#12 People really think they deserve everything just because they have a few followers.

#15 Having to put a disclaimer on your commission page. 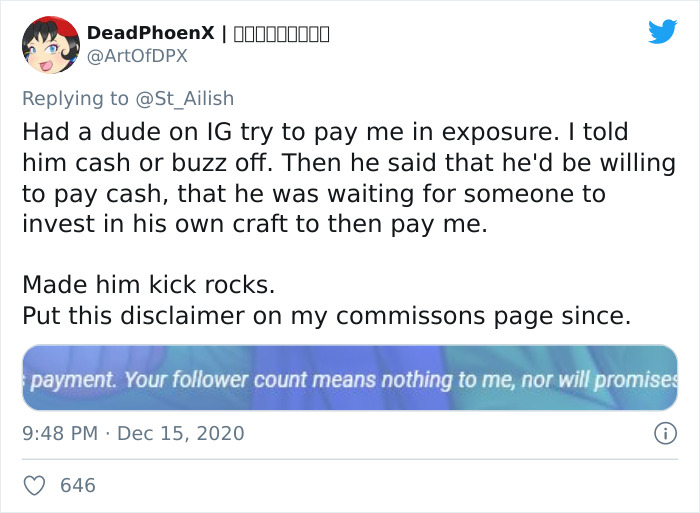 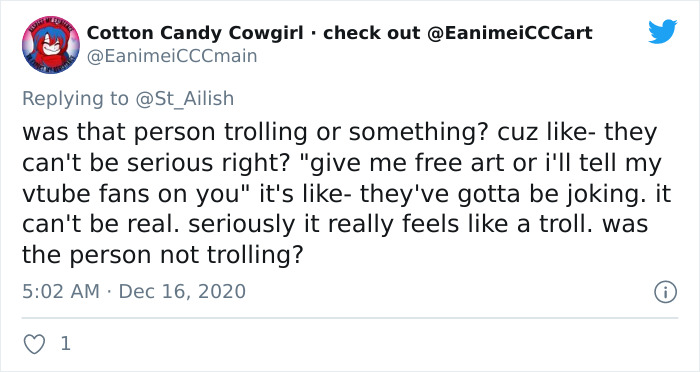 “I never understood why people think art should be free, it’s a skill people learn over a long time and never really finish [perfecting]. Whenever I draw something, it’s not just about the time I’m putting in now but also the time I’ve spent drawing before. My art today is the result of me drawing for years and that goes for every single artist.”

#17 As Low Muse put it. Some people are quite stupid. 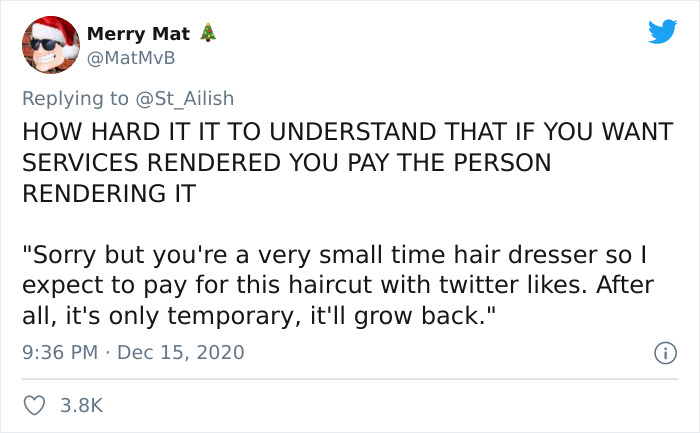 #18 If you are lucky enough to be in a position of power you should donate more not demand more free stuff. 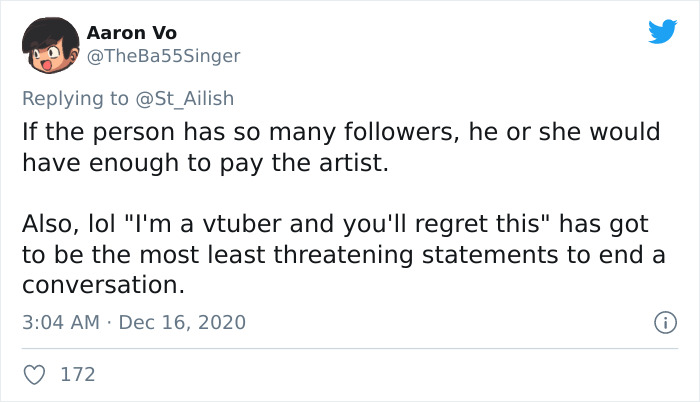 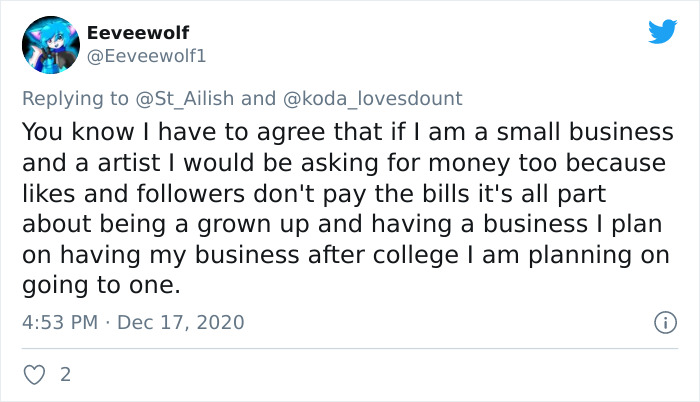 “Everybody can draw really, all you need is to pick up a pen and that’s it. People draw when they’re kids. So possibly what people think would be, ‘Why would I pay someone for something even little children do,’”

What do you think about this interaction? Tell us down in the comments!