You can’t force your choices on someone.

While I think being a vegan is great for the environment and people should be applauded for this choice. This however does not give them the right to force their choice on anyone. I myself was a vegetarian for a few years and I tried my best not to be a problem for my parents when they cooked meat.

Although it seems not everyone thinks this way. After all, there is a reason vegans get a bad rep. Now, I am not saying vegans are bad people. It’s just that the few extreme ones are really vocal and that tends to give every vegan a bad name. Following we have a story of one such teenager. When you mix bratty attitude, teenage years, and self-righteousness you get someone like this girl.

My parents would have never done this. If they cooked meat, I had to figure out what I wanted to eat for myself. 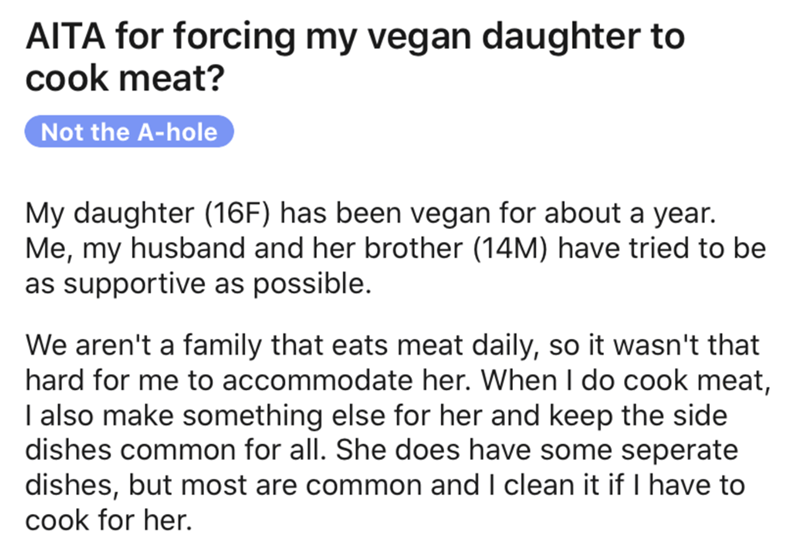 Honestly, wasting food is never okay whatever your dietary choices. 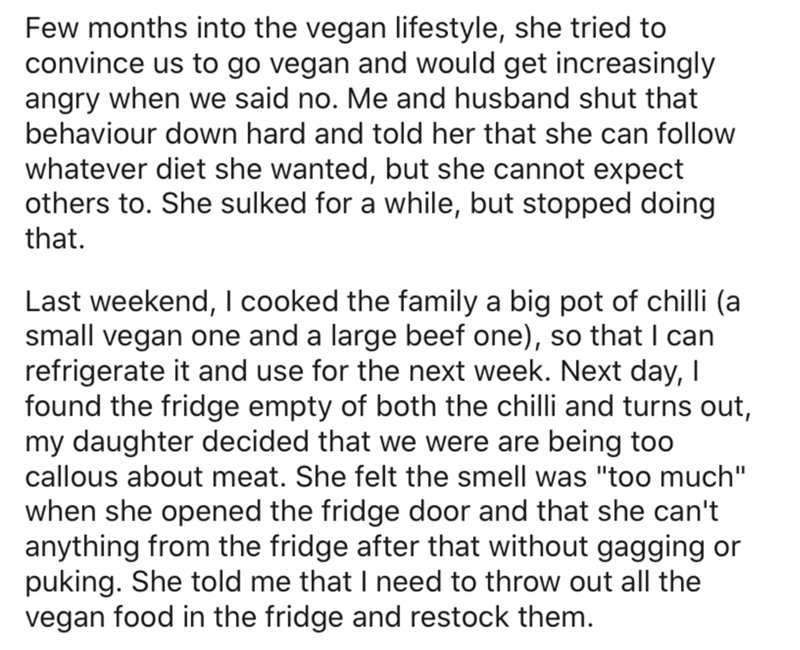 Isn’t it better to use the animals parts rather than waste it? Isn’t it worse for the environment to just throw it away? 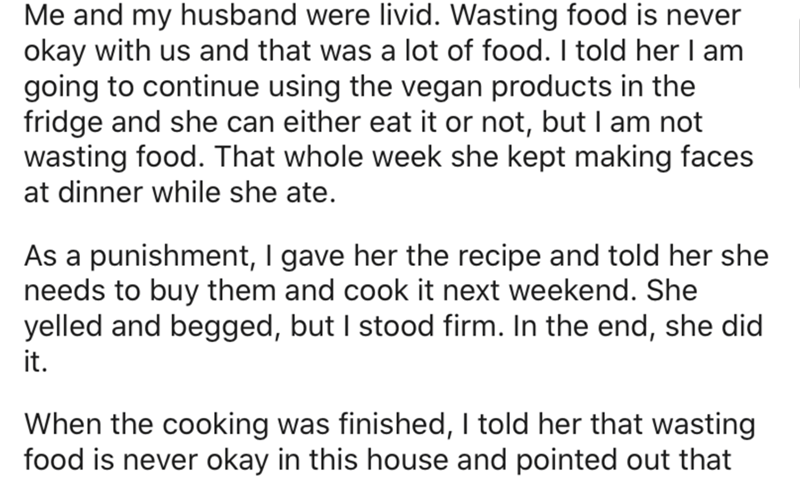 In my opinion, what you did was completely just however she may not see it like that. 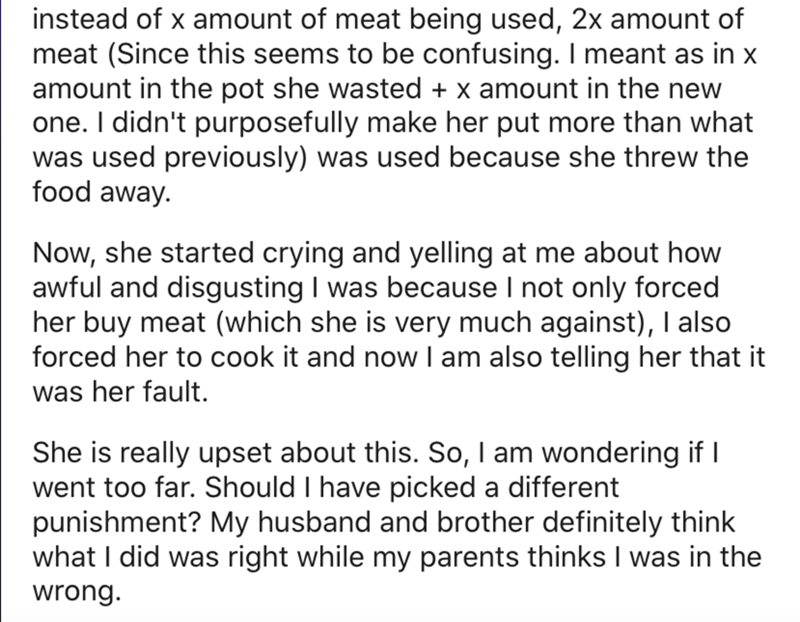 Exactly, Never force your own choices on someone else.

And she just learned it the hard way. 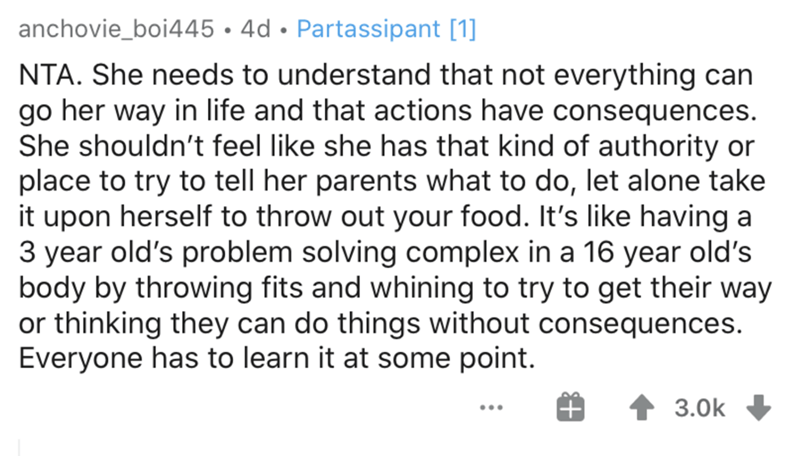 It’s not even a big deal. Many vegan chefs cook with meat. 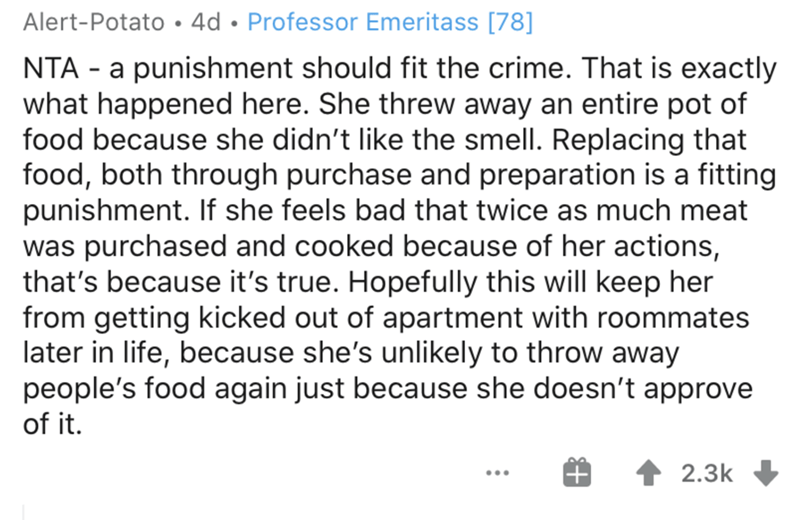 Sometimes you have to do things you don’t like to learn a lesson.

My point was to make her realise how much ingredients and time it took to make a batch of Chilli like that. Also maybe to show that throwing food away doesn’t somehow magically bring thay cow back to life.

I could have made her do a batch of vegan chilli, but I was worried it would set a trend of where she can keep throwing away food and as a result, she gets to make the entire family eat vegan. –avegansmum

She isn’t a child and should know what is wrong. 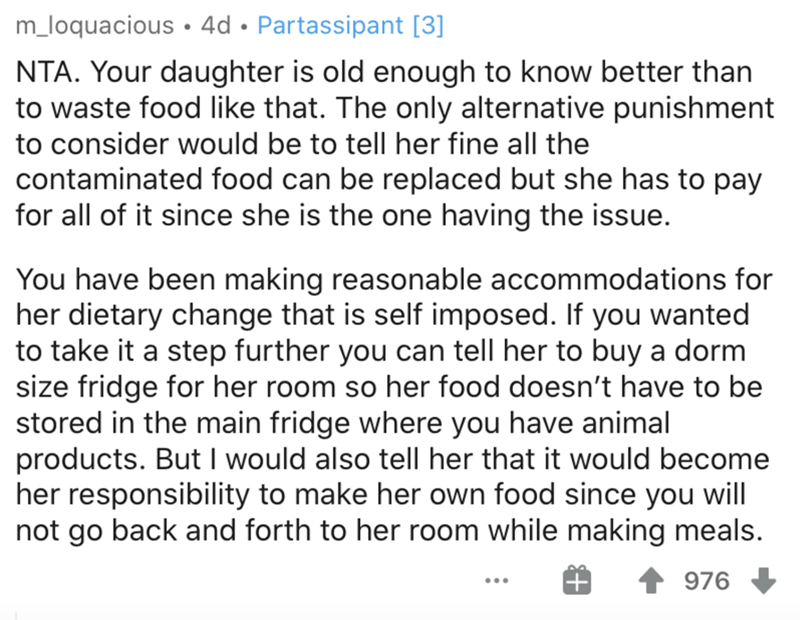 Her parents have been more than accomodating.

it is her own choice and while it is a good one, that does not give her any moral high ground. 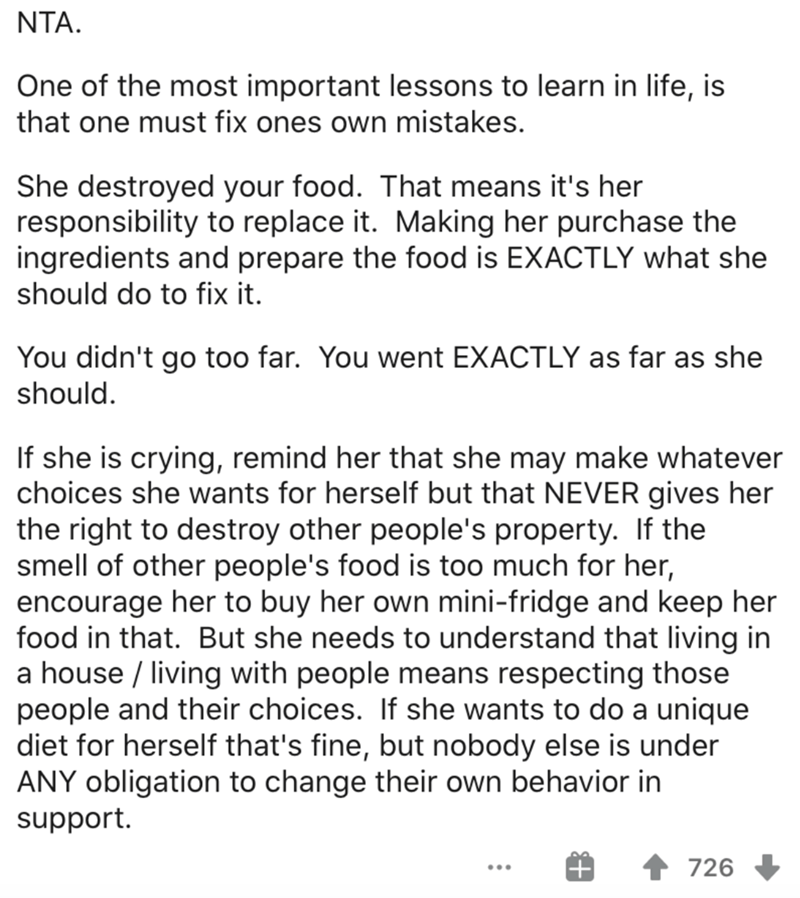 She may not see it now but she’ll learn.

Most kids are like this though. They never try to understand the parent’s point of view. 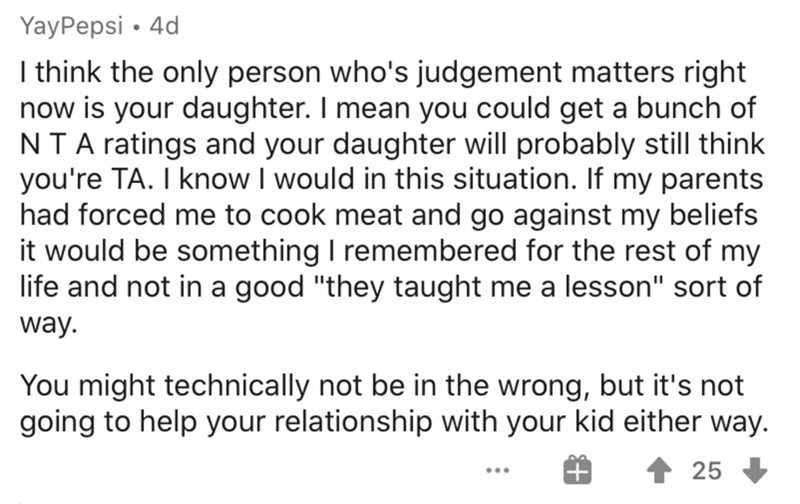 Guess she didn’t think about that.

Throwing away food is wrong, period.

Just ask her to cook for herself and she’ll learn.

And neither should she think that she can control everyone. 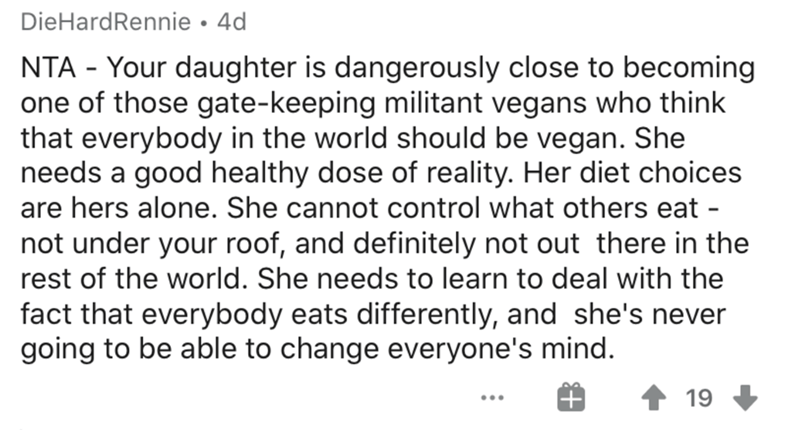 She was in the wrong so she got punished. Simple.

Maybe she will learn after that.

She should be thankful.

Most parents wouldn’t be this supportive. 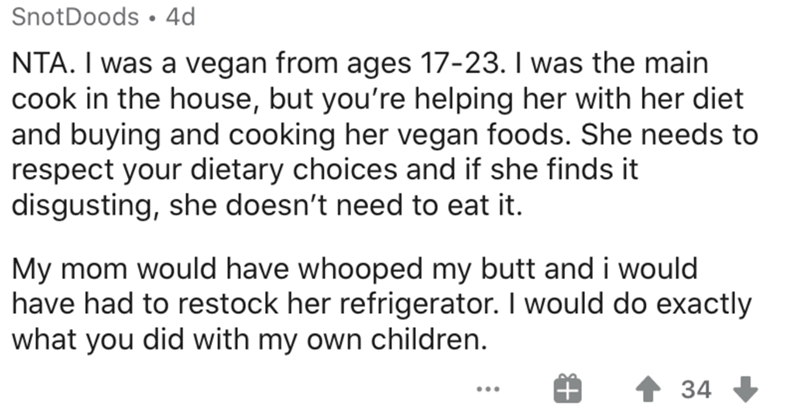 Wait have we found the one vegan that doesn’t try to force it on others, my lord the prophecies foretold this but I didn’t expect it in my life time 😮

Jokey stereotypes aside this is the correct way of looking at things it’s a deeply personal choice of hers and wasting the food in my opinion is even worse then eating it, as at least if an animal is killed for food we should use as much as we possible can to not let it die for no reason, throwing away meat defeats that entire purpose. –RoosterReviews 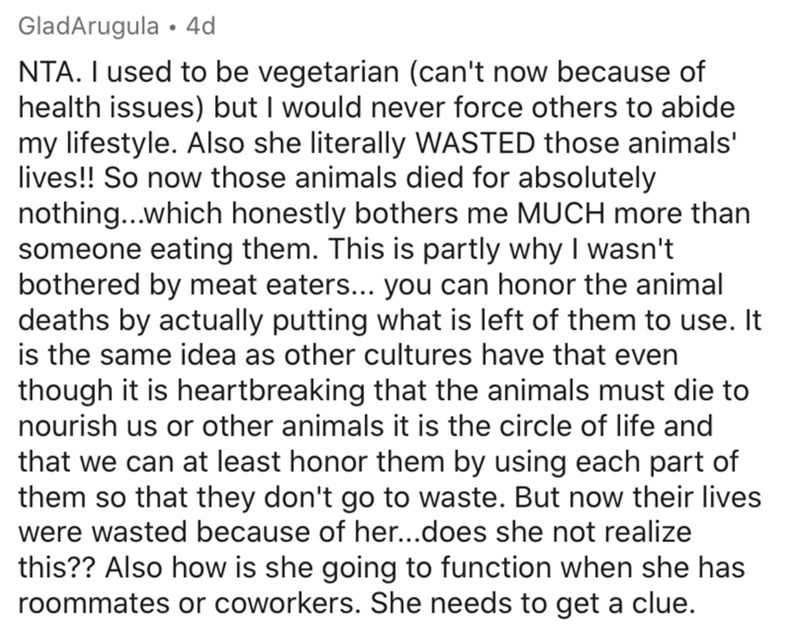 She didn’t force her to do anything immoral. 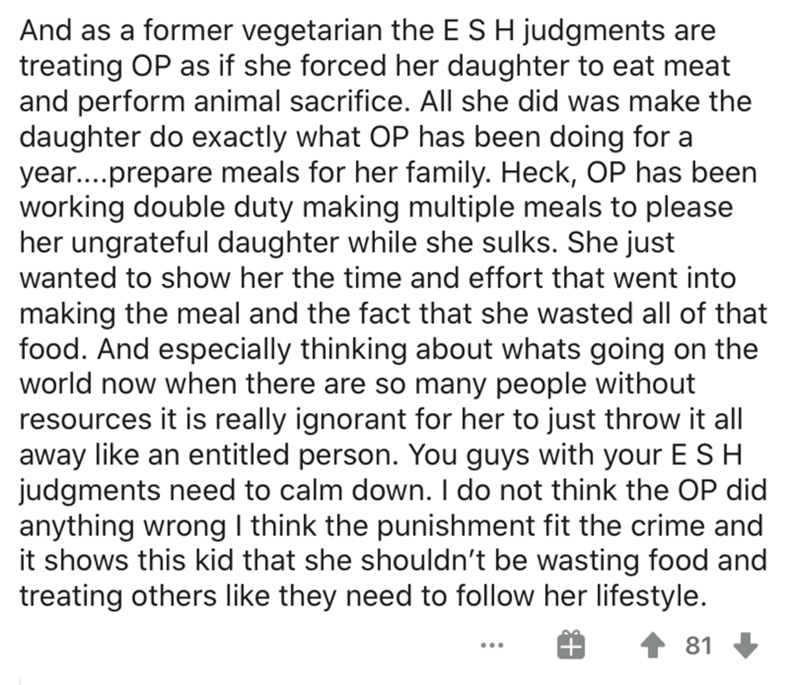 What are your thoughts on this? Do you think the mother was too harsh? Comment down below and let us know.