Everyone loves a chonky cat except the veterinary doctors.

Let’s be honest, you can look super slim and sleek, being called hot and everything but you cannot look as cute as a chonky cat. There is something very amusing about fat cats, that chonk makes them look very innocent and adorable. And as humans, if we find anything or anyone innocent and adorable, we fall in love with them and promise to care for them forever. That is the reason why many cat lovers prefer chonky cats over slim ones because firstly, it is a matter of preferences and secondly, you just can’t resist them. And the trends are in line with what I say, people do go crazy online when they see pictures of chonky cats. it’s like that chonkiness enchants us all to fall in love with their gorgeousness.

But, there shall always remain a but, some evil people are against the chonky cats. This, of course, is being said in a lighter mood, but apparently, veterinary doctors cannot stand fat cats and it does kinda makes sense because they are doctors and doctors want you to be fit and healthy. Today’s story is about a case that an Imgur user, KneeApallingTanIceCream came across as they were minding their own business. They were walking down a street when a very intriguing sign made them boss and read, it was a message from a local veterinary clinic exposing Fred the cat for being extremely far.

Scroll down below to know further details about how things proceeded.

This is the sign that forced the Imgur user to stop and read. 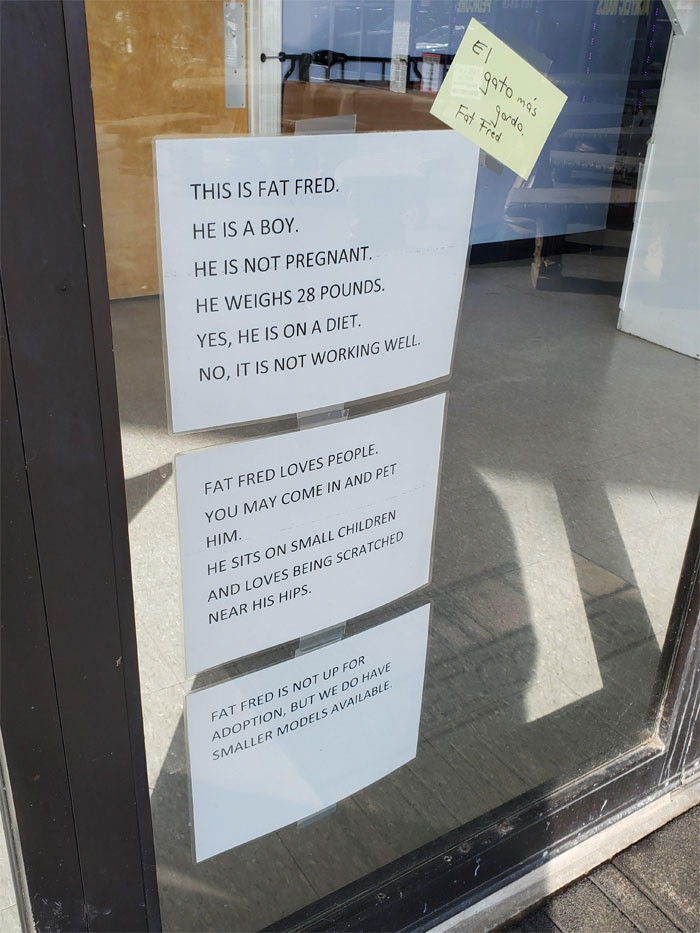 The exposing note was more of an advertisement to attract people to come to see Fred. They mentioned big boy Fred is very fat even though he is on a diet, is not for sale, loves to be pet, loves sitting on children, and getting scratched on the hip. 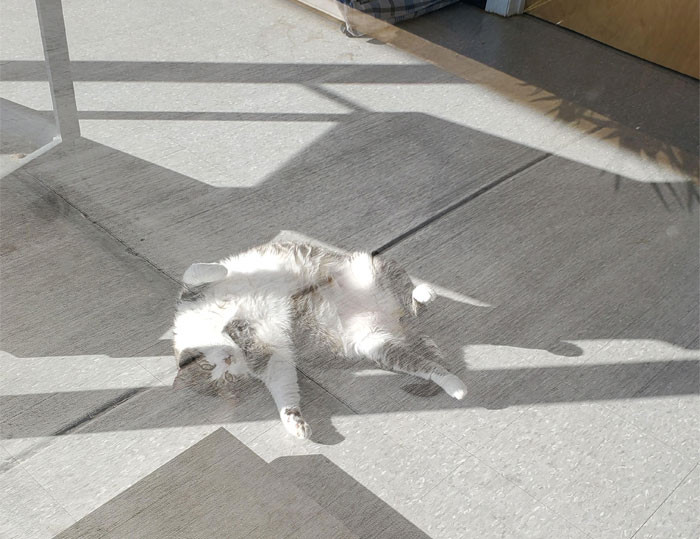 Fred the Cat got over 116,000 views on the Imgur post. It is safe to say he attracted a lot of people and fatness ultimately won.

User KneeApallingTanIceCream was approached by Bored Panda for an interview and here’s what they said about the whole situation:

“The sun was blinding so I tried to stand off to the side to get a pic and ended up with a pepper ghost effect. Which I didn’t even know was a thing until this post.”

“Unfortunately the vet was closed that day so I could only watch Fred from the window. He was very playful even through the window. As far as a pet slimming down, a diet with some good activity time each day should help. I am actually about to go out of state, but plan on visiting Fred when I get back after the holidays.”

The clinic was closed when they went to reach the local vet clinic but did manage to get a glimpse of Fred the Chonl from the clinic’s window which was enough for them to take a picture and post it on the internet.

Just for the record, healthy cats on average weigh about 10 pounds. Compare that to the 28-pound Fred tells you that he has put some serious weight on. Obesity is a serious issue and can cause serious issues in terms of health and drastically lower the lifespan if not dealt with. But I am sure being in close protection of the vets, Fred is being taken good care of and his chnkiness is only to be adored and is nothing to be worried about.

Here are some of the comments shared by internet users about Fred that went viral:

I think we found an Obese commenter.

All professions must be respected.

Fred will never be on sale but they have other, smaller, options.

Hence proved, he is a magical cat.

Oh dear, I never looked at the situation from this angle.

No sir, it is indeed a cat. And a very fat one.

For all the Terminator fans, if you’re still alive.

I hope you guys enjoyed the story. Share your thoughts in the comments section down below. What are your views regarding chonky cats?