The problems of the homeless are real, and it is not because they are lazy.

You never realize how privileged you are until you have to walk a mile in the shoes of someone who does not share the same privileges as you. Sure, the grass may always seem greener on the other side but there are so many people who have it a lot harder than we do. We should not point fingers just because someone is far behind than us when it comes to life. Some people are not born in wealthy families with access to a home, education, or even basic necessities of life. Building your life from scratch is not easy. If someone has not built it yet, it does not mean that they are lazy. They are doing their best. Count your blessings and do not blame people for things that are not in their control.

This woman on Reddit shared the story of her daughter cussing a homeless man and making fun of him. She told him he was living someone’s vacation. When her mother found out, she was enraged. As a lesson, the mother made her daughter sleep in a tent that night and asked if she was wrong for doing so. Scroll down below to read the whole story and decide for yourself:

The story was told by a single mom who has worked very hard to reach the financial position she is in right now after she lost her husband. 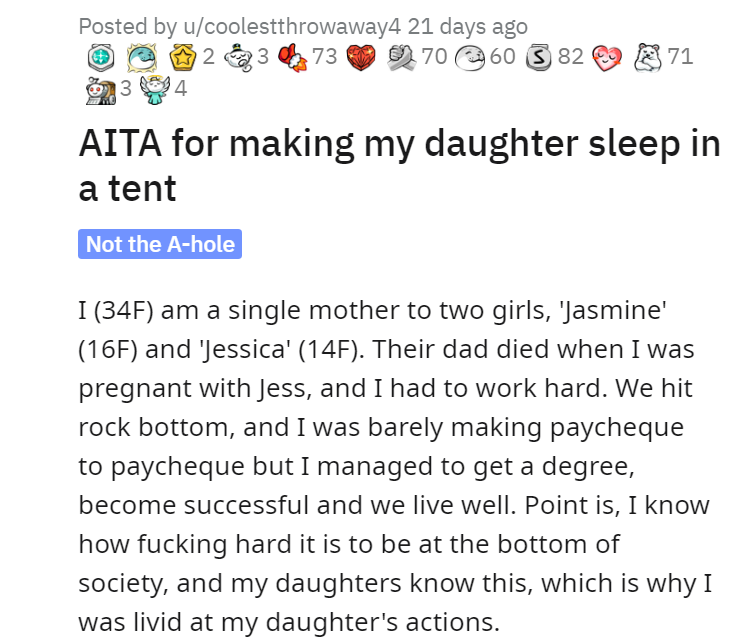 The woman has 2 daughters and one of them showed her a video of her other daughter, Jessica, cussing a homeless man. 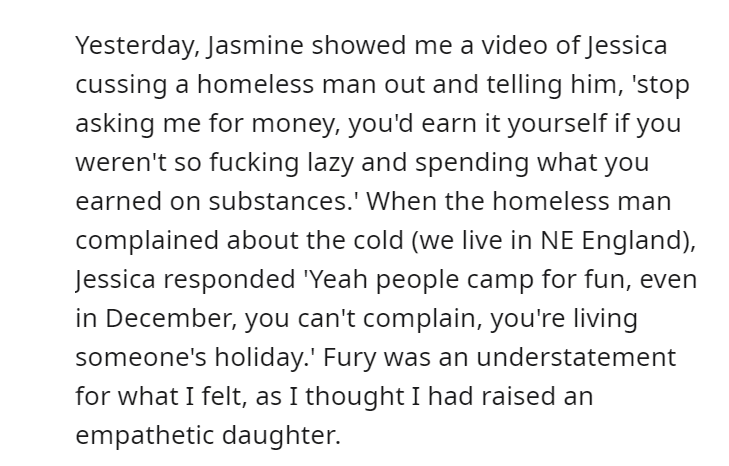 So the woman decided to teach her daughter a lesson. She made her daughter apologize to the homeless man and pay for a hotel room for a night. Then she made her sleep in a tent for one night. 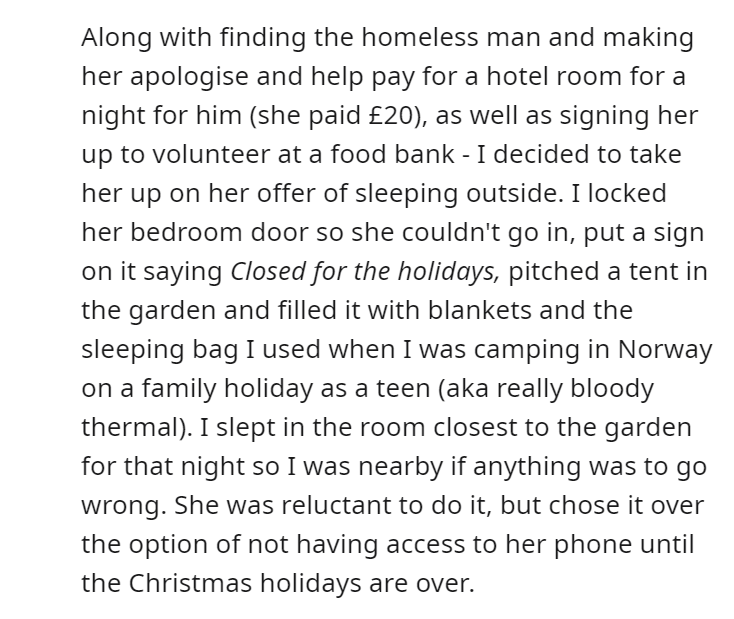 Jessica quite clearly learned her lesson and the very next day prepared a meal for the homeless in her area. 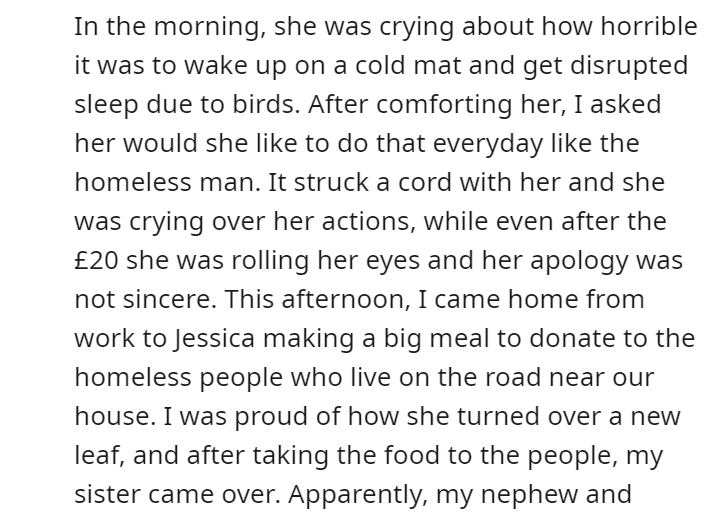 However, the woman’s sister said she was too harsh in her punishment and the woman has been second-guessing her decision ever since. 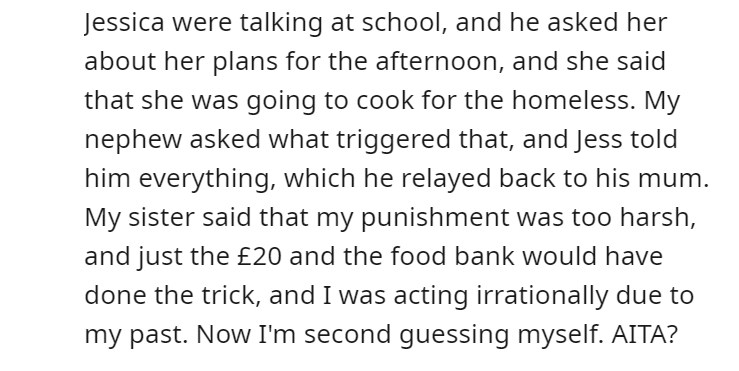 In my opinion, this is parenting done at its finest! Not only was the punishment adequate, but it was also effective. The daughter seems to have learned her lesson and is a lot more empathetic towards the less privileged now. This is how you make sure your children don’t turn out to be spoiled brats.

This is how people reacted to the woman’s story:

Everyone appreciated the woman for her parenting skills. 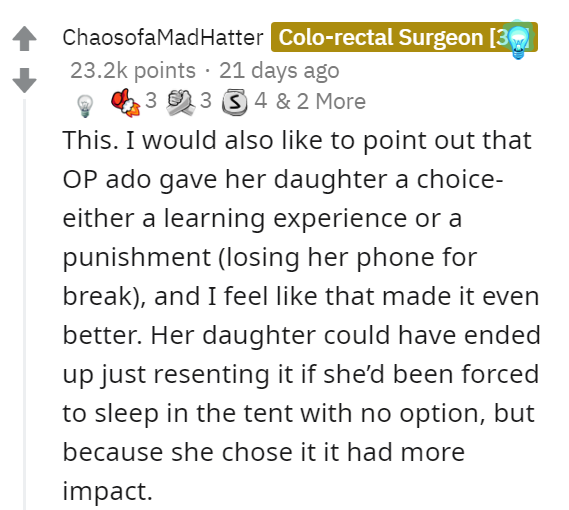 The woman wasn’t even slightly in the wrong here. 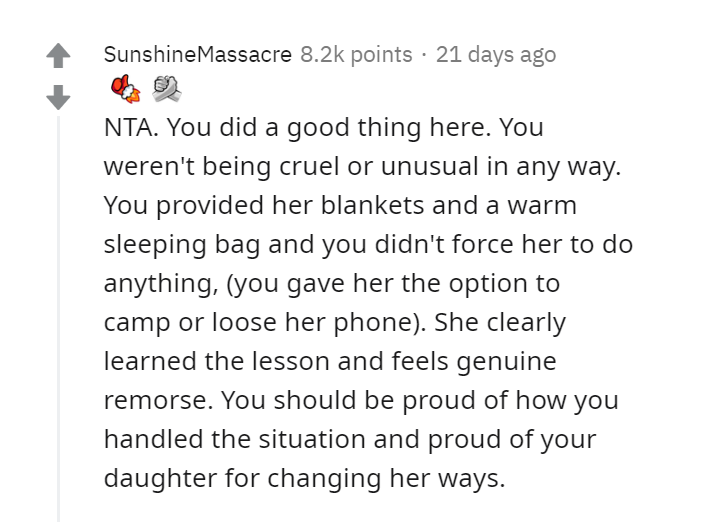 The child had a choice and she picked the tent.

Setting up a tent is a punishment in itself.

The woman is not to blame at all. 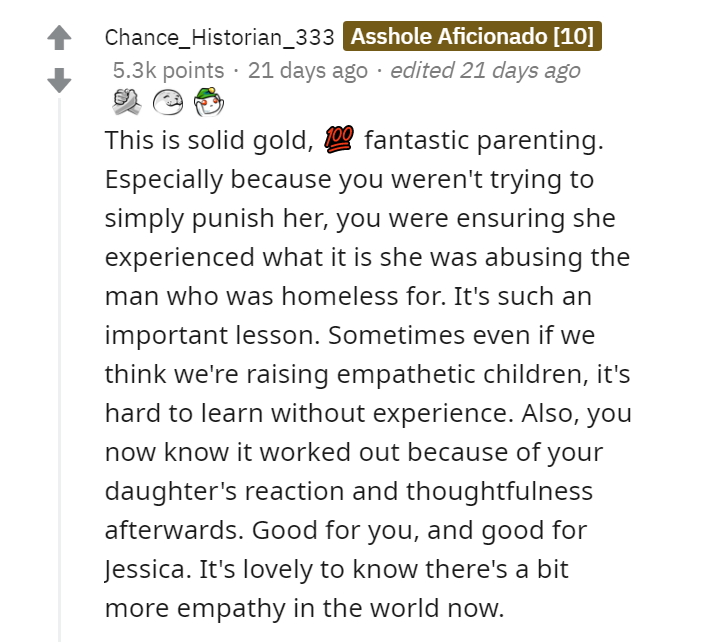 We hope her kids turn out empathetic and kind. 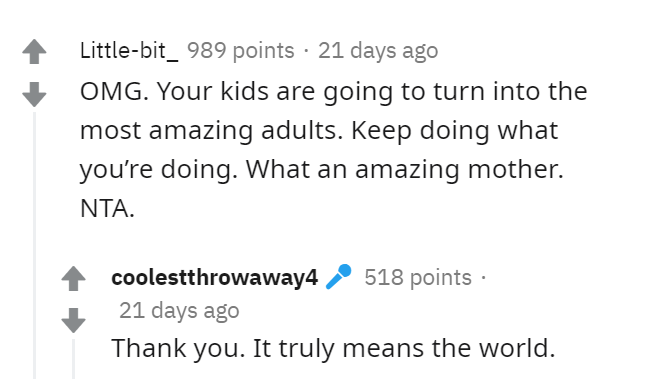 The homeless man has been doing better as well since then. 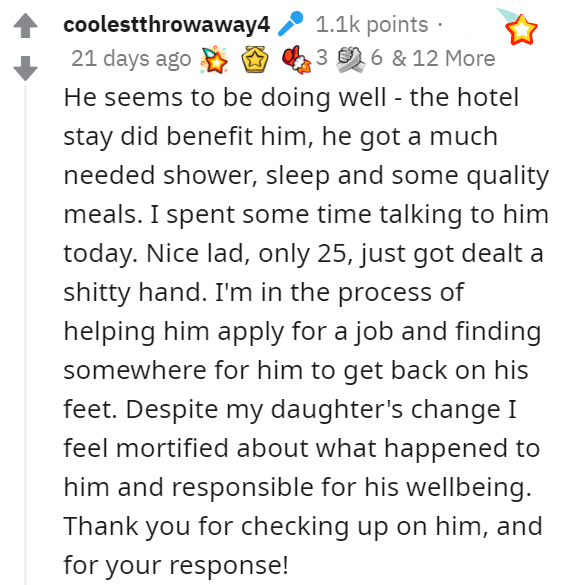 What are your thoughts on this? Do you think the punishment was too harsh? Share your opinions with us in the comments below.