Some people get bored quite easily.

I am one of those people who picks up something new, and will do it for a week but then never touch it again. It is just one of my habits that has led to me having a lot of useless stuff that I don’t really need but keep buying. However, I have learned to manage it better in recent years and not waste my money. But the same thing doesn’t apply to pets. After all, animals aren’t toys for you to play with them for a bit, get bored, and throw them away.

They are living breathing beings and we should treat them as such. However, some people tend to forget this and only get a pet just because they feel like it at the moment and then don’t give them the proper love and care that they need. Pets are much harder to take care of than some people think and it should be an informed decision rather than an impulse. However, the woman in this story loves to do things on impulse and this time, her husband had enough and didn’t want her to do what she has always done.

Even from the title, we can tell that this story is going to be a doozy.

His wife has a habit of doing this but she promised not to give the puppy away this time.

However, that promise didn’t last long as she wanted to give away the puppy after a few months.

She even bought a new dog without talking to her husband at all.

Her husband isn’t back down at all this time and I agree with him.

He even updated the post with some more information later on.

While he is sure she won’t hurt the dog but it has put things in perspective for him.

He wants to leave her and he is sure that she will give him the second dog as well.

She is apparently on medicine and going to therapy but it doesn’t seem to be working for her.

I did get a cat on a sort of impulse as well. I mean I had wanted a cat for years but I was never in a situation where I could care for one. However, one day I woke up and immediately went to adopt a cat. Now the first few weeks were extremely hard as the kitten got used to the new environment and since I was a first-time cat owner, I didn’t know a thing. I am ashamed to say that I even thought of giving the kitten to someone in the first week after the initial excitement work off and the reality set in. However, They are living beings and I realized it wouldn’t be fair to him and now he is the most precious being in my life.

People in the comments were unsurprisingly by his side.

They advised him to stand by his decision. 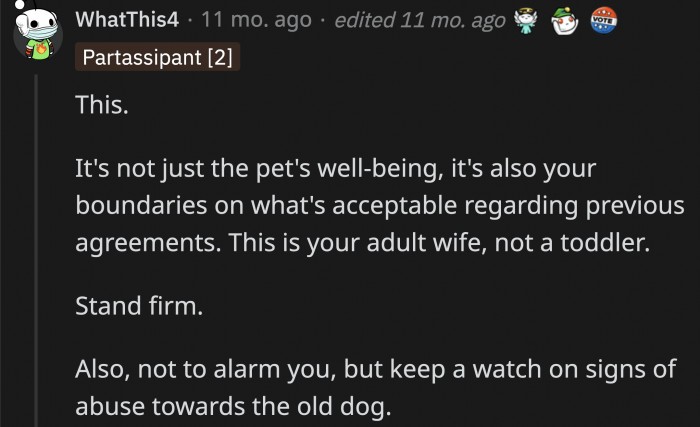 Some people even got suspicious of the ADHD diagnosis.

I agree that ADHD doesn’t make you any less empathetic and I speak from experience.

Hyper focusing on something is relatable but getting bored of a living being is not.

Most people think that she is using ADHD as an excuse. 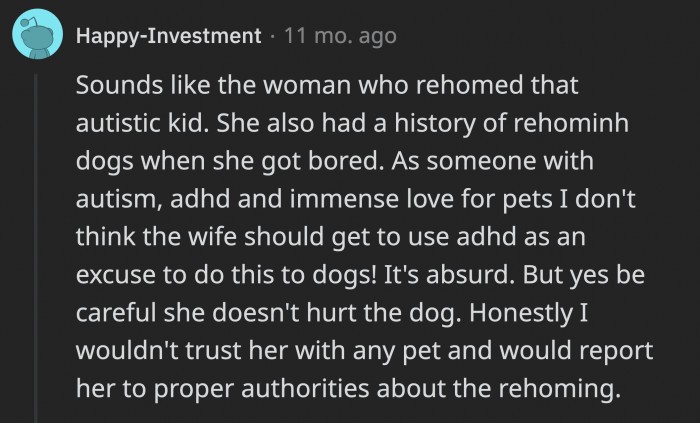 Some people just aren’t meant to have dogs and that is fine. 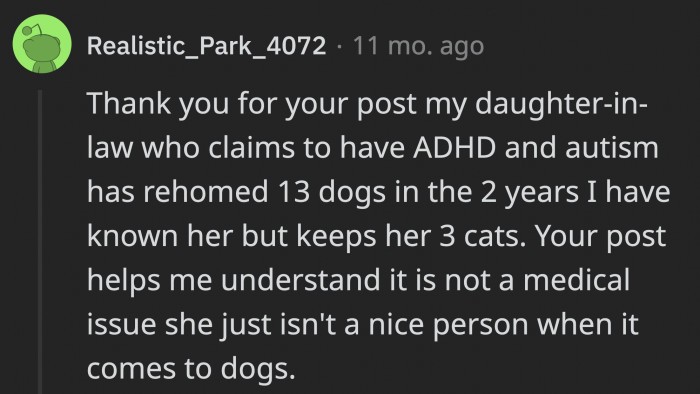 I find that this post will relate to many people out there. 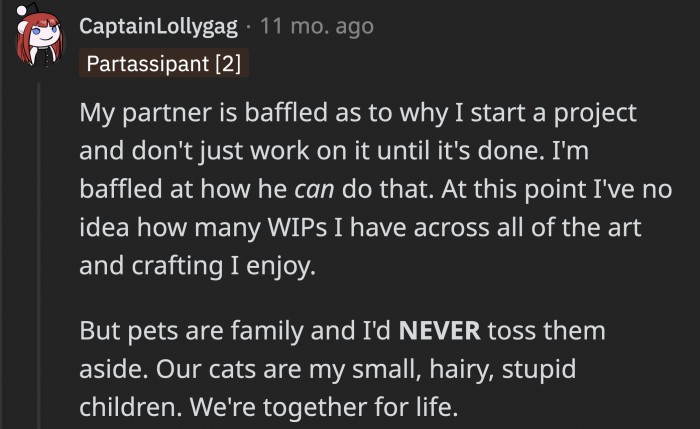 Why get dogs in the first place if she knows she won’t want them later on?

I generally recommend communication but that isn’t going to help here.

I would agree that he needs to be careful.

What are your thoughts on this? Do you think she suffers from something else other than ADHD? What would you do in this situation? Comment down below and let us know. Also, don’t forget to share this story with your friends so they can join in the discussion as well.