Nobody ever said that being a parent was easy. And this is especially true if you are a single parent. You have to stop living for yourself and you have to look after your child till your death.

Nothing can truly prepare you for the challenges that come with being a parent. So it’s only natural that we’ll make some mistakes along the way.

The challenge became real for Reddit user u/Imnotyourbuddytool when it came to caring for his 7-year-old daughter’s hair. He recently asked for feedback on how he dealt with a situation with his daughter on the r/parenting subreddit. The Redditor’s daughter had lovely long hair, but she refused to care for it. Any attempt to brush the 7-year-hair old’s resulted in a tantrum or she would simply walk away and refuse.

As a result, the single father warned her that if she did not take care of her hair, they would have to cut it off. Tired of the daily struggle, our OP went ahead and cut his daughter’s hair to just below her shoulders.

The little girl was obviously devastated, and our OP was left wondering if he had done the correct thing. The Reddit community, as normal, had plenty to say about it, so keep scrolling to see how they reacted and make sure you watch it till the end otherwise you are not going to get the whole point here. Good Luck!

1. She had beautiful hair but she refused to take care of it 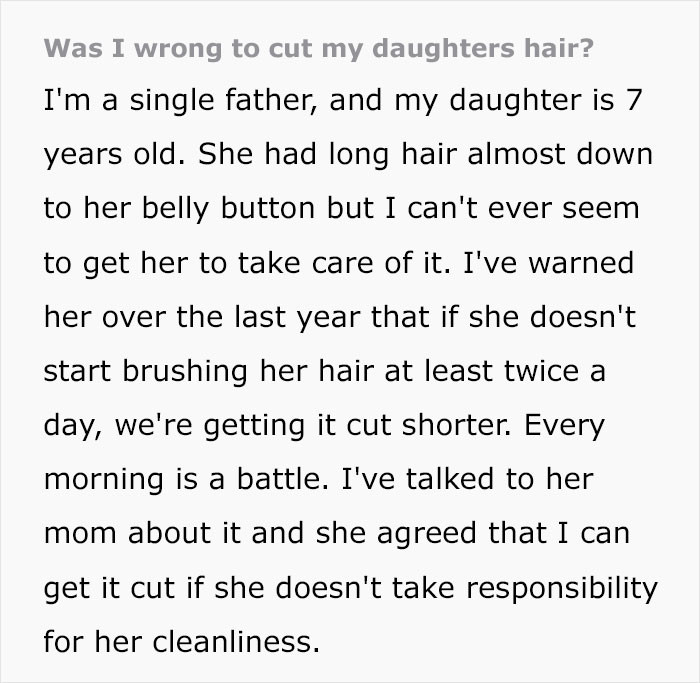 2. Any attempt to brush the 7-year-hair old’s resulted in a hissy fit, or she would simply turn her back and refuse. 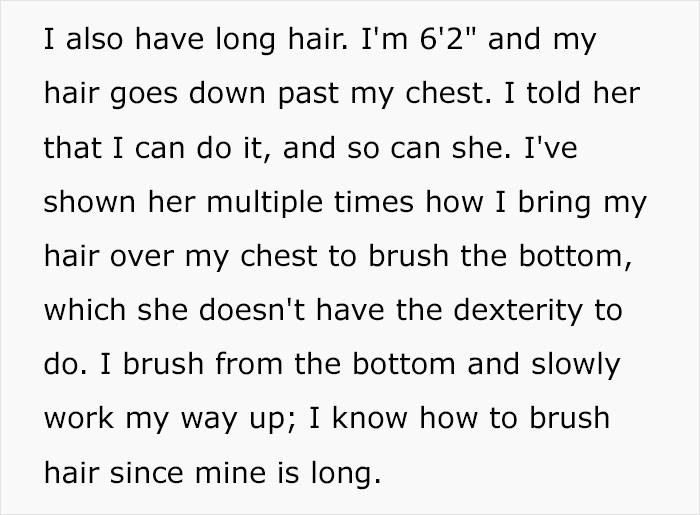 3. What do you think was it unnecessary to cut her hair short? 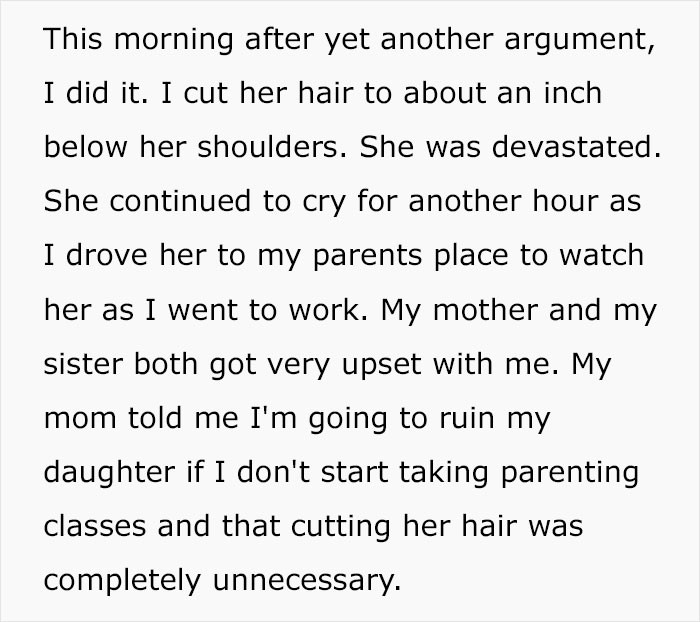 4. The little girl was certainly devastated, and our OP was left wondering if he had done what was right. It’s up to you guys to let us know. 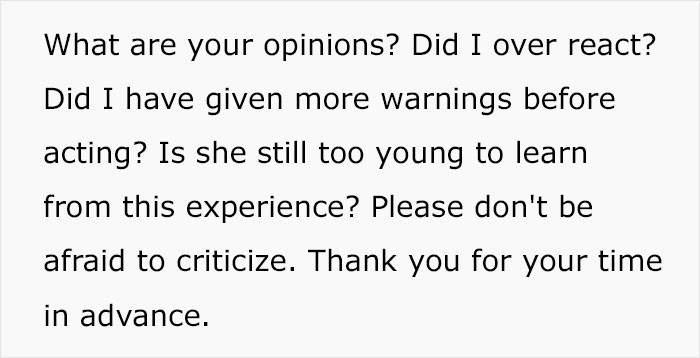 Here’s what Redditors had to say about this 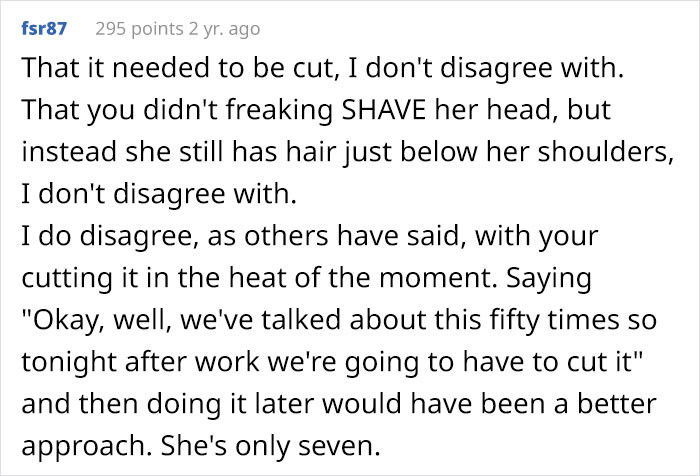 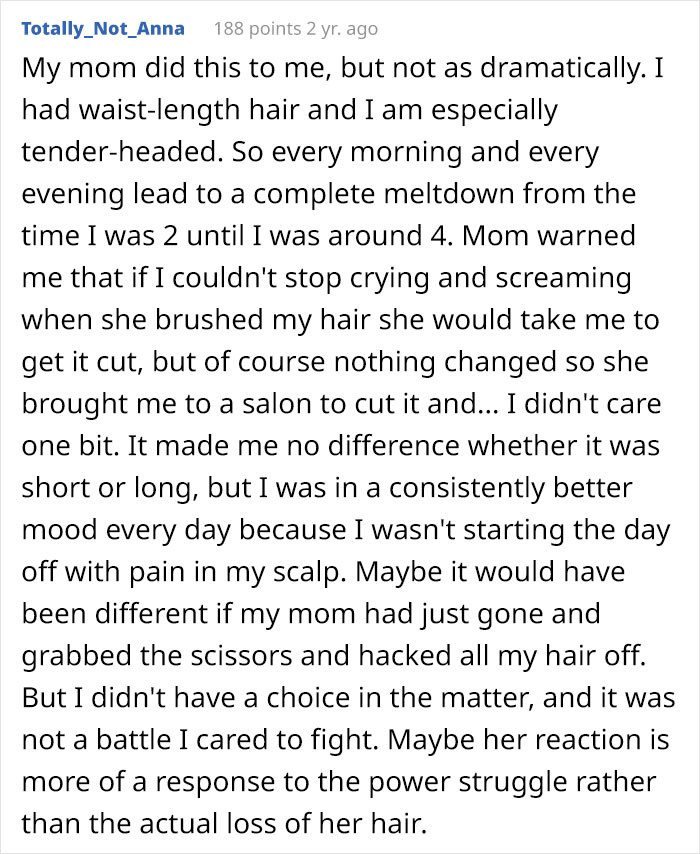 7. Maybe OP should have warned her one last time

8. OP you have a lot of work ahead of you to retrieve from this 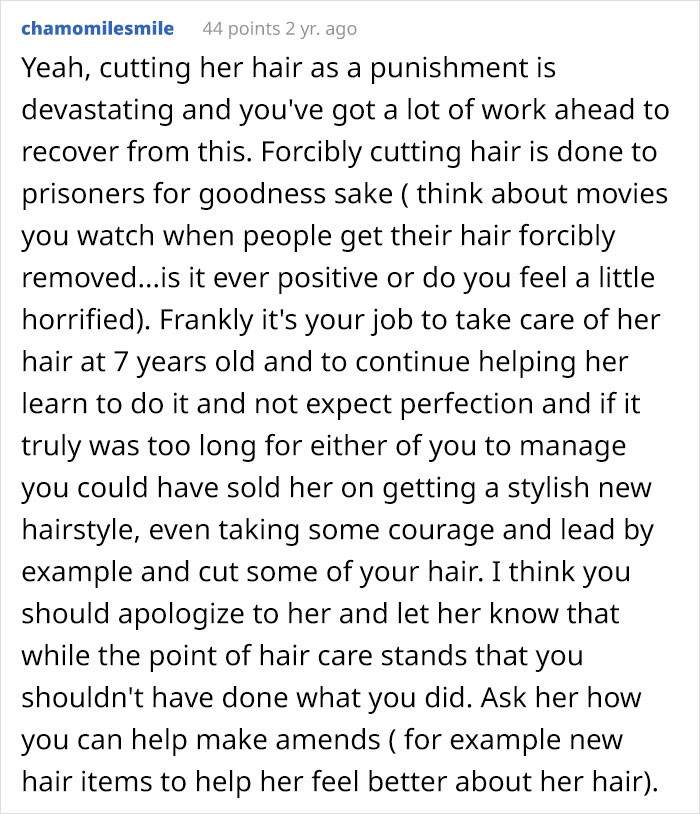 9. Point to be noted

10. Here is some wise advice 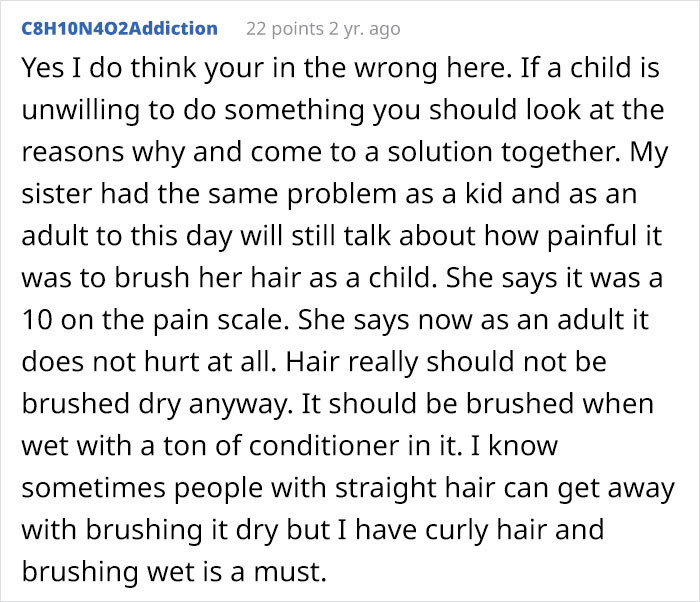 11. An apology can fix things here I guess, take her for an ice-cream or gift her something she want maybe? 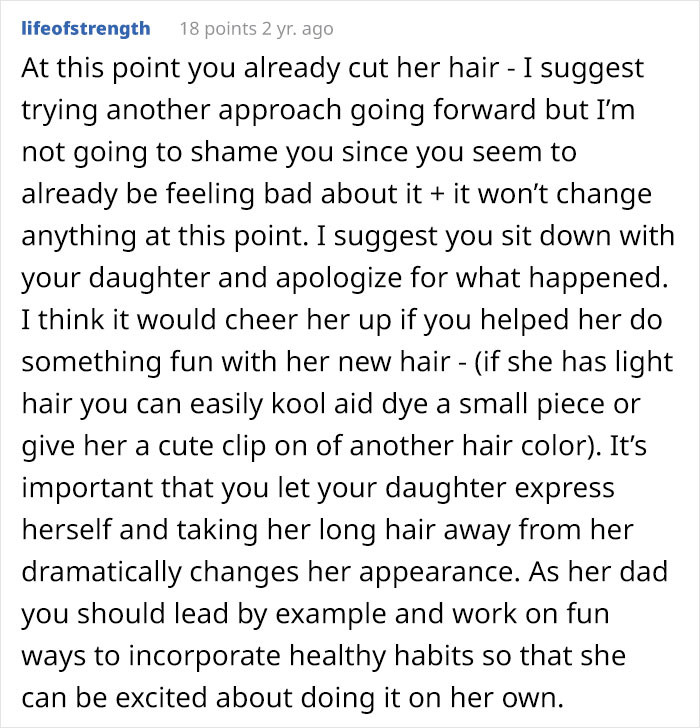 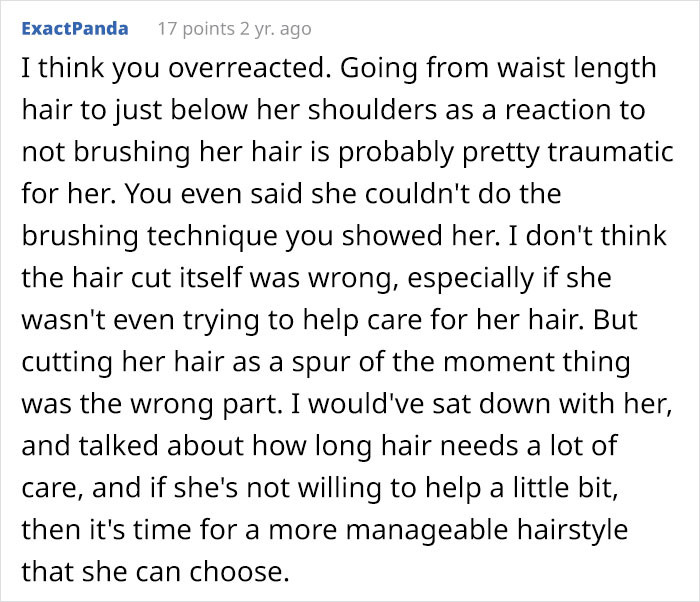 14. OP should have handled it in a better way 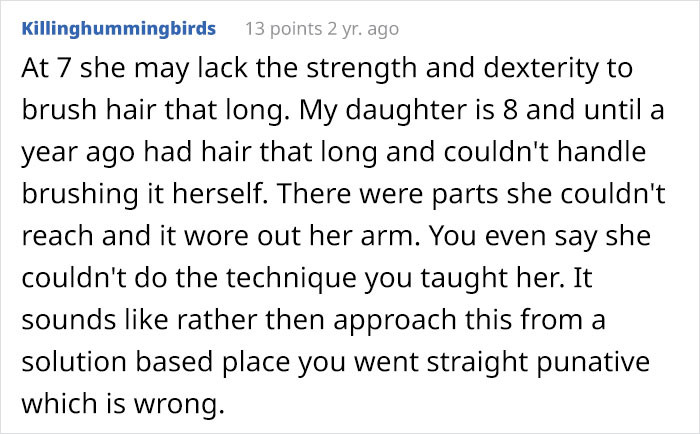 15. The OP provided an update and some further details on the situation. 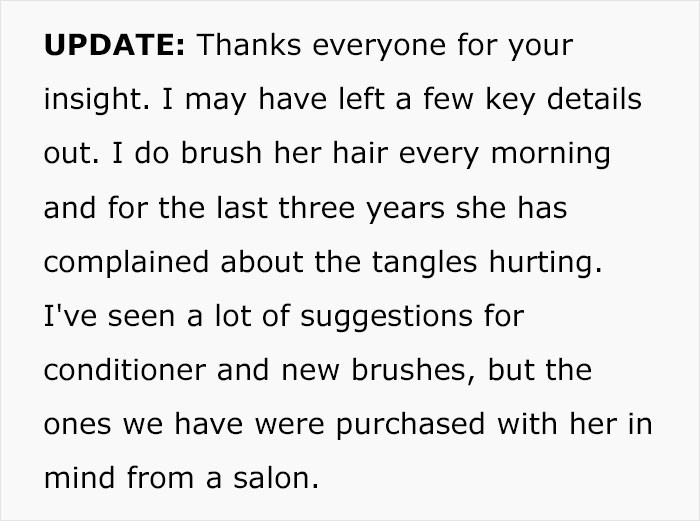 16. He clarified that he had been attempting to persuade her to cooperate for the past two years. 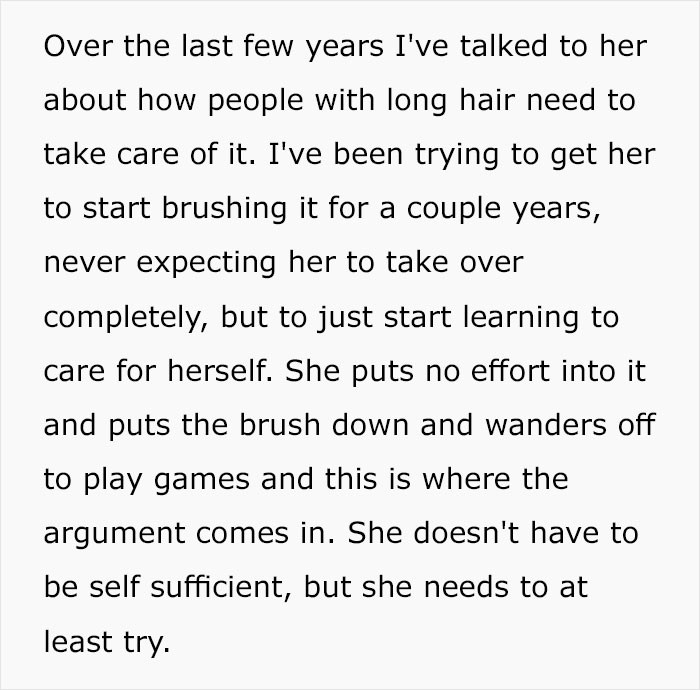 17. Not everyone is alike 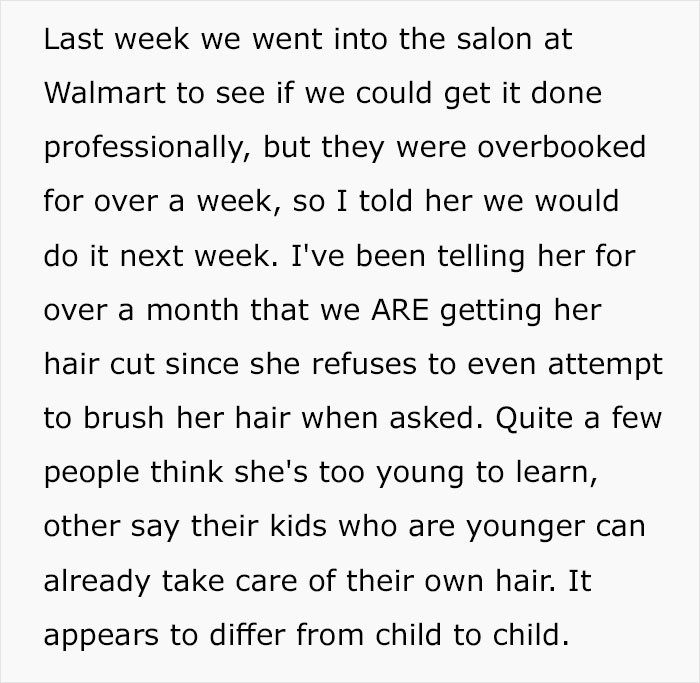 18. OP stated that he would never do such a thing again and has since apologized to his daughter.

19. That’s what everyone should do

20. OP thanked the community to help him clear things

What are your thoughts on how our OP handled this situation? Do you believe he overreacted, or do you believe his actions were justified?

One thing is certain: every parent makes errors. It can be difficult to know what to do in the heat of the moment, and none of us are perfect. Let us know what you think about this post in the comment section below, and don’t forget to like and share it with your friends and family. Stay tuned with Defused for more content. Thank You.