Disneys movies are, without a doubt, very entertaining. Every story is different with such unique storylines. There are so many details they added to the movie, that it makes you wonder how much it must have taken to create those movies. However, nothing can be perfect. Everything has its flaws and they can be made much better. An audience can gather up a lot of critique for a movie or anything that is being shown to them. No matter how much the creators try to perfect a movie, there will always be some people who have different ideas on how the movie should have been executed. Changes do not have to be something major, but something very minute as well. Those little changes can change any particular scene or the whole arching point of the movie considerably.

We have a few examples below and after reading them, It is pretty obvious that Disney could use some of these suggestions to improve their creations vastly. There will be a drastic change but it would all be with it. It would make the plots of the story more interesting than they are.

While most of us just watch the movies, voice our critique to our friends and move on with our lives, some people put effort into building their ideas and turning them into something critique. Critique can be either negative or positive. It can also come in form of new ideas that could be used instead of the original film. Not everyone can come up with good ideas that would fit the movie, but some people get stuck with luck and come up with interesting ideas.

Scroll down below to find interesting ideas on how some movies could be changed!

1. Who is Hercules’ actual mother? 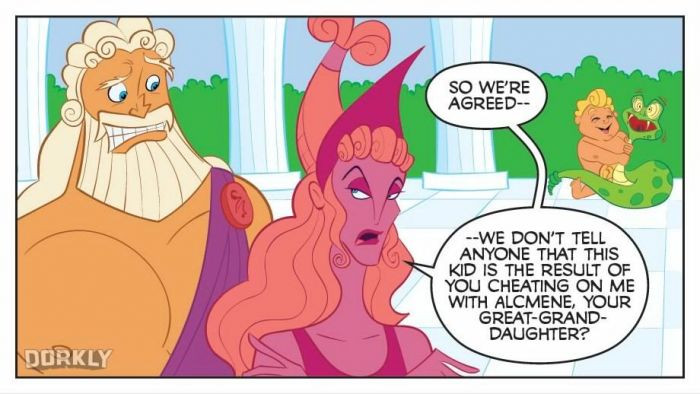 Till now, we know that Alcmene was the adoptive parent of Hercules. Alcmene is a foster mother to Hercules. The whole legacy would be hugely impacted if Alcmene turns out to be Hercules’ biological mother. It should be known that in greek mythology, according to the legends, Alcmene is the actual biological mother of Hercules. She was the great-granddaughter of Perseus. Zeus is said to have disguised as her husband. It is told that Zeus seduced Alcmene to be physically intimate with him.

2. Mufasa and Scar as siblings! 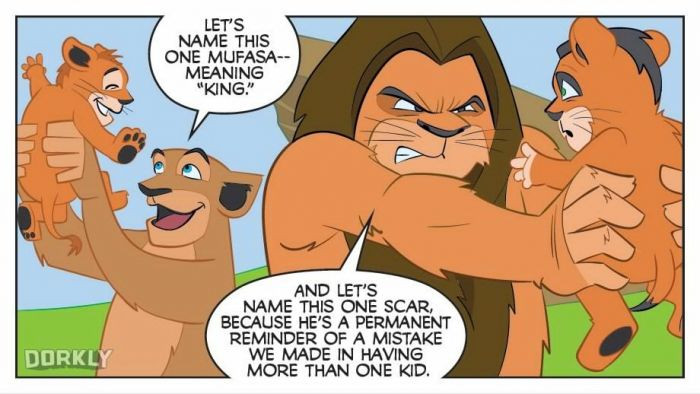 Oh my God! This would be such an interesting twist. This would have made much more sense. It would explain why  Scar and Mufasa remain in a constant enmity relationship. It would explain why Scar has always been resentful and hateful towards Mufasa. Mufasa was the favorite kid of their parents. Their mother deliberately gave Mufasa his name because it meant “King”. Mufasa already got the upper hand due to his name. On the other hand, Scar was named “Scar” because his parents thought of him as a strain to the family. He was a neglected child. He never got the love from his parents that Mufasa got. Mufasa got the kingdom too. It is hard to deny that this story makes you sympathize with Scar a little. 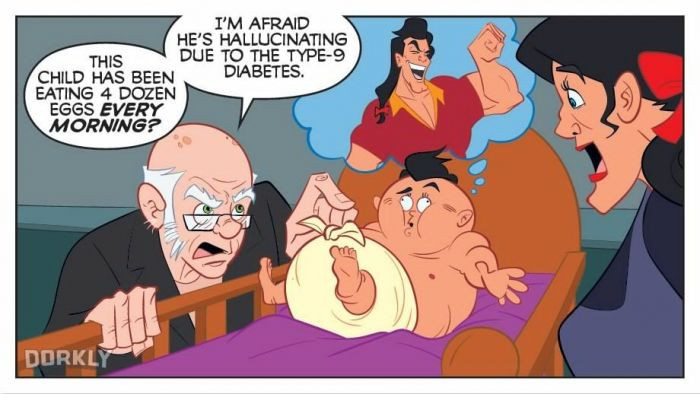 Gaston has always been the over-efficient kind. Seeing how obsessed Gaston is with his muscles and bodybuilding, it makes sense that Gaston has been consuming an insane amount of food since childhood. One thing that is interesting in this theory is that Gaston could have Type-9 diabetes. If Gaston was experiencing hallucinations, then it explains why Gaston was convinced that belle likes him too, while that was not true at all. It would also explain his insane behavior of locking Belle and her father. 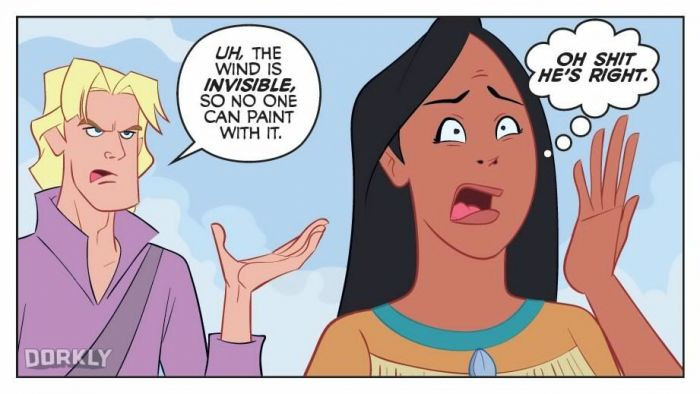 This is where Pocahontas receives the huge revelation!

5. Cinderella, an accomplice of the rats 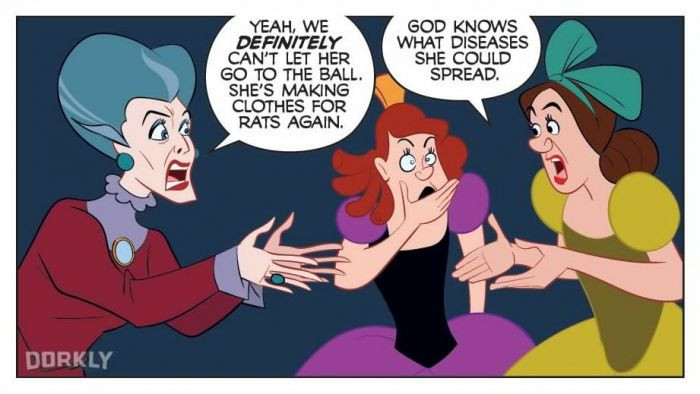 This would change the whole focus of the movie. The stepsisters and stepmother were not delusional and hateful about Cinderella. They were just under the impression that Cinderella was friends with the rats. Any sane person would have been completely taken aback knowing someone is “friends” with rats. Any normal human being would feel unpleasant being around someone who has rats in their presence. While Gus and other rats were surely very friendly rats, they were still rats at the end of the day. No one likes being around cats that much. Maybe that is why the stepmother and stepsisters were stopping cinderella from 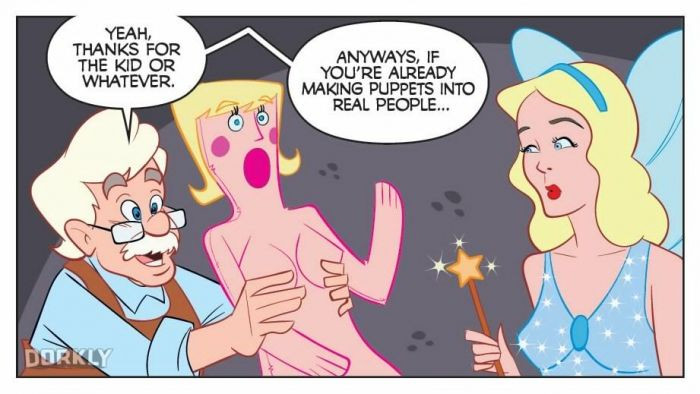 Ah, there are always people who cross the limits. It would have been so creepy if the old man was never interested in seeing Pinocchio alive. Instead, he wanted other mannequins to be turned alive. The look of disgust is pretty apparent on the fairy’s face. I have a feeling that instead of turning the mannequin into a real person, she must have turned the man into a lifeless object. That would be more appropriate! 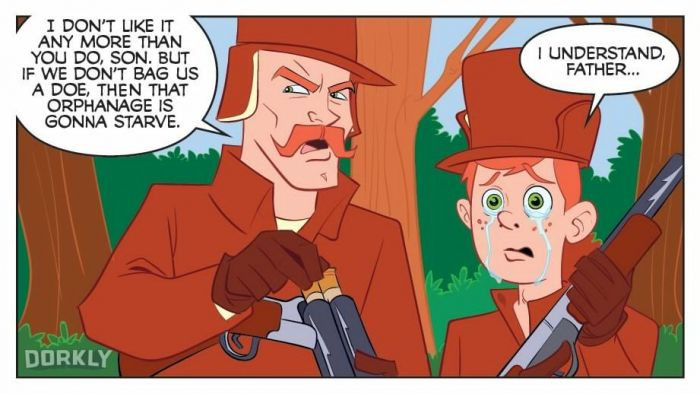 This is so sad! This is the dilemma of life. The hunters are probably only hunting to feed their families or in this case, an orphanage. Orphanages mostly do not have funds to purchase vegetarian meals because vegetables require refrigeration under hot weather. They have to resort to things like hunting. While hunters are painted in a bad light in movies, they may also have their reasons. In this scene would that the lead hunter feels bad about hunting animals too, but he has reasons to do so.

Wow, if these little changes are made to the movies, they will change everything. They would add more complexity to the plot and storylines of each character as well. The little detail about Scar being an unwelcomed and unwanted child makes a huge difference. It would show that Scar and Mufasa had their feud since childhood. That would mean that Mufasa was given the kingdom on a silver platter, which would have instilled a lot of anger in Scar. The story could build further. The new details about Cinderella’s stepfamily could also be built into something very interesting.

Do you have any such ideas about any of your favorite Disney movies? Comment down below and let us know!