The relationship between an employee and a manager is crucial. While you are being assertive as a boss, you need to stay cool and choose your words wisely. Because you are a little out of line, the employees may not be taking it calmly and it can turn against you. You should never deal with a matter than your employee feels unfair treatment towards them because that way, you are only going to get yourself a disadvantage.

u/SpoodsMcBeef has a story for us about his work when one day he refused to serve a customer as it was only 5 minutes left for closing time. The meat slicing machinery was into cleaning and could not be reused therefore he apologized to the customer that they can not serve. She made a bad review of the store and tagged him a ‘rude employee’ onto which his boss called him out and asked for overtime. His tone was rude enough to be unfair at that moment as he did not understand what was the actual story.

The redditor explains, “I explained exactly what happened two nights prior, as clearly as I’m typing it out here. The director is getting heated and begins to cut me off while I’m speaking, asking “Why would slicers be covered in sanitizer at 8:55? You’re scheduled to work until 9 pm.” I said yes I am, but seeing as I’m constantly being reminded not to get any overtime so I usually start cleaning them around 8:30 pm.

The director gets even more upset and raises her voice, “I don’t CARE, that’s not how it works! If you have a customer you SERVE them. And you’d better start making sure those shelves are FILLED before you leave or you won’t be working here anymore, now get out”.”

As it has been unfair at the employee’s end, he wanted to teach his manager a lesson. The rest of the story is down below, read till the end to know what happened next.

2. They had to clean the machinery at their required time 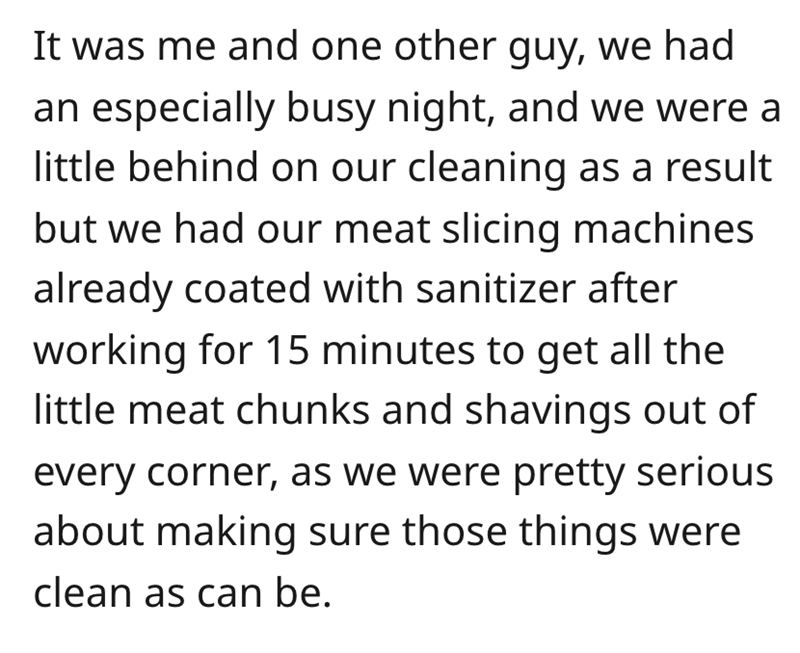 3. The customer came exactly at 8.55 and demanded freshly sliced meat. 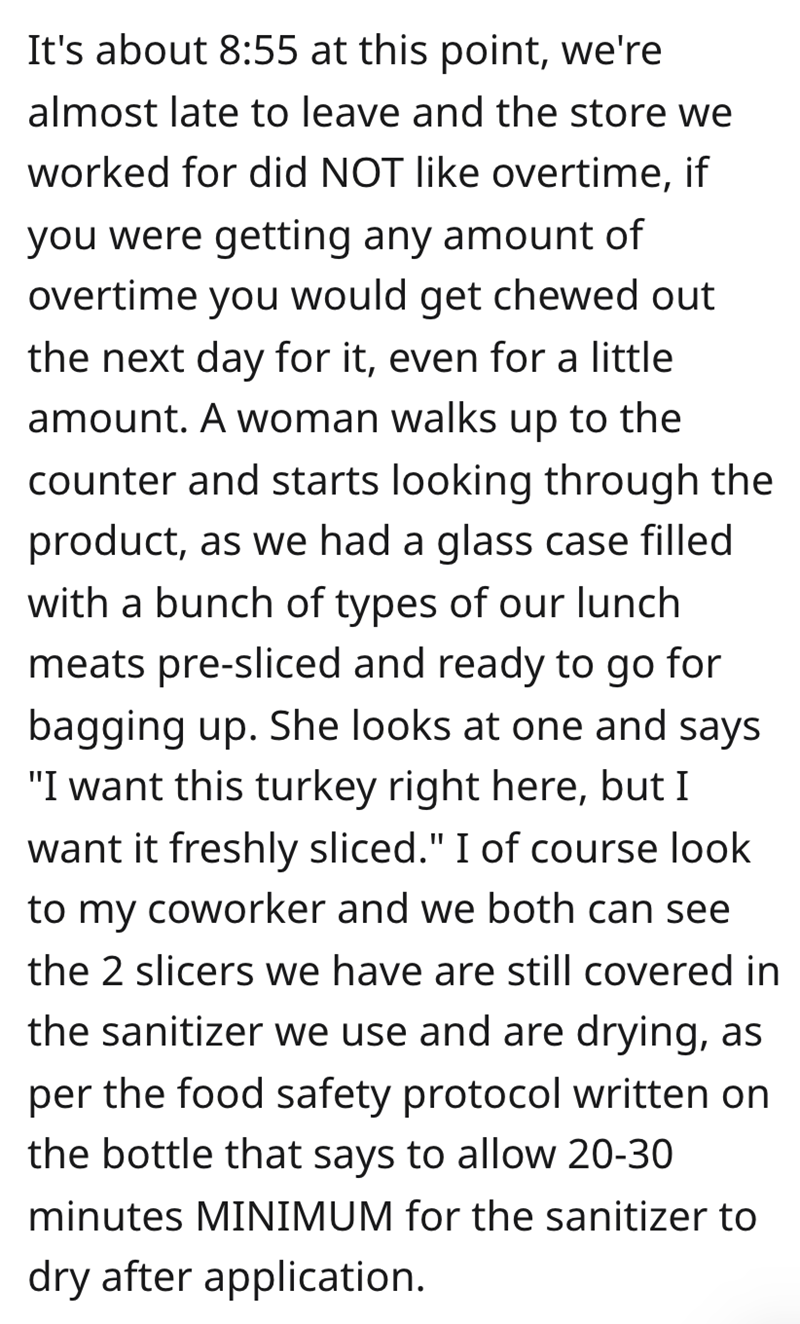 4. This is where the bad luck begin 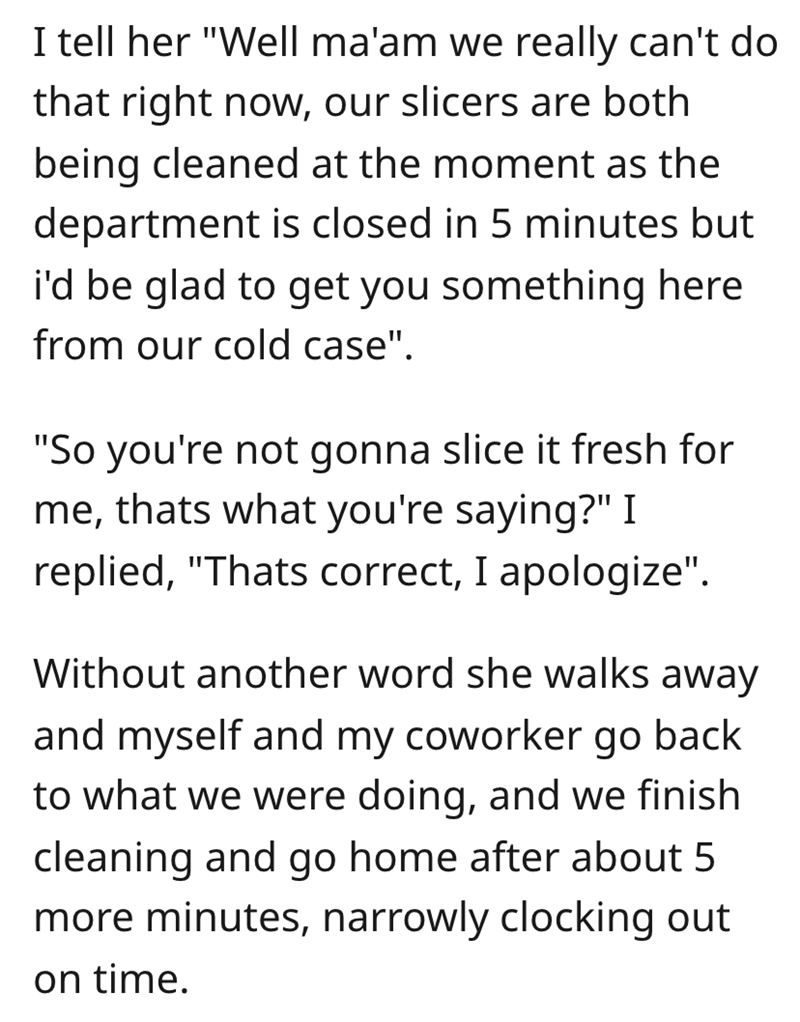 5. The woman made a 1/5 star review and the manager was not happy, asked the employee for explanation 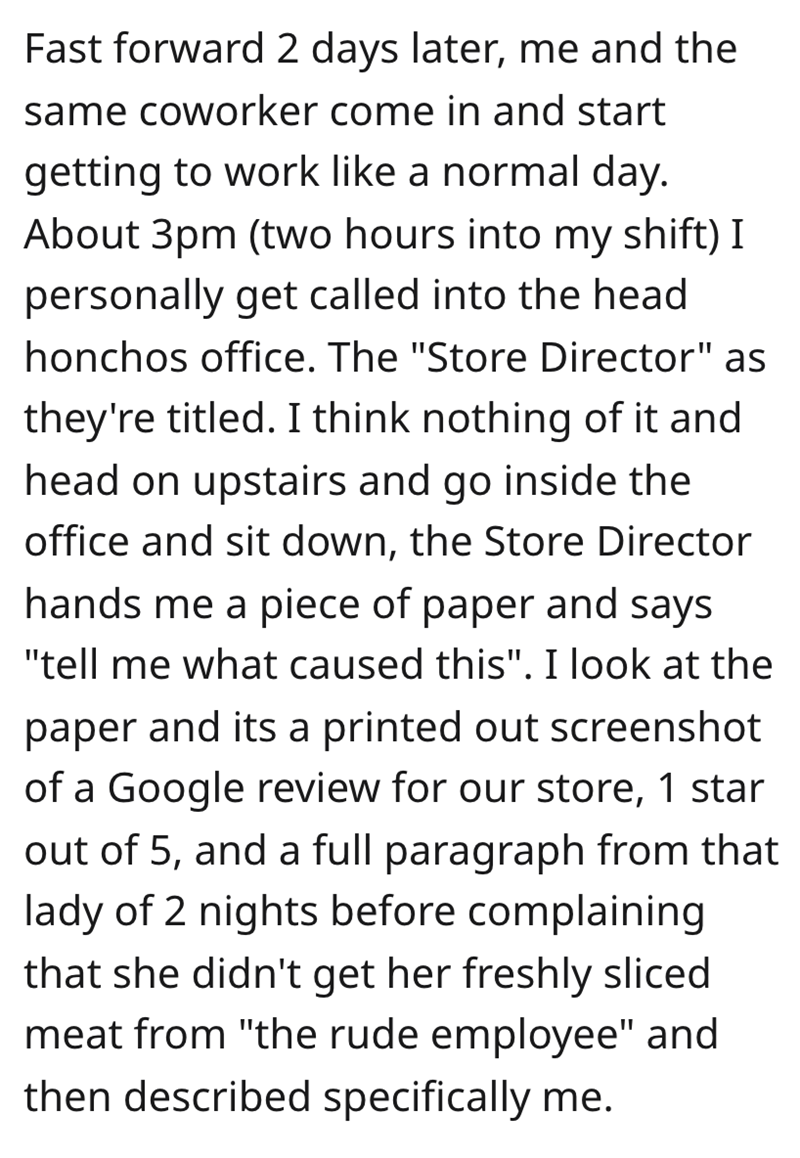 6. This is where the moment heated, the employee did not take it pleasantly 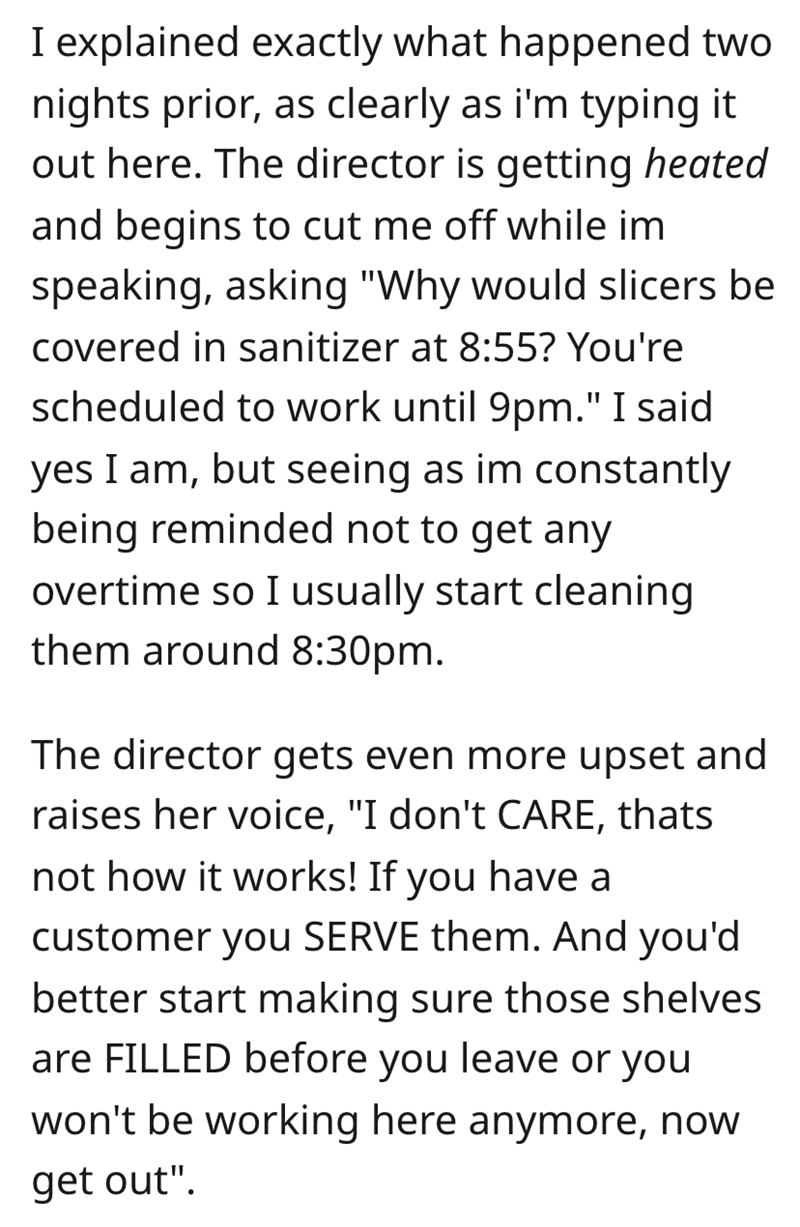 7. Both the coworker and the employee now knew what to do after this 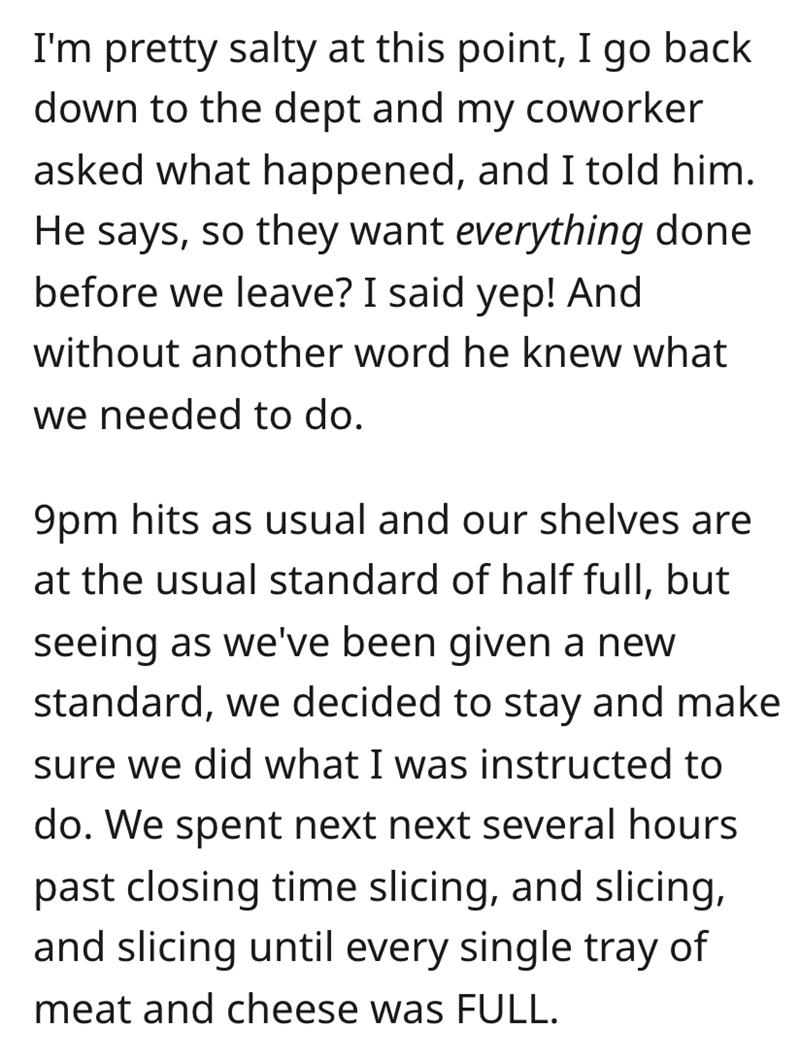 8. They sliced everything and did not leave a single shelf empty 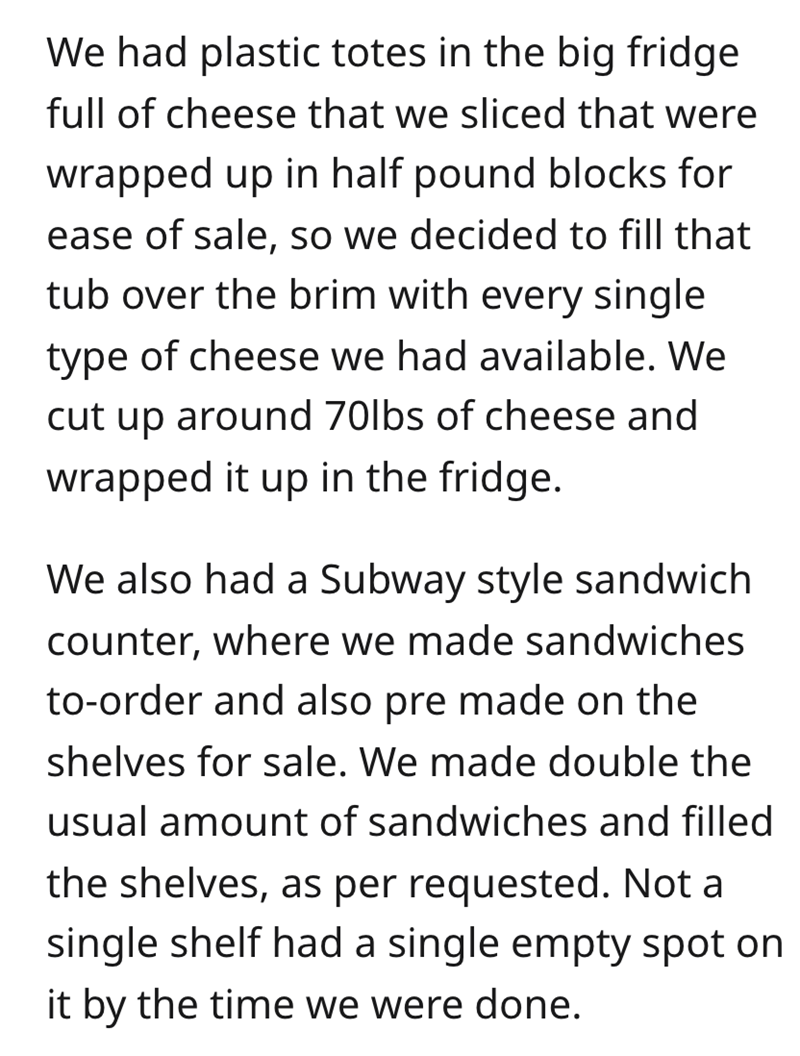 9. They came after the overtime the next day, the manager now asked them to clean at their usual time, in short, he got on line; a lesson taught! 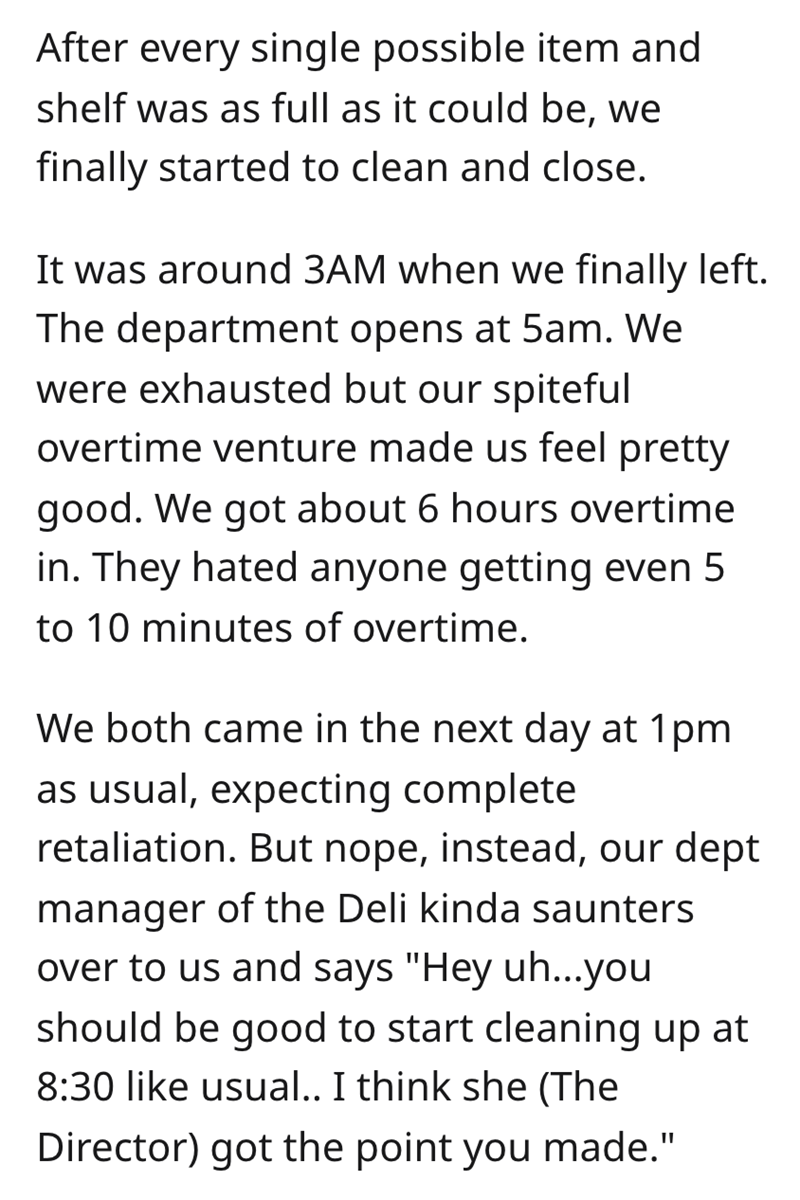 10. He even left the store later and was happy about it 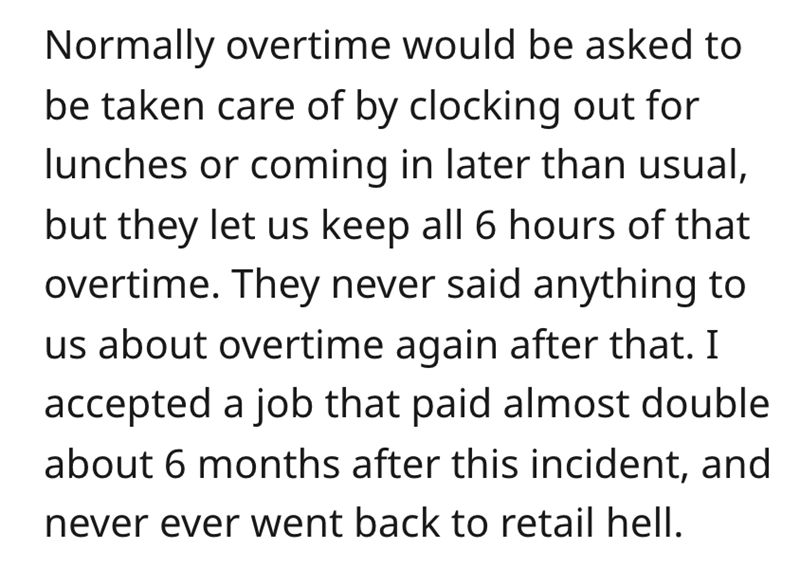 11. People had so much fun things to say in the comments 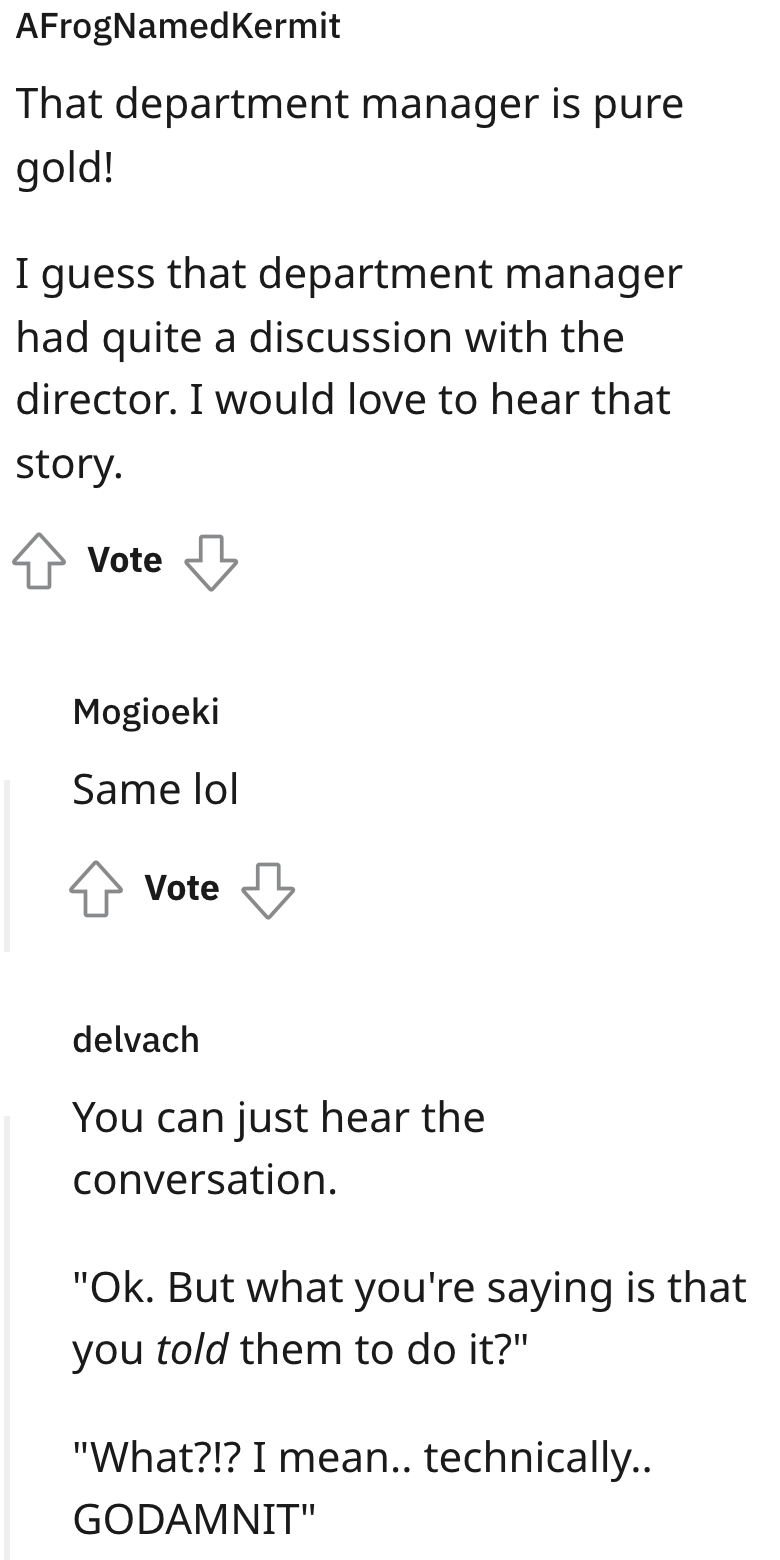 12. I can not agree with the last comment more, gold. 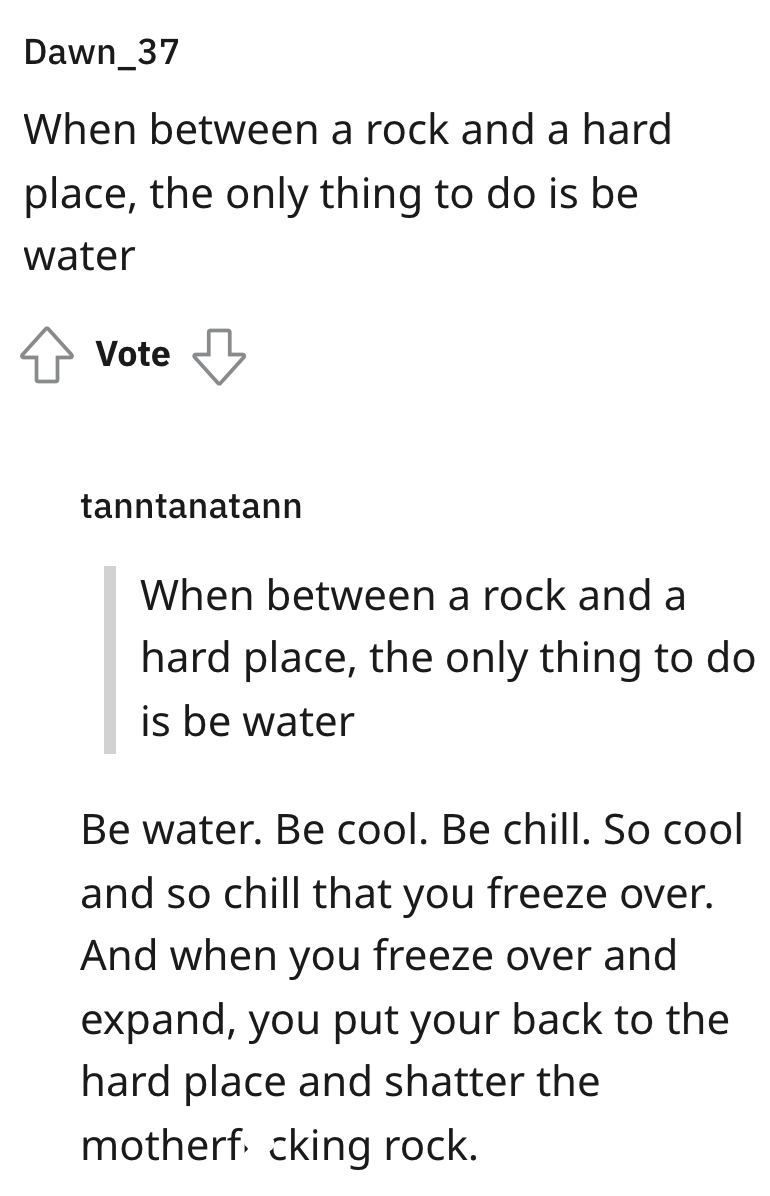 13. The resolve was applaudable indeed 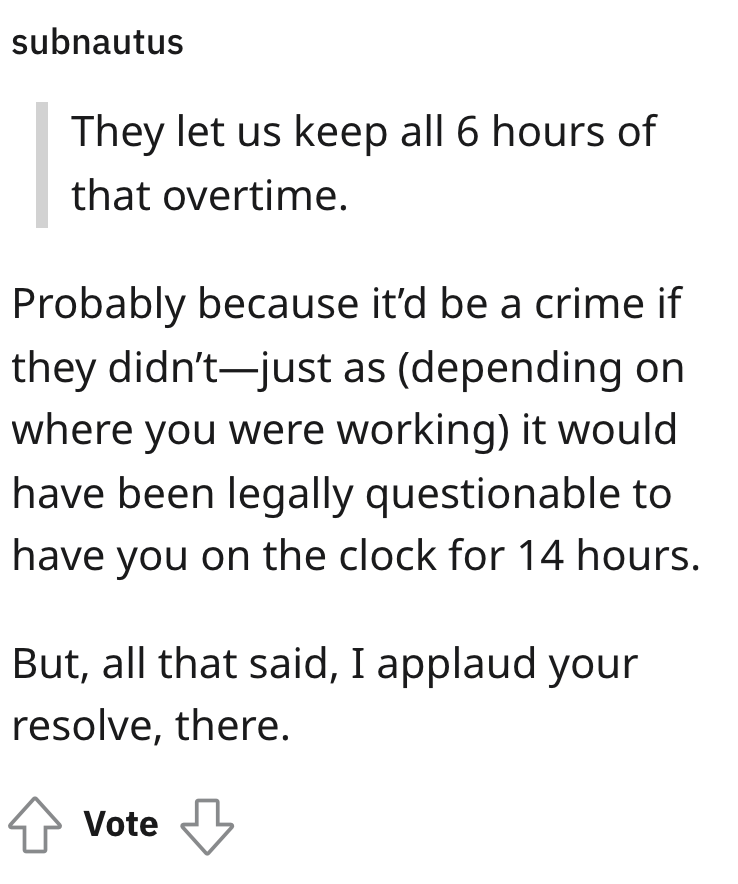 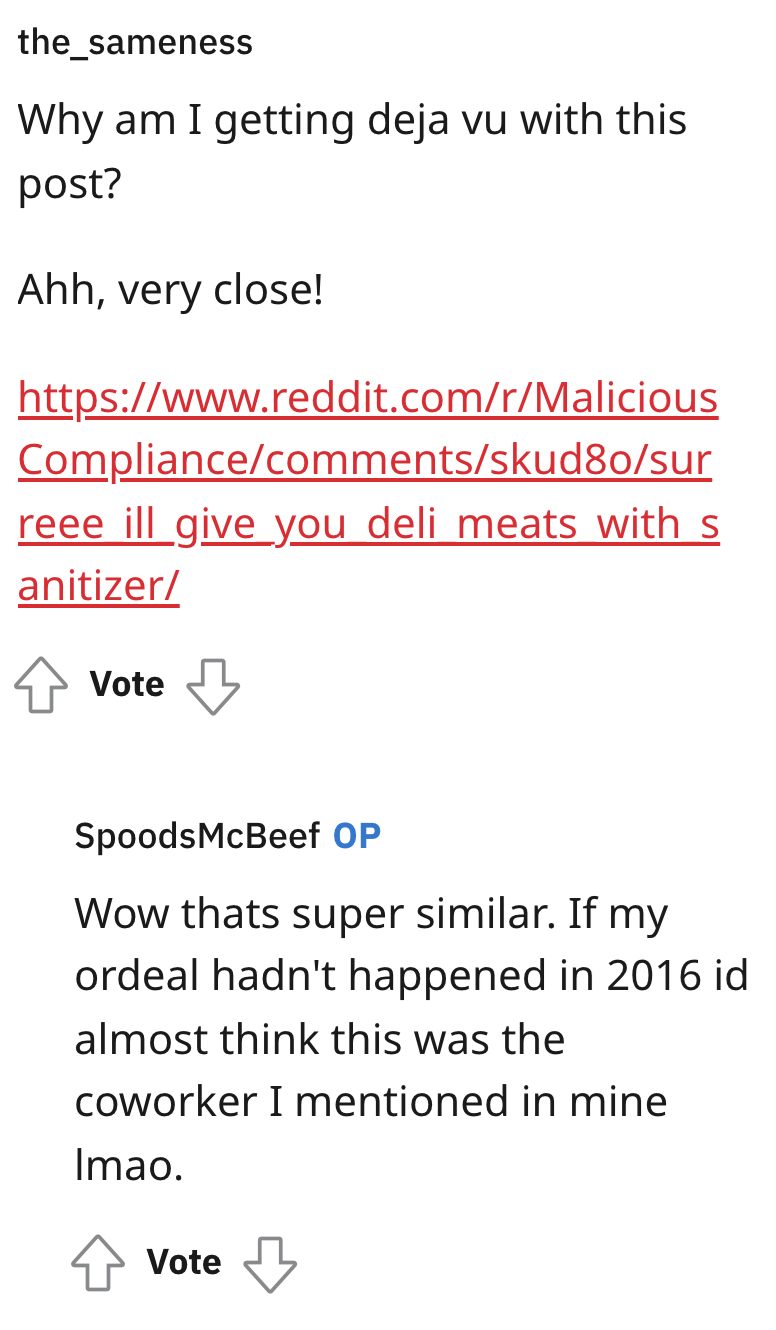 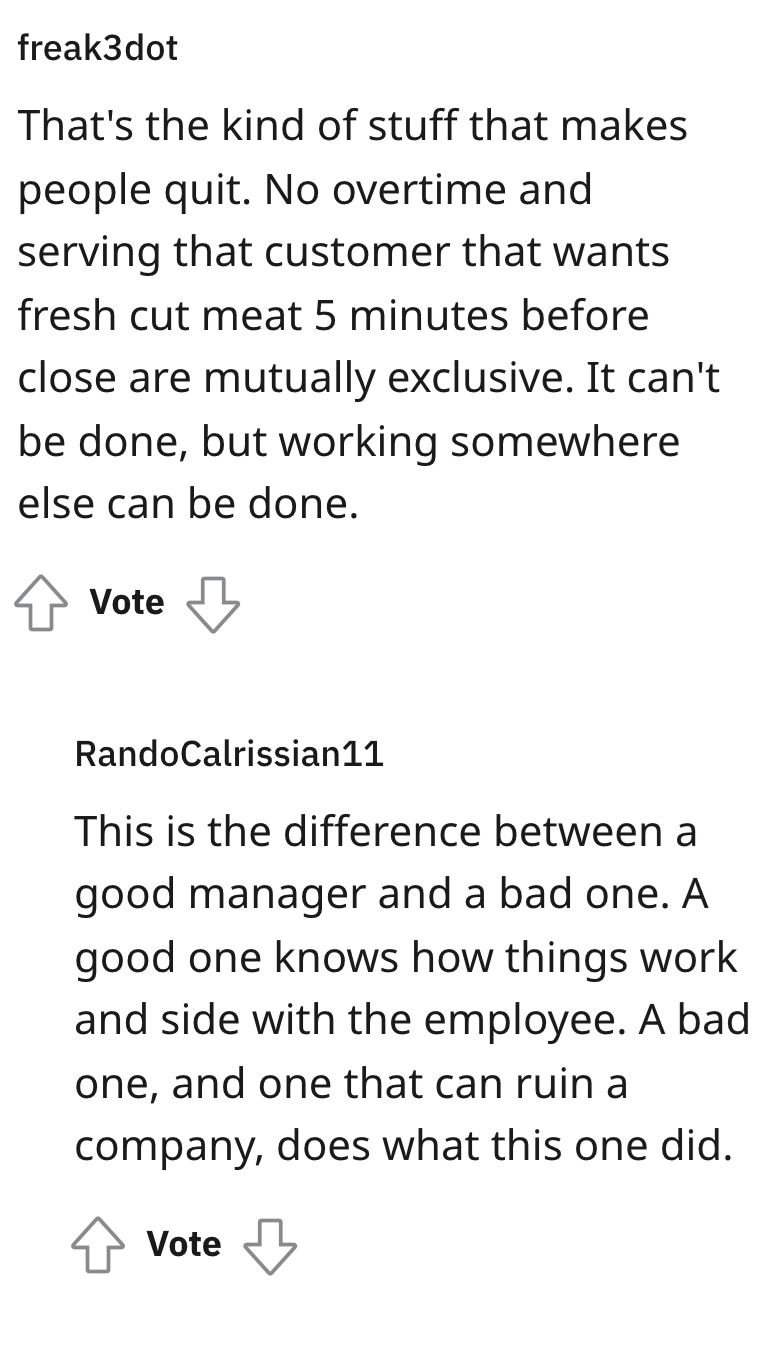 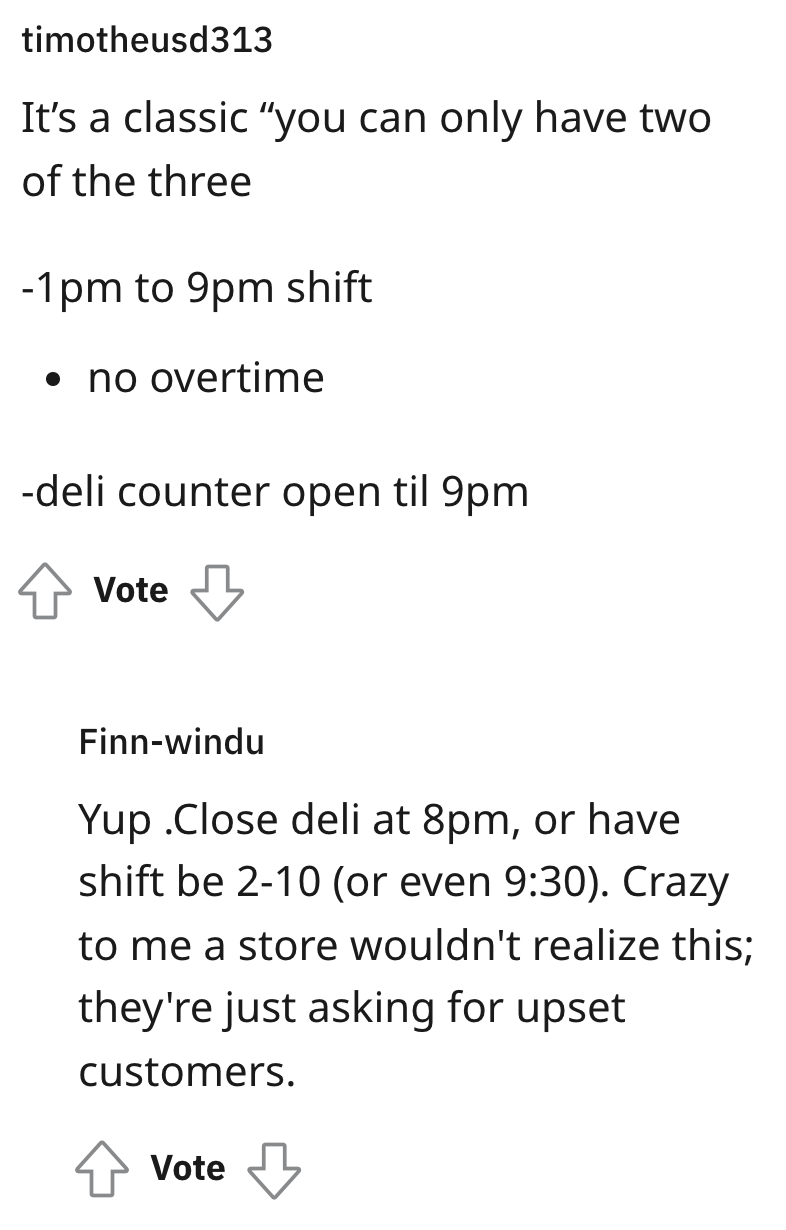 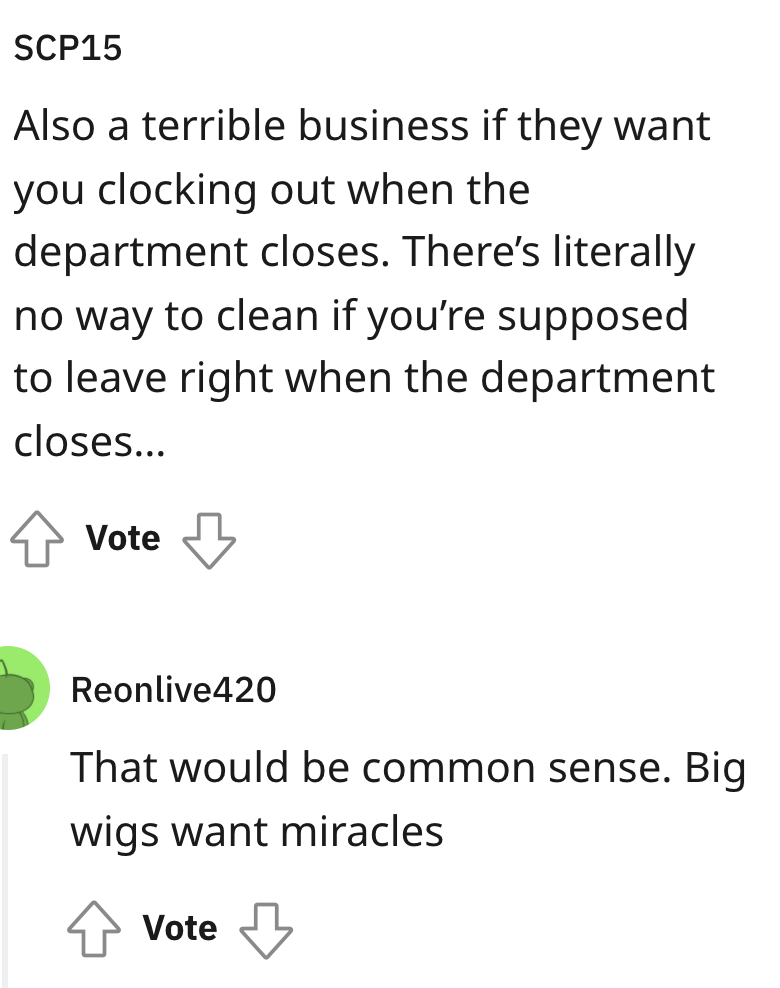 So, what do you think about this story? What the employee did was genuinely right and the manager also learned his lesson as he was being too rude and maliciously complying at his end. Don’t forget to share in the comments if you had a similar experience and quit working somewhere, we know you would have some amazing stories. Stay tuned to defused for more entertaining content.