Resentment in a relationship is a recipe for disaster.

We all know this, and yet we still stick with people all the while we are all well aware it is only going to go downhill. I suppose it is in human nature to see the best in people. However, we are not here to talk about human nature. Today we have a story of a woman who inherited four million from her family. I don’t know what your thoughts are, but I’d say she is set for life if she knows how to safeguard the money. Although we also know this sort of sudden money can lead to people around her always begging her for stuff and guilt-tripping her if she doesn’t oblige with their request.

And you could say that is exactly what is happening to her boyfriend. They have been together for more than one year, and it seems he has started resenting the fact that she can quit her job and just do whatever she wants while he has to work 5 days a week to pay his side of the rent. While I am not saying his though process is correct, I can see what side he is coming from. After all, it is not easy to see that while you labour away. But this is a huge red flag for the future of their relationship. And you can find more about the story by scrolling below and taking a look for yourself.

While the yearly ‘income’ does sound like a lot, she can make much more by depositing into a savings account of sort and earn interest. 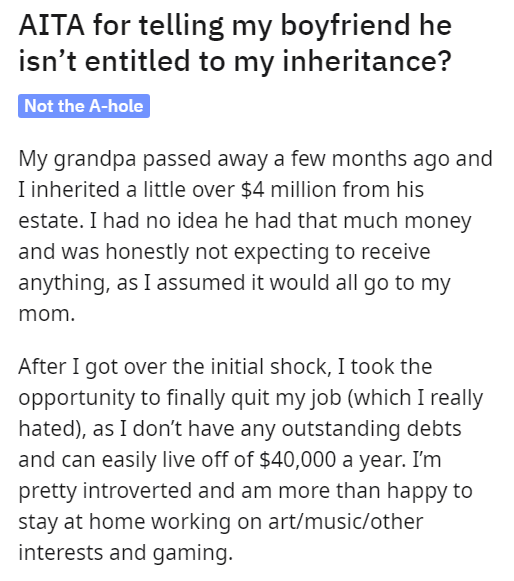 Simply put, she should not be expected to cover everything even though she has the means to do it. After all, they are not married. 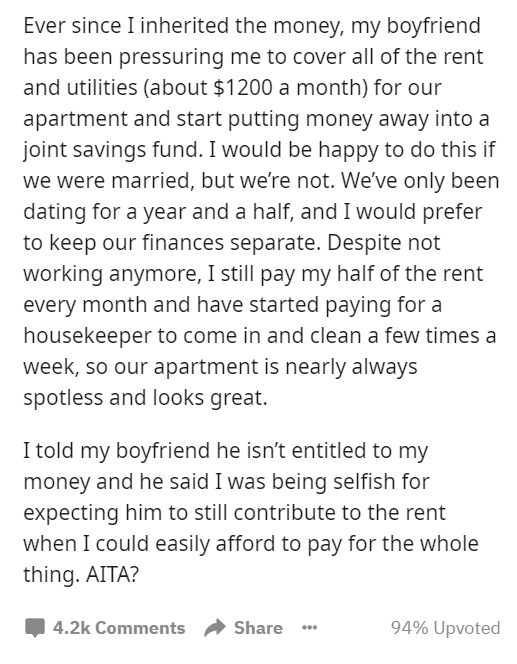 And the comments agree and many have even suggested hiring a lawyer to sort this stuff out. 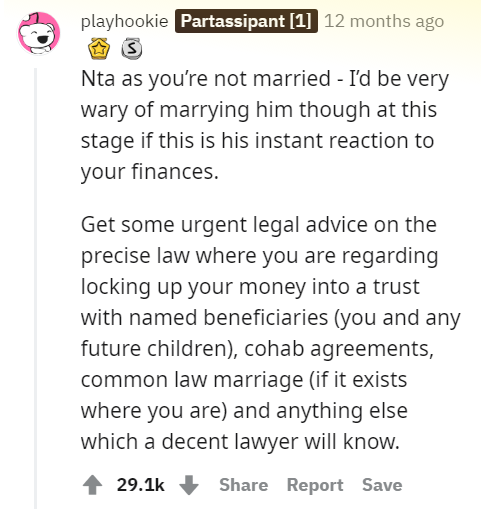 She does desperately need a lawyer if she doesn’t want to blow through all her inheritance. 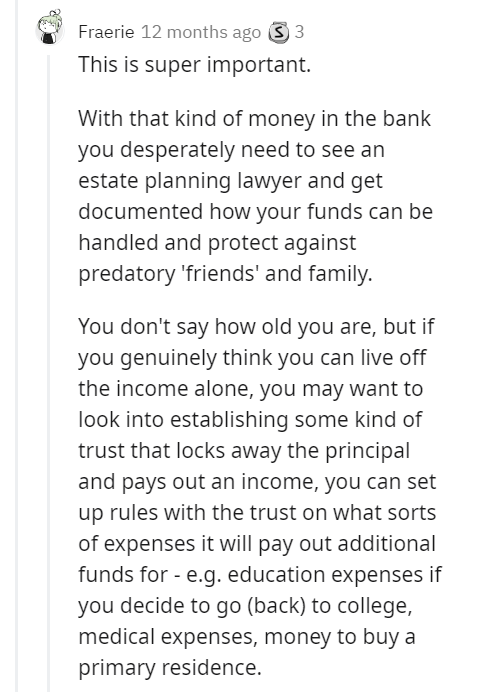 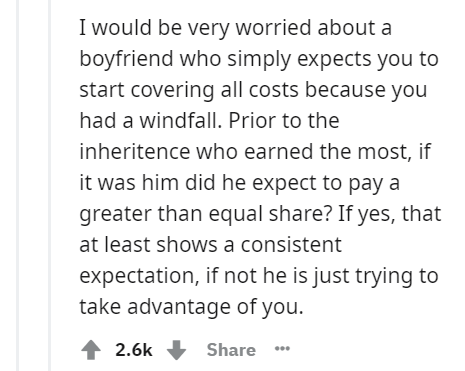 I completely understand the BF perspective. This is a relationship over a year with cohabitation, so it’s pretty serious by almost any standard. The OP has essentially made a choice that puts the BF in the awkward position of being expendable. OP has decided to restructure an entire lifestyle without including him. In that regard, OP carries some AH burden. –DtownBronx

Even though it is somewhat understandable where he is coming from, that does not make him right. 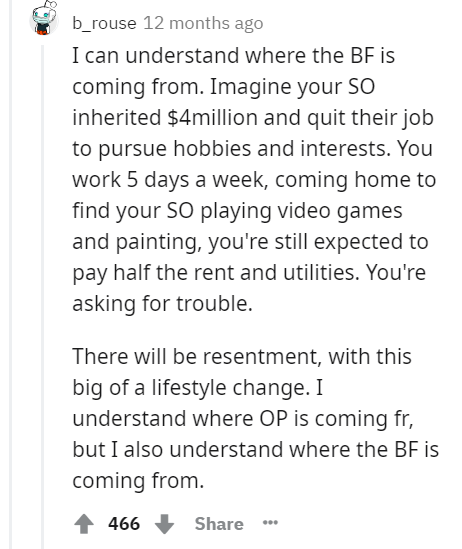 Only a suspicion? I would say this is sadly a guarantee. 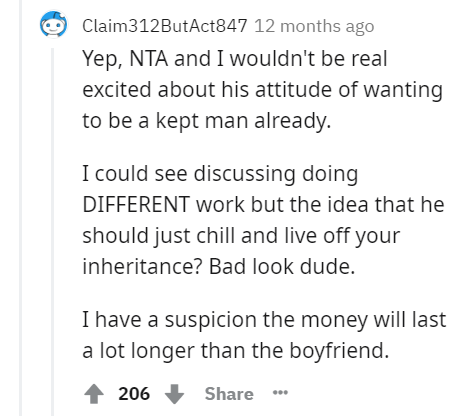 That is an idea, although it depends on if she can see her future with him. 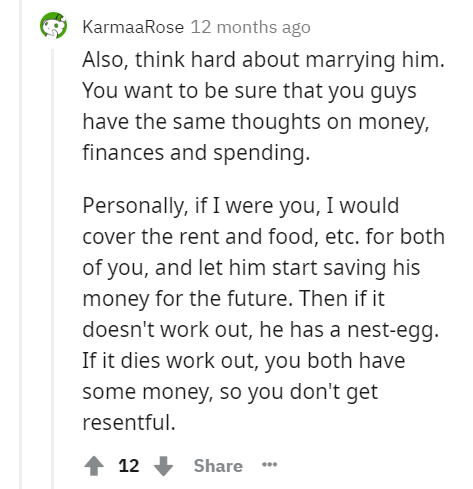 They haven’t even been in a relationship that long, and yet he expects so much. 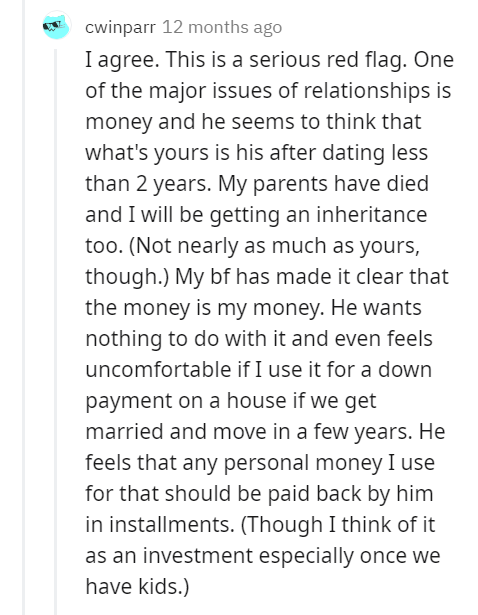 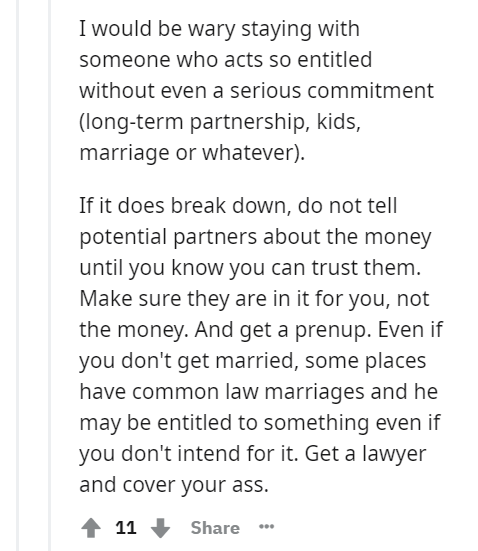 She needs to have a long hard think about her future and whether it includes her current boyfriend. 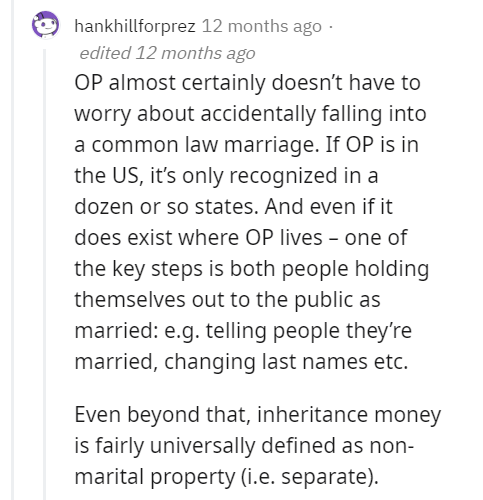 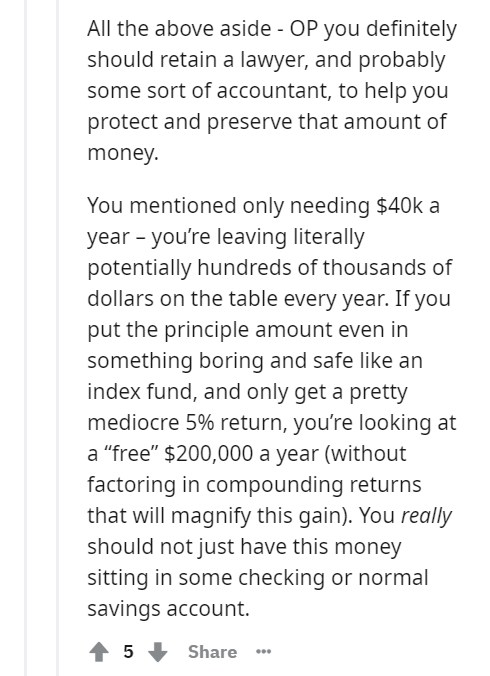 Buying a house would be first on my list if I had that much money. 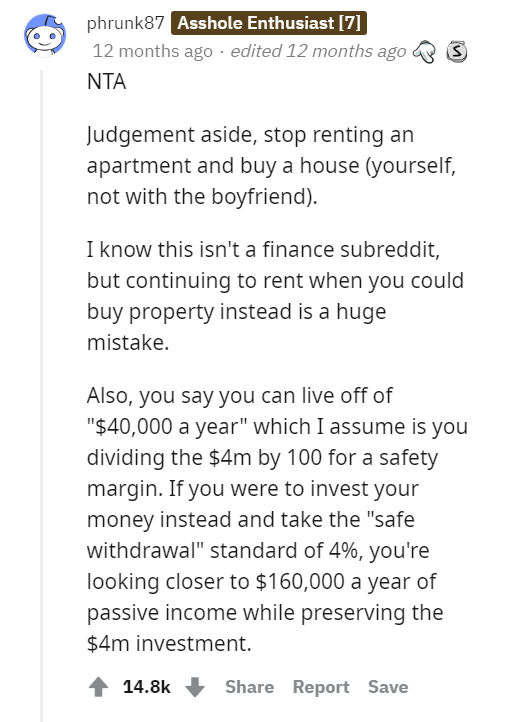 I don’t think she’s an asshole for not sharing. But I also think that there’s a big disconnect here that people seem to be ignoring in favour of “he’s not entitled to anything, and he’s showing how greedy he is, so you need to dump his ass yesterday.”

OP just had a major lifestyle change. OP’s boyfriend did not. Can you imagine how incredibly shitty this is from the boyfriend’s point of view? Your girlfriend inherited a bunch of money, quit work, hired staff to cover chores, and now spends her days living out her dreams. While you still work your same old 9-5 job. There’s a huge income gap now, and lifestyles are going to reflect that. Of course the boyfriend is jealous! And anyone on here who’s says they wouldn’t be is lying. Does that make the boyfriend entitled to her money? Of course not. Does this mean OP and her boyfriend—if they want a future together—need to sit down and have a very frank discussion about finances and financial and lifestyle expectations? Hell fucking yes.

Just because they aren’t married doesn’t mean that they aren’t in a relationship. They fucking live together. It’s at least a bit serious. And they need to communicate like adults. –tadpole511

What are your thoughts on this story? Do you think the boyfriend is in the right or is he expecting too much? Comment down below and let us know.