Everyone has family problems.

I don’t think I have ever met someone who has said that they had a great home life. But maybe I don’t know the right people. However, most families do have some sort of problems, and usually you talk it out because it is your own blood, and you want to fix things. Although sometimes the issues are more deeply rooted, and you can’t solve it no matter how hard you try because the other person is unwilling to compromise.

That is what happened here. This guy’s father left him his family home in his will and he was ecstatic about that. However, his step-mother, brother and sister-in-law moved in the house without even asking him first. Now, he is not a teenager, he is 19 years old adult so already this is wrong. But they took it a step further and wouldn’t leave no matter how much he told them to. This has left him no choice but to sell the house altogether to his uncle.

You can check out the whole story by scrolling below and taking a look for yourself.

So they are technically step-brothers if you want to get technical about it. 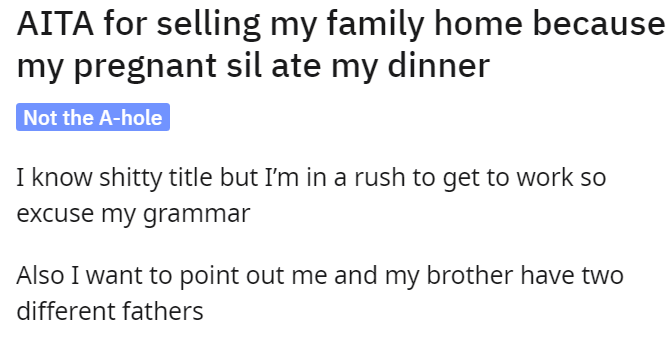 Apparently they didn’t even ask him even though it is his house, and she should have no say in it. 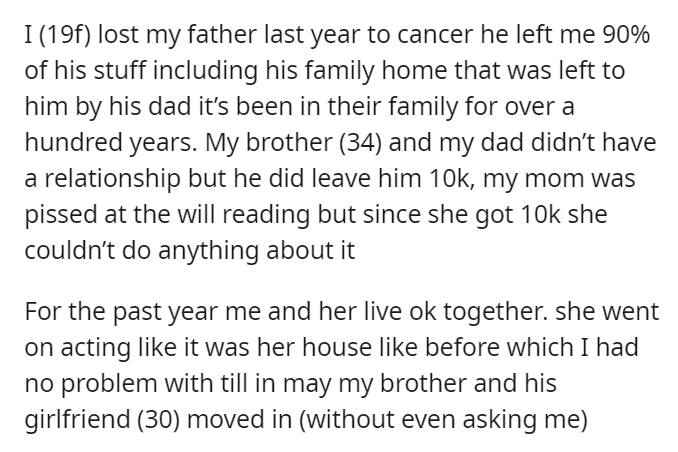 Honestly, this is plain rude even if she is pregnant. 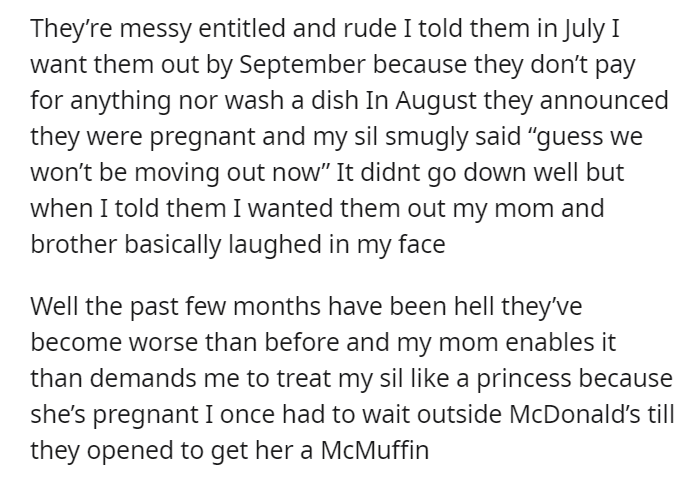 It is pretty clear that she is using her pregnancy as an excuse to act like a complete a**hole. 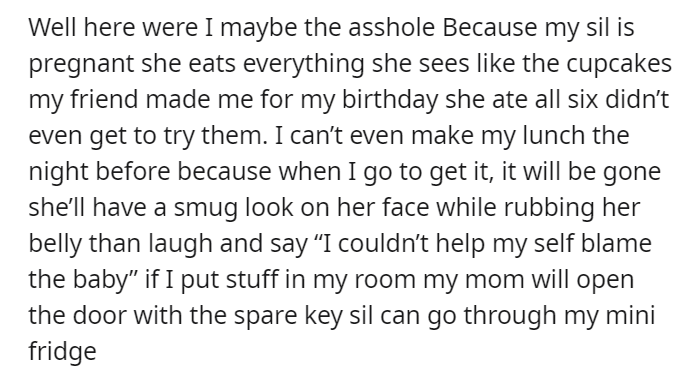 There is a limit to how much bull a person can take before they reach their breaking point. 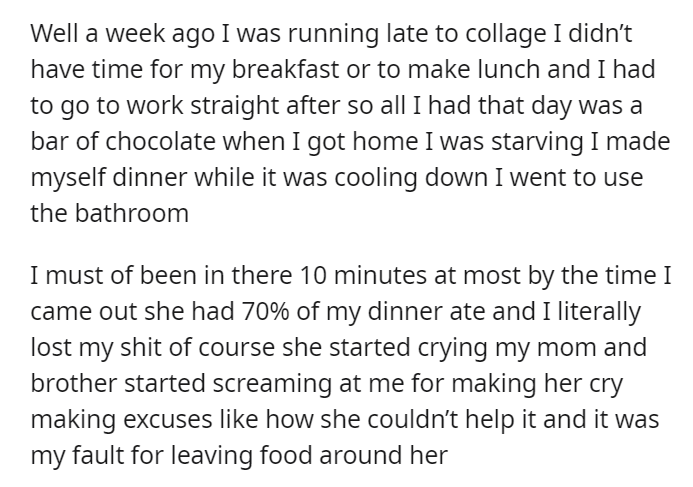 NTA. I’m 8 months pregnant, so you can tell her from me that it is not excusable. I love my food, especially at the moment but being pregnant does not give you an excuse to steal food or act like an a**hole

I would say that it’s important she has housing sorted as she is going to have a baby who needs shelter, but it doesn’t have to be with you. Furthermore, I think it is 100% understandable you wouldn’t want to live with someone so disrespectful and rude. –Laurajenn

If they didn’t want to be kicked out, they should have been respectful of his house in the first place. 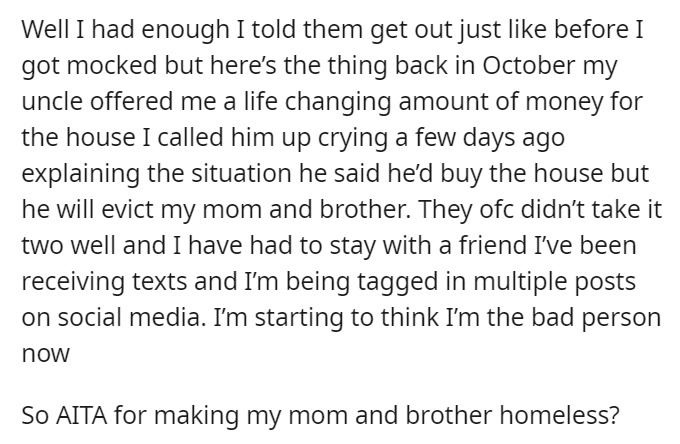 There are also several reasons why he wants to sell the house even if it is below market. 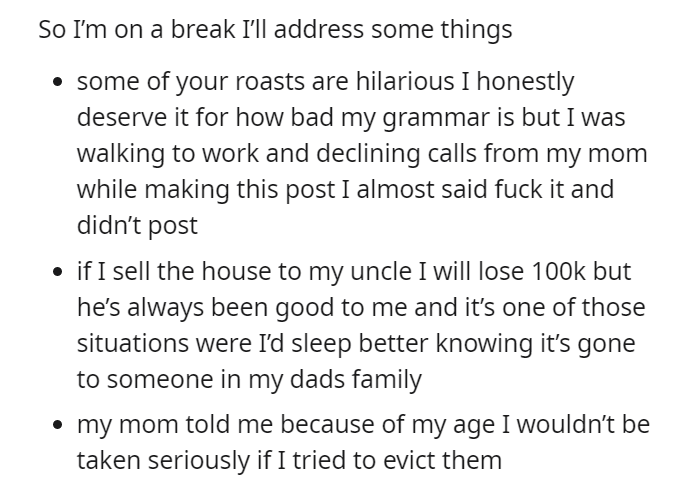 He clearly just wants to do what is best for everyone while still standing his ground. 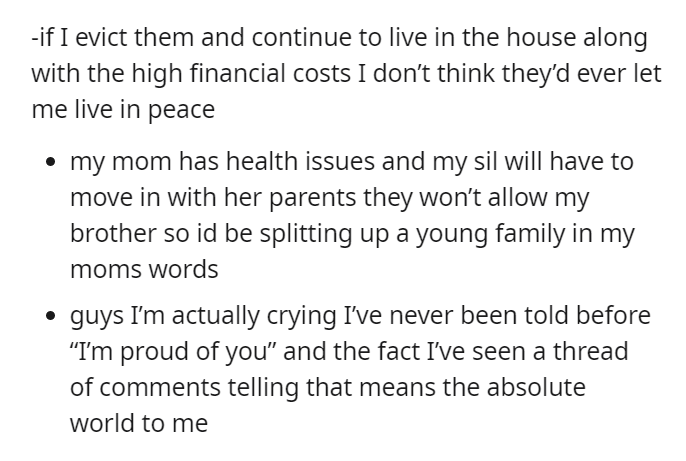 However, people have advised against making such an important decision without proper thought. 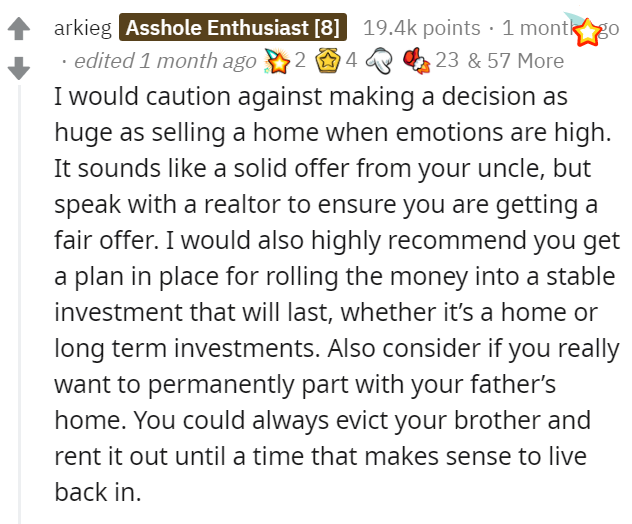 And the offer is below market as well, so it is not worth it. 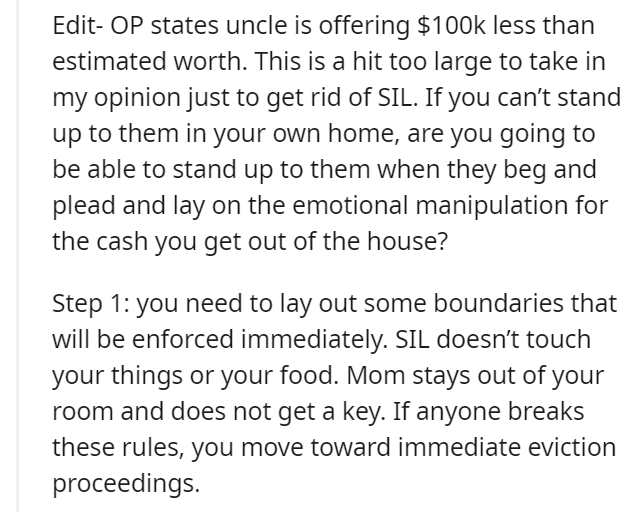 And from what I can see here, he would need to understand the law to deal with this side of the family. 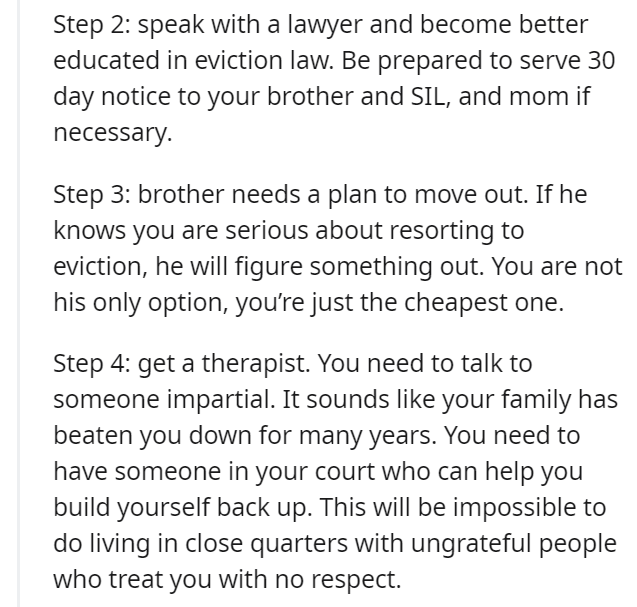 Rather than outright selling it, he could rent it out for a little while. 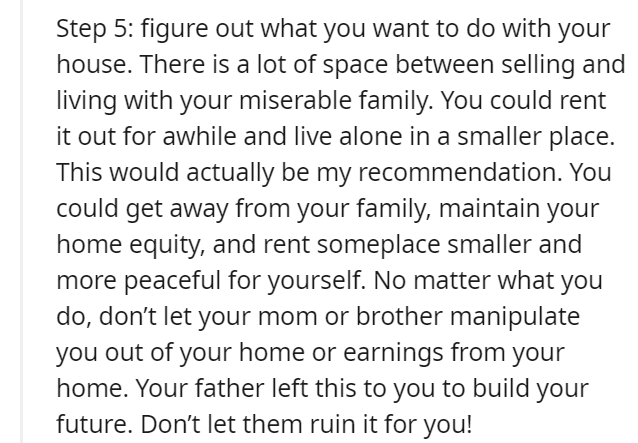 I would get the house valued independently by several agents. If your Uncles offer is reasonable and in line with the valuations then take it, but don’t feel you have to sell to get rid of them. Serve them a notice of eviction now, it will be easier for the Uncle if you do sell if they are not still there. Go to a solicitor and get them out! NTA Edited to add, whilst you are there, get a restraining order against them, they sound like wackos.

Edited to add after seeing updates, do NOT take your Uncles offer, he is only looking out for himself, if he genuinely wanted to help you he would offer to go with you to a solicitor etc to have them evicted, it’s disgusting he’s taking advantage of his brothers child who is suffering. I recommend reassessing that relationship as well. –Psychological-Pie938

I would agree although ultimately it is his choice. 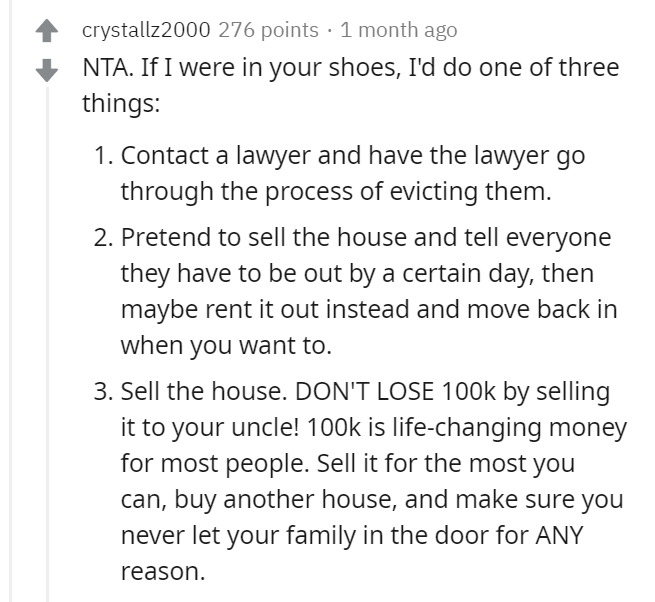 What would you do if you were in his shoes? Would you sell the house, so the Uncle can deal with the mess or rent it out? Comment down below and let us know.