You’ve probably found yourself in a situation where you’ve been given the day off from work and you just want to relax and not think about anything job-related, but then your boss calls and wants you to come into the office. Yes? Did you have second thoughts about saying no? Or have you ever felt compelled to say yes despite your reservations? One worker on a Reddit thread found themself in a similar circumstance, and when the worker told the supervisor no, it culminated in a confrontation, the situation escalated into a fight that ended with the boss terminating the worker! Here, we’re delving into a workplace saga that began when a manager had a full-blown breakdown via text messages sent to an employee who refused to come into work on a day of rest. And, the employee posted images of all of the chats on Reddit’s “Antiwork”, where others responded with overwhelming support, claiming that this type of behavior on the part of the management was simply not acceptable.

1. This seems like a normal conversation between a worker and a boss. 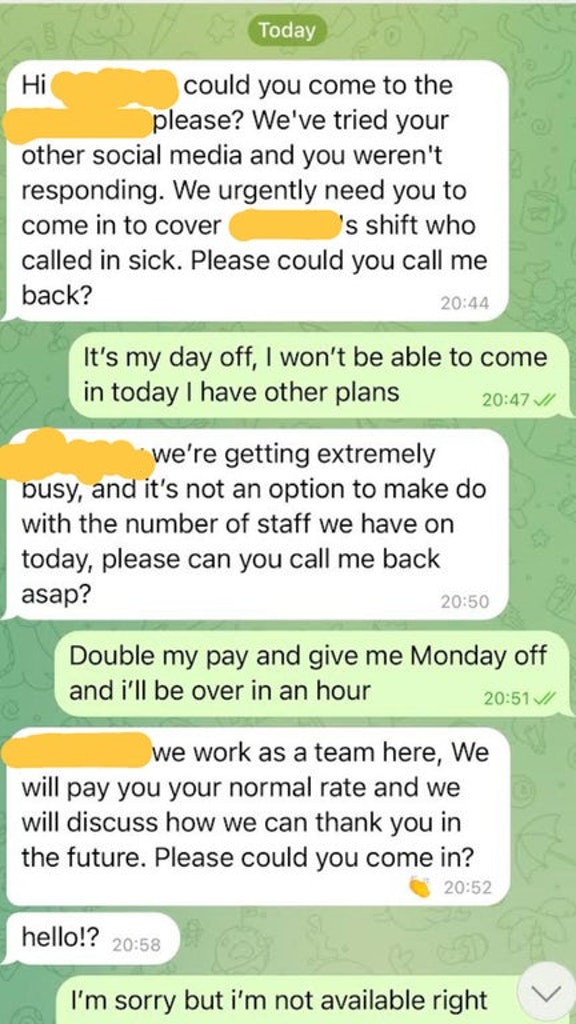 The employee politely declined, stating how they would be unable to report to work. After all, it is a holiday, and the employee has the freedom to decline any requests.

2. Only $20 extra?! And then the manager demands a higher standard of behavior?! 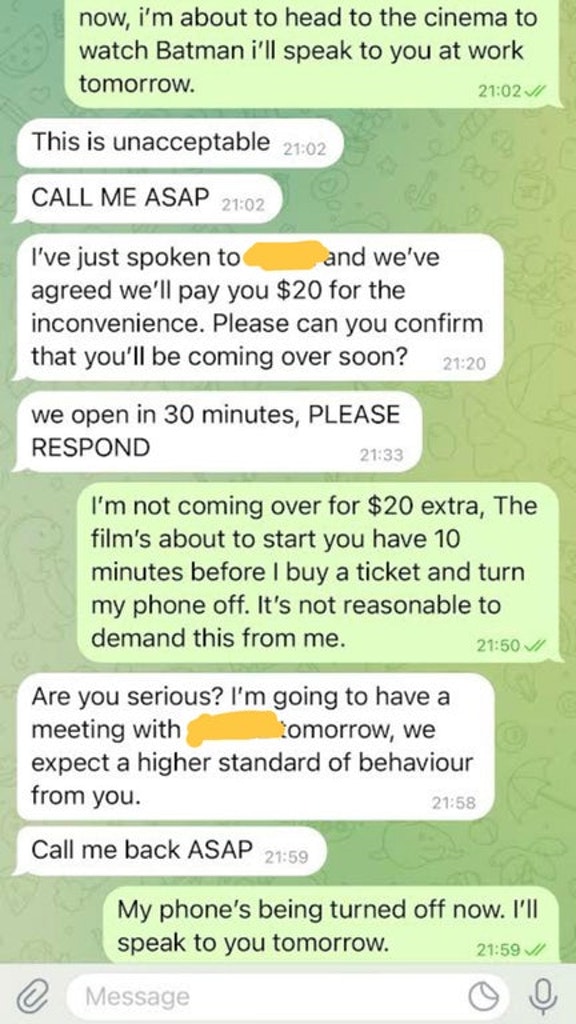 The manager is continually pressuring the employee to come into the office and does not appear to accept a simple “no” as a satisfactory response. “I’m not coming over for $20 extra, [t]he film’s about to start you have 10 minutes before I buy a ticket and turn my phone off,” the worker’s response was justifiable.

3. The manager had the audacity to check whether the film was being screened! 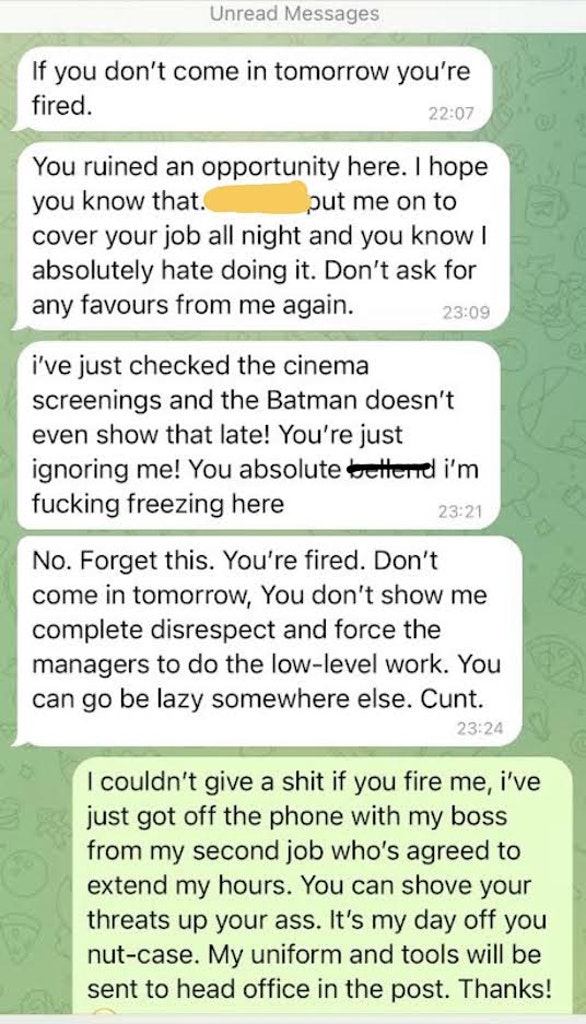 “[Redacted] put me on to cover your job all night and you know I absolutely hate doing it,” the manager penned.

The manager was successful in finding someone else to fill in for the shift. However, because the manager was unable to comprehend the basic rights of an employee and believed that saying “no” to a boss even on a day off was preposterous, the management decided to fire the employee. In addition, the employee’s reaction is absolutely spot on! “I couldn’t give a s–t if you fire me, i’ve just got off the phone with my boss from my second job who’s agreed to extend my hours. You can shove your threats up your a–.” the employee wrote.

4. When the pictures of their talk were on Reddit, the manager was even more enraged! 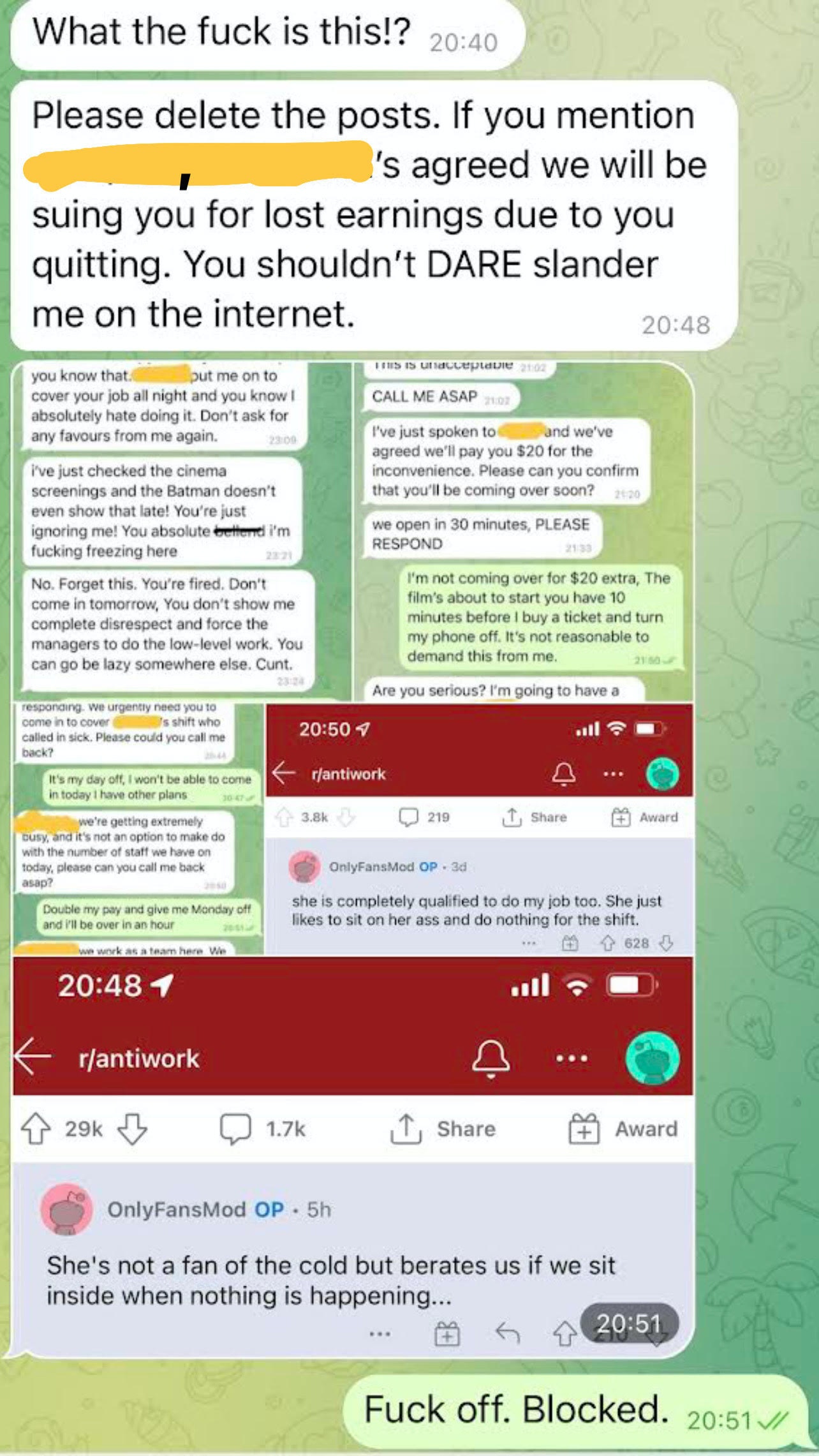 And there’s the manager at it again, threatening the employee! Many red flags were raised on the manager’s end, and we hope that the employee is doing well today!

Well… this was certainly a story to tell in the future. There are numerous instances in ordinary life in which a large number of employees are subjected to this type of behavior on the part of management. As a result, the best course of action in this type of situation is to assert your rights. Like this bold Redditor. Do you have any workplace saga that you would like to share? Feel free to share with us!