It’s amazing to hear stories of lost pets being reunited with their families. We have got one such heart-warming story for you to make your day happier.

Meet this beautiful cat Clive, she’s a Norwegian Forest cat who was gone missing for 14 months and finally got reunited with his family. Surprisingly she was found in a healthy condition, even much fatter than before. It turned out that Clive was living in a pet food factory, that was actually two miles away from their home. He was living his dream life feasting upon unlimited cat food and it seems like he enjoyed himself. 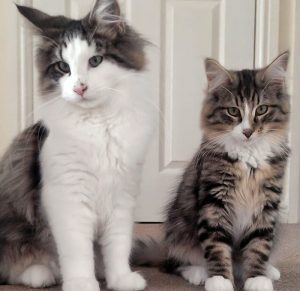 Clive was disappeared in December 2014 and left his owners Tanya and Jonathan in great grief. They were extremely sad for her. The couple and their two years old daughter Elizabeth, tried everything to get her back. They started a Facebook appeal and put up the posters around the whole neighborhood in search for Clive, but sadly there was no response. It made their heart broken. 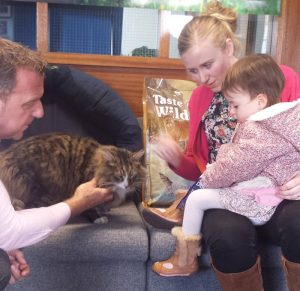 Tanya said ” Clive used to be very naughty and playful and she often liked to go outside. We thought that somebody might have taken him in as he was such a beautiful cute cat. Workers in the pet food factory started noticing that their cat food had been going missing, and the workers found the evidence of cat-burglar living in the warehouse. So they tried to catch that cat-burglar, and Clive was caught after 14 months living his dream life. After that the staff took Clive to a vet who scanned his microchip, revealing that this naughty cat was registered to a family name Irons, who lives just two miles away from the factory. Now it was time to get this cat home. 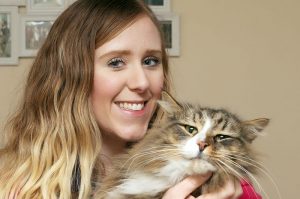 Tanya said ” Clive was just nine months old when we lost him, he was a lot smaller then. When Clive got back to us we were astonished to see how big and fluffy he has become. He’s been living the life of Riley in that pet food factory. We heard Clive was a bit smelly when they caught him, but he seems fine now. He recognizes us, he’s just fatter now.” 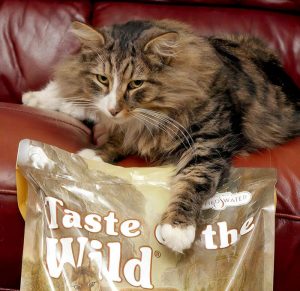 ” I think he has been enjoying himself living his dream life. Before he was gone missing he was not that much of a big eater but he always had to eat his food quickly before his brother stole it from him. He was glad that he did not have compete with them to eat for once. Now Clive appetite is huge and he eats a lot comparing to the time he was gone missing. Whenever I have to go I have to leave him with a bucket of food, he just won’t stop eating. We are not going to put Clive on a diet though. Clive is a perfect cat picture”. 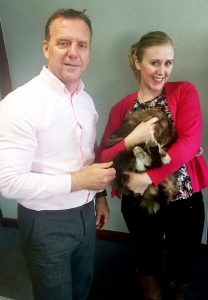 Now, the family has reunited with the over eating Clive, who has been fat twice his size before. We all are happy because they are back together again. We hope they never get apart if this happens otherwise Clive would get back in a shape of tiger due to eating soo much. Let us know your thoughts on this story. And don’t forget to tell us if you have ever heard any such incident. Comment your feedback below.