There is a secret story behind every character of iconic movies.

Have you ever looked at a character and wondered what the director would have in mind to create such a unique character? Where the inspiration would have come from? Well, these are some of the hidden secrets that make a movie successful. Have you ever wondered how the scary dragon growl was recorded in The Hobbit or how the black hole was recorded in Interstellar? Wanna know? Then you are just at the right place because we have a collection of movie-making secrets that will leave you speechless. So, scroll down!

The iconic film “The Hobbit” was shot at 48 frames per second (fps). Some of the movie theatres couldn’t display the movie in 48 fps due to technical reasons and had to change it to 24 fps. 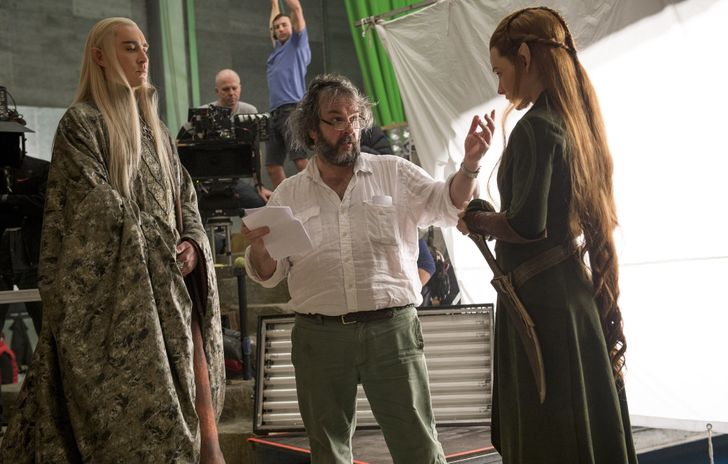 The movie-makers had plans to only release two parts of the movie but the movie was missing some important parts so they changed the plan and filmed another part and put it in the middle of the movie. That’s how this movie turned into a trilogy.

For shooting, different locations of New Zealand were used but they build a whole new city called Dale. This city had several moveable buildings so they can easily move it from one place to the other. But they had to destroy the city in the third part of the movie that they created with their own hands.

Motion Capture Technology was used to create the characters of Gollum and Smaug. Special sensors were used for movements and facial expressions. 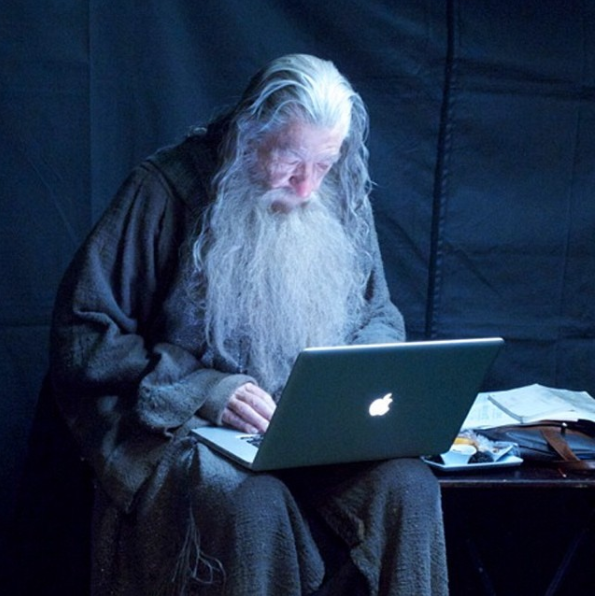 Benedict Cumberbatch who was the voice of the dragon, Smaug, had to crawl, bend, and breathe with flames to show the power of the dragon. The sound designer of the film, David Farmer was looking for a sound of scary dragon growl. He recorded the sounds of a hungry pig one day and mixed this sound with his daughter’s roaring. He adjusted the sound to make it sound like a dragon growl. The Mighty Moose that, Thranduil rode was played by a horse named Moose. 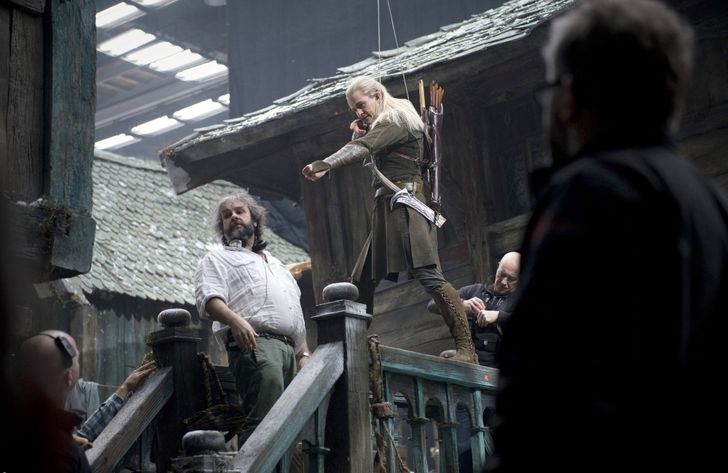 The cast of the film “The Hobbit” was huge. 800 elven ears, 752 wigs, 263 beards, and 800 weapons were made for the film “The Hobbit: The Desolation of Smaug”. All these things were then customized according to the requirements of each character. Richard Armitage, who played Thorin, was the only actor to grow his own beard for the character.

Luke Evans, Orlando Bloom and Peter Jackson relaxing on the sets of The Hobbit. 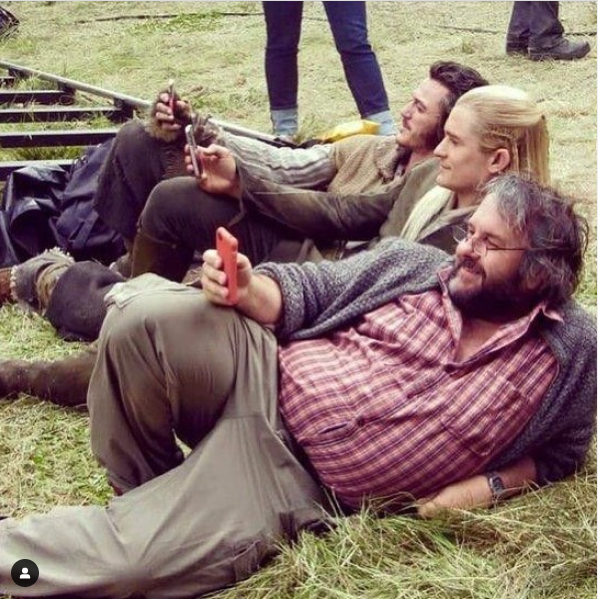 Do you know it took 2 hours for the makeup artist to create the look of the dwarf, Bombur, and 30 minutes for the young dwarf, Kili. 3-D printers were used to create props and accessories like helmets, fasteners, sword handles, dwarf legs, ears, false noses and prostheses that were used every day. 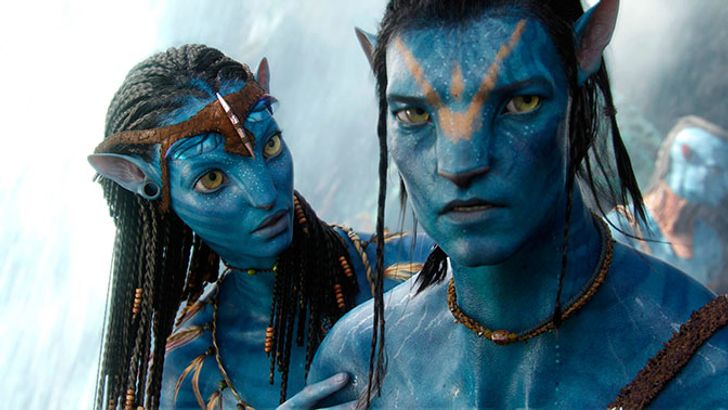 It took the team of graphic designers two years to create the appearances of the Na’Vi people. The blue color was chosen as their skin color because director’s mother once saw it in her dream.

Zoe Saldana, who played the character Neytiri in Avatar says “When I saw my blue copy, it just blew my mind. I couldn’t find words to express how I felt. It was something so wonderful and so beautiful, and it looked so much like me.” 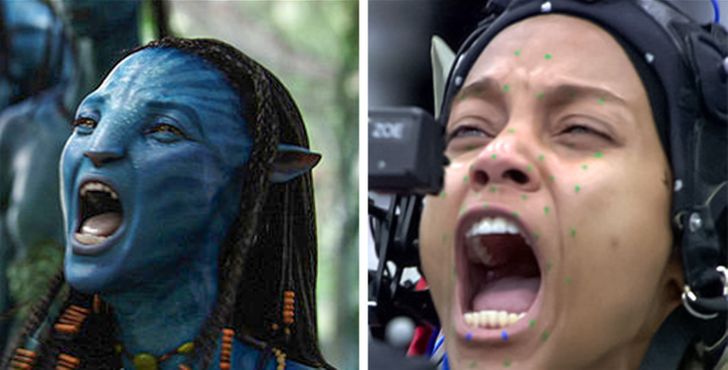 After the cast was finalized, James Cameron took the whole cast to Hawaii so everyone could experience living in jungles and start rehearsing their roles in real settings. Actors learned skills like archery, horse riding, shooting. Most importantly they learned Na’Vi language. 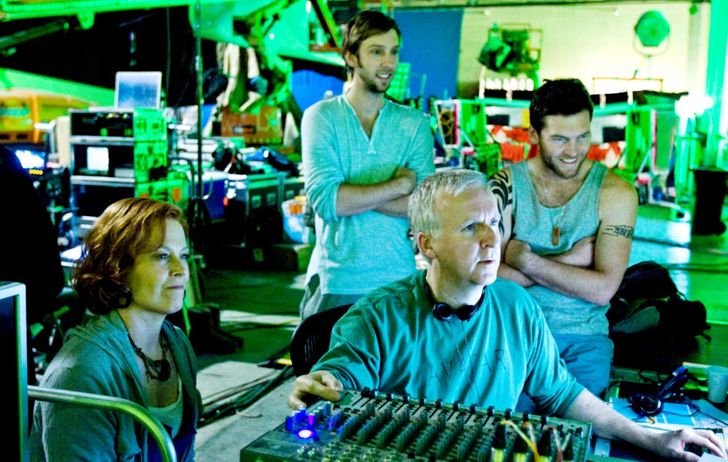 Designers took inspiration from real-life objects for creating landscapes and sceneries for the film. The flying mountains were inspired by limestone formations in China. The resource-mining colony was based on an oil platform in the Gulf of Mexico. 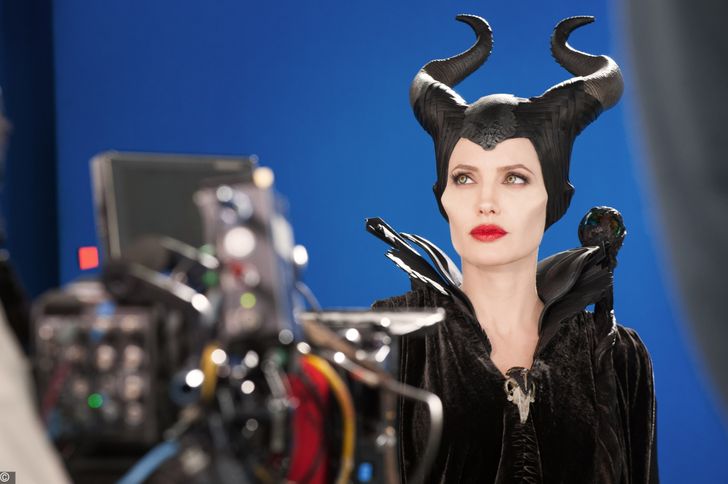 Angelina Jolie was the only contender for the role of Maleficent. It took 3 hours daily to apply make-up and carrying the costume was not easy, the actress revealed.

Initially, forehead and chin prostheses were used for Angelina but the overall look turned out to be a joke so they decided to use make-up only.

Angelina Jolie with her daughter on the sets of Maleficent. 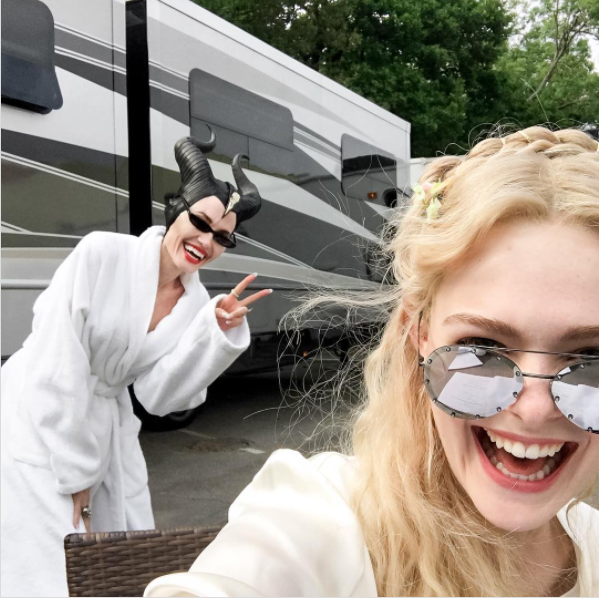 The Maleficent actress demanded her ears should look more pointy, the nose should be thicker and create higher cheekbones with latex and liquid glue for the character. Actress commented, “I’m playing a creature, so I should be a creature, not a beauty.” Actress spent 70 days in this make-up look. She wore this whole look for about 16 hours each day. 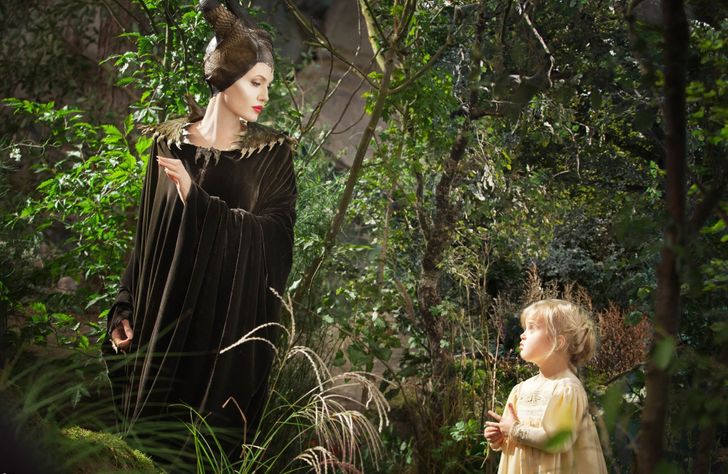 The voice for Angelina’s character in the film was discovered by accident. Actress shared “I was telling my kids stories, trying different voices on them. And one night they were like, ‘That’s a weird voice, mom. Why are you doing that?’ But then they made me do it over and over again. That’s how I discovered Malificent’s voice because I thought, it had to be a mysterious voice that is just fun to listen to.” 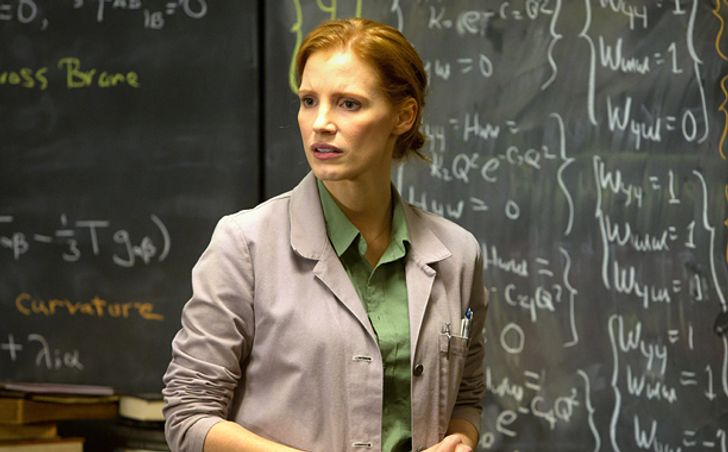 Initially, Steven Spielberg was the director of the movie. He chose Jonathan Nolan to write the screenplay and then he left the film. Jonathan recommended his brother Christopher to direct the film.

Do you know the character Murph was supposed to be a boy in the original script as the moviemakers wanted to show a father-son relationship? When director’s wife gave birth to a daughter, he came up with the idea of showing a father-daughter relationship in the film.  Jessica Chastain, who played Murph, shared, “He was able to use his personal experience of having a daughter to say, ‘Wait a minute, what about the father/daughter relationship?’ We’re not actually that different, men and women. We’re all complicated, we all have similar dreams and ambitions and fears.”

The film Interstellar was shot with one camera. It was director’s desire. 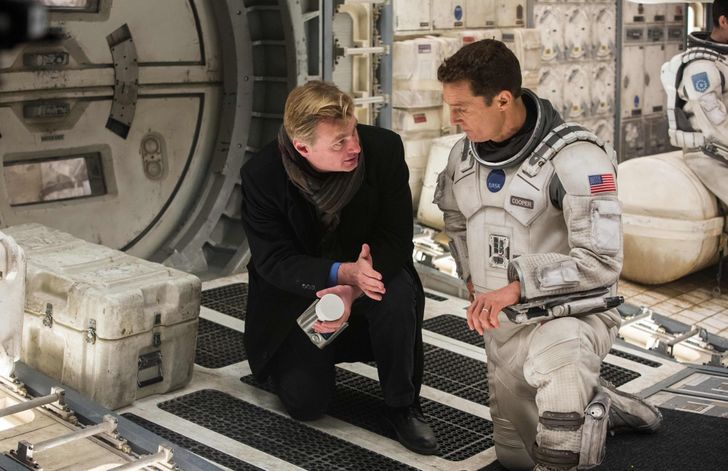 One handheld IMAX camera was used to shoot a scene from one angle multiple times then the angle was changed and shot again.

All the actions and adventures seen in the film were not photoshopped. The director was not a fan of special effects so they tried to create everything without any effects. All the scenes were created with the help of a theoretical physicist, Kip Thorne who was very kind to the actors. Kip Thorne is one of the world’s leading experts on the general theory of relativity. The programmers created a new software with the help of which they transformed the scientific equations into a realistic video of a wormhole and a black hole. So, whatever we saw in the movie was not fantasy but scientific concepts.

The robot, TARS was not created using special effects. It was real and was controlled by Bill Irwin. 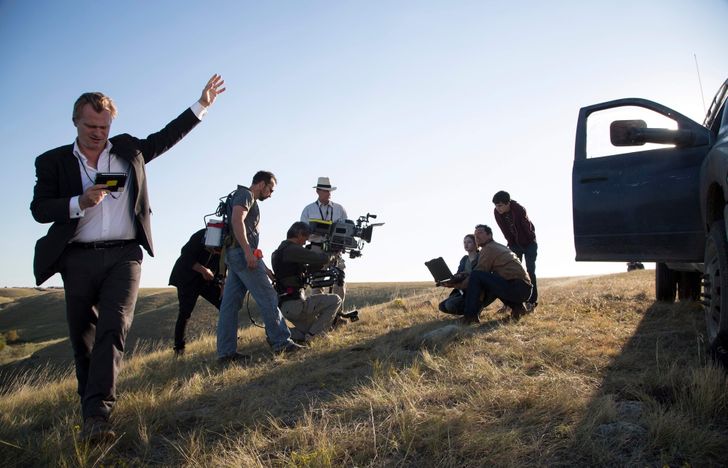 Cooper’s famous crying scene was the first take of the scene used in the film because director wanted it to be raw and human. 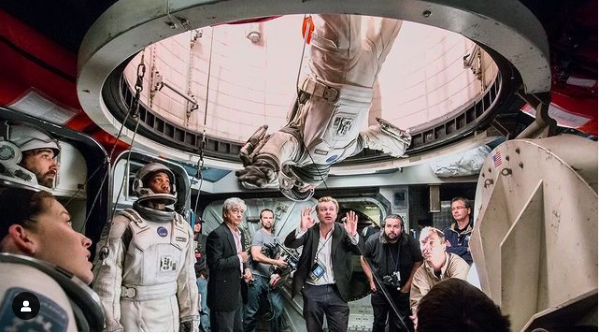 See how the magic was created in the movie “Fantastic Beasts and Where to Find Them”.

Which of these movies is your favorite? Hope you enjoyed it! Comment down to share your thoughts!