We have all grown up realizing that a man cannot survive a bear fight especially after being ripped apart, humans don’t possess the ability to fly or shoot bombs out of their hands, and animals cannot talk. However, history speaks otherwise. We have seen Wonder Woman fly through the air, Iron Man shoot blasters through a high-tech suit he made, Chris Pratt pet a Raptor in Jurassic Park, and Leonardo DiCaprio survive a bear attack in Revenant. And all of this is owed to what we refer to as movie magic. Every single mind-blowing scene you can think of, which in reality may seem very unrealistic, its success is owed to the visual effects team and their understanding of the idea provided by the directors. You cannot say it is a one-team effort. The reason why Avengers: Endgame gave us visual orgasms was the beautiful coordination between every department working on the movie. A great visual effect is no good if it’s not in line with the script, or according to how the directors want it to look.

And then its key connections that directors, by going an extra mile, use to enhance the scope of the movies. These key relations are not let out while filming or after the release but curious eyes manage to pick out everything and hence why we now know quite a few on-set secrets that probably were never supposed to come out.

And then there are also times when the best moviemakers make errors and try their best to hide them under covers. A movie holds a lot more than the directors want you to know.

So, it is pretty safe to say, a visually appealing movie takes a lot of effort and the moviemakers work really hard to swiftly hide all the on-set secrets and turn them into masterpieces.

Today we will be looking at some examples of movie magic. Scroll down below to enjoy!

1. Don and Ron Taylor are two policemen who worked as security guards on the set of The Truman Show. Director Peter Weir found their chemistry to be so good and attractive that he decided to hire them. They became the funny twins you saw on the show. 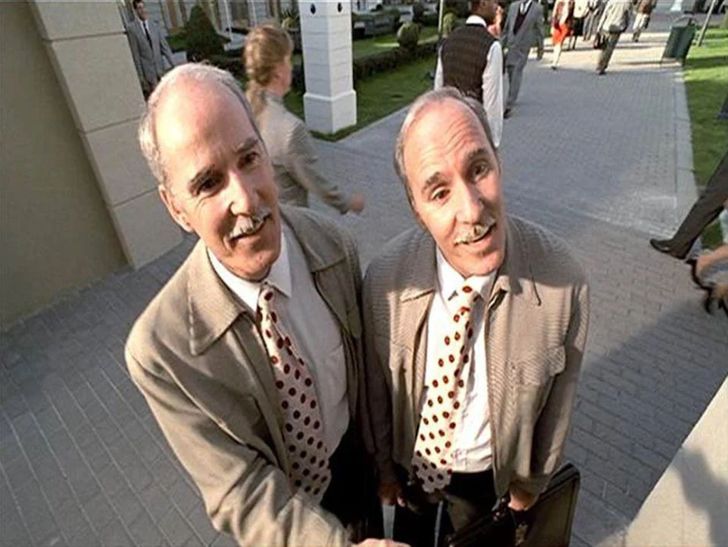 Via The Truman Show / Paramount Pictures

2. Gal Gadot filmed almost all of her fight scenes in a blue room, gripped by a harness. The visual effects team later turned those bland shots into masterpieces. They even made her hair look different. 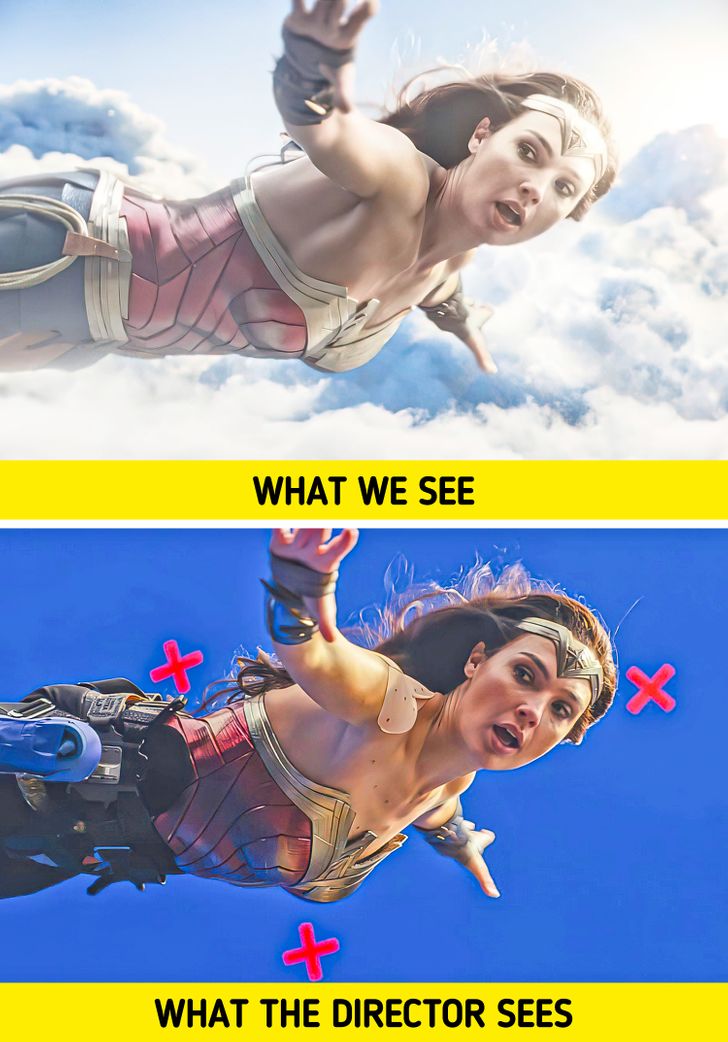 3. In one of the scenes from the movie The Nice Guy, we are shown a new character named Fat Andy. The role was played by an actual Detective Louis Esposito. But years after the movie’s release, Louis Esposito was put into jail because under the cover of a NY detective, he was actually working with a mafia group. 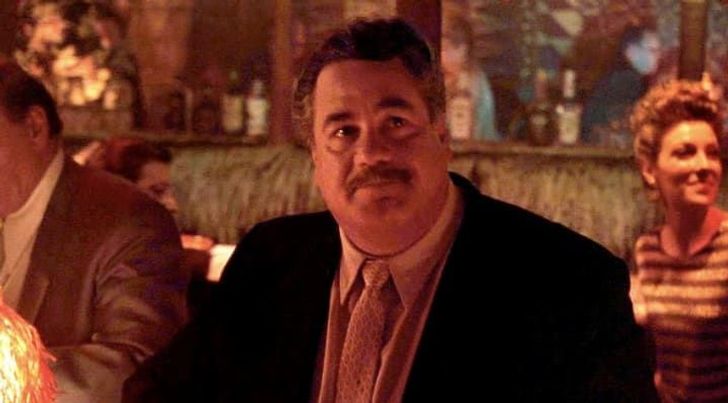 4. In the credits of the movie The Naked Gun, the cast is credited for the dialogues they delivered instead of the characters they played. According to the director, this made people stick till the end of the credits and also made it easy to remember who was who. 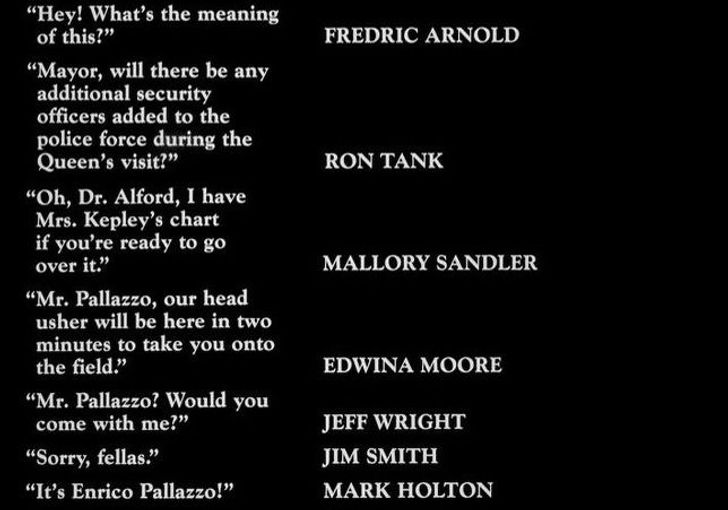 Via The Naked Gun / Paramount Pictures

5. In the movie Saving Mr. Banks, Tom Hanks was seen wearing a tie that Walt Disney used to wear. The tie has a strange symbol on it that looks exactly like the one used by “Smoke Tree Ranch”. This is a real place where Walt used to go spend his vacations. 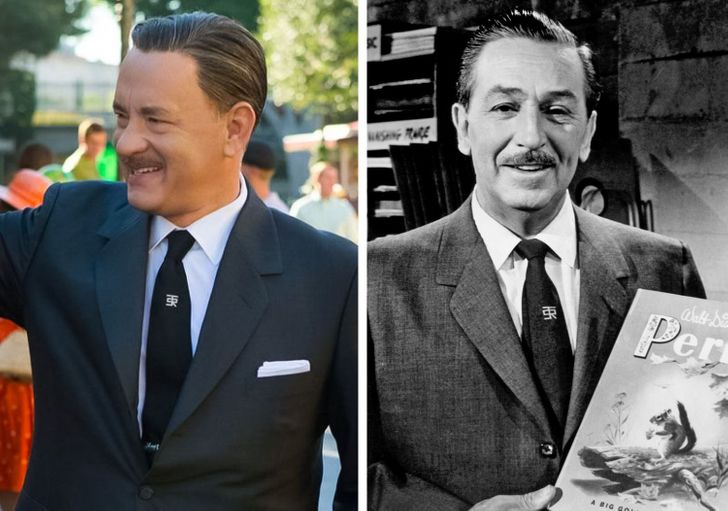 6. A very rare fact about Director Garry Marshall is that he always hires the same actors for all his movies. Even for the little roles. 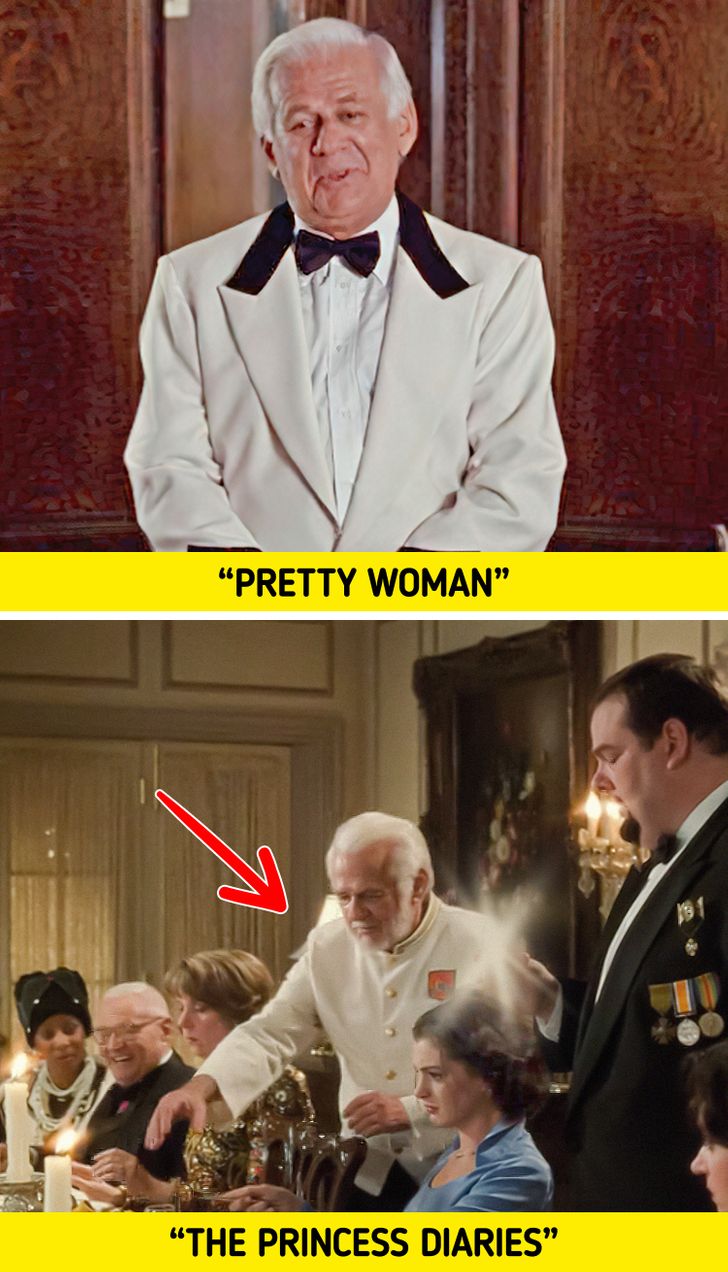 A curious eye always manages to catch something. Would certainly like them for spotting these on-set secrets. You have to give it to the directors though, they have outdone themselves at hiding these secrets. If it weren’t for the Sherlocks, most of us reading through this post today would’ve never known about these events.

7. The cult dance Joaquin performs in the bathroom, in the movie Joker, was not in the script. The actor improvised the act on the spot and it ended up being one of the most loved scenes from the movie. 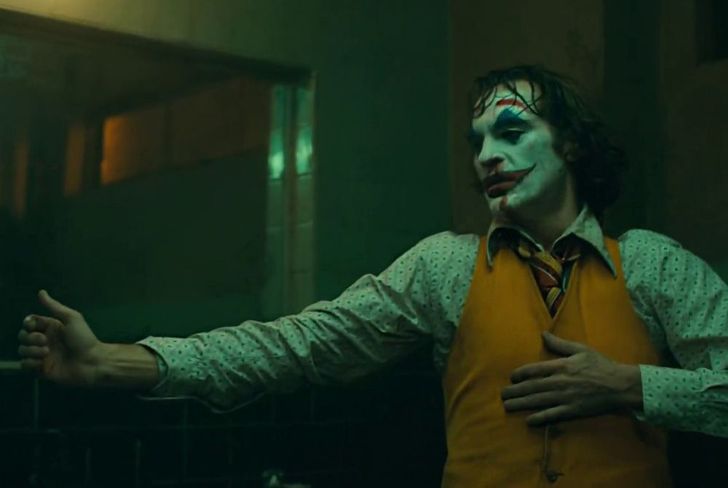 8. Remember this portrait from the movie Knives Out? By the end of the movie, the old man can be seen smirking a bit more than he did when the portrait was first seen at the beginning. 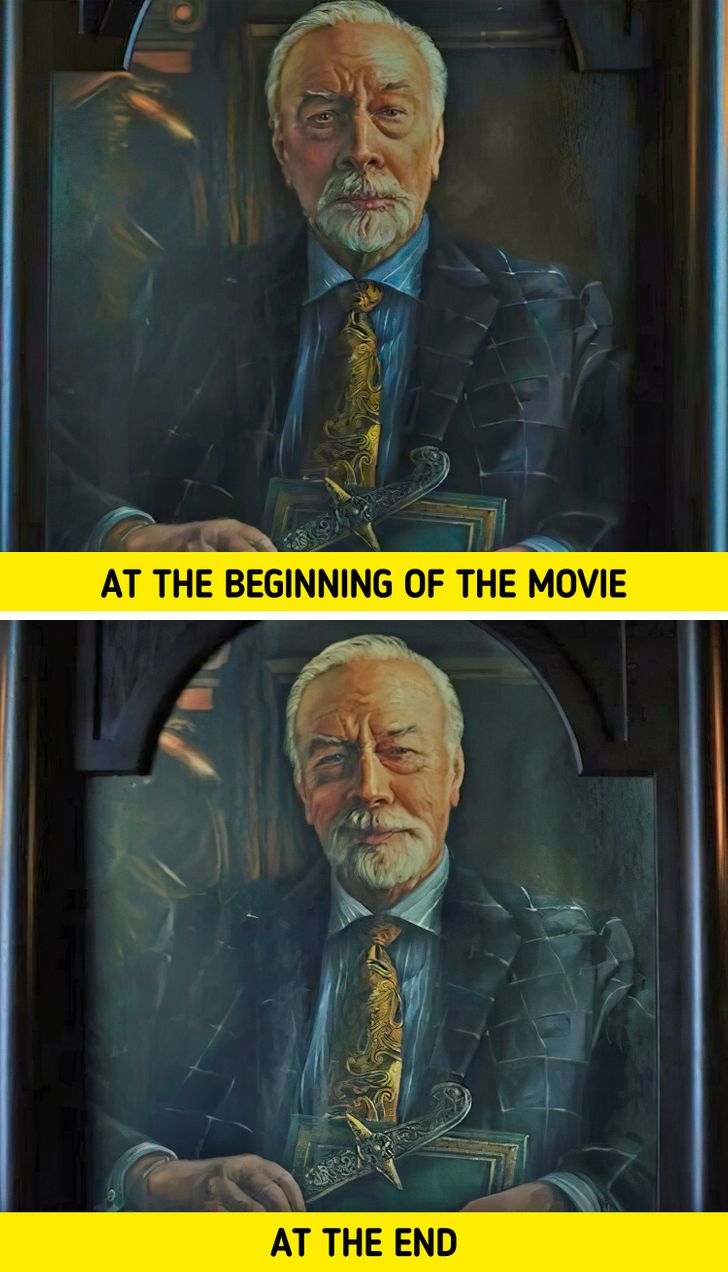 9. This is what the massive wolf from the movie The Twilight Saga: Eclipse actually looked like on set. Movie magic is insane. 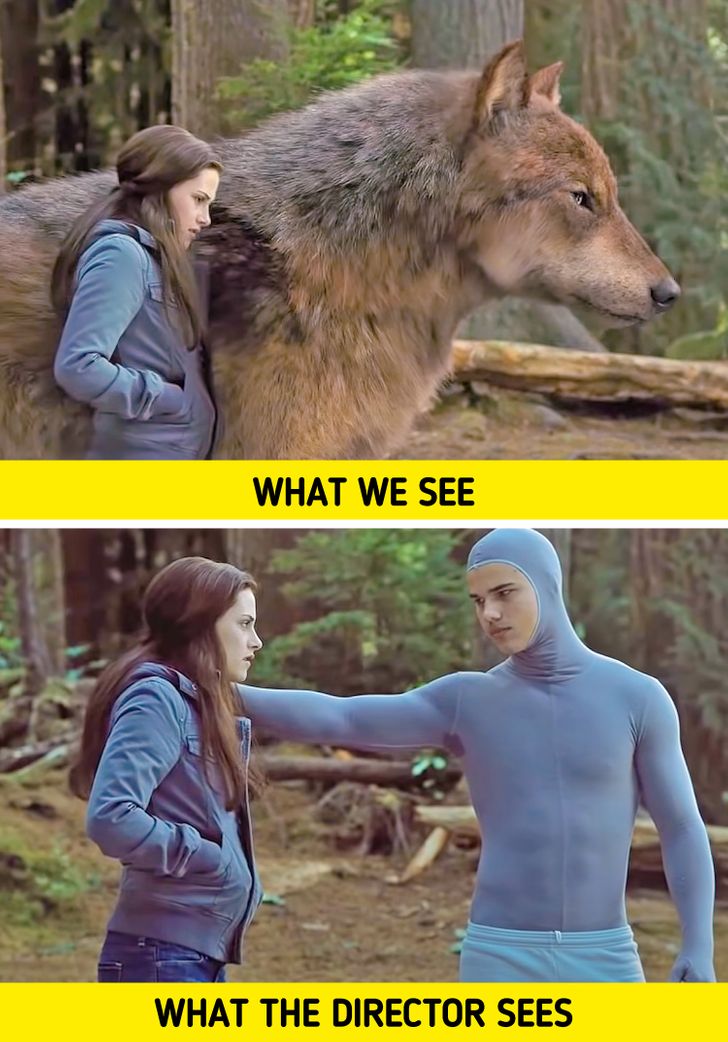 10. The man we see playing the piano in this scene from The Truman Show is actually the music composer of the movie. 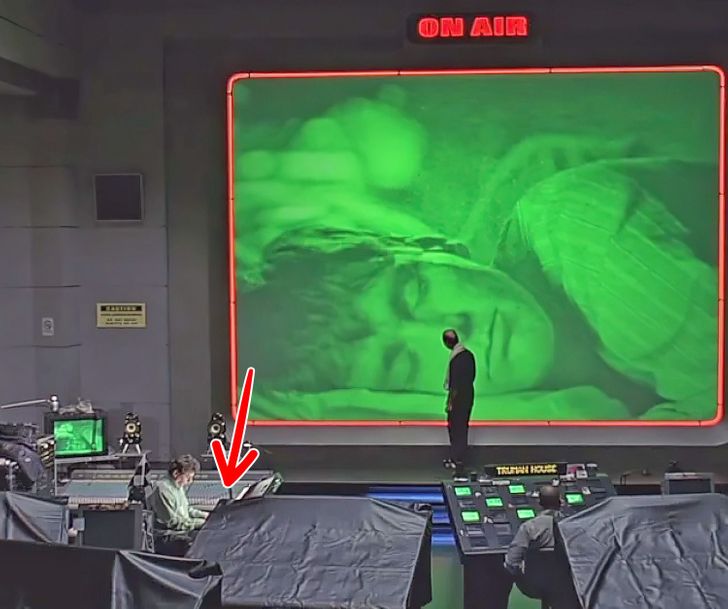 Via The Truman Show / Paramount Pictures

11. Remember those gorgeous horse riding scenes in the movie Mulan? Well, the horse wasn’t actually there, to begin with. It was just Mulan’s great imagination and the visual effects team’s amazing work. 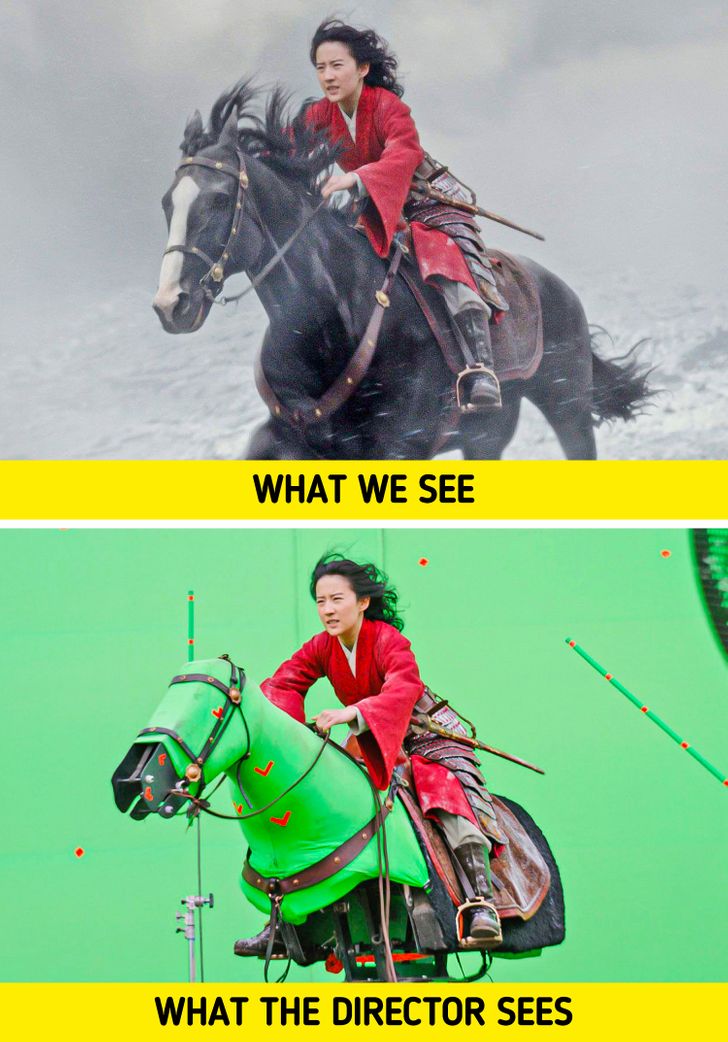 12. For the movie Red Notice, the moviemakers got a super cool sportscar for Dwayne Johnson to drive in one of the scenes. Owing to the actor’s massive muscles, he never managed to fit in the car. The directors had to use movie magic to execute that scene. 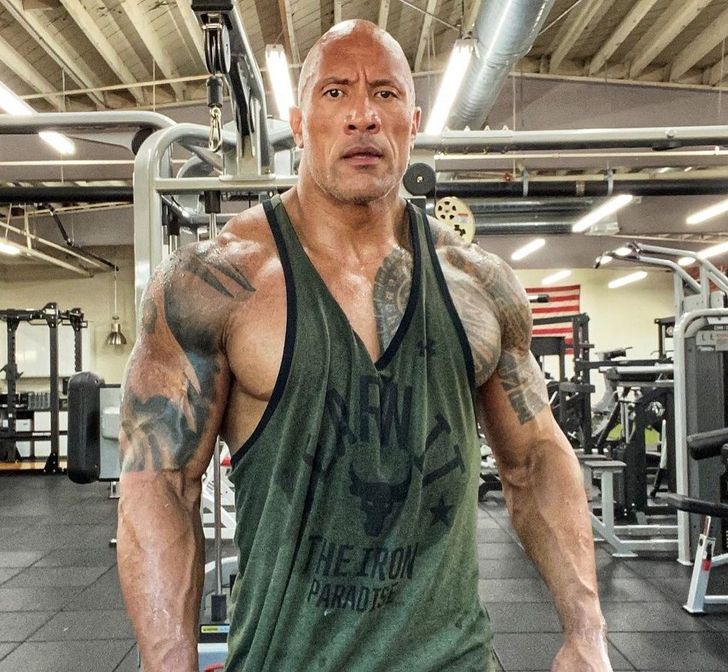 I really hope you guys enjoyed this one. Don’t forget to share your thoughts in the comments section down below. Have you guys ever managed to crack open secrets moviemakers tried to hide?