Sexism hasn’t yet been eradicated.

Sometimes it feels like we are back in the ’70s where women have to ask everything from their husbands or father before they can actually do it. This may seem like an exaggeration but as a woman, I can say honestly that if I had a quarter for when I have had to deal with ‘casual misogyny’, I’d be a millionaire. From salespeople not taking women seriously to assuming things when they can easily just ask, there are a lot of things that need fixing.

I am well aware that some people like to preach about how we have taken huge steps as a society and that there is no need for feminism anymore. But every country is different and there are so many women in this world who go through much worse things than what has been mentioned here. However, today we are going to keep it light with people simply asking to speak to a women’s husband or father when in actuality the women in the client.

Not only are they losing customers by acting this way but they are revealed to be dumb misogynists as well.

#1 All we need is a lipstick holder in our cars and we are set.

#2 It isn’t as if it is our body they are talking about.

#3 What does gender have anything to do with how well a person can do their job? 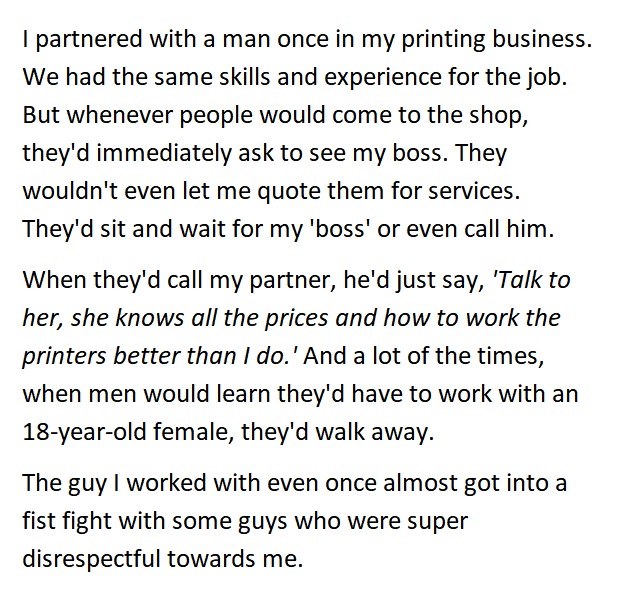 #4 I thought the stereotype was that women study more? 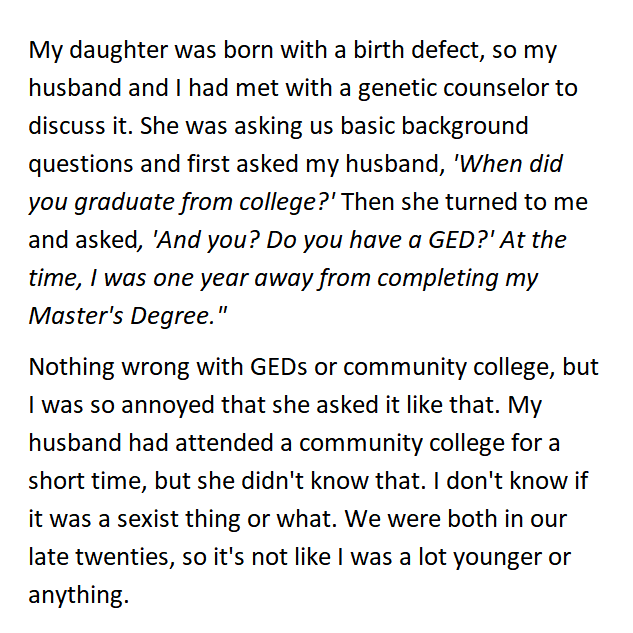 #5 Women aren’t safe from sexism in any regard of their life. 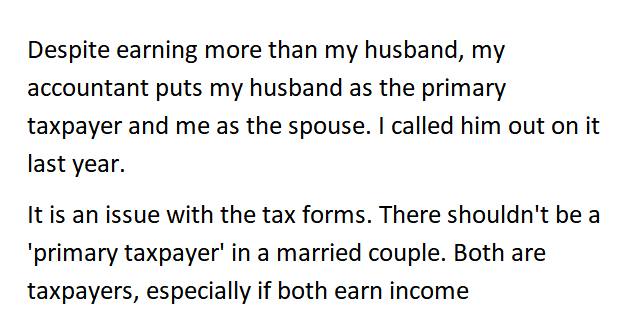 #6 Whether she does or doesn’t talk to her partner should not be their concern. 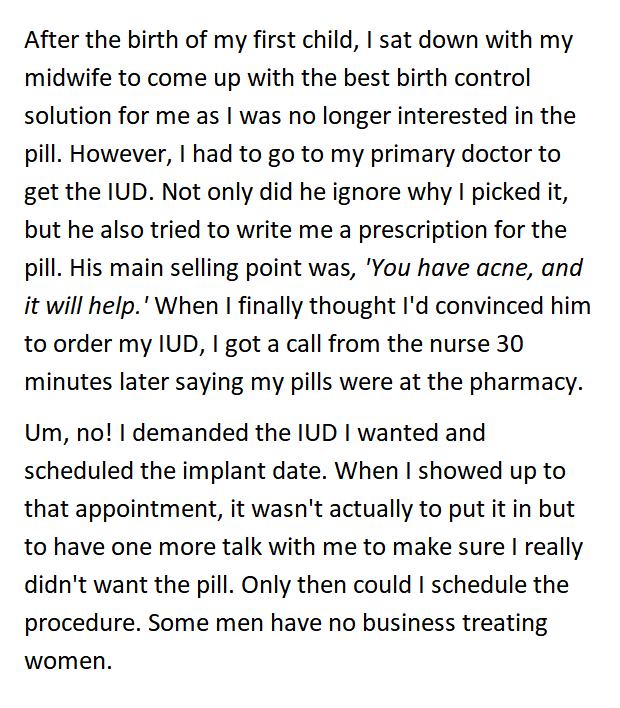 #7 Why do people just assume you are married or have a significant other? 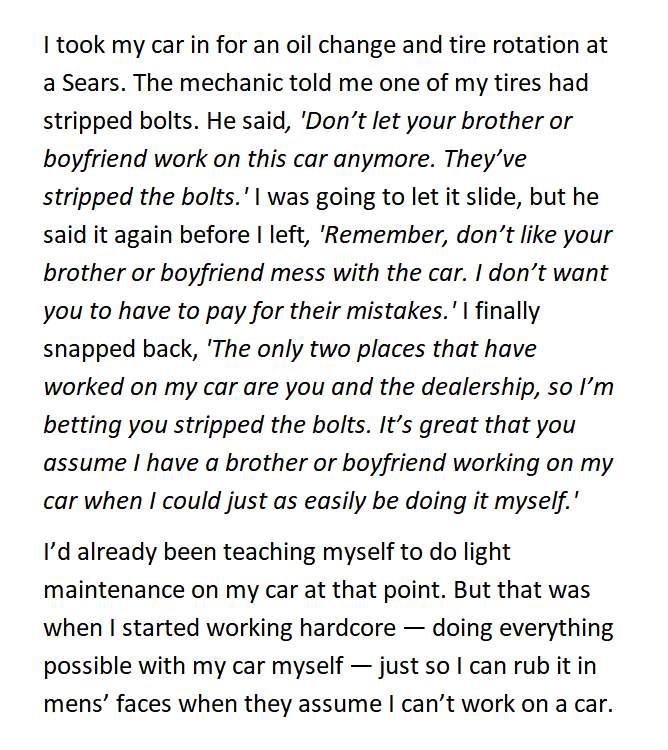 #8 And appearances have something to do with what job you do? 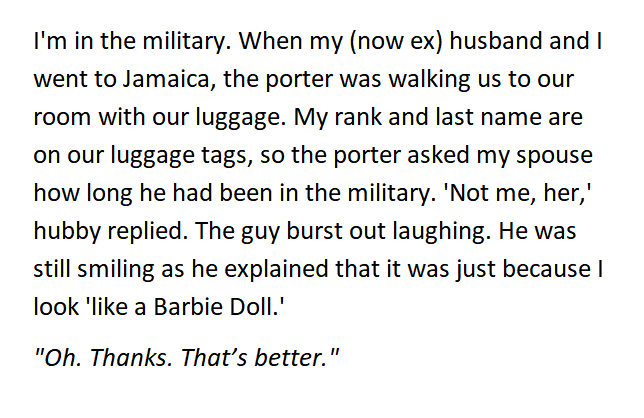 #9 This isn’t how you treat a patient. 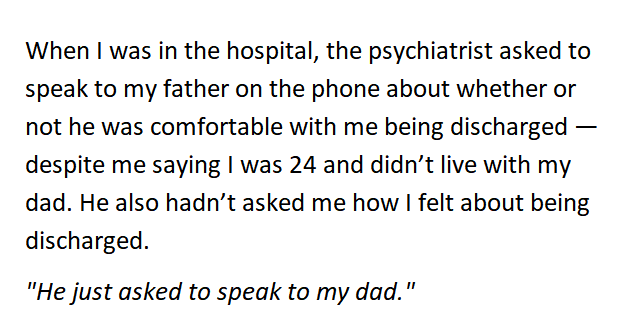 #10 Mansplaining at its finest. 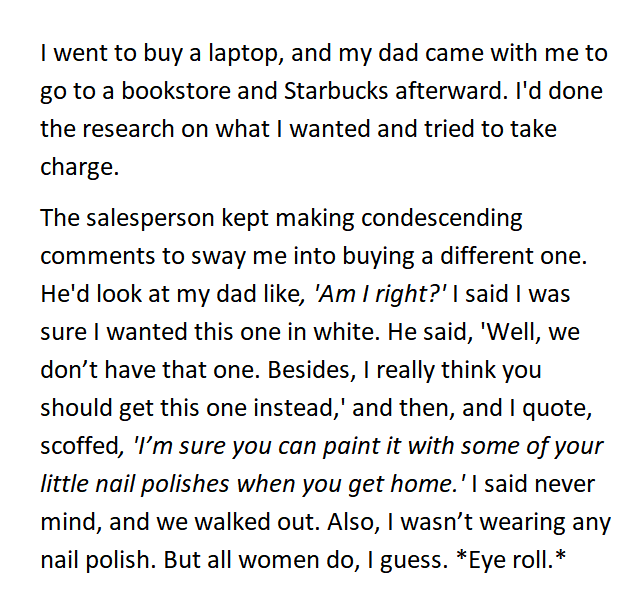 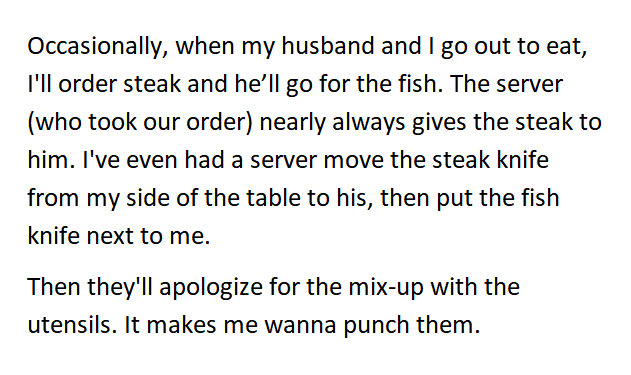 #12 I have never heard of something like this and I hope I never have to deal with it. 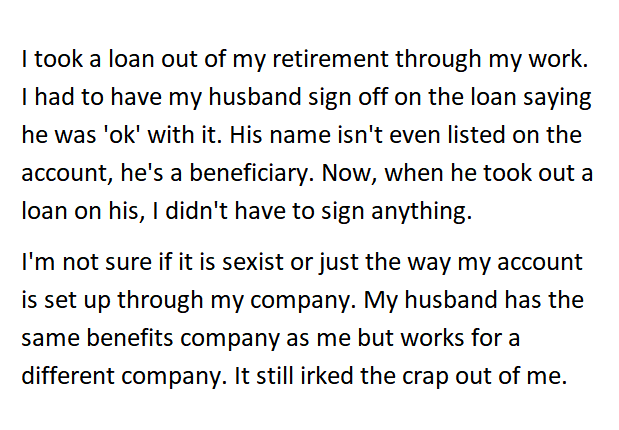 #13 I thought women were supposed to remain in the kitchen? 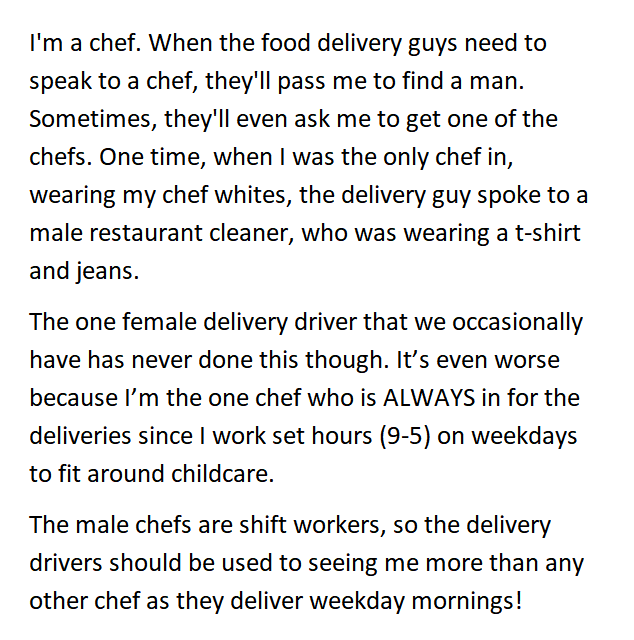 #14 Why not just do your job quietly in the first place? 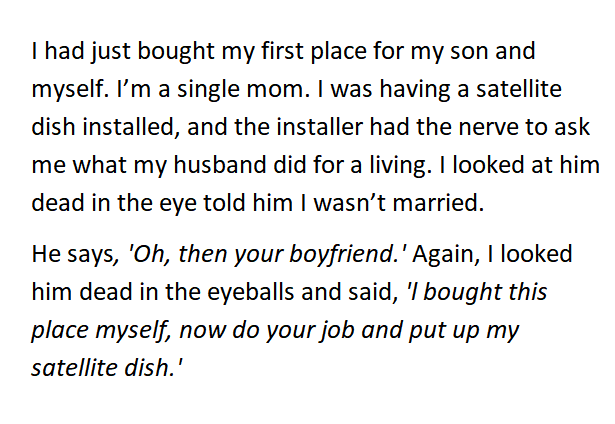 #15 Pain was not as important as her husband not being able to get what he ‘deserved’.

#16 Women simply don’t know anything about history even when it is their job. 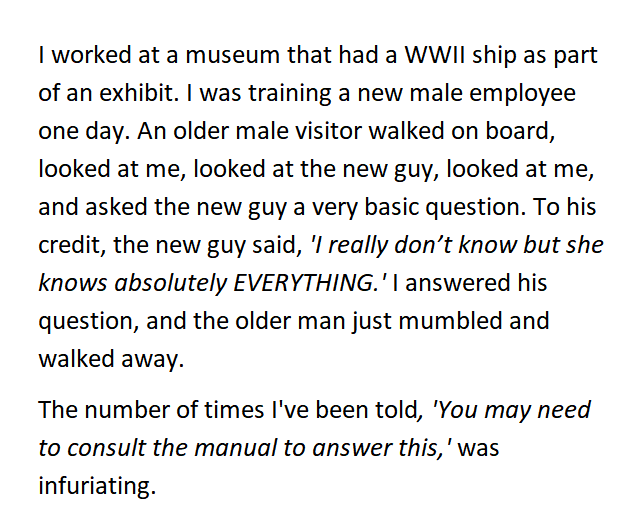 #17 People just tend to talk to a male if one is present and I don’t understand why. 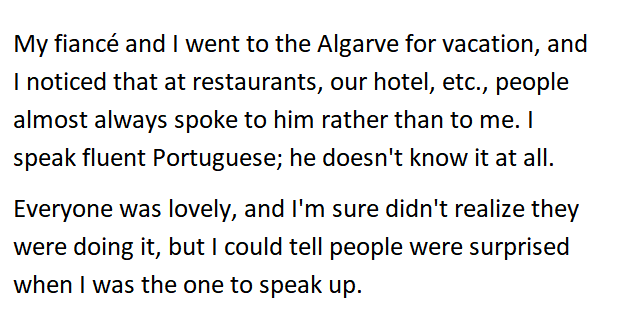 #18 I am sure many people have dealt with this. 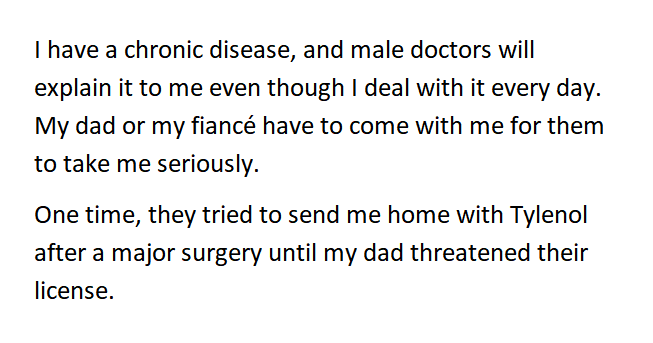 #19 the same things happen when a woman walks into a computer store.

#20 Women obviously don’t know anything about tools unless they are pink with ruffles on them. 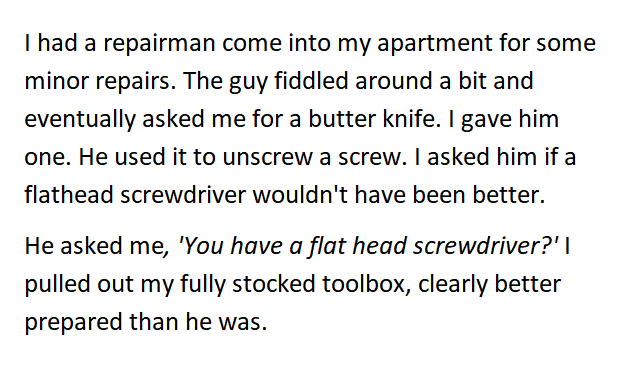 #21 Isn’t she aware that women only drink wines? 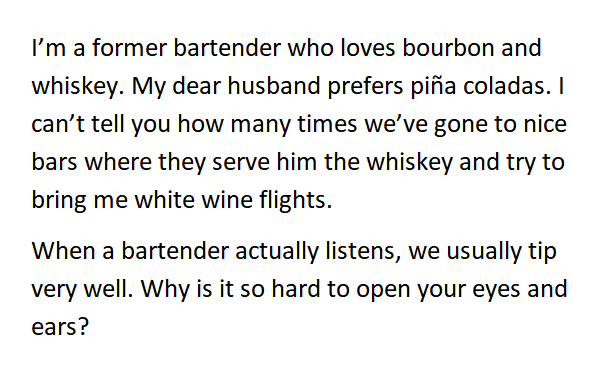 When I was a waitress I never assumed what someone was eating or drinking based on their gender. It’s not only annoying for women but for men too. Sometimes a guy wants a cosmopolitan and a salad! Let him live! -rc

#22 This is just straight-up rude and insulting. 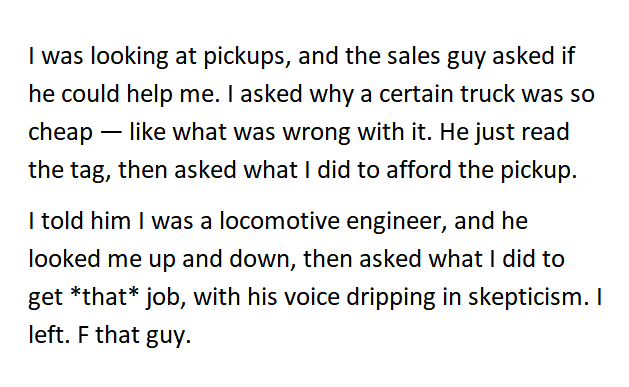 #23 Treat everyone with respect regardless of their gender. 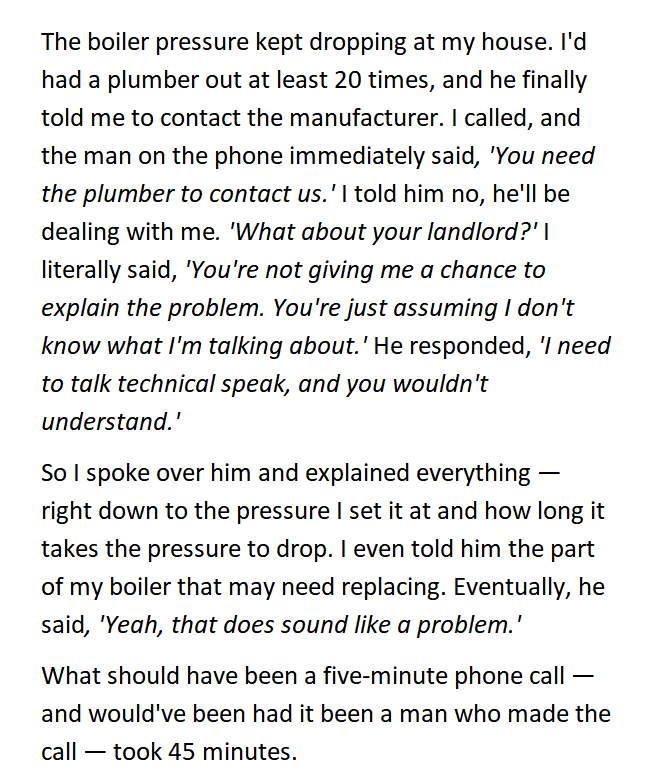 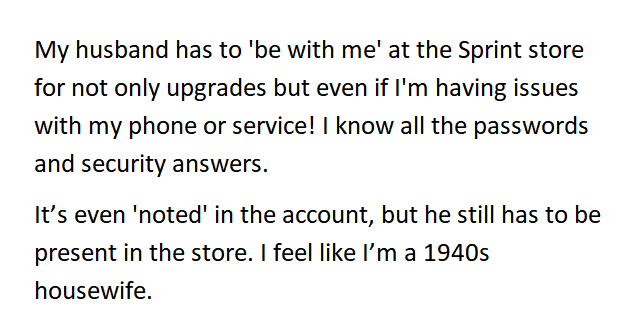 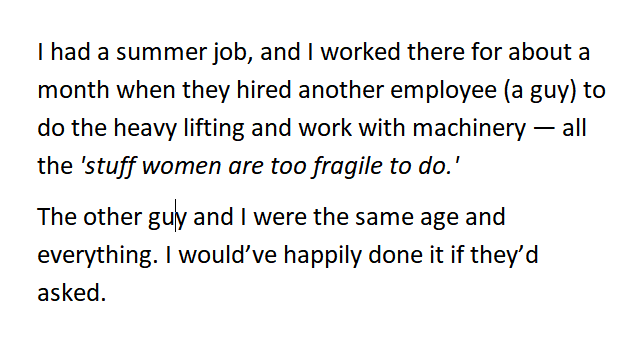 #26 This would have turned out completely different if he had not been so sexist. 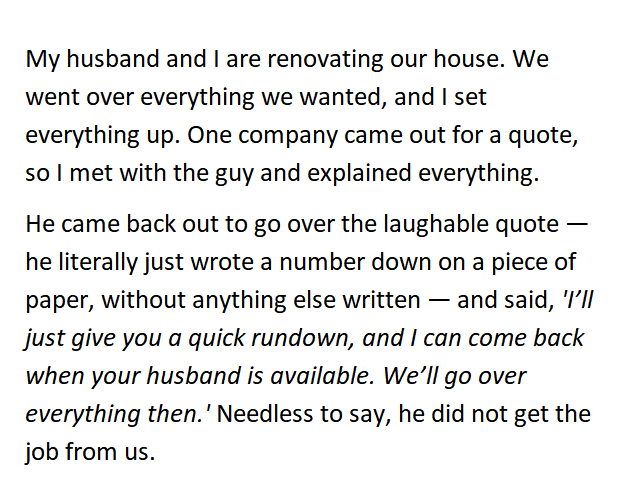 #27 Hopefully this means we are moving in the right direction. 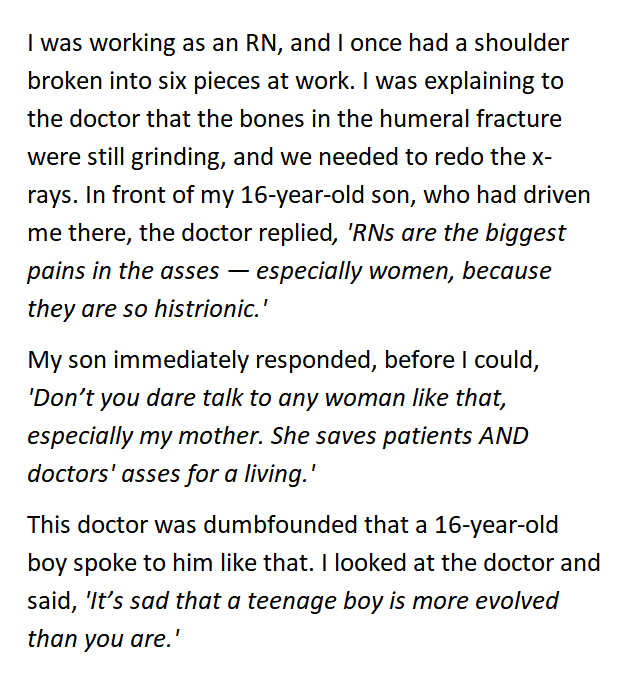 #28 Most women can relate to this. 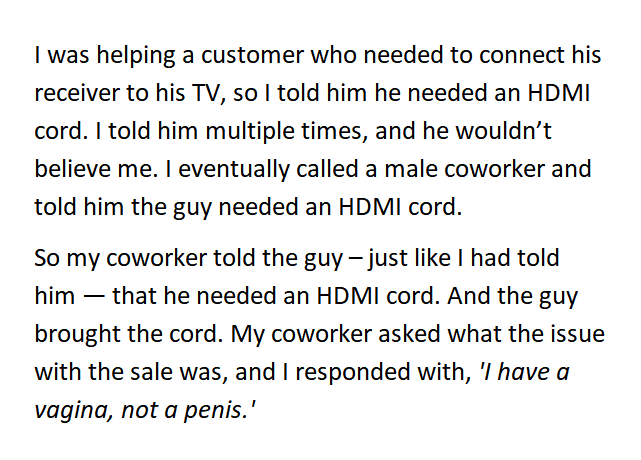 So I started a new position running inventory at my job. That includes accepting deliveries, unloading trucks, etc. I’m 5’10 and very strong. I JUST started February 1st and at least once or twice a week, I get delivery men asking “do you have any men to help you unload?” or they’d ask what happened to the old inventory guy and they’d say “and they hired a woman to do grunt work?” I also get called “little lady” a lot. MIND YOU, these men calling me “little lady” are all shorter than me.

And then when I show them I can unload, they watch me like I’m some kind of sideshow freak to see if I’ll mess up, instead of helping me. I love my job except for those deliveries. -funk

Do you have any similar stories you want to share with us? If so let us know in the comments below.