Sometimes a little warning is necessary.

We all know how evil our cats can be as explored by several people, of which one example is right here. As we have previously mentioned time and time again, cats will do anything to get their way. Some will even go as far as fake being hurt or injured just so they can be coddled by their owner. However, these kitties took it a step further, and this leads to their humans having to warn others of their shenanigans.

Everyone likes food but these cats apparently act like they are homeless and haven’t been fed for a year just so they can have a second breakfast. They won’t stop doing it even if they keep getting sick from overindulging. And for many of us, it is impossible to say no when they purr around us asking for head scritches. They really have mastered the art of deception. And you can see that for yourself by scrolling below.

#1 I sure hope they got treats before the police were called.

#2 No one would suspect the demon underneath by the looks of it.

#3 That is one sneaky cat and thankfully her paw has never been hurt.

#4 I wonder why cats love to make a mess. 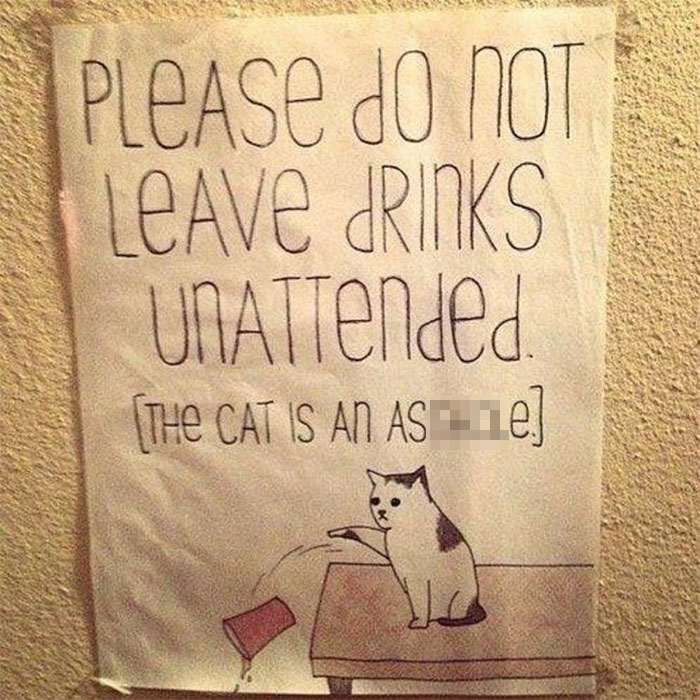 #6 Her glare can move mountains.

#7 She doesn’t like people knowing about her true nature. 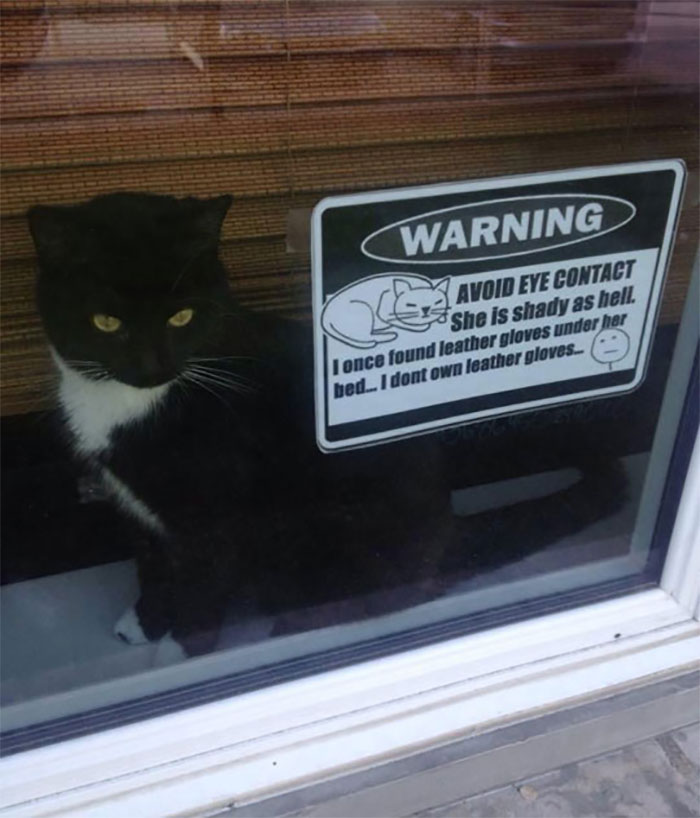 #8 He apparently does this for sympathy points.

#9 The sign says that he is the boss and not there for customers to pet.

#10 They have realized the cat has adopted the doctor.

#11 The mugshot tells us everything we need to know.

#12 How can someone with that face be a freeloader? 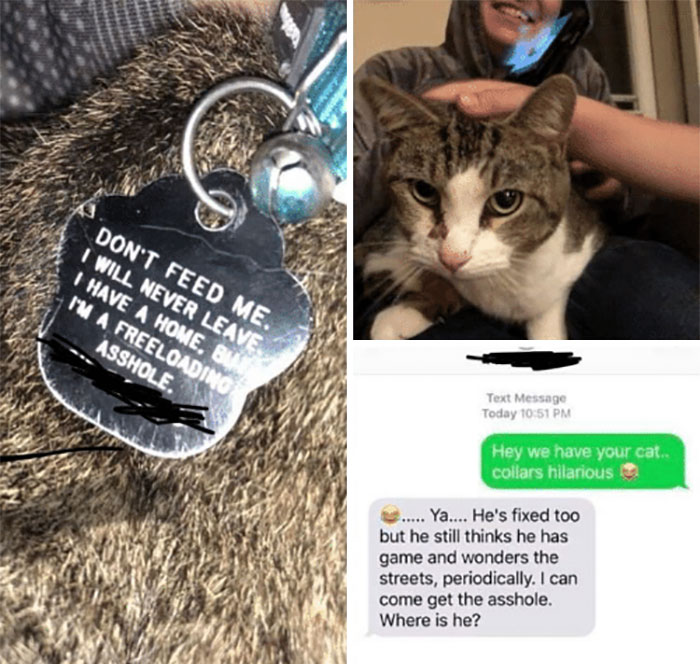 #13 This one just pretends to be lost. 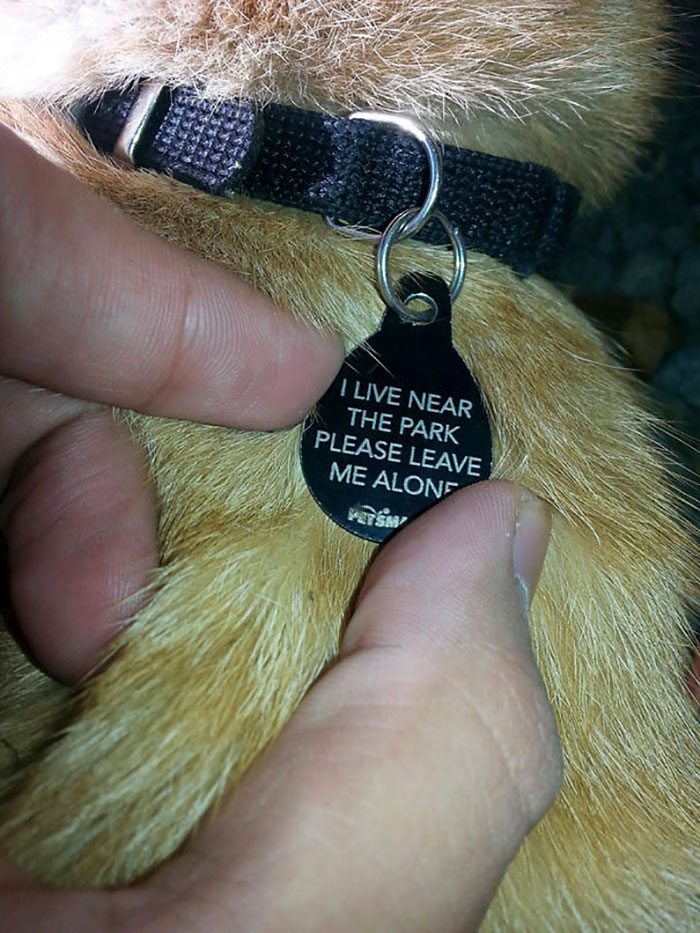 #14 And the door dasher is always ready. 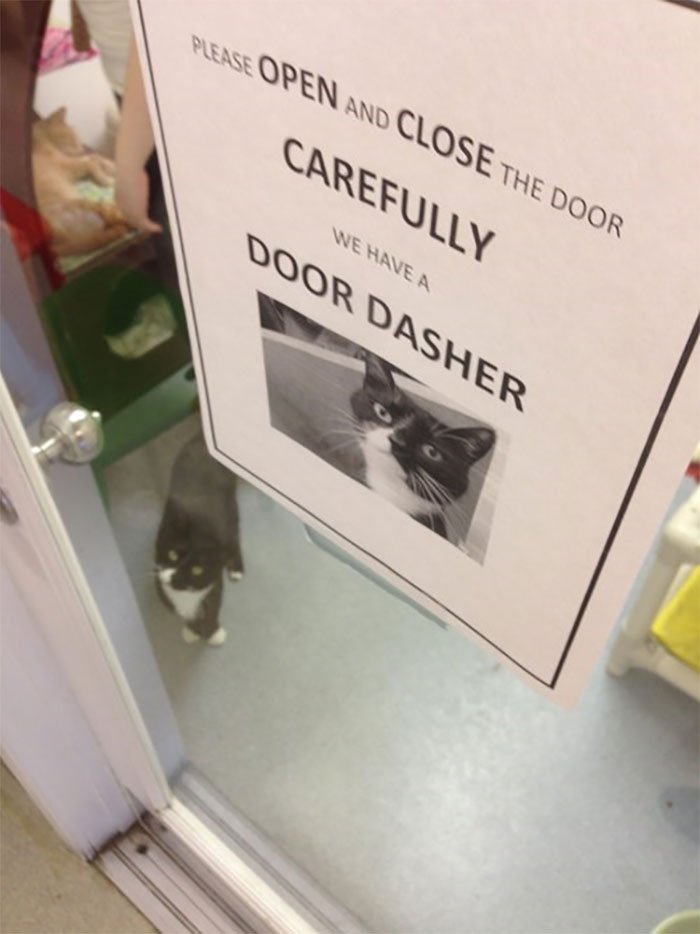 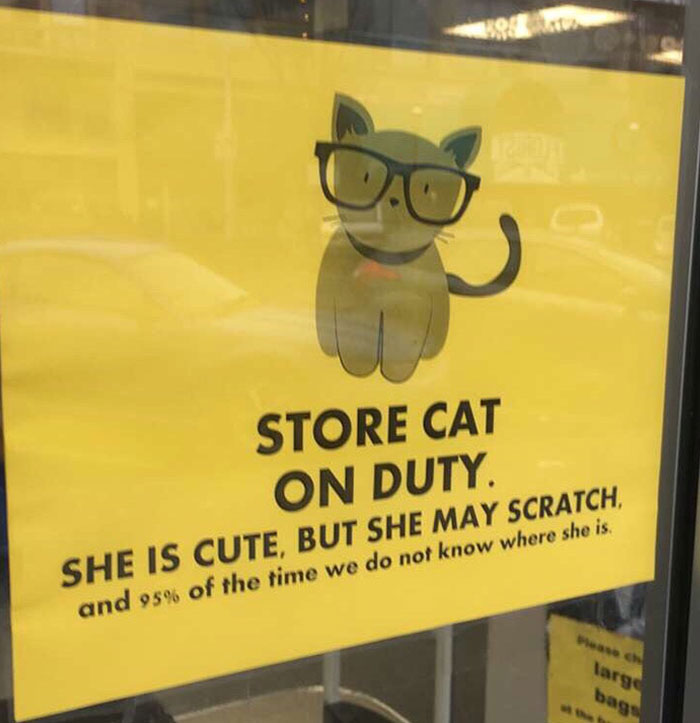 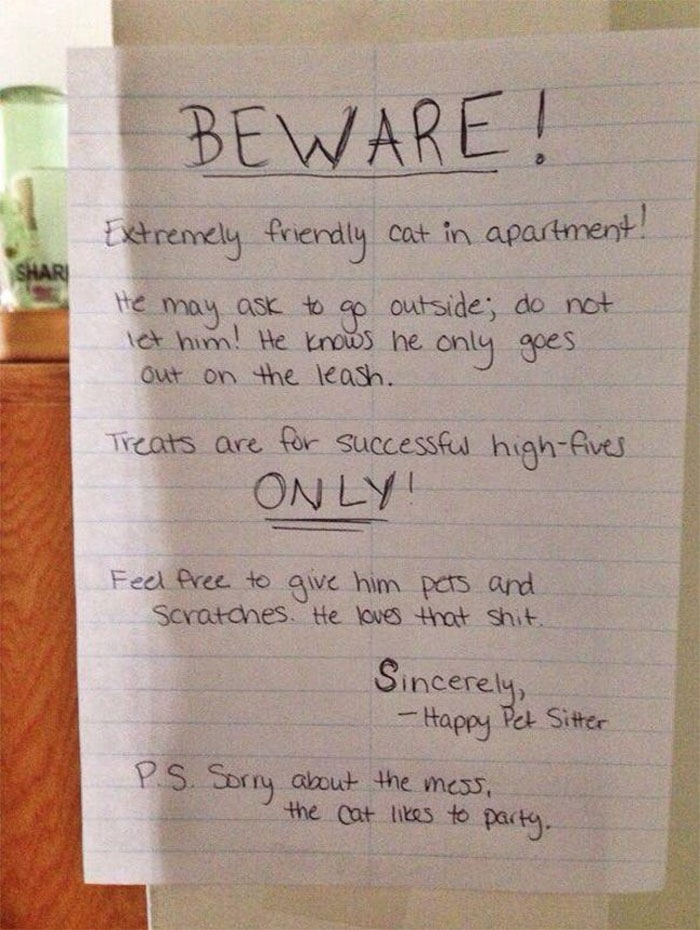 The reason why cats will eat whatever food they can find and not stop is usually the same as humans. Do you know how we tend to overeat when we are bored or feeling lonely? Apparently the same goes for cats as well. So it is not that they want to worry you, they just don’t know how to express themselves.

So yes, they will eat even if they are not hungry, However, sometimes it may even indicate a health issue in which case a vet visit might be necessary.

#18 And yet they sit around the empty food bowls.

#19 Where is the moustache?

#20 He does look like he has a lot of stories to tell. 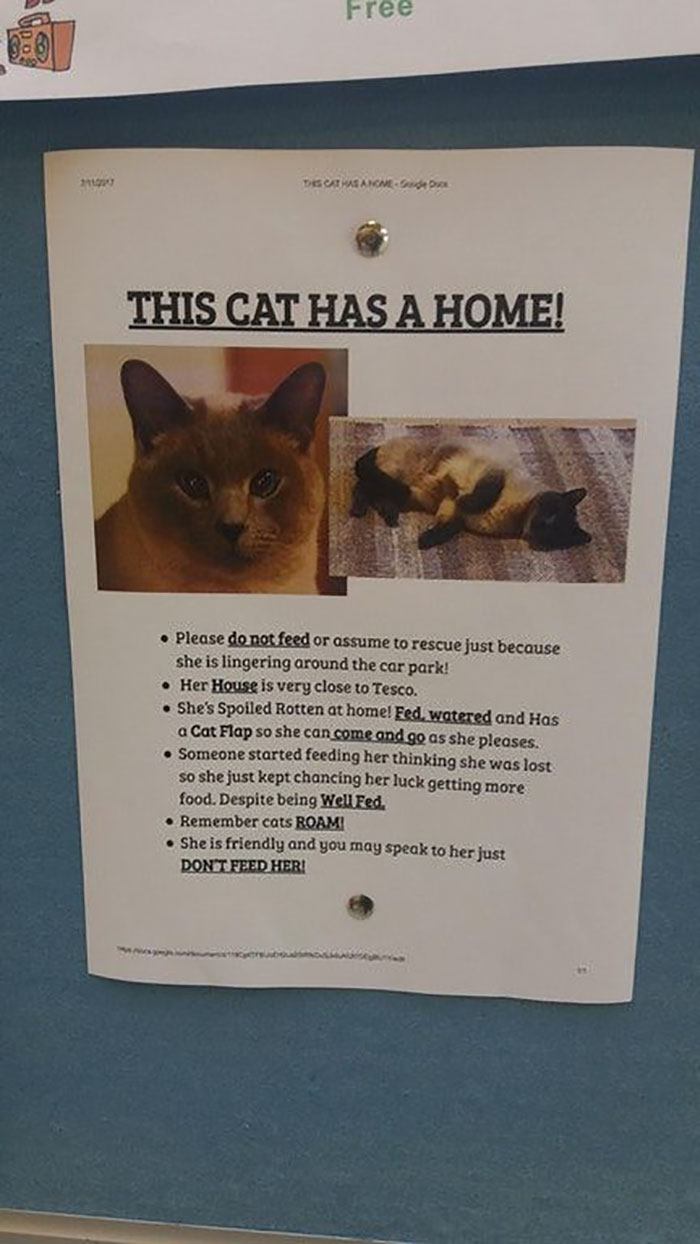 #24 I bet they only put this up after she pooped on the carpet. 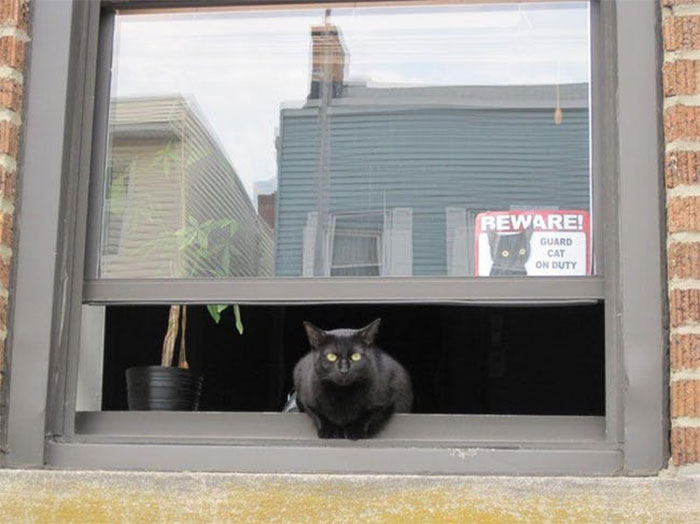 #27 Cats sure do love annoying their owners.

#28 An intruder that will melt your heart.

#29 Cats are just agents of chaos.

#30 At least she is friendly and healthy.

George just had his 17th Birthday! He has health issues and is on strong medication, but is doing well for his age. He meows a lot but is not hungry or lost – he just wants to greet people and have fuss (aka, be petted). Please do not feed him anything, if you are worried about him please talk to us (knock or leave a note at no 24).

#31 Nothing will stop him from his mission. 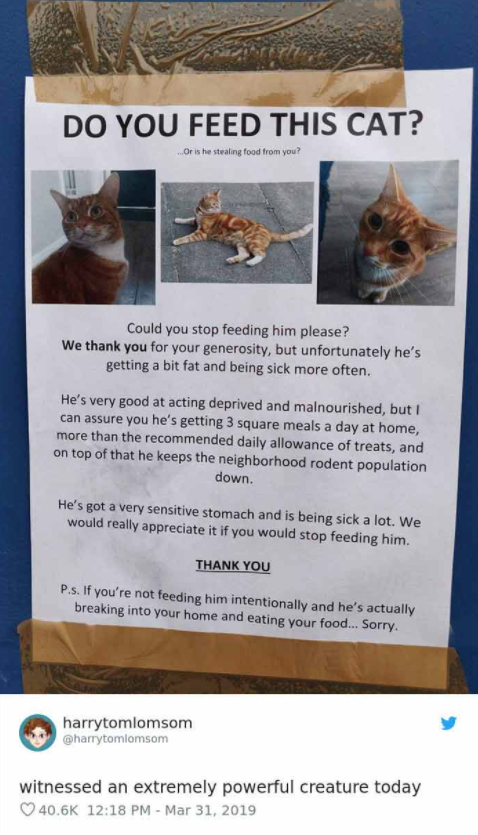 #32 This kitty is quite clever indeed.

#33 They are always looking for the right moment.

What are the clever tactics your cat employs to get attention or get a second helping of food when she is supposed to be on a diet? Comment down below and let us know.