Are you all set to get some shivers down your spine?

We do not pay as much attention to the things around us as we may think we do. There are so many things about the world that we are completely unaware of. We don’t know how serial killers function and what are some things that appeal more to them. There’s so much about the history that we have not learned yet and if we do, we would be filled with the urge to know more and hide in a blanket out of fear at the same time. There are numerous facts that we have never heard of and once we come to know about them, not only they will be intriguing but unsettling as well.
In our today’s agenda, we have managed to gather some of the creepiest facts that are bound to send shivers down your spine and creep you out! So, are we ready? Scroll down to find some very unsettling facts!
Via AskReddit

And that’s one brutal fact that we all did not have to know. Now every time I see grass being cut, It would feel like the grass is being butchered. That is not a nice thought.

Of course, no one even accurately knows how deep the ocean is. This is actually the most unsettling thing to know. We humans will probably never be able to discover the depth of the ocean. It is frightening to think about what might be at the bottom of the ocean.

This is actually the truth. So many people have died while climbing Mount Everest. Due to extremely cold weather, dead bodies do not decay and decompose at mount Everest. Anyone who visits the mountain gets to see all the bodies lying around. It is extremely terrifying and sends chills through your body.

4. Try to stay awake while the venom kills you!

Damn, and I thought life was hard. How long does it even take before the venom wears off? What if someone already has not slept properly the night before and is extremely sleepy? This incident would be complete hell. I hope no one has to go through this. It makes me want to never step out of the house ever again.

5. Your murderer is still alive

The fact that any of us could be victims of murder at any time is scary. And on top of that to know that your murderer would properly never get caught? I would probably wake up from my grave and haunt the murderer myself.

6. The chronicles of blobfish! 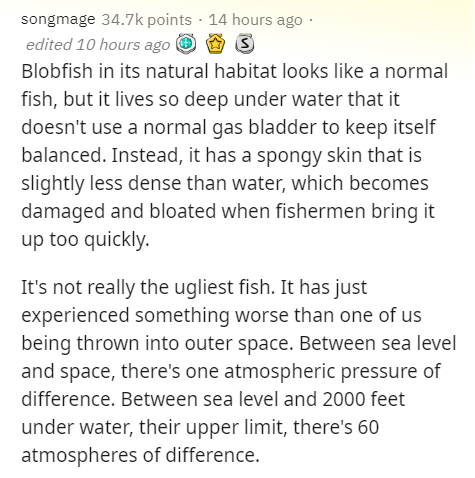 We all discuss how no one has ever seen the depth of the sea, but I guess we have found ourselves a winner, guys. Blobfish has probably seen the depth of the sea partially. To know that this creature is being taken out of its natural habitat just because some human beings are curious is unsettling. Only the blobfish knows the changes its body must have after constantly being in and out of the water.

7. Army of Crows and Ravens 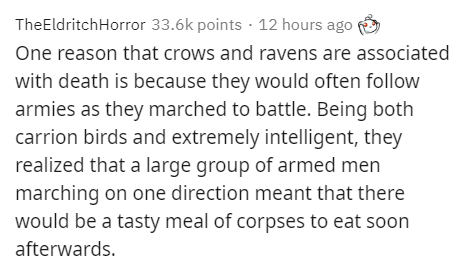 People really do lack common sense and decency. Serial killers are something that is beyond my imagination. The fact that people feel it is okay to kill one person after another whenever they feel like it is absurd. Humans have so much darkness to them, I am just glad not all of us are plunged into it.

9. The turbulence of the tarantula

Every second I feel the urge to ask the universe why it creates horrific creatures like tarantulas. Honestly, what was the need for such creepy insects?

I don’t know about you guys, but this just blew my mind away! I never thought such processes existed and that parasites are capable of this much. I thought we were overestimating the dangers of parasites but apparently not. They are capable of probably more than necessary!

11. Too much happened in very little time!

12. No wonder our veins become so visible.

See, I always thought that a person’s skin gets really thin when they get older. I always saw older people having such delicate skin and their veins being so visible. This makes so much sense now.

I cannot believe that this actually happened. This has always been a nightmare for all of us but I never thought it could actually happen. A tree was growing in the lungs of this person! This is beyond absurd.

14. The evolution of the medical field. 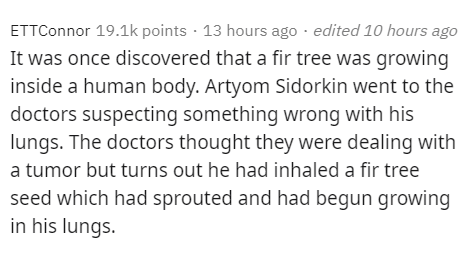 It is always insane to know and learn about how far our medical field has become. Doctors in earlier times have made some huge blunders and there are probably many more that did not make it to the reports. 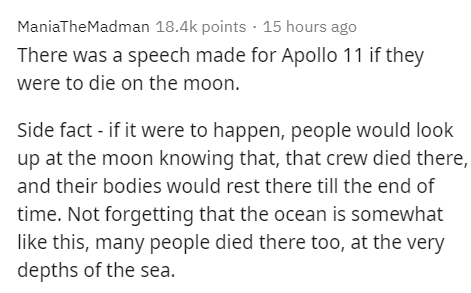 If anything keeps me from travelling to Mount Everest, it is the thought that I might die there. What is even worse is that you will never have a proper burial. Your family will never be able to see you for the last time.

17. Damn, I’d rather live with that octopus bite 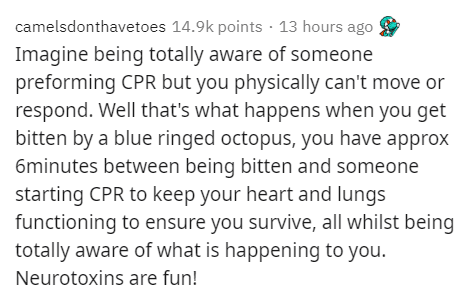 Six minutes? Woah, that is a very short time to arrange a CPR let alone a doctor. Quick question though, what happens to those people who do not have access to CPR or a doctor? Do they just die on spot? 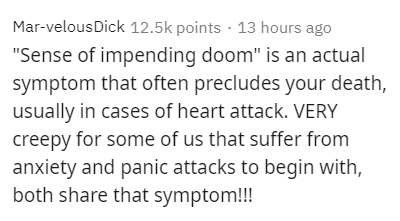 This is actually true! I have heard so many people tell their stories about being a second close to death. They knew they will die the next second but miraculously they survived. This is the most terrifying thing. I wonder if their outlook on life changes after a near-death experience.

19. Real corpses used for a film

That seems too unethical! Well, you can count on old times to cross all boundaries and ethical concerns. 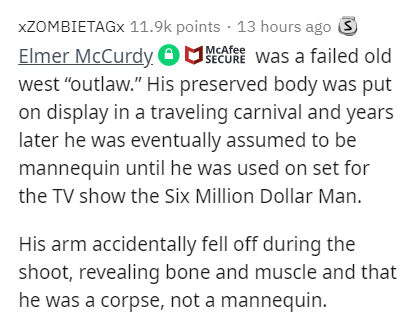 I am seriously questioning the ethics of people who arrange festivals and even filmmakers. They have no respect for corpses and dead bodies.

This is so unsettling.  News channels really do plan everything. 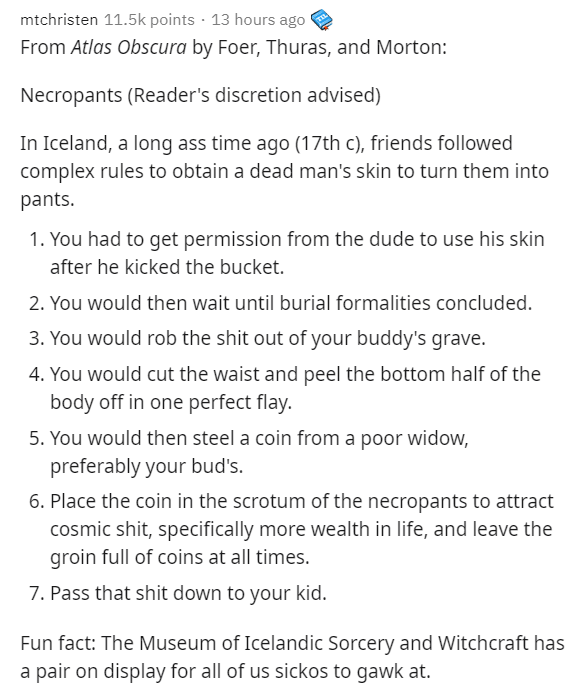 24. What is the obsession with human bones? 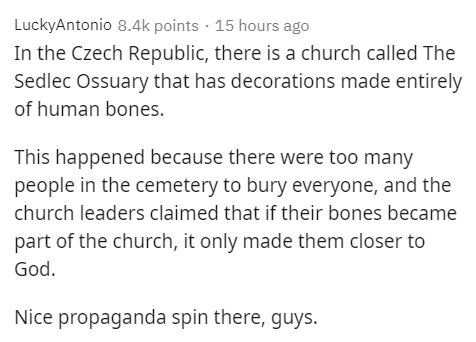 Seriously though, what is the obsession with human corpses and human bones 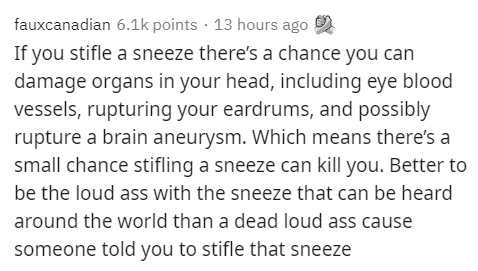 It is so crazy how delicate the human body works. You can cause so much damage to your body without even a warning by doing one single action. 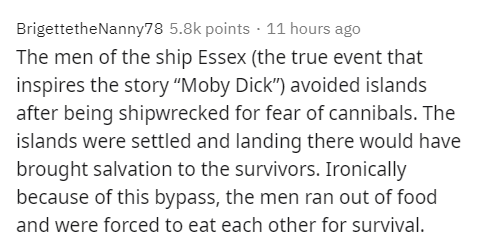 Oh, God! Basically, humans are capable of anything at all during harsh circumstances. This is concerning!

After learning about these absurd facts, I will be constantly looking around for more information. There is so much about our environment that we did not know. For example, I did not know that dust is basically the result of our dead human skin? Plus, it has microscopic bug shit. Damn, I am probably never going to breathe again.

Which fact freaked you out the most? Let us know in the comments!