You can’t get free food.

I know many people hate sending food back or even feel embarrassed doing it. I know I have eaten things I didn’t like a lot of times just because I didn’t want tos end them back. However, even when I have sent them back, I know that I can only do that if I haven’t eaten everything on the plate beforehand. That is just a simple rule after all. Even if they are going to throw the food in the bin, that still doesn’t mean you have the right to have free food.

Although that is not what these people believed. You see, they got an overdone steak when they probably asked for medium or more on the rare side. So they understandably asked to replace the dish. Now, It all seems normal until they told the server they weren’t going to give back the other steak as the friend would eat it for him. Their reasoning? ‘Because it was going to go in the bin anyway.’

I understand not wanting to waste food but that is not how these things work.

That is what everyone does if they don’t like something. 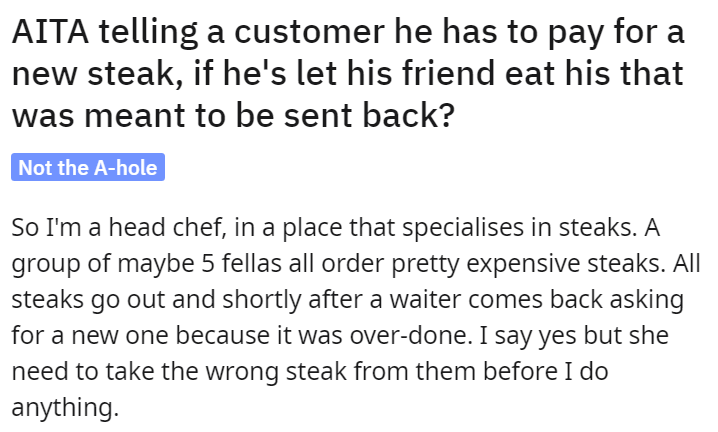 Thankfully the bill was paid beforehand, but they are probably not going to come back. 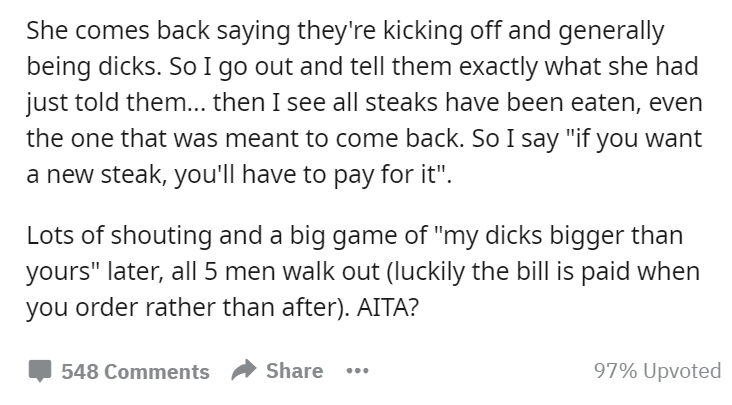 It might have just been pretty of me to have not let his friend eat the wrong steak. It was going into the bin after all and the table had spent a lot of money during the night. 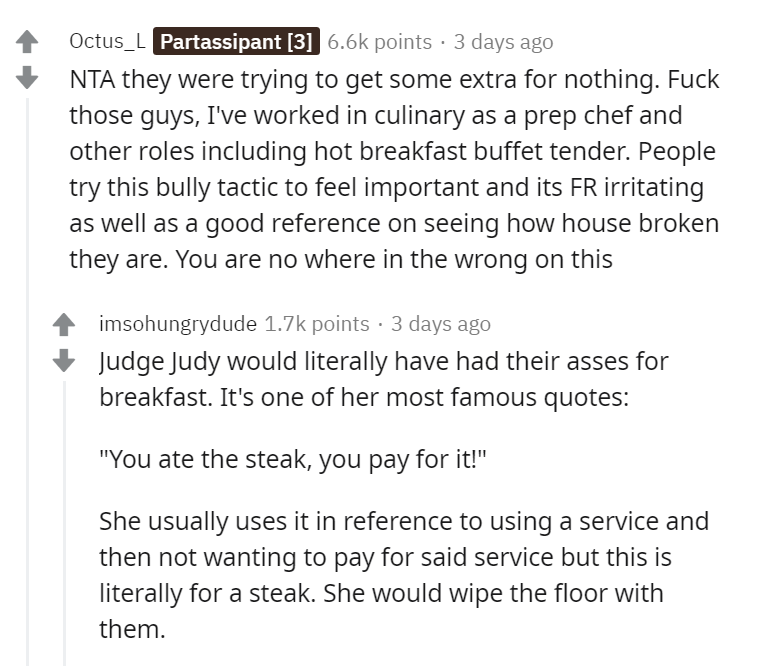 That is a very good question. Perhaps he just didn’t want to waste it.

I’m a chef too, and yes while food waste is a problem in the industry, the golden rule is that if the food isn’t up to standard then it gets SENT BACK AND REPLACED.

It doesn’t make a shit bit of difference if it’s going in the bin or not, if your food isn’t good enough then you send it back and get a replacement that is free of charge. In my place of work you give them a free dessert or drink to make up for the mistake, and you’d take it off the bill if they don’t want a replacement or anything else.

As for comments saying to do your job right in the first place, different customers sometimes seem to have a different understanding of how well done a steak is. A good example of this is my own mother, she says she likes and cooks her steaks rare, when actually what she cooks/eats is classed as blue. –xSarawwr

It just depends on the individual. 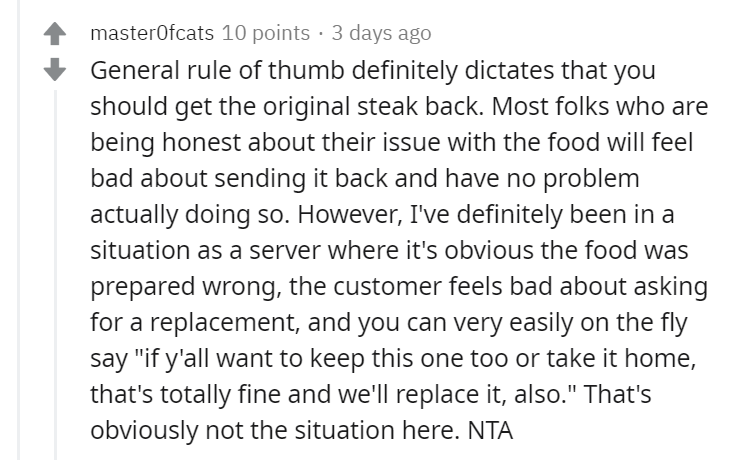 That is a different story altogether if you ask me. 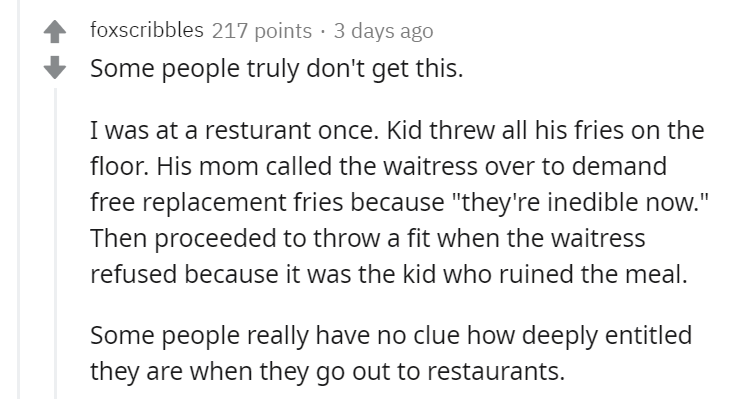 Exactly! But maybe they were being forceful or something?

That might have been a better way to handle this situation.

My husband likes his steaks very rare. We frequent a local place where we are known, and he knows the chef and cooks. He orders it “Dave rare” and they all know what it means. When we’ve eaten at other places, he always tells them very rare, and he doesn’t have a problem sending it back for another 30 seconds of cooking, but they can’t ‘uncook’ it if it’s over done. –Montanapat89

I thought most people just knew this? 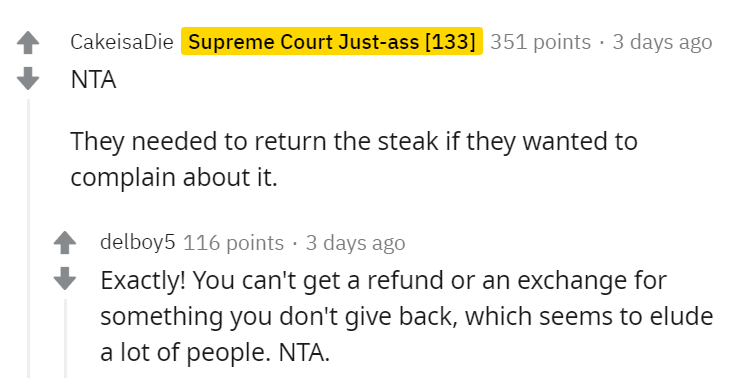 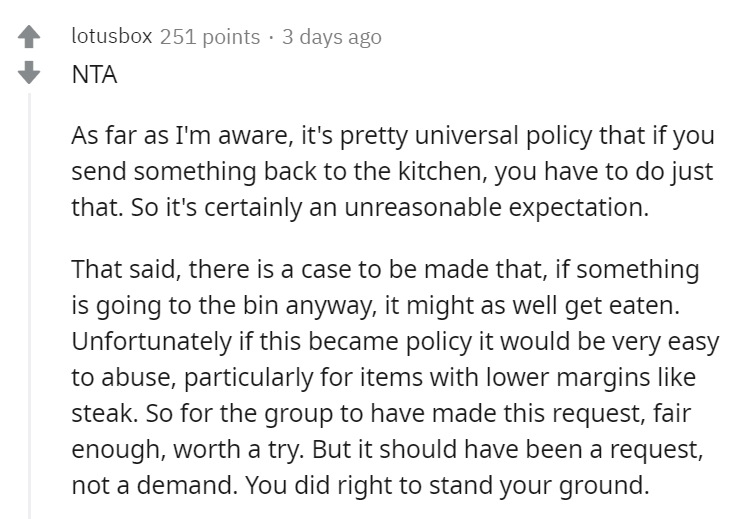 I actually did not know that.

“They won’t let me bring the steak back, because his mate said he’ll eat it if it’s just going to go in the bin”.

NTA – They don’t get to decide that – the restaurant does. Otherwise, people would complain all the time and say “I don’t like this, remake it, but I will still eat this one since it’s just going into the rubbish.”

My dad was a bartender for over 40 years, he had a guy who was always trying to get one over on him and all the other bars in the area. He would come in at busy times, order a double mixed drink, my dad would bring it, and he would say “What is this? I ordered a single.” And the guy would reach over to pick it up, my Dad would swipe it back, apologize, put it to the side and make him a single.

The guy would then become very concerned about the double drink – “Well what is going to happen to that drink? I will take it if it is just going to go to waste.”

Dad would say – “don’t worry about it – I will keep it for when someone needs a shift drink.”

He has a million stories for this guy, but yeah you are NTA they were trying for a free steak. –EdwardRoivas

Or they could have just sent it back and avoided this whole mess.

Who do you think is in the right here? Comment down below and let us know.