Is more money ever a bad thing?

I know some people would say more money, more problems but that is not always correct. After all, money is what makes the world go around. And if your partner is making more than you, what is the big deal anyway. After all you are a team and if one is making more, both should be happy. However, many people don’t think like that especially when it comes to their wives or girlfriends making more than they do.

Perhaps it has something to do with them feeling emasculated or some other bull that they say is not true. But I thought we had moved on from that. Some people are naturally smarter than others and that is just the way of life. I understand feeling inferior because someone is making more than you while working less, but then you are the one who has the problem not them. And that is what this guy needs to learn.

First, we get a little bit of background on what they both do.

She apparently makes double the amount he does and that should be a good thing.

But now we get into the nitty-gritty of things. 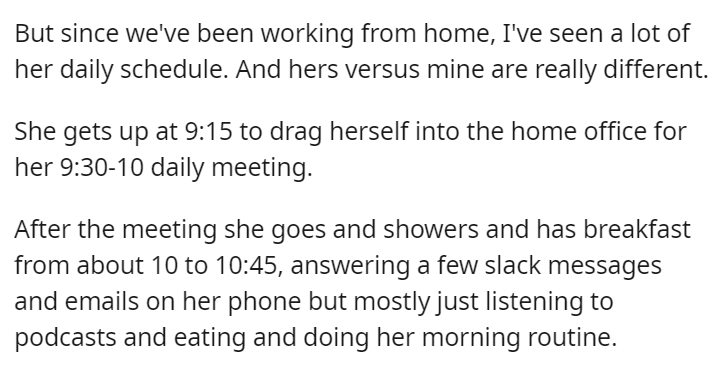 It isn’t that she is lazy, it’s just that she can better manage her time.

That isn’t her problem though, is it? It isn’t as if she is on the verge of getting fired.

Honestly, I would agree with her, It is not his place to question these things. 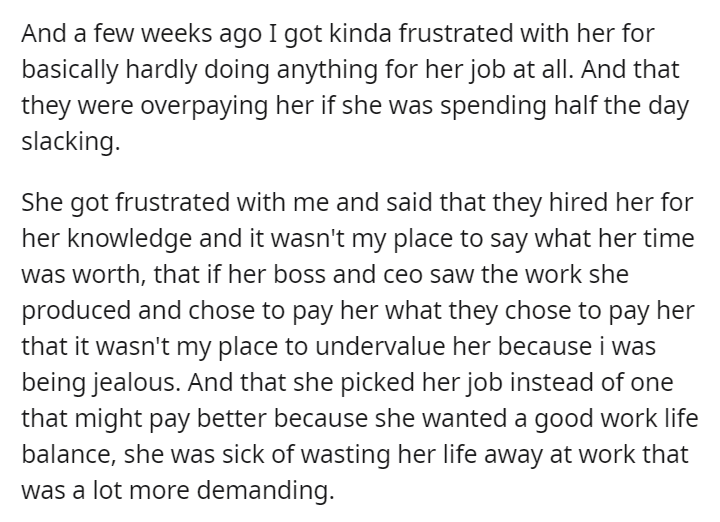 She has worked hard for the things she has now and nobody has the right to make her feel bad about that. 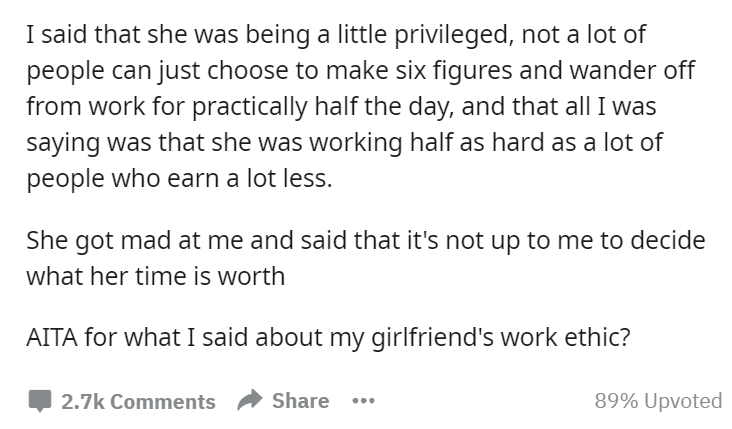 I got frustrated with how my girlfriend is acting really lazy about work and is getting paid a lot regardless, and said that I thought she might not deserve what she’s being paid. She got mad and said it wasn’t my place to talk about what she deserves in terms of pay. 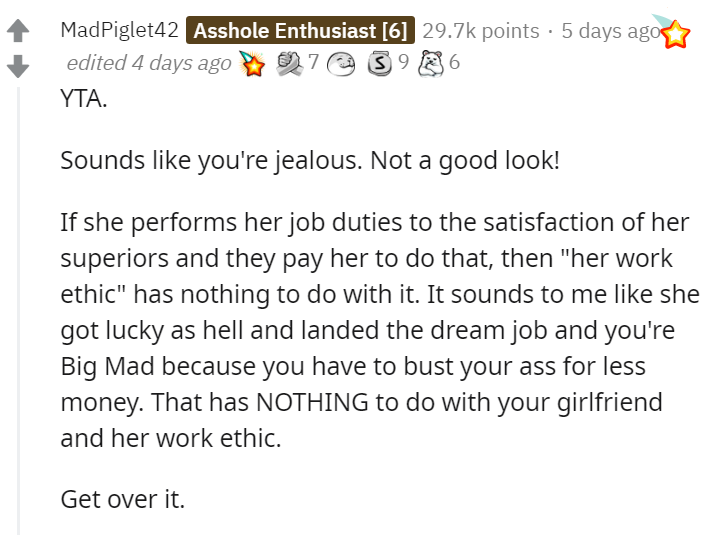 If she knows her work and is doing it correctly then nobody can say anything to her. 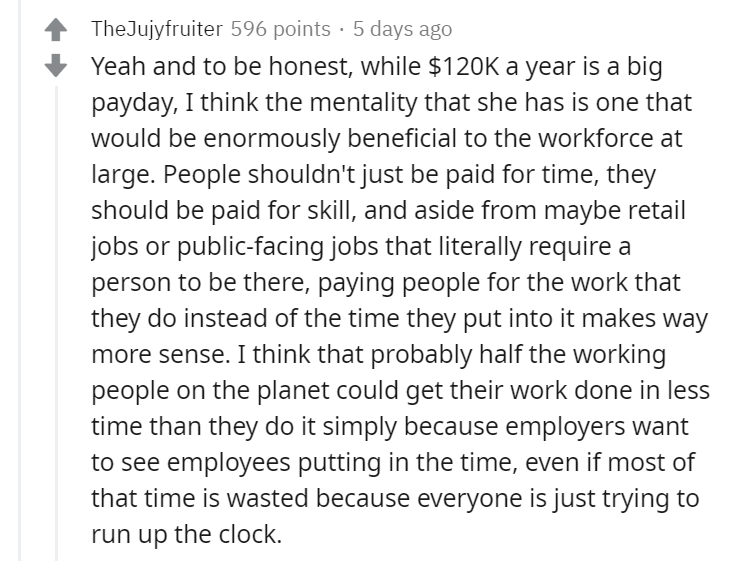 Some people are just a tiny bit lucky but that doesn’t mean they don’t work hard. 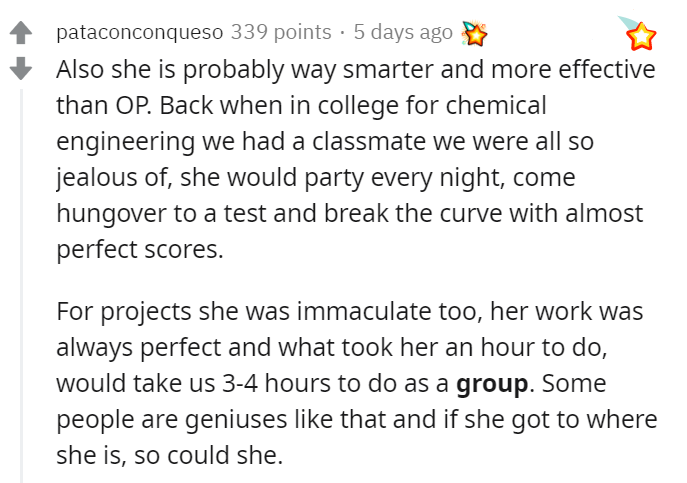 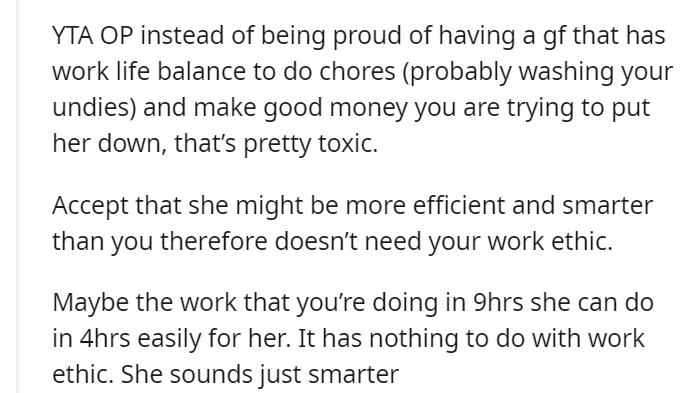 He is clearly quite jealous over the fact she makes more than him.

Even if it was the same as when she went to the office, why should he care? 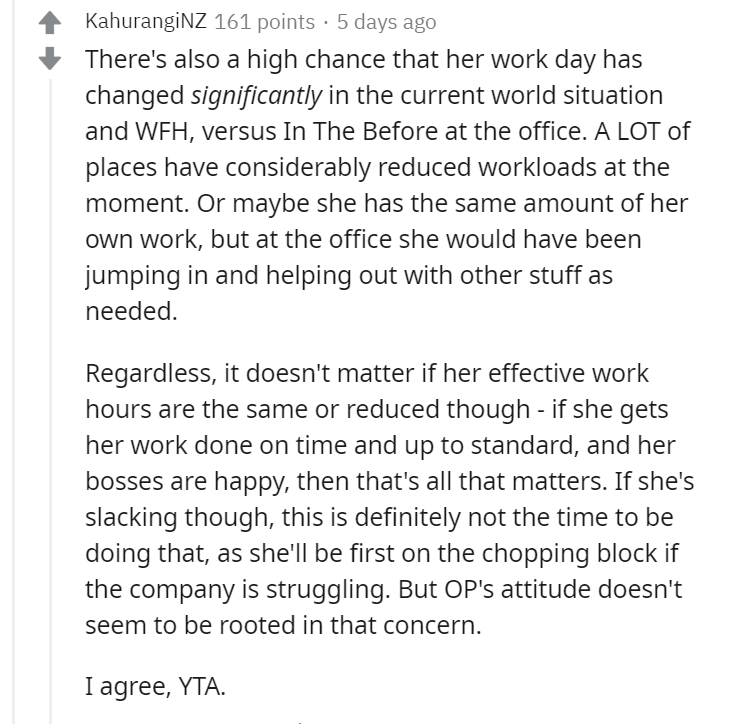 When I’m busy I am BUSY. Like, work 12+ hour days busy. But that’s not a frequent occurrence – usually I’m busy for part of the day and the rest of it I’m kind of just faffing about/waiting on email responses.

As it is, he works in a different state, four hours away. He’s been up to my facility once since he’s been there (I’ve been down there a couple of times). I trust if there were issues with my work performance, he’d be around more. Or I’d hear from him more.

If I leave early, I always check my emails every 20-30 minutes.

Just because I got lucky and have a fairly cushy desk job where I can leave early or slip out for appointments and things doesn’t mean I don’t work hard/have poor work ethic. I just work efficiently and know what I’m doing and have the benefit of a flexible company. –yakkylime

What are your thoughts on this relationship? Comment down below and let us know.