How is a 40-year-old woman considered a baby?

I know 40 is the new 20 but is it ever okay to infantilize someone? I am not saying taking over as a mentor to teach someone is bad. After all many people benefit a lot from that sort of arrangement, but it is their choice. However, this woman keeps calling her co-worker a baby. Even if she does look quite young does not mean you can adopt that behaviour towards someone.

I would even go as far as to say that this is age discrimination no matter what others say. And this isn’t even a new thing. Apparently this has been happening since she started working there. This senior employee thinks the 40-year-old woman knows nothing about the world. Although the curious thing about this is that a new employee the same age as this woman started there a while ago. And lo and behold, she didn’t treat them this way, so the question is why does she do it to the poster of this story?

You can find out for yourself by scrolling below.

I would feel pretty awkward if someone said that to me, and I am in my early twenties. 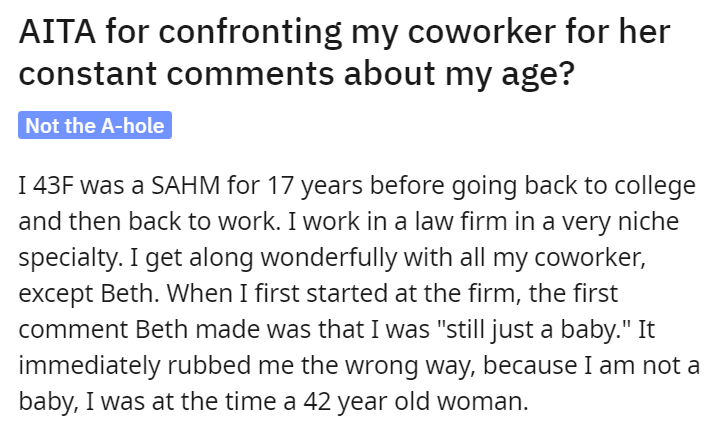 How old is this woman? More than a 100 years old or something? That is what I would think with the way she talks about everything.

So the woman had enough of dealing with this so decided to talk everything out. 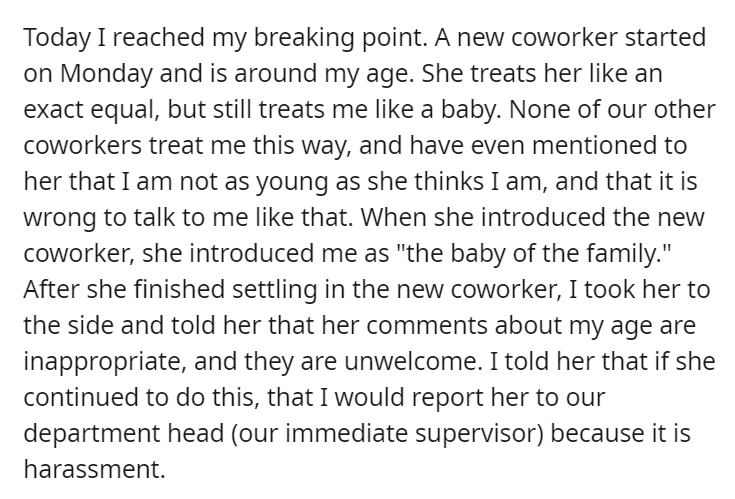 However, unsurprisingly enough, it didn’t go without a hitch. Who would have thought?

What was she crying about? That someone stood up to her?

She isn’t even that much older than her. I have no idea why she treats this woman like this. 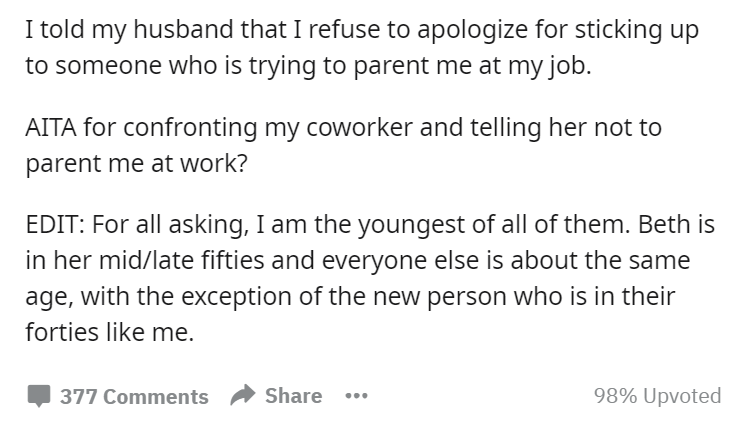 A joke has to have a punchline right? 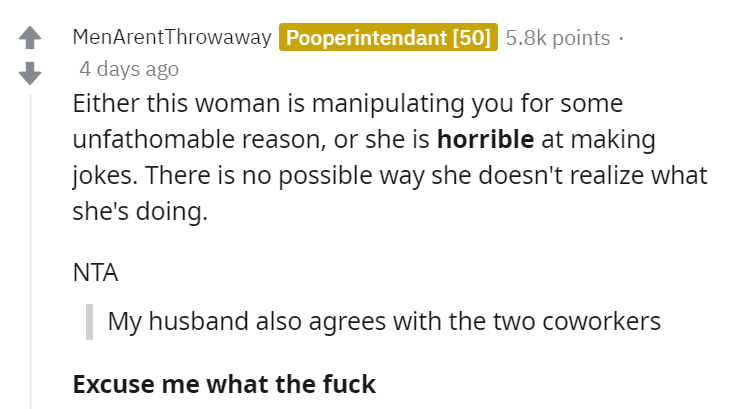 Before blowing up on this part, I think more info is needed rather than just husband agrees with them and “what the fu*k”.

He could be an idiot, sure. Could also be he is worried about the person who has been there longer maybe somehow being able to make it harder on OP at the office or cause some drama. Workplace drama blows and in some cases, just isn’t worth it. Dunno the situation here.

Edit: to be clear I think OP is NTA for sure and definitely handled it correctly. I just am not going to say OP’s husband is an**hole when he may have had valid concerns. We don’t know. –Sarothias

Having a young face is great but doesn’t mean people can put you down because of it. 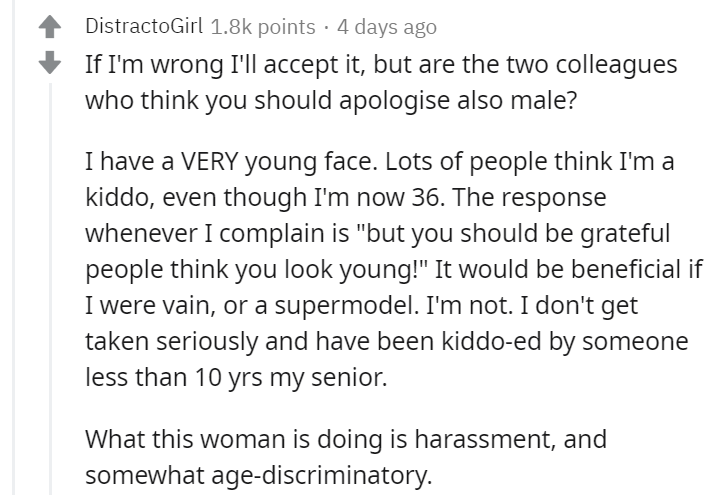 I would agree that she needs to report this to someone before it escalates. 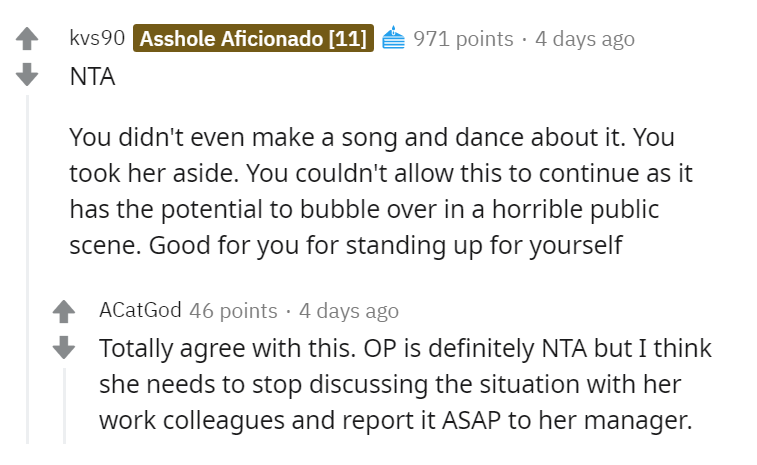 Being a mentor and a parent is quite different. One is professional while the other is personal. 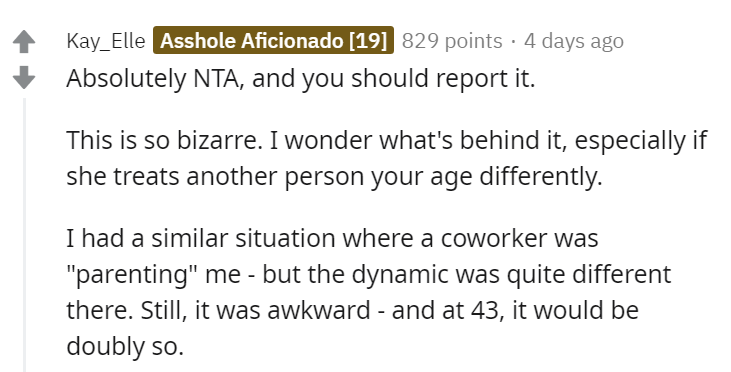 Many people accomplish a lot at a very young age, and we should celebrate that. 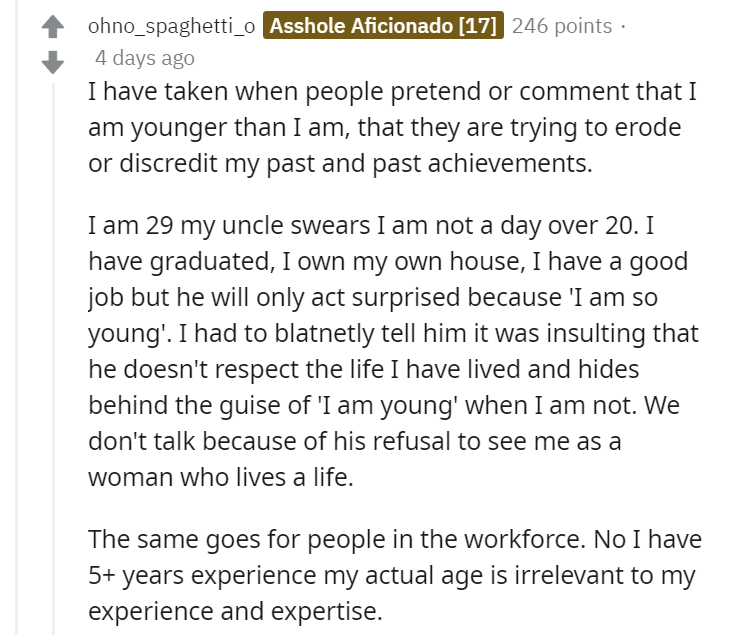 When I was 19, I started working as a housekeeper at a motel. I was the youngest by far, as most of the other ladies were in their late 30s to early 40s. And it probably didn’t help that everyone knew I was on the spectrum. So one lady in particular kept making a big deal out of being my “work mother”. She said I was about the same age as her sons, so while we were at work, she would act like she was my mother too or something.

It was sweet at first, when I was still new to the job. But as I started getting the hang of things more, it started to feel more and more condescending. Like when she’d insist on “showing” me how to do stuff that I could already do in my sleep. Or when she started calling me things like “Baby”, even around other co-workers and motel guests. In the end, it just made me feel weird to be treated like a literal child again.

I don’t work there any more (for unrelated reasons), but I never did end up saying anything to her. I didn’t want to upset her, because she was such a genuinely lovely woman. She was doing it out of kindness, so I just let it go.

OP is NTA, though. If the comments were making her uncomfortable, then she had every right to say so. Her co-worker is TA for keeping it up after being told not to. –Citrine_f-1S3_c-7XC 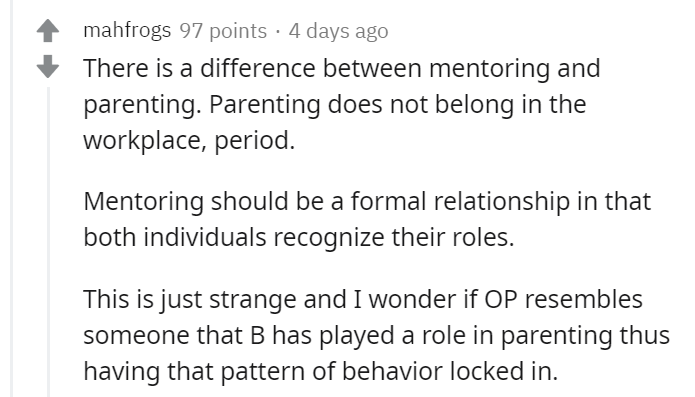 What reason do you think she has for acting this way? Comment down below and let us know your thoughts. And don’t forget to share!