Women don’t have to sit there and take it.

I know that sounds pretty self-explanatory and yet we live in a world where this simple thing still surprises people. Many think that a woman has to take a compliment with a smile even if the intentions behind that might not be so pure. Or even if it may come off creepy and makes the woman uncomfortable.

I don’t have enough fingers to count how many times I have been n a similar situation. And yet couldn’t say anything because it would be rude to call out an elder. So it is quite surprising to see the father getting mad at her daughter’s boyfriend for standing up for her. I would think the father would be pissed at the creep, not the guy who did the right thing.

All will become clear soon enough.

First, we get a bit of background behind Jack and why they were in this situation in the first place. 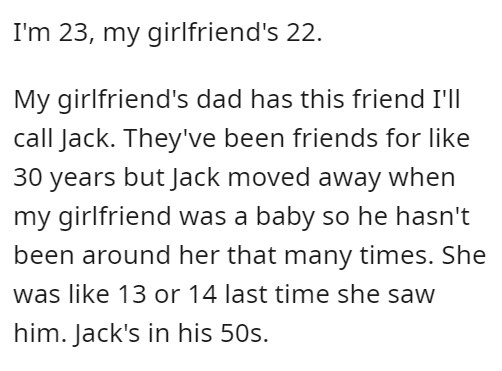 I can understand his point of view in that statement. 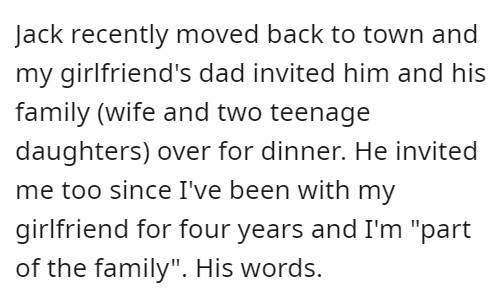 Complimenting a girl once who is essentially your children’s age is fine but this is plain uncomfortable. 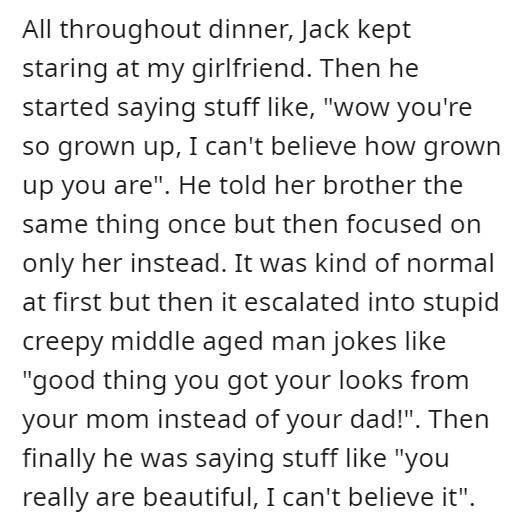 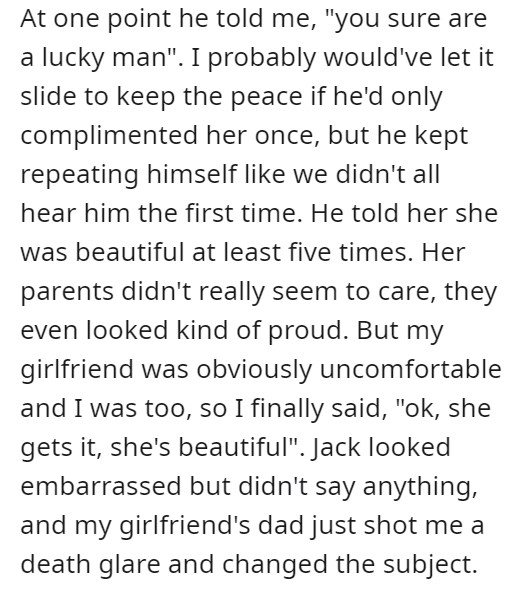 Being nice by paying so much attention to his daughter? What? 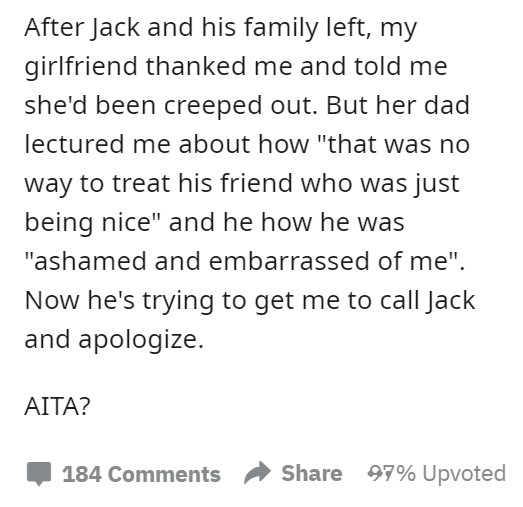 NTA. This was a lose-lose situation. You say something, you piss her dad off. You don’t say something, she sees you not standing up for her. I think you made the right choice though.

Play this by ear, but I wouldn’t be quick to call Jack to apologize. Hopefully, he’s realized his behavior was inappropriate and won’t repeat it, but if you call to apologize, he may see that as permission to pick up where he left off. It may be that if you avoid your girlfriend’s dad for a bit, this will blow over. On both counts, discuss this with your girlfriend and see what way would be most supportive to her for you to handle it. –Fleegle2212

Most fathers are quite overprotective, but this dad just doesn’t understand anything. 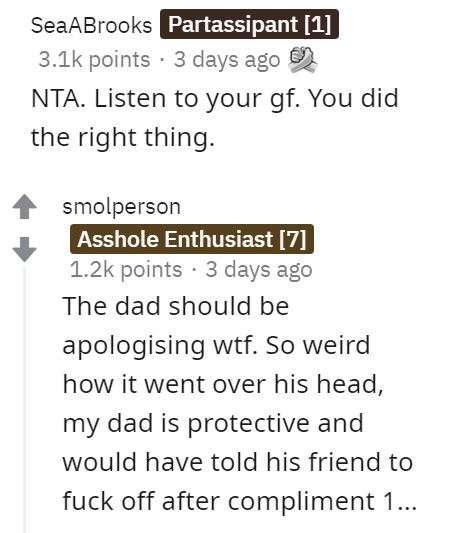 Maybe if she tells him herself, he would finally get it. 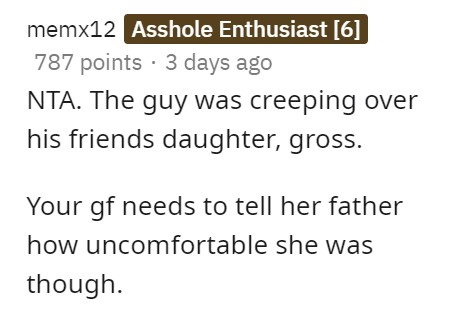 It was definitely not as bad as what he was doing. 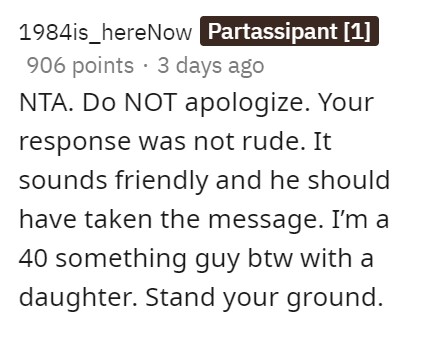 NTA. He was being creepy and making your GF uncomfortable. Clearly, your GF wanted you to stand up for her, and her opinion is the only one that matters here.

She should have a talk with her father about those comments not being okay. –StarWars_Girl_

That is how many of us are raised and start to think all of this is normal. 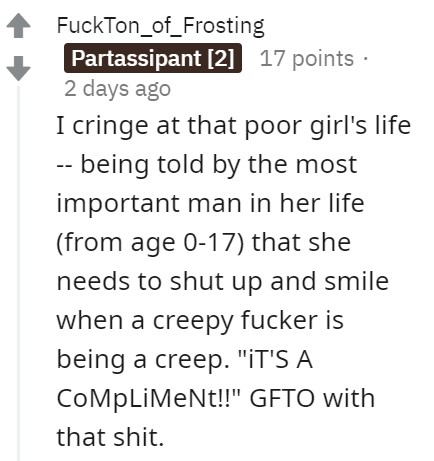 That might be quite a violent response but I get the sentiment behind it. 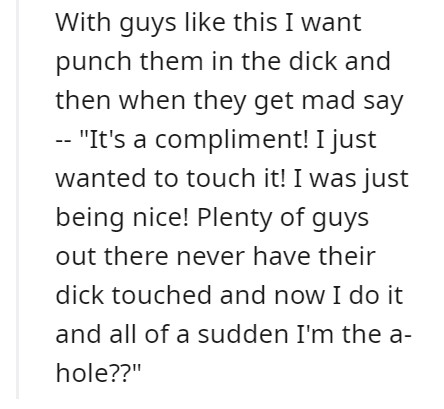 He should be thankful for what you did rather than the other way around. 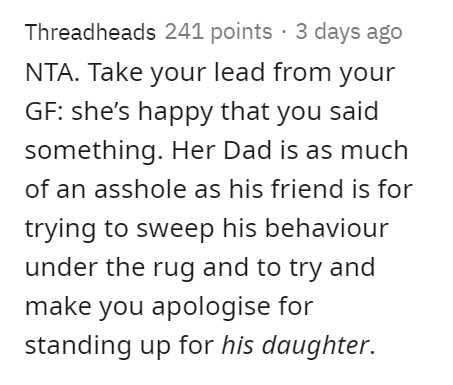 NTA. One of my dad’s friends got super inappropriate with me one night at my dad’s wedding (which he crashed). He tried to jam his tongue down my throat. He had leered at me since I was a teenager, but this was the first time he got physical. My husband is basically the most chill dude in the world, and I thought he was going to actually murder the guy.

I didn’t tell my dad about it that night because I didn’t want to ruin the wedding, but I did mention it a few days later. Dad was already pissed at his friend for crashing the wedding, but I’m sure he would have gotten over it. Once he found out about what happened to me he called his friend and tore him a new asshole. As far as I know, my dad still refuses to have anything to do with that friend 10+ years later. And they had been friends for 40 years at that point!

I wish your girlfriend had a dad more like mine. But since she doesn’t, I’m glad she has you. –TealHousewife

What would you if you were stuck in a similar sort of situation? Let us know in the comments below and don’t forget to share with your friends as well so they can join in the discussion as well.