Accepting a bribe is illegal.

And yet it is rampant in most industries. If you want something done fast or on the down low, forking over some cash is the way to go in this day and age. Now I am not saying everyone accepts these bribes because thankfully there are still some honest souls left in the world. However, that also means that people who want that extra money will do anything to create issues for those who won’t give in.

That is what this guy tried to do. Apparently, he had a problem with a supplier because he was an honest hardworking man who didn’t bribe anyone. And he wasn’t going to let that go so he decided to create a problem with shipping just so he would get the message. However, there was still one employee in the company who wasn’t going to let this happen.

You don’t have to worry, it is not as it sounds.

First, we get a bit of background on what kind of work this company does. 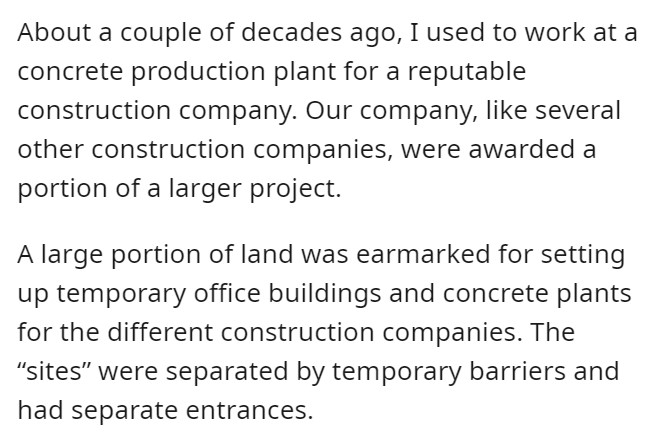 It may not seem like pertinent information but the stone dust will soon come into play. 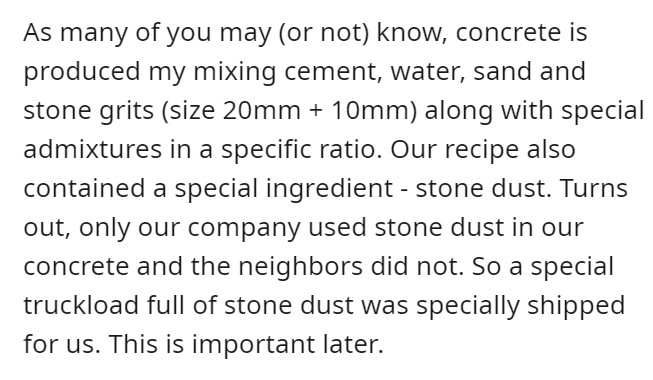 His job was to accept or reject oncoming shipments according to the quality of the product. 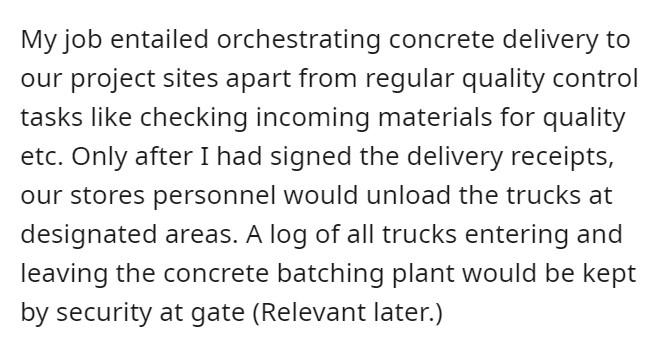 Honestly, I am not surprised that they would do this. Anything to get ahead right? 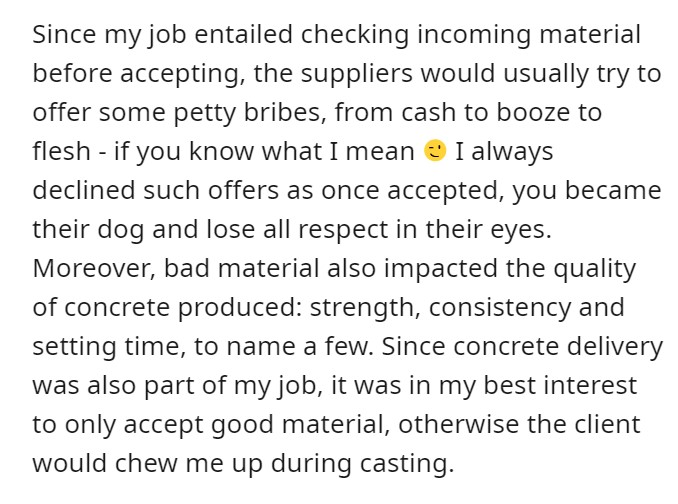 He might have no accepted the bribe but that doesn’t mean the boss was going to have clean hands. 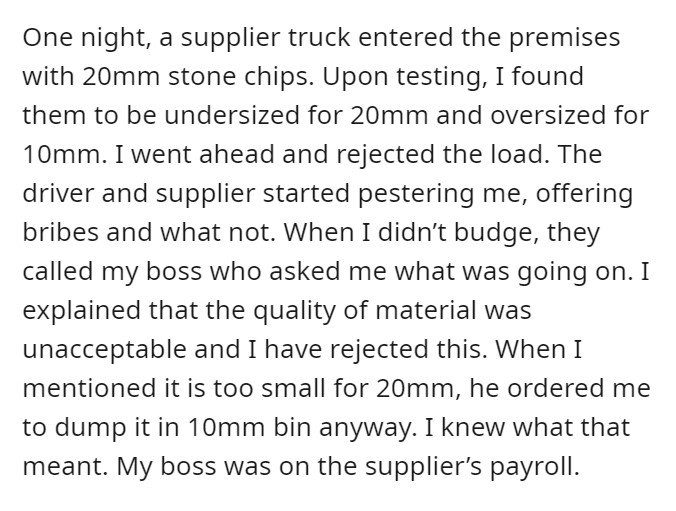 The boss wanted to teach the reliable supplier a lesson for apparently being good at his job. 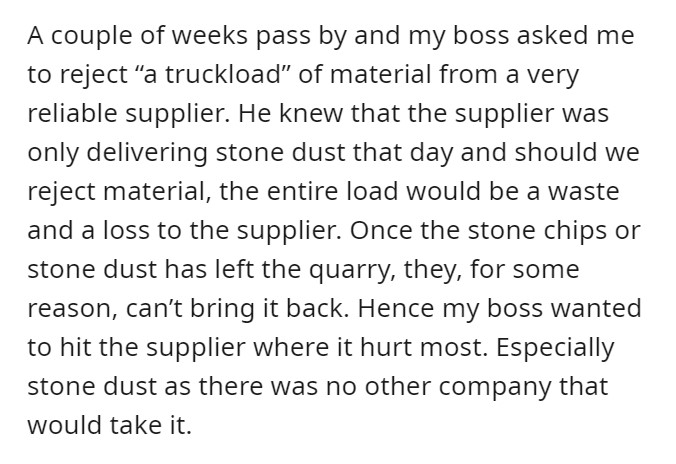 According to what I am reading here, the supplier clearly liked what he did for a living and wanted to improve his product. 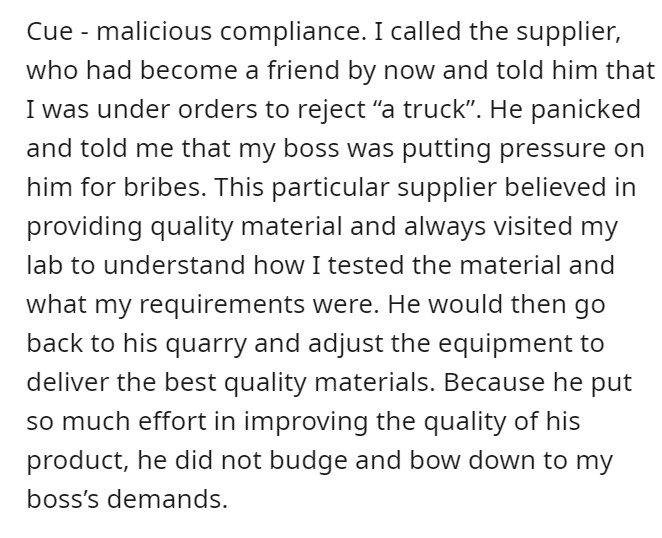 I’m often told that I should lie or cheat to get where I want career-wise or even get official business done, but I have taken upon myself to stand true to my values and remain honest regardless of the outcome.

Stories like yours give me hope and confidence to keep walking this path. I’m sorry someone stole your post, and I wish you all the best. –EmperorAnimus

Honestly, this is a brilliant idea and I would have never thought of it.

The boss couldn’t very well tell him why he wanted him to reject the other truck. 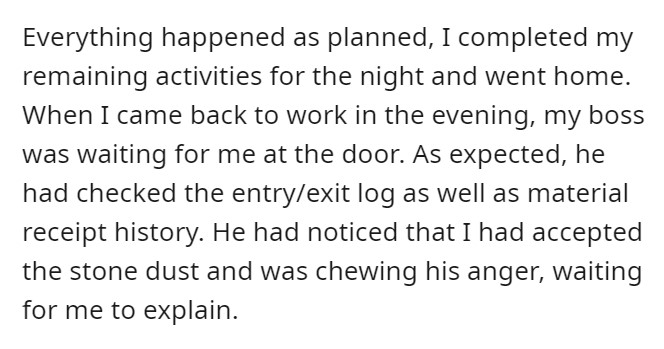 He also had a perfect excuse at the ready to deter his boss. 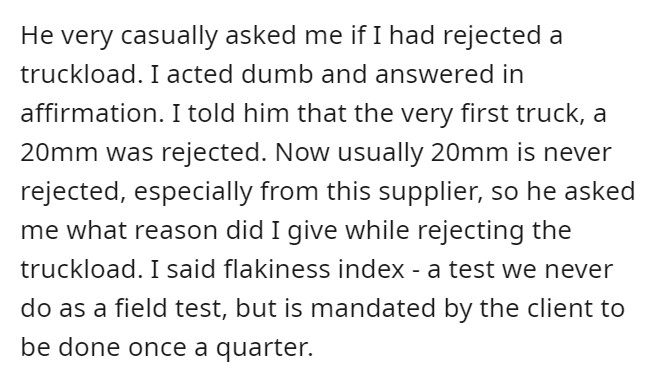 The nor pay increase doesn’t sound that great to me but at least you don’t have to deal with him anymore. 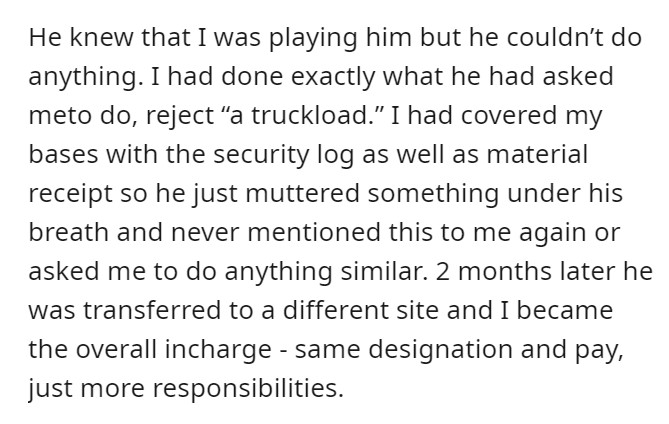 I was reassigned to a new school because I wouldn’t give C’s or better for students who were earning F’s. The higher-ups preach that everyone should go to college because you can be anything you want to be. Listen, I still can’t do a lay up nor can I sing without sounding like I’m howling at the moon.

Hard work and grit will get you places, but laziness shouldn’t be rewarded.

By the way, I have quite a few students with over 100% because of all of the opportunities for success I offer. One kid is even trying to reach 200%. Yeah, I take late work (homework included during the pandemic) up until two weeks before the semester ends and I offer extra credit opportunities to help kids master the skills I’m teaching, such as writing a narrative in a different genre. So they can blame me, place me where ever they want to, but I’m not playing their games and lying to these kids and sacrificing my integrity to make them feel better. –Kristie20

For those who didn’t want to read the whole story.

Do you think the boss got what he deserved or did this guy get the short end of the stick? Comment down below and let us know.