Many people don’t have a roof over their heads.

And this isn’t just exclusive to America. Anywhere in the world, you will find people trying to sleep on the cold hard concrete because they don’t have anywhere else to go. Some have mental illnesses, drug issues and others can’t find a job or lost their home because of a natural disaster. Every which way you look, it is a very sad sight to see.

However, these people not only don’t have a roof over their head but they get by on scraps of foods most of the time and are treated like sub-humans by many. This is pretty clear when people get disgusted by them hanging out in front of a fast-food joint for no reason other than they might be an ‘eyesore’.

So while what this guy did might be what any decent human being should do, we don’t. And that is why we need to spread this message to everyone.

It might seem like a very simple thing to do but I guarantee it meant a lot to the guy. 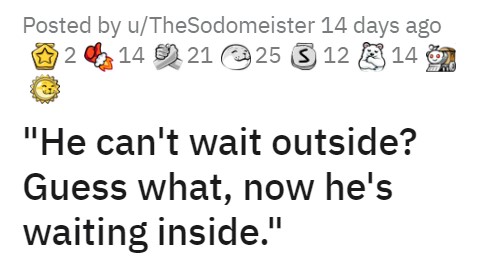 Nobody wants to intentionally beg but many just don’t have a choice. 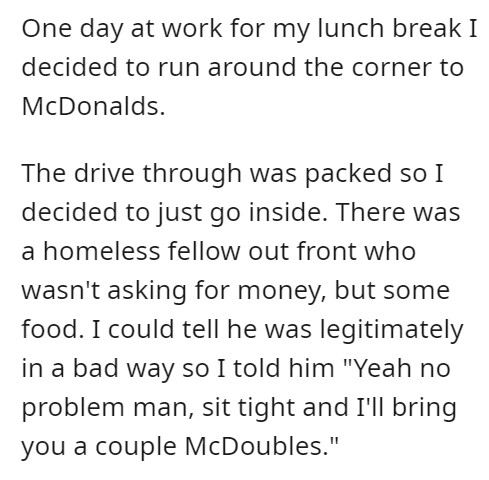 I can’t blame the employee here because they were probably doing what they were told to do. 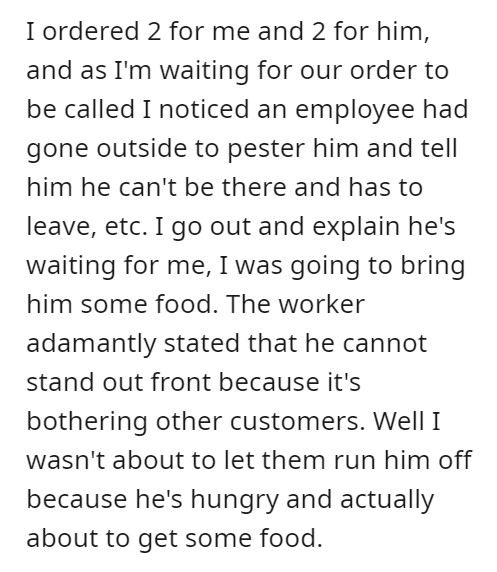 While some homeless people really have issues that they need to sort out, many others genuinely need help. 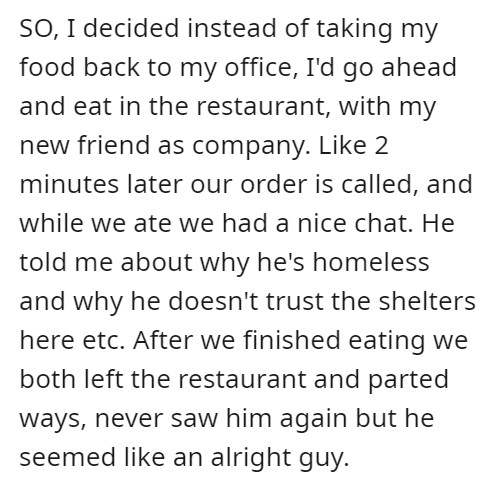 For people who didn’t want to read the short but sweet story. 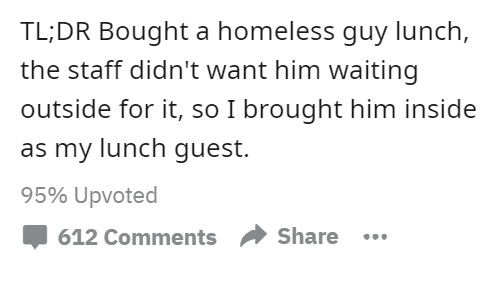 Many people shared their own stories in the comments about their own interactions with homeless people. 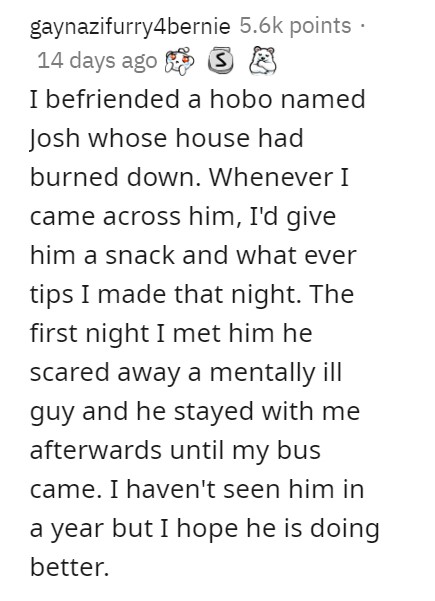 I’m glad to see I’m not the only one. I’ve been working at a kiosk next to a train station for the past 7 years, and we have a steady supply of homeless people hanging out there. In those 7 years, I’ve befriended a lot of them. One of them is a woman who was the only person to call me last Christmas. We’ve actually become quite close and text regularly. Another guy recently came by just to tell me he finally got his own home.

His face lit up when he told me he had vacuumed. Last week I heard a lot of commotion and when I went outside I saw another “regular” freaking out and screaming at random people. When he turned around and saw me, he immediately calmed down and apologized and thanked me for keeping him grounded. I can’t express how much those interactions, big or small, mean to me.

They often tell me that out of all my coworkers, I’m the only one that treats them like human beings and that breaks my heart. They’re there when I open up at 6 am and I feel safer because I know if something happens they’ll have my back. –Miss_Minus

There are many reasons, a person might not want to stay at a shelter. 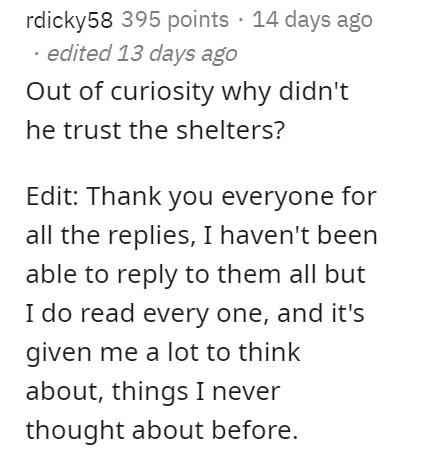 Theft, as the other Redditor said, is a huge one. You have to sleep with your stuff tied to you and on top of it or you’ll wake up with all your shit gone. Another is that they don’t let you have any kind of a pet (understandable I suppose, if hard). So he would have to get rid of his dog, and most folks would rather live rough than abandon their pet. He didn’t have the dog with him so I assume it’s back at whatever encampment he was staying in at the time.

He didn’t have a wife/GF but he says another reason people don’t go to the shelter is that they separate the men and women entirely, so while there they can’t see each other, and I think he also said they limit how much you can leave. I don’t remember it all since this was in 2014 but yeah, too many sacrifices for people who have already lost a lot to make the shelters worth it. –TheSodomeister

And while I am aware shelters are just trying to help, it doesn’t always seem that way. 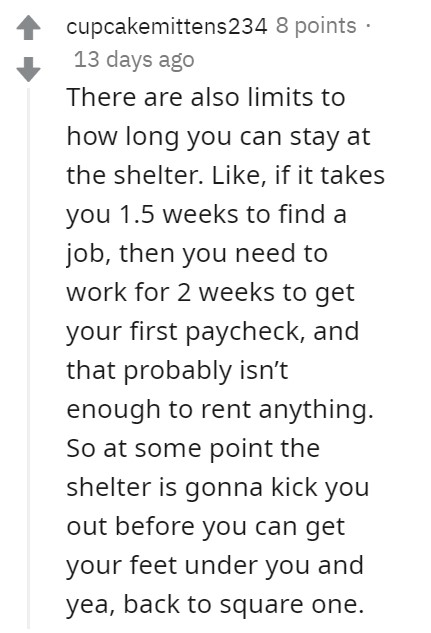 So it can be a hard life whichever way you go. 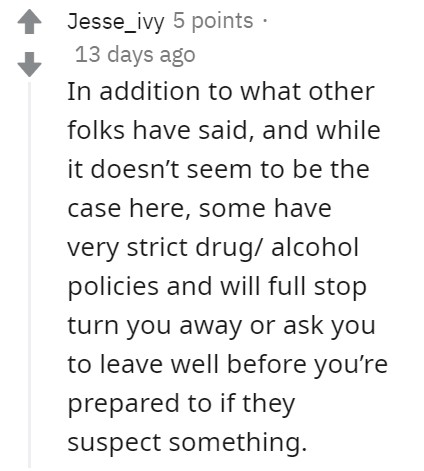 There are many stories like this one out there. 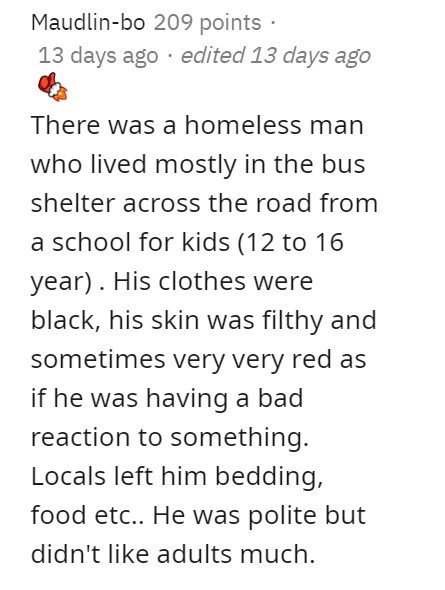 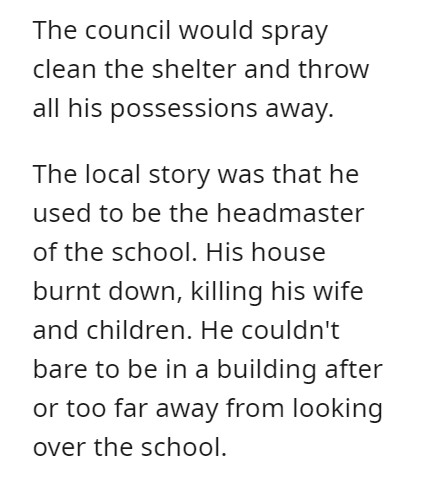 And yet not many people out there are willing to hear them. 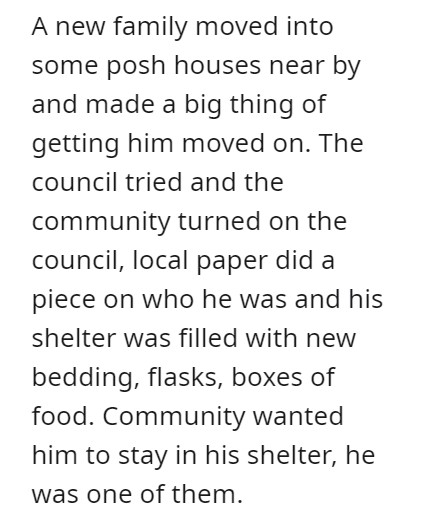 Why not tell your own experiences with homeless people? Comment down below and let us know. Don’t forget to share so others can read this message as well.