A wedding dress can be quite sentimental.

Some people rent it for the occasion and thus have no feelings attached to it while others spend years thinking about their perfect dream dress and then lock it away after the wedding for their next generation to wear. Whether their kids want to wear it is a whole other matter but that is their choice. While some are perfectly okay with lending the dress since they aren’t going to get much use out of it anyway, others don’t want anyone else to touch it and that is okay as well.

This mother-in-law doesn’t think so however. As she ‘asked’ her daughter-in-law to lend her the dress she wore at the wedding. The dream dress that she spend a thousand upon. And then the mother–in-law got angry when she was refused. Even asking for it is weird, but she went that extra step and did something that I would not have thought of. You can see for yourself by scrolling below and taking a look for yourself.

I understand not wanting to put him in that position but his mother needs to learn. 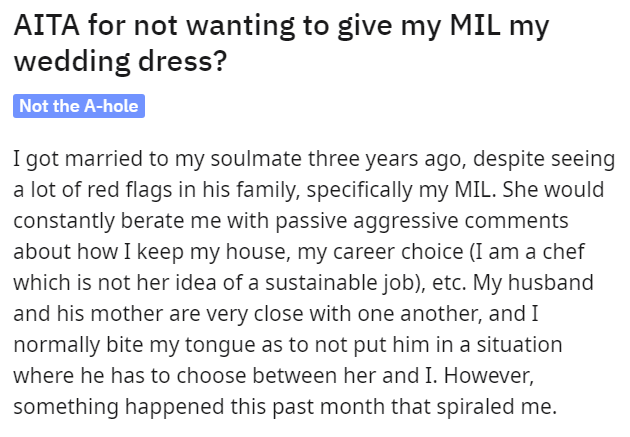 You have to admit, that is a bit weird or is that just me? 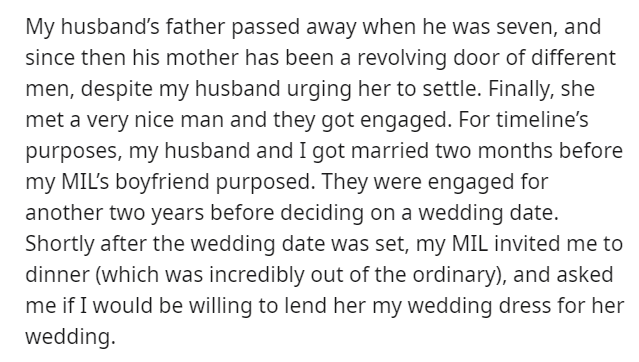 Wedding dresses can be quite sentimental and this should have been the end of it. 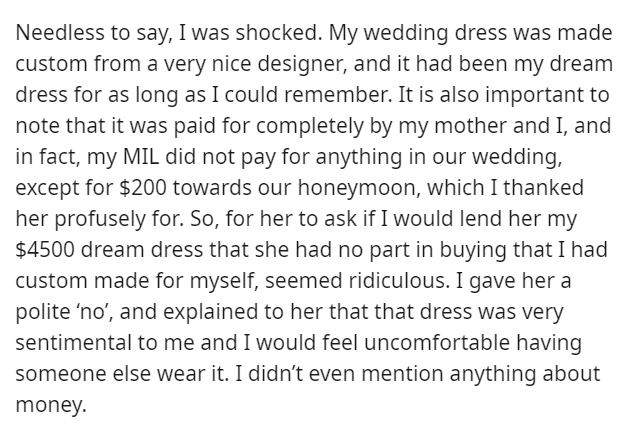 But as we all know people like this are not willing to take ‘no’ for an answer. 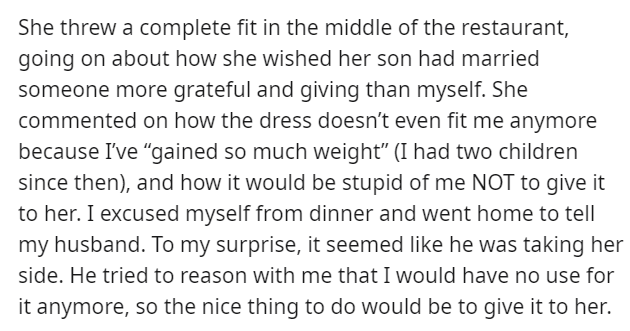 Then she went ahead and dis-invited her own son. 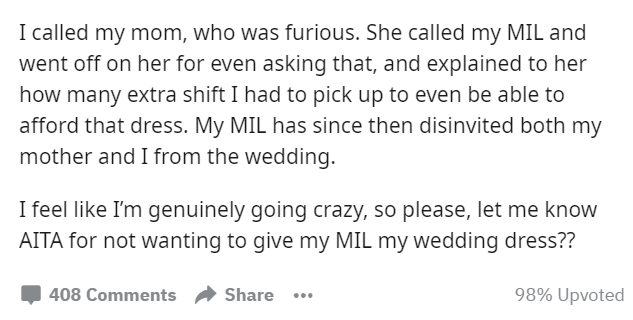 And the award for the worst mother goes to this woman.

That is essentially the last memory of her grandmother that needs to be protected. 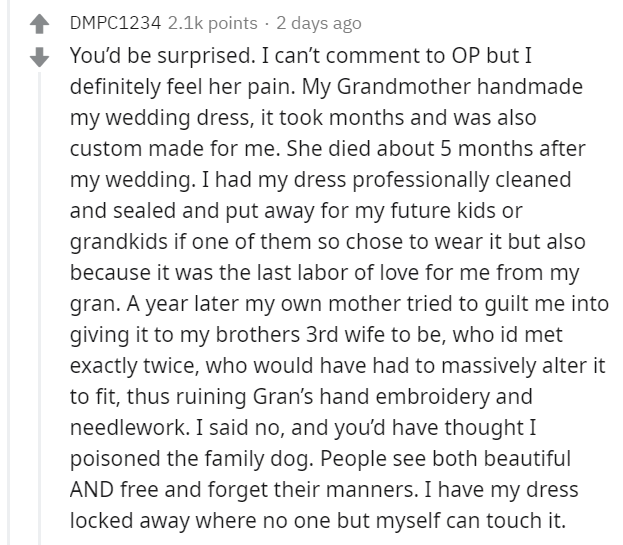 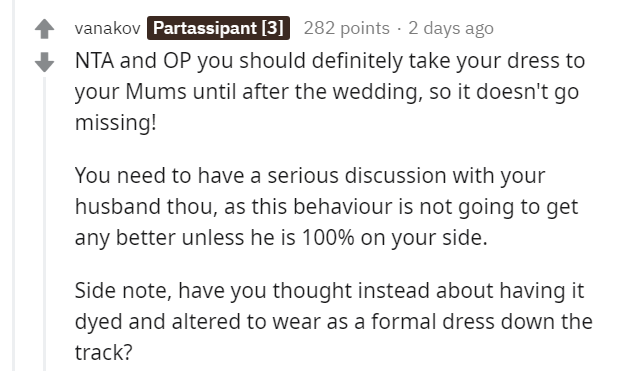 It should be everyone’s choice and should not be forced upon them. 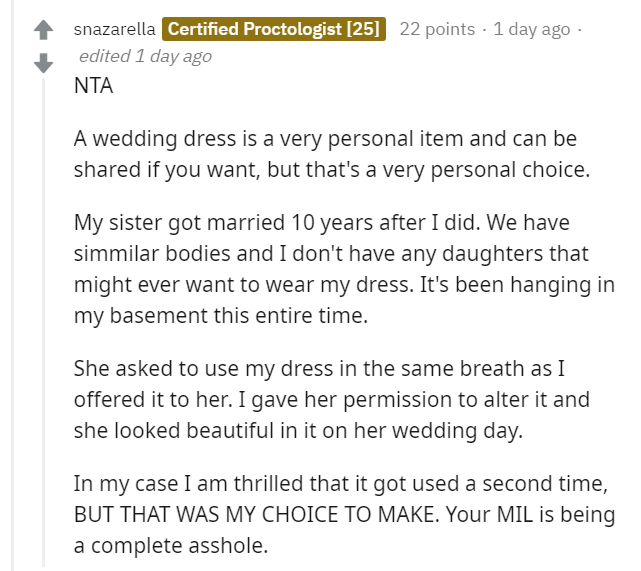 I mean he does need to get a clue if I am being honest. 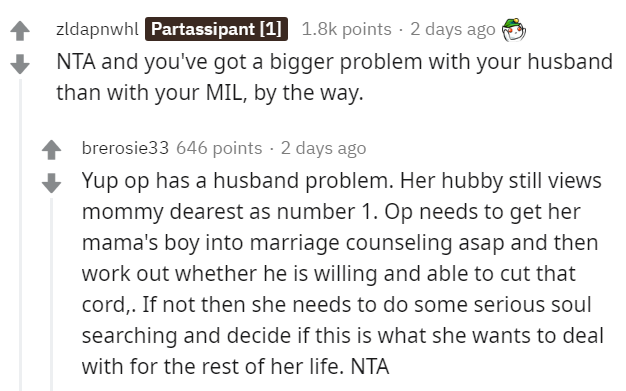 However, we do have an update, and it is even juicier than the story. 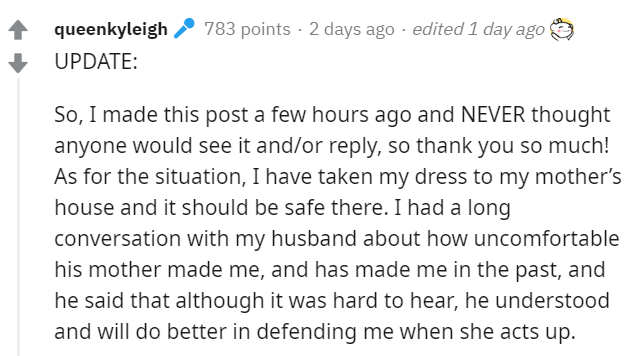 And lo and behold, the dress the mother-in-law chose is unsurprisingly quite similar to one she wore at her own wedding. 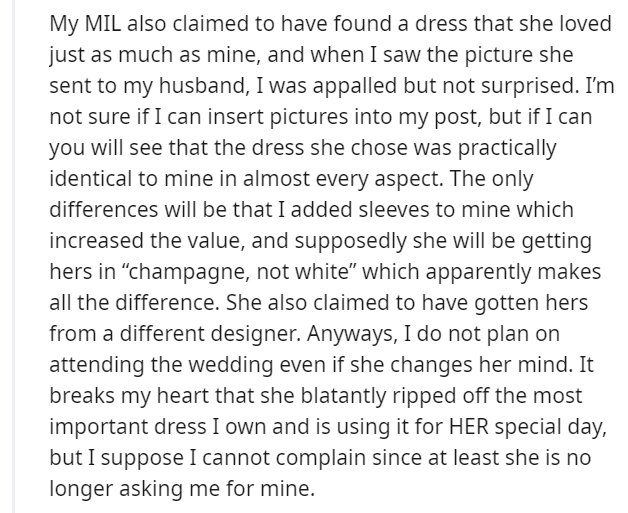 This is similar to the absolutely gorgeous dress that she wore but with sleeves.

Your dress is lovely and best suited for a younger bride. I would think you MIL would wear something more age appropriate. Unless she had your husband at age 7 she’s risking looking ridiculous. On the flip side a woman should wear a dress that makes her feel special and beautiful. I didn’t marry until I was 43, and I didn’t wear a traditional wedding dress, but more of a mother of the bride/groom dress. On one hand I was happy I didn’t spend an insane amount of money on a dress to be worn once, nor could I be accused of dressing too young, but I didn’t feel special or bridal either.

You are under no obligation to lend your dress to anyone. –witch59

At least she didn’t tell her son to steal the dress for her. 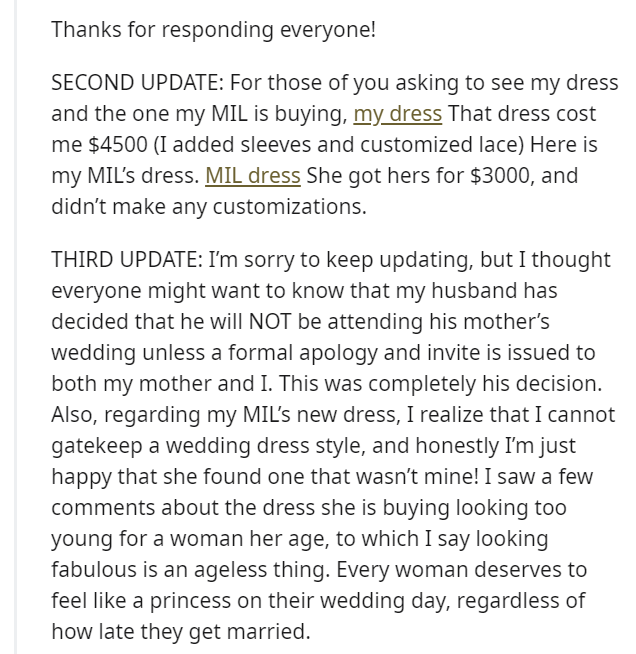 Honestly, she needs to be cut out of your life until she learns her lesson. 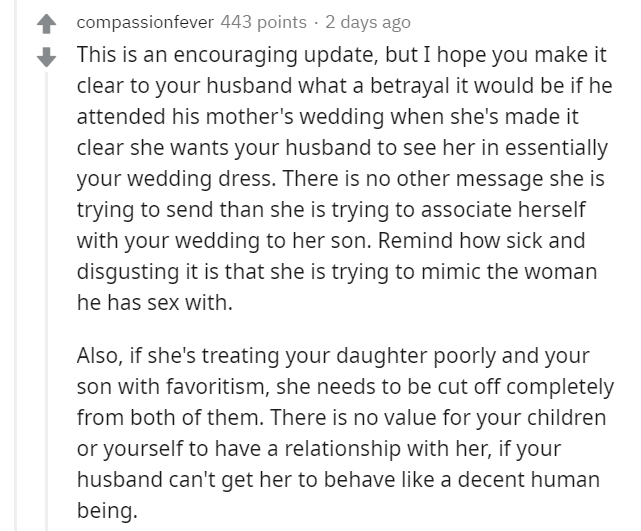 It’s honestly sad that she’s this desperate to rip off your look from your wedding, and that she has no personal sense of style or identity of her own. If she wants to make the focus of her wedding about the weird issue that she has with you instead of celebrating her marriage than that’s her problem, not yours.

Try not to give your MIL free rent in your headspace. Do what you can to put this stupid drama out of your mind. You’re not going g to her wedding anyways, and you’re not going to see her in her rip-off dress so there’s no need to think about it any further. She wants you to be upset about this so don’t give her that satisfaction! You already had a wonderful wedding and your MIL’s pettiness won’t ruin those memories.

Would you go to the wedding if something like this happened to you? Comment down below and let us know. –DiligentPenguin16