Parents have a right to be worried about their kids.

Parents don’t get enough credit. I mean I know that it isn’t really considered a job because you don’t get paid, but in my mind, it is a 24-hour job every day until they grow up enough to move out or take care of themselves. The worry that a parent has to go through, especially if they are first-time parents is insurmountable and so many families don’t want to leave their child even for one second so nothing goes wrong.

However, that is not possible since everyone needs a rest and someone to help can come in handy when times get rough. After all, even parents want to go on vacations once in a while, and bringing your toddler with you is not the easiest thing in the world though I am not saying it is impossible. That is why many families out there opt to hire a babysitter to take care of their children while they are away.

Usually, they do have some sort of precaution and parents will only leave their child with a person they fully trust but this is where these particular people made a mistake. You will soon see what I am talking about once you scroll below.

Right from the start, we can tell this person thought that they were in the right for putting up cameras. 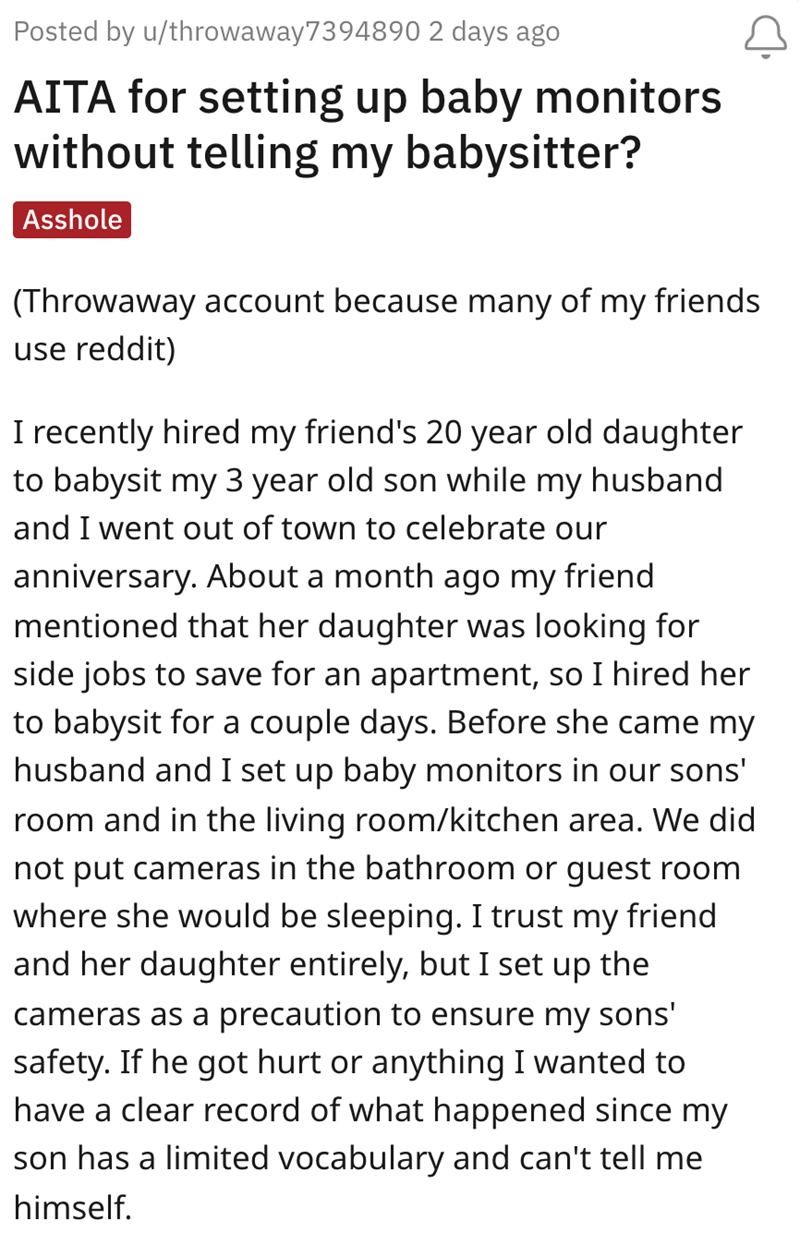 Unsurprisingly, the babysitter was not happy when she found out and neither was the friend of the family and I totally understand her reaction. 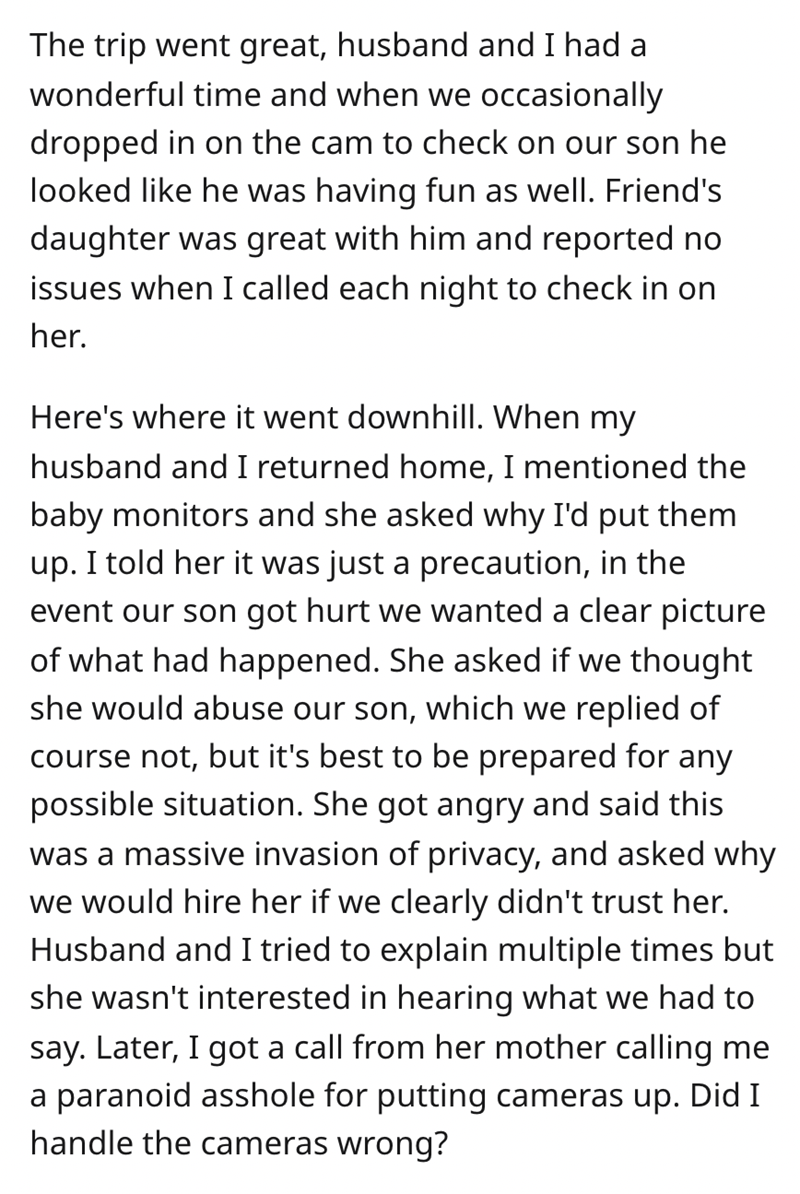 I don’t understand how these people thought that it was okay to record this young lady. Now, don’t get me wrong, there is nothing inherently weird about having cameras in your house especially if you want to keep an eye on your babysitter but people usually tell their babysitter about it to see if they’re comfortable with being watched. They don’t just creepily spy on the unaware person. And did they really not trust her enough? If so, why did they leave their child with her in the first place?

People in the comments were not on this person’s side either.

They called this person out for not warning the babysitter about the cameras. 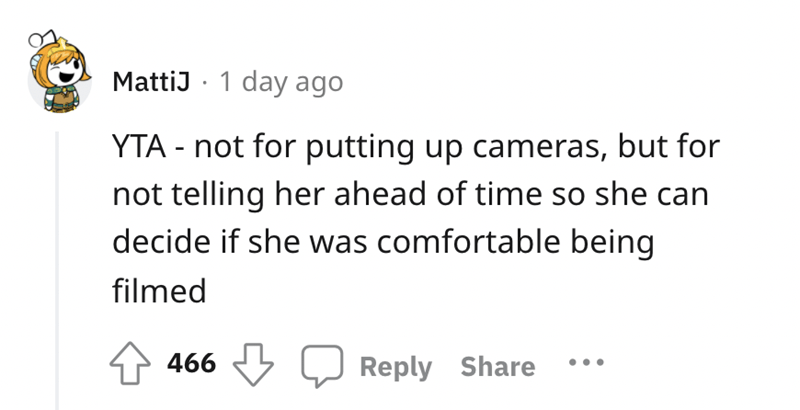 is it even legal to do this where they live? 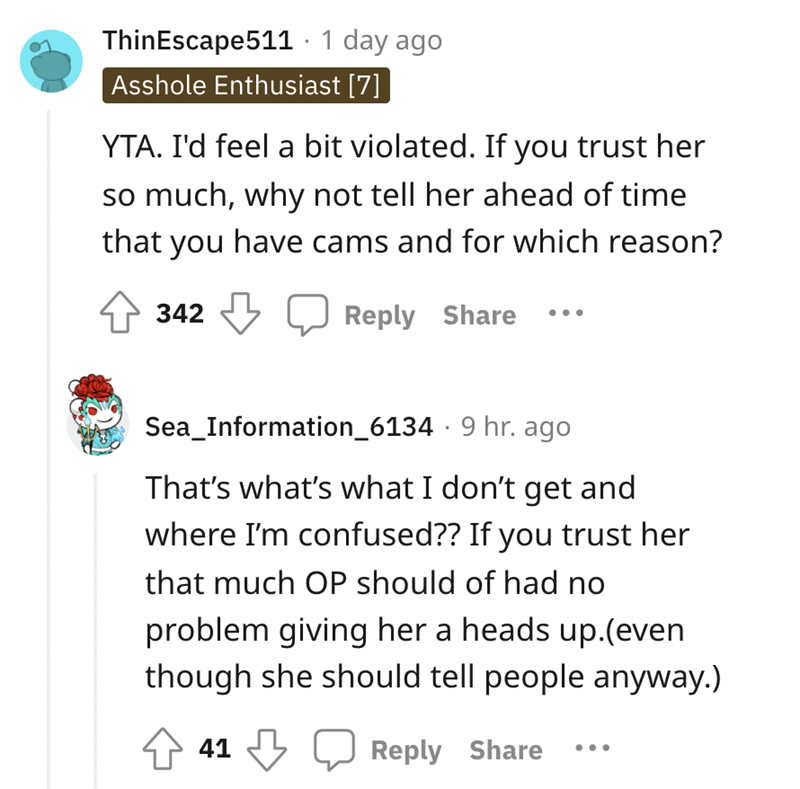 Don’t you need permission to record someone? That is why every company tells you that they have cameras watching you. 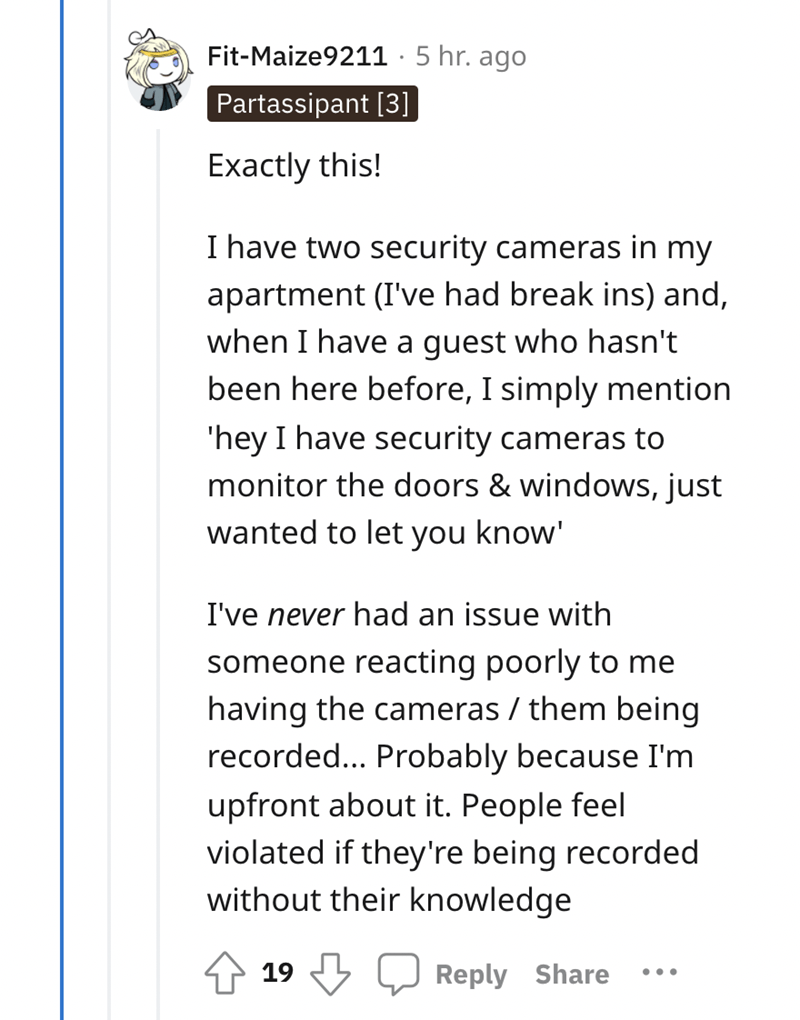 Would it really have been that big a deal to simply tell her the truth beforehand? 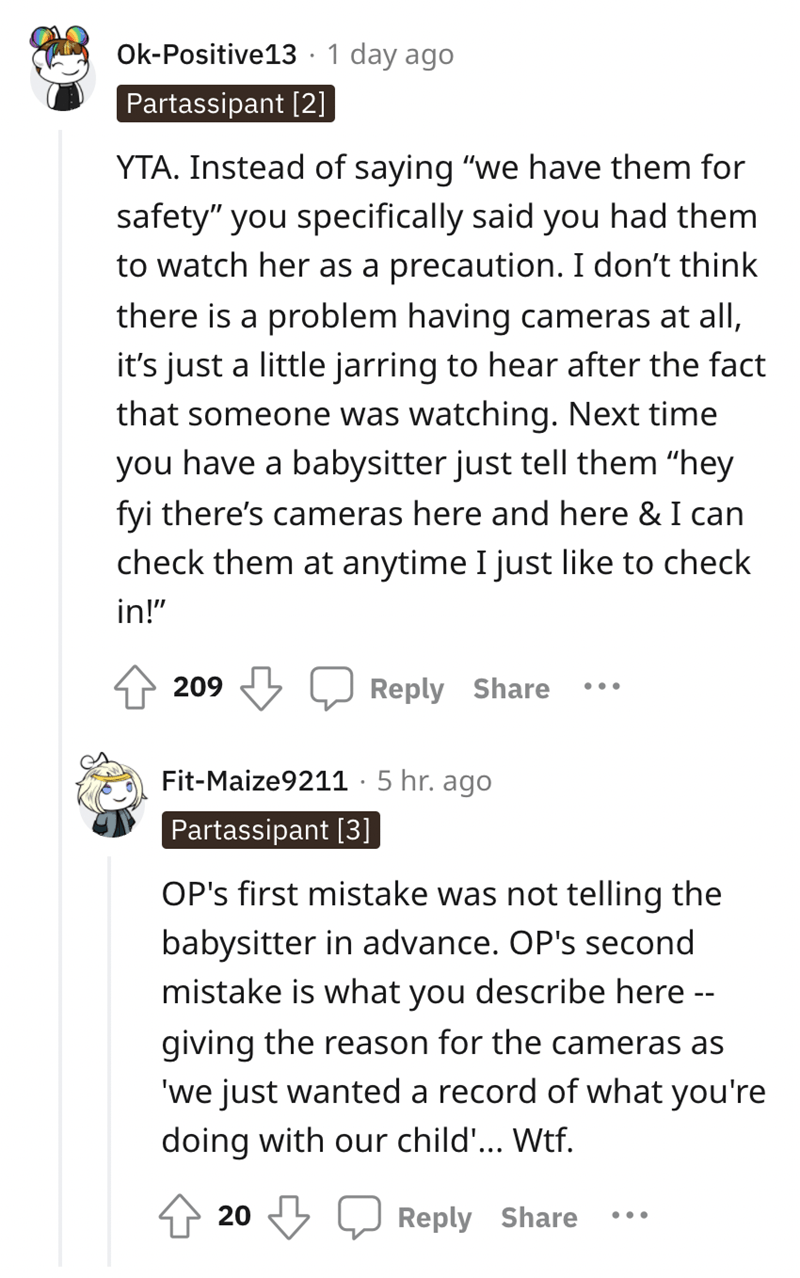 Then, she could have been able to make an informed decision without any regret from this person’s side. 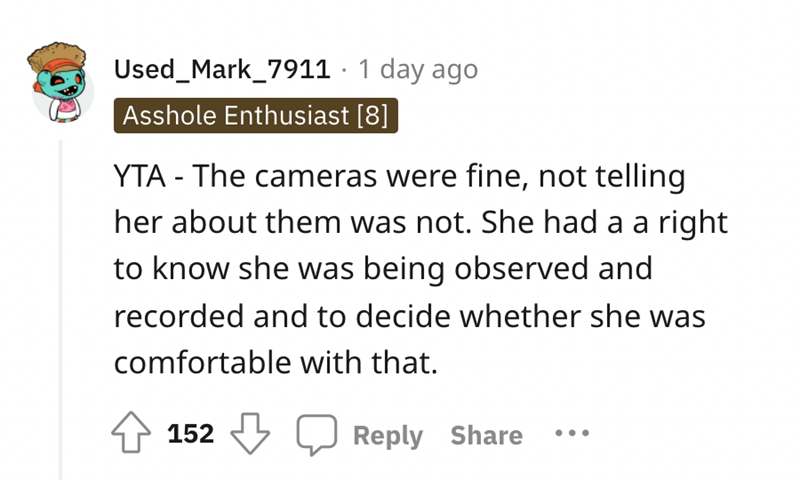 Even the poster later admits that they should have told her about the cameras and that it was a mistake not to do so. 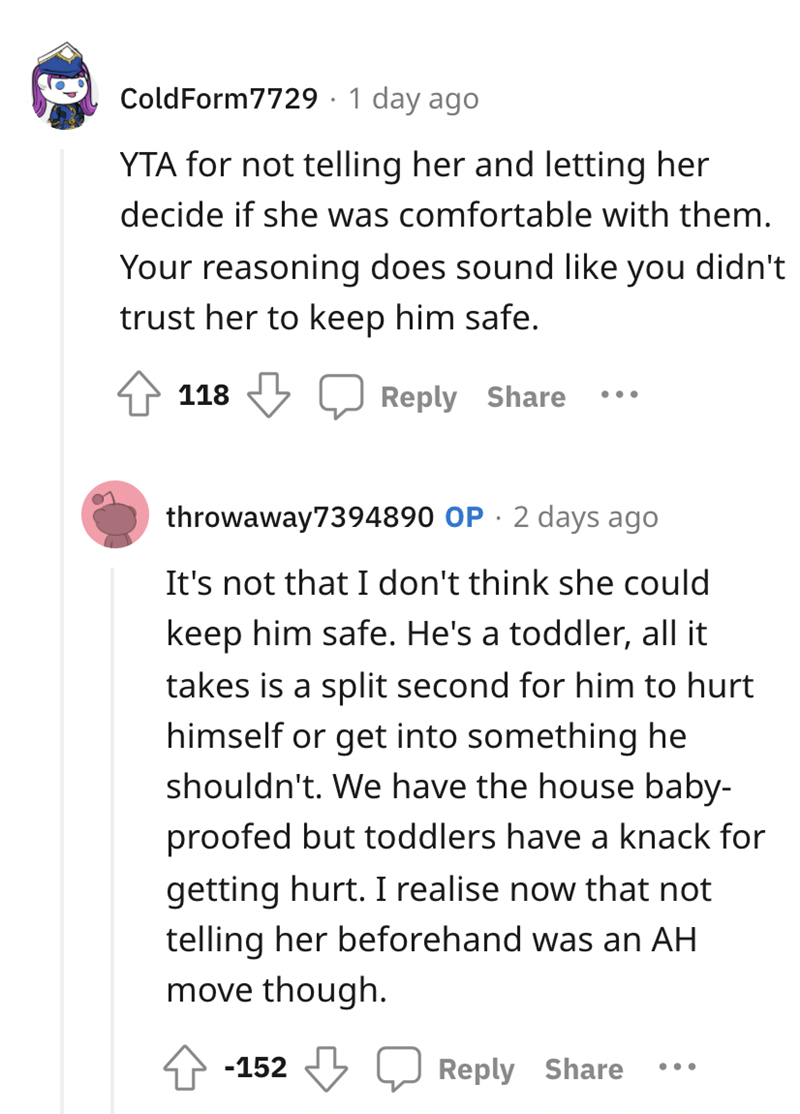 I mean, that would have been the decent thing to do but apparently, this person didn’t think so. 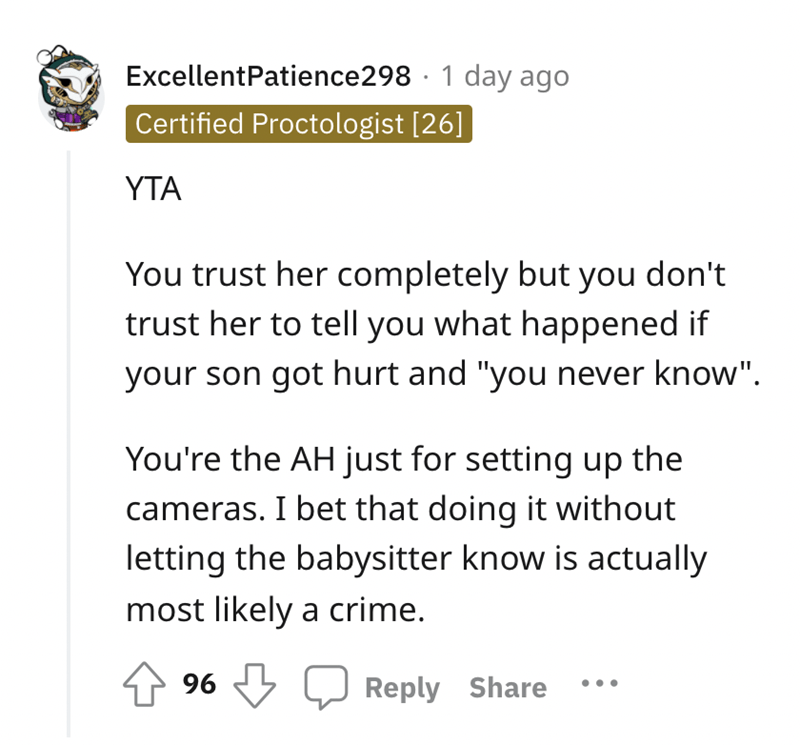 However, they still don’t get how inherently creepy all of this is and remain adamant about just being worried. 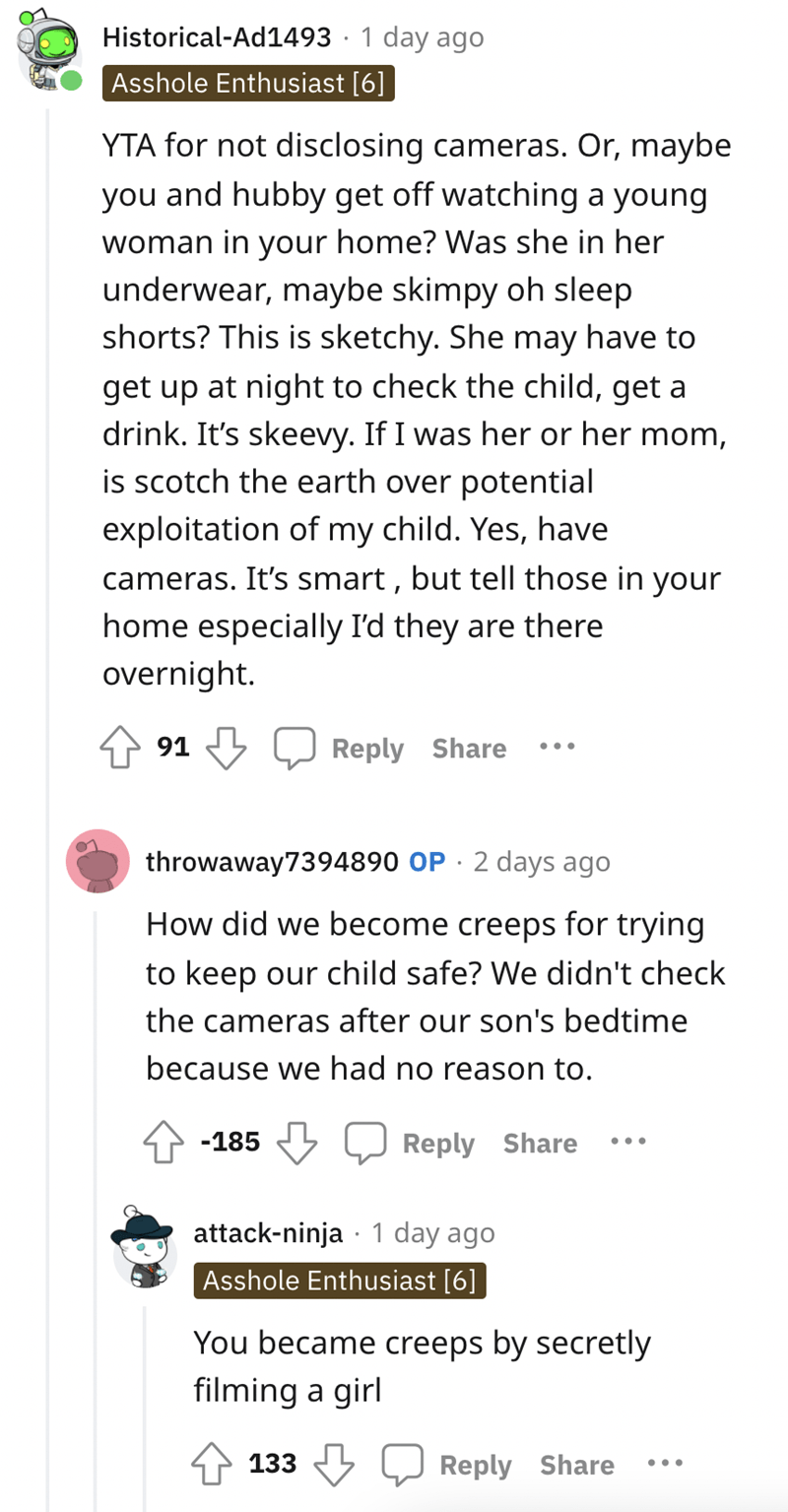 What are your thoughts on this whole scenario? Do you think it was okay to spy on the lady without telling her first? Or do you think the parents should have warned her about the cameras? What would you do in this situation? Would you have felt like your privacy was being invaded? Comment down below and let us know.