At some point in our lives, we all suffer from some sort of medical condition that we don’t feel like telling everyone about. We rather keep them very personal and private. Others are supposed to respect our privacy and not make try to butt into our personal matters. After all, it is against the social etiquette to force others to tell you the things they want to keep private. The privacy of a person should be respected under any circumstances. No one has the right to violate it.Unfortunately, not everyone has a good understanding of personal space and privacy. Some people are simply nosy and like to poke their noses into everyone’s affairs. They just want to know everything and what are others doing in their lives. It’s not that they are genuinely concerned, but they just want to know what is happening in everyone’s life. The detective in them is not giving them a break and they want to keep records of everything.

Nosy people are not just annoying, but they get judgmental as well. They would listen to the whole story and pass their remarks. Often times, they spread the new with a plot twist and nothing is more infuriating than that. However, there are some ways in which we can shut such nosy people up for good. We just have to be super witty and precise about the matter. We came across a Reddit post that addresses these issues. So the OP was going a medical procedure that she didn’t want to be very open about, as it was something very personal. Some of her colleagues and friends were being super nosy and trying to get all the details. So OP came up with an epigrammatic idea fro make all these nosy people feel rather awkward about asking so. Scroll down to read what happened exactly.

Some people are nosy. 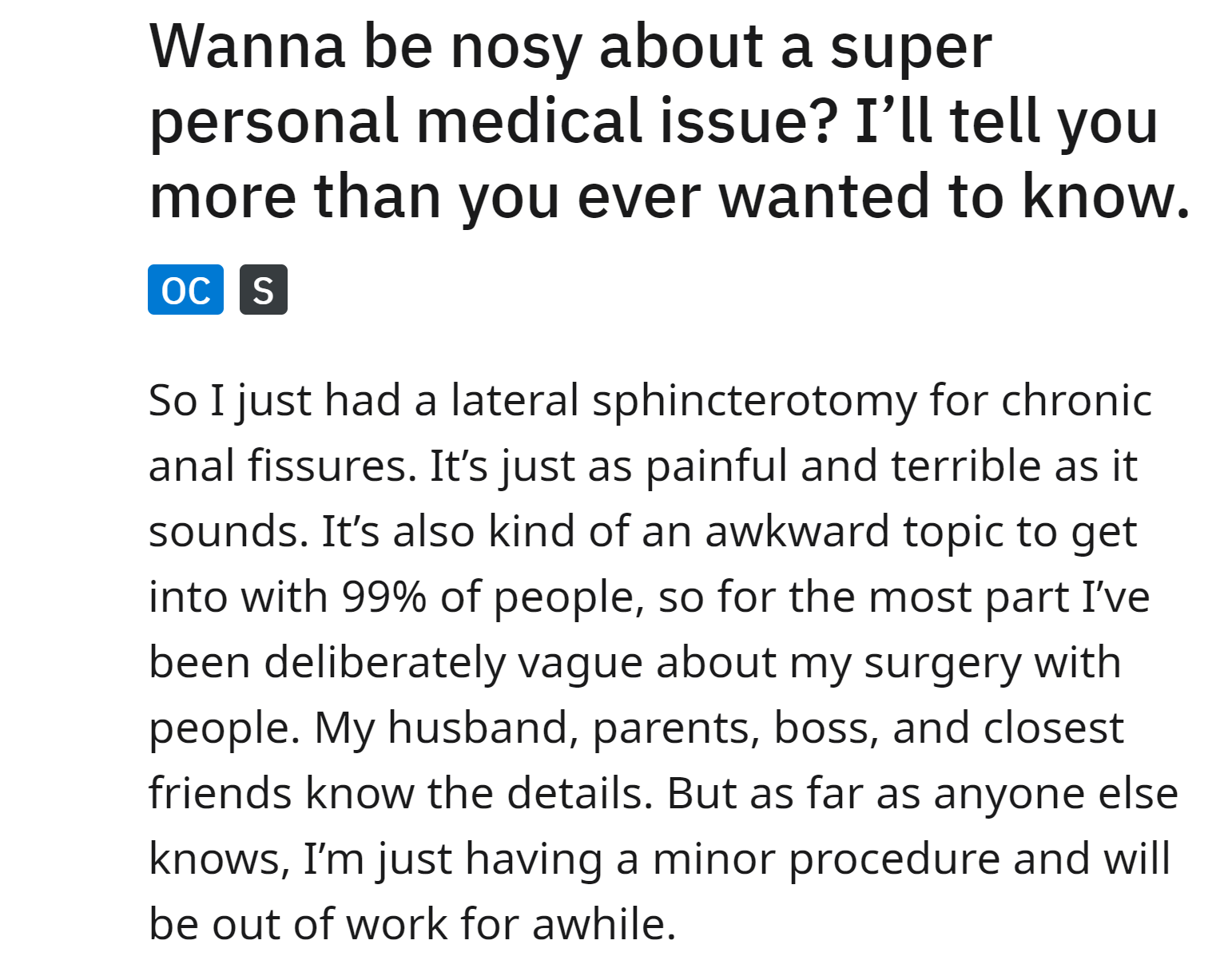 OP gives them some graphic details.

This is how the conversation normally goes. 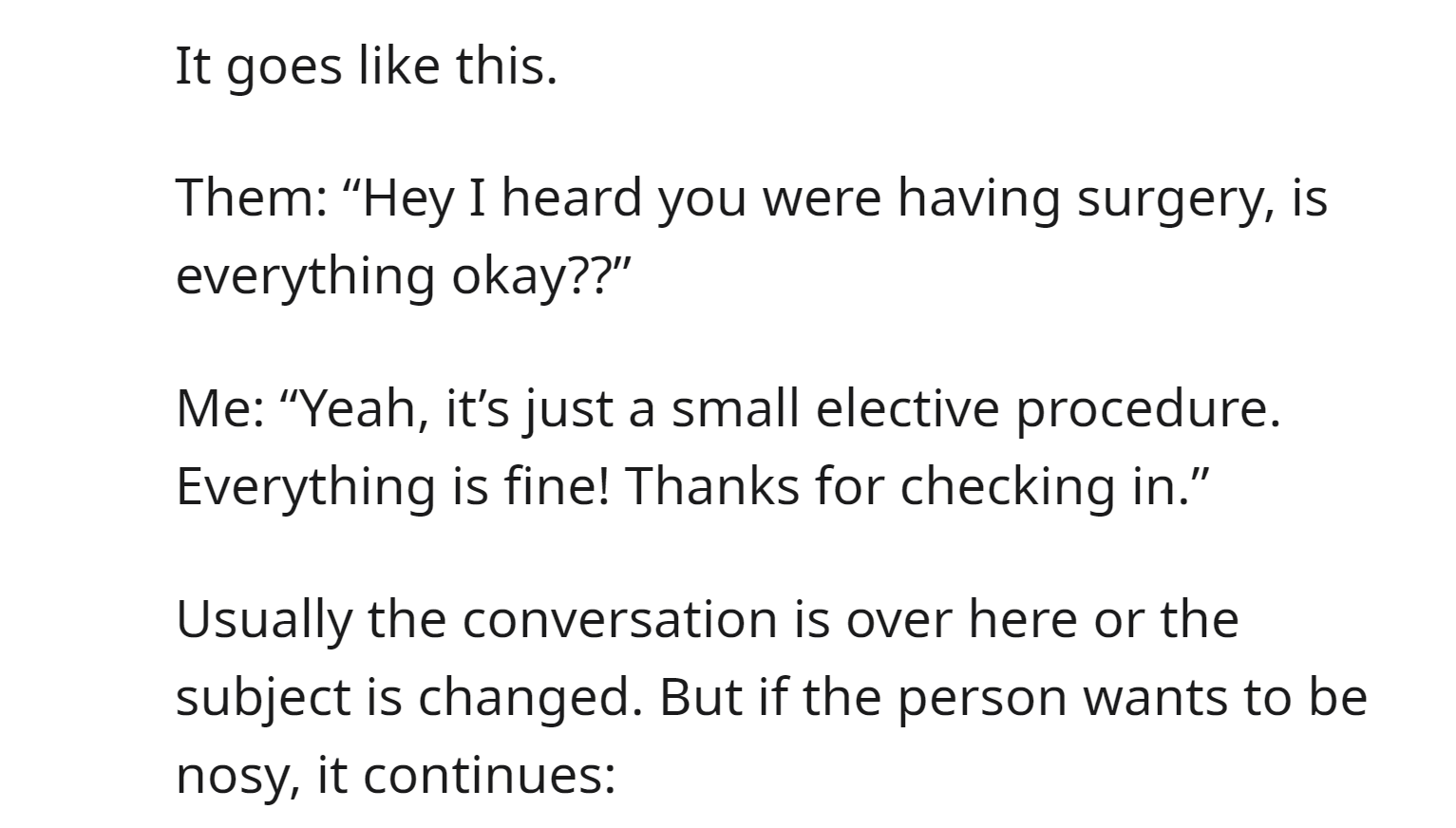 And this is a conversation with a nosy person. 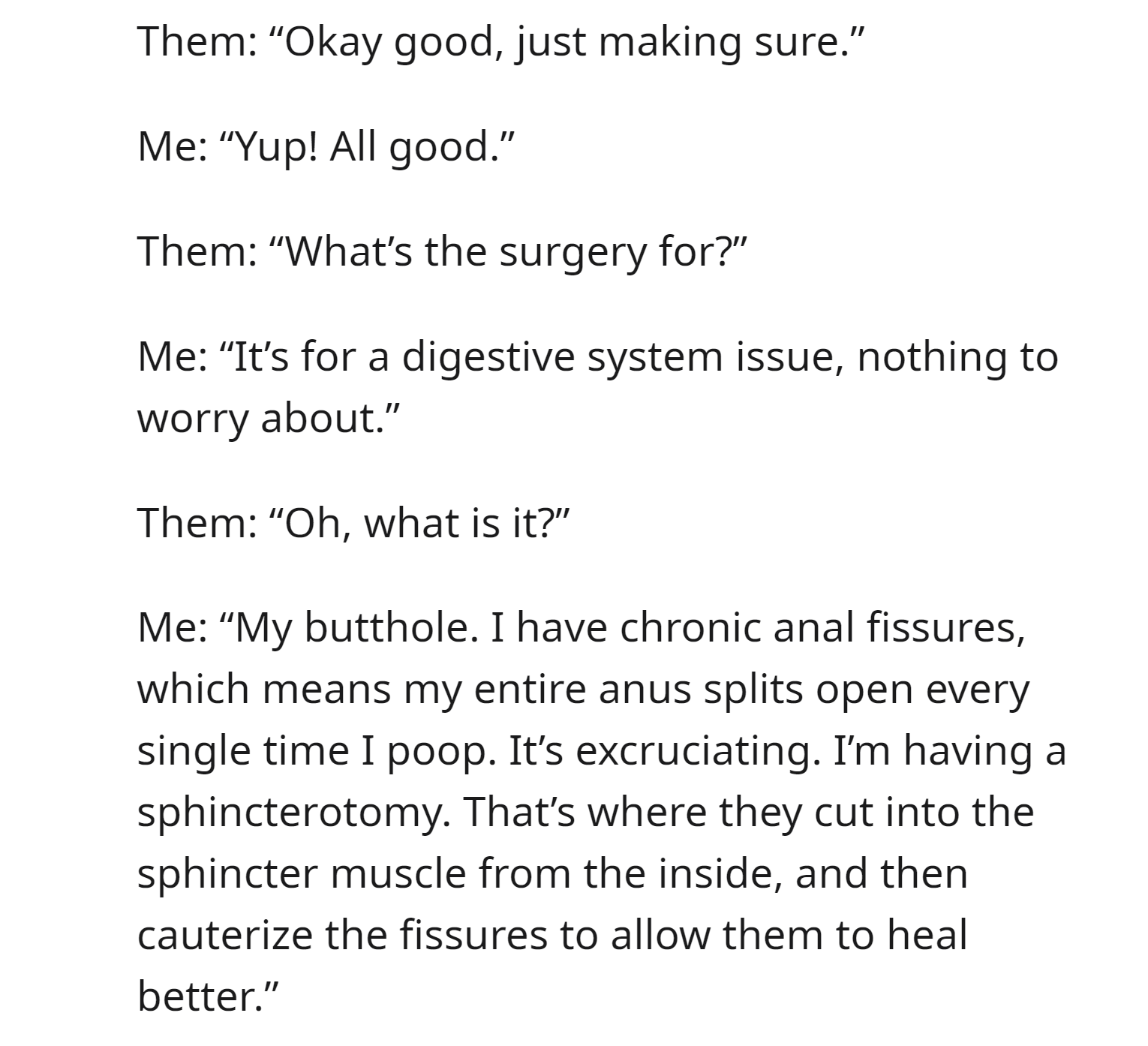 Now the nosy ones feel awkward. 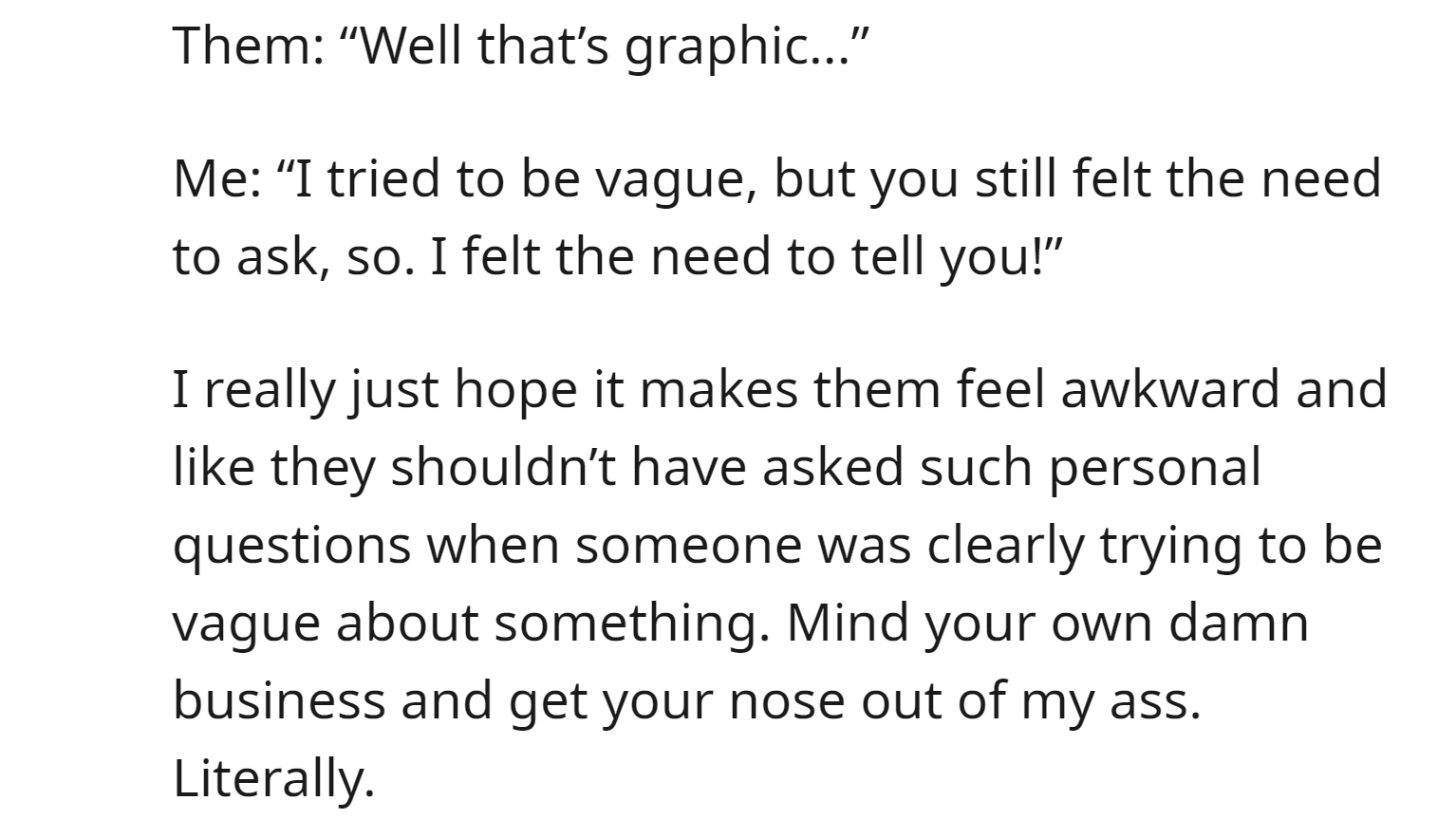 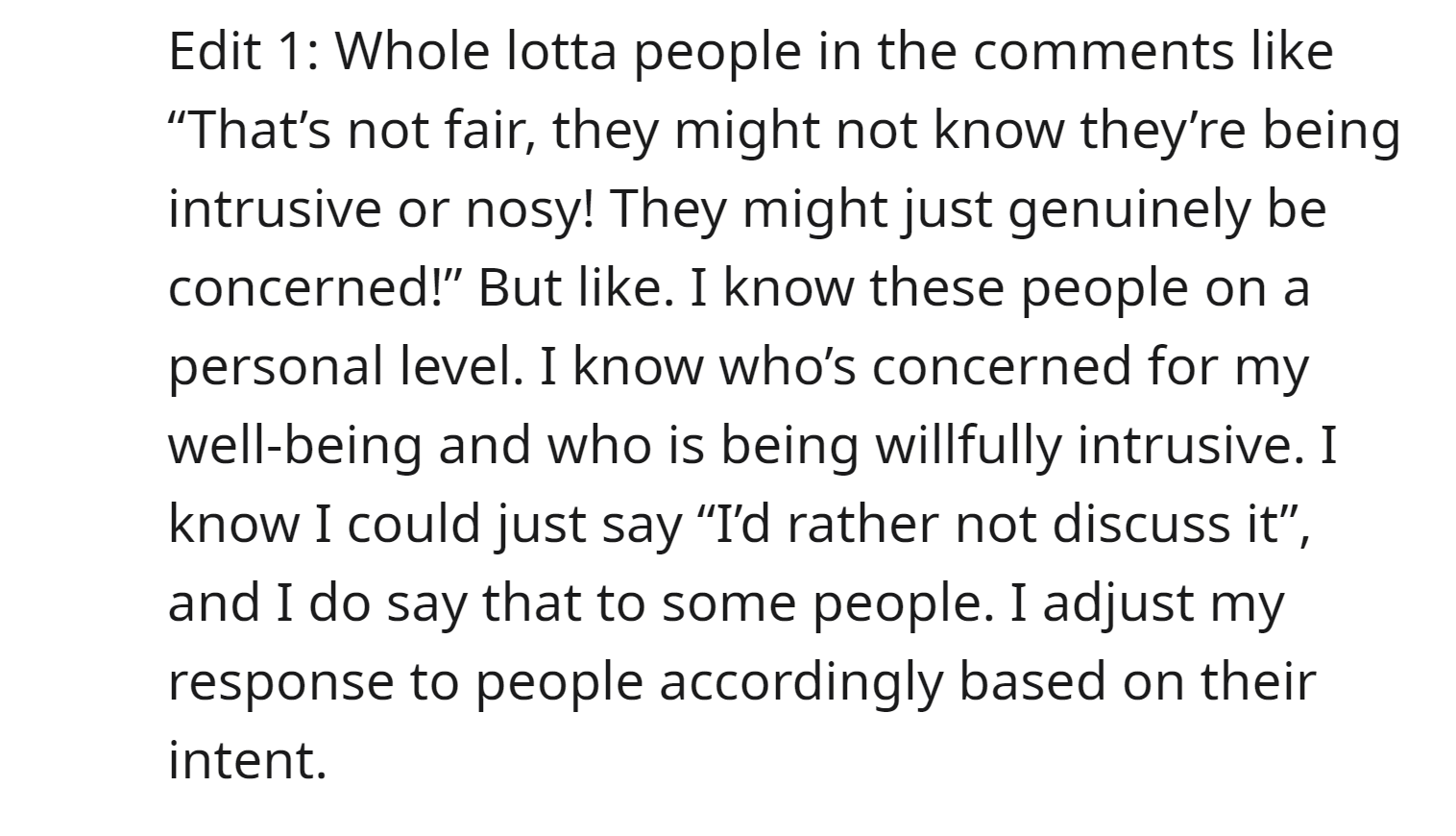 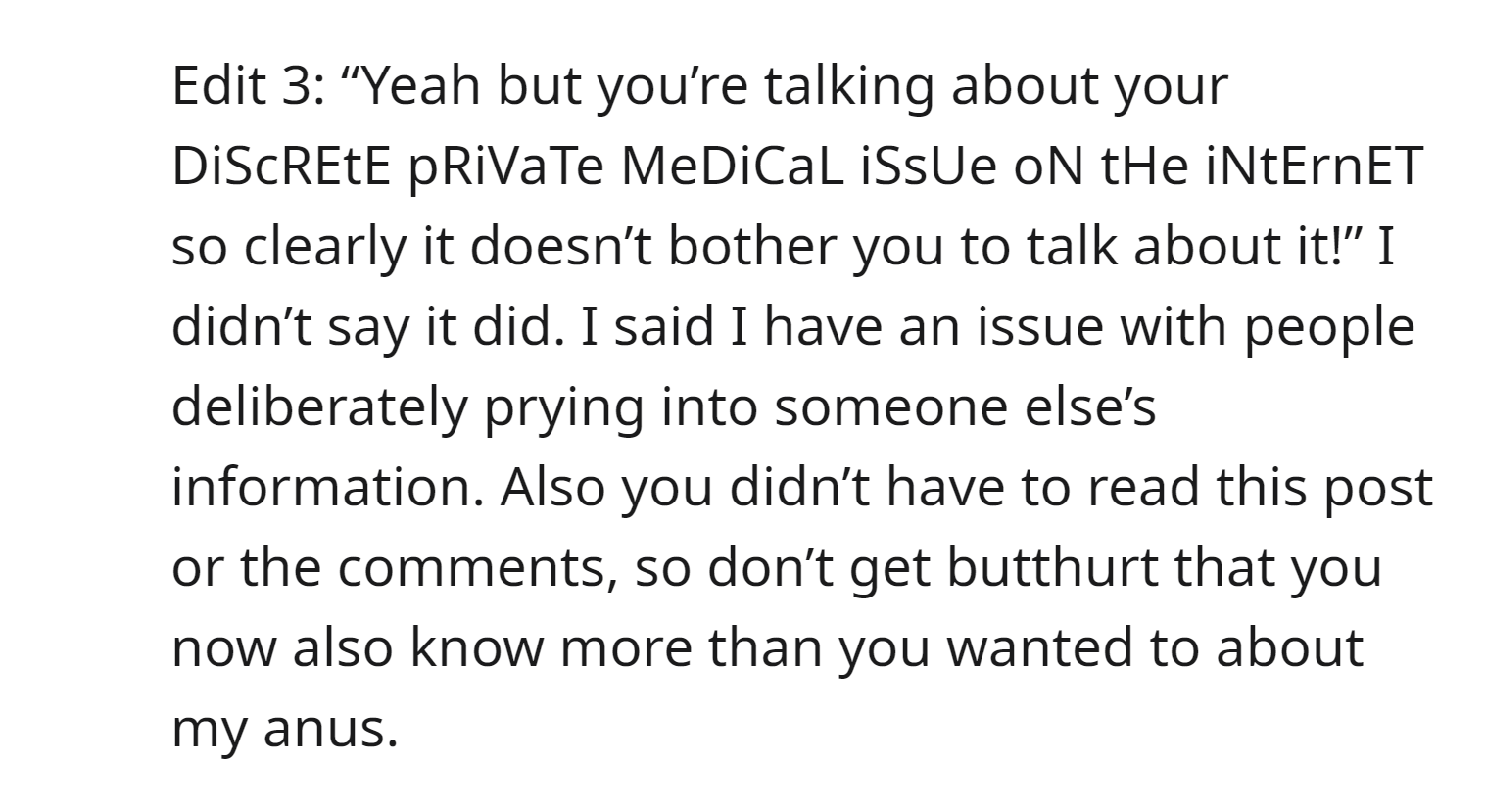 It is solely the OP’s own decision if she wants to tell others about her condition and how much she wants to share. No one has the right to force her to tell them everything when she is clearly being vague about the whole thing. This is extremely unethical. People really need to learn to mind their own business. If someone really wants to wish well for someone, they can simply send in good thoughts and prayers, even without knowing the whole situation. The OP simply does not want to share the details regarding her procedure, as they are highly personal and private. No one wants to discuss their a*shole problems with people, especially those that are not very close. However, OP nailed it, by making them regret asking all those personal questions. It is a great strategy to make others feel awkward for asking awkward questions. After reading this story a lot of Redditors agreed with OP and said they have been going through the same. Scroll down to read what Redditors said.

Sometimes the HR can be pretty nosy too. 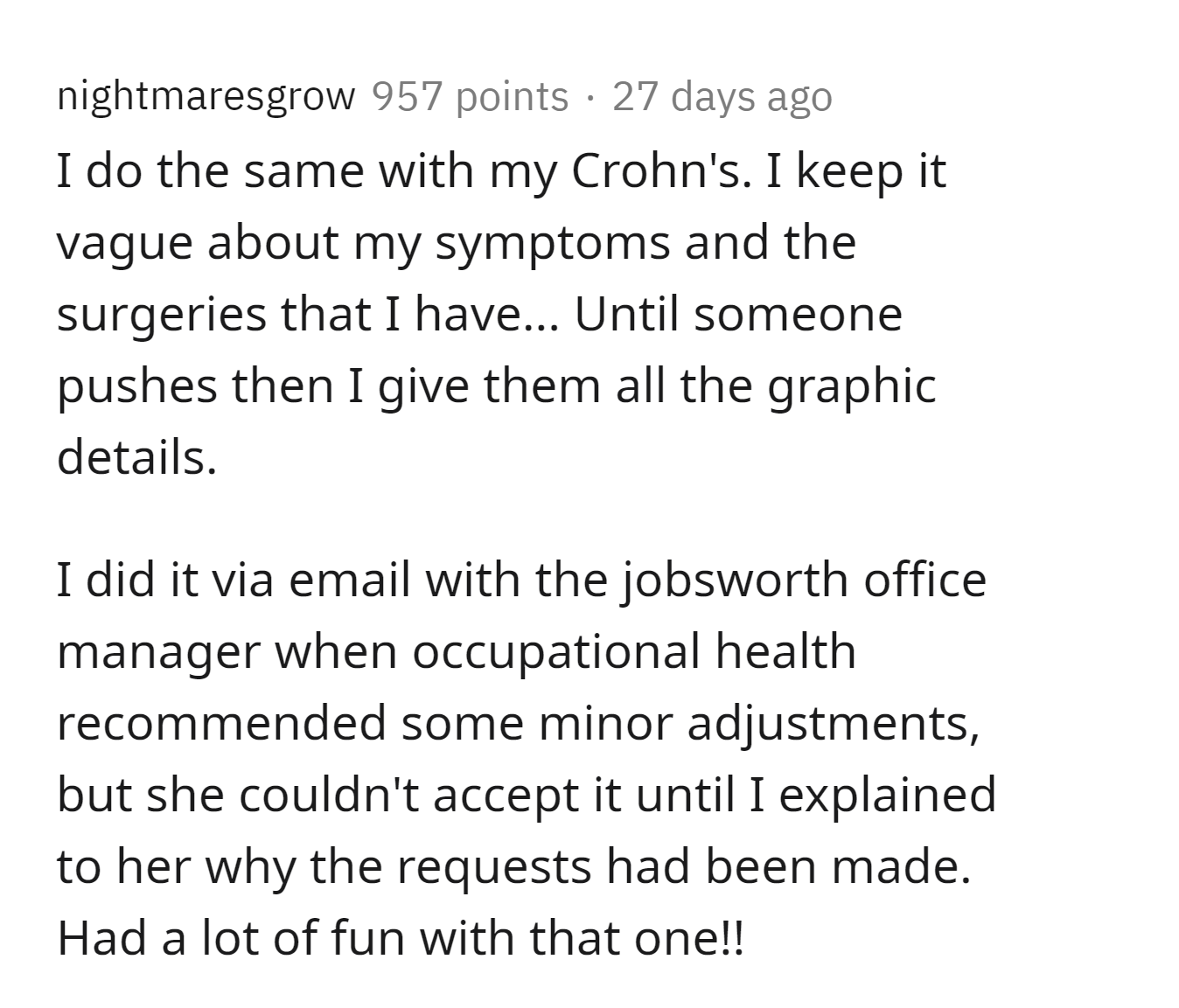 They want to dive into all the details.

They just want to get a little weird. 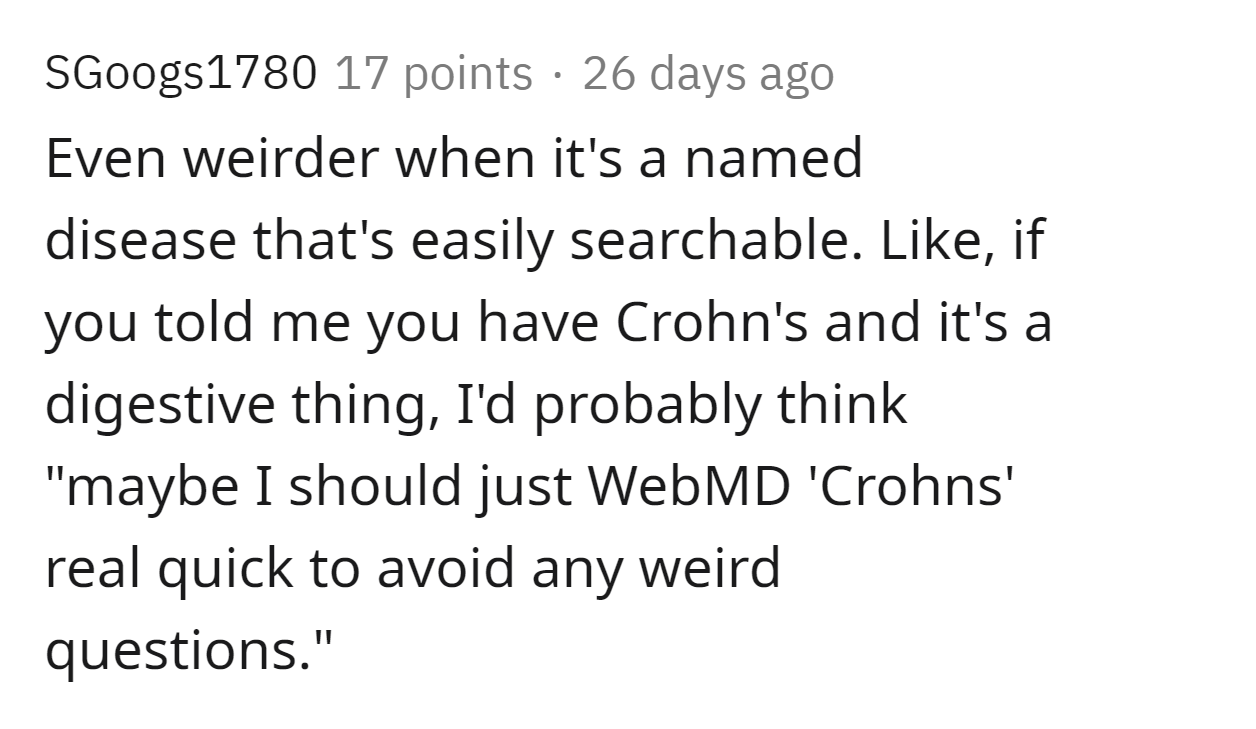 This one is hilarious. 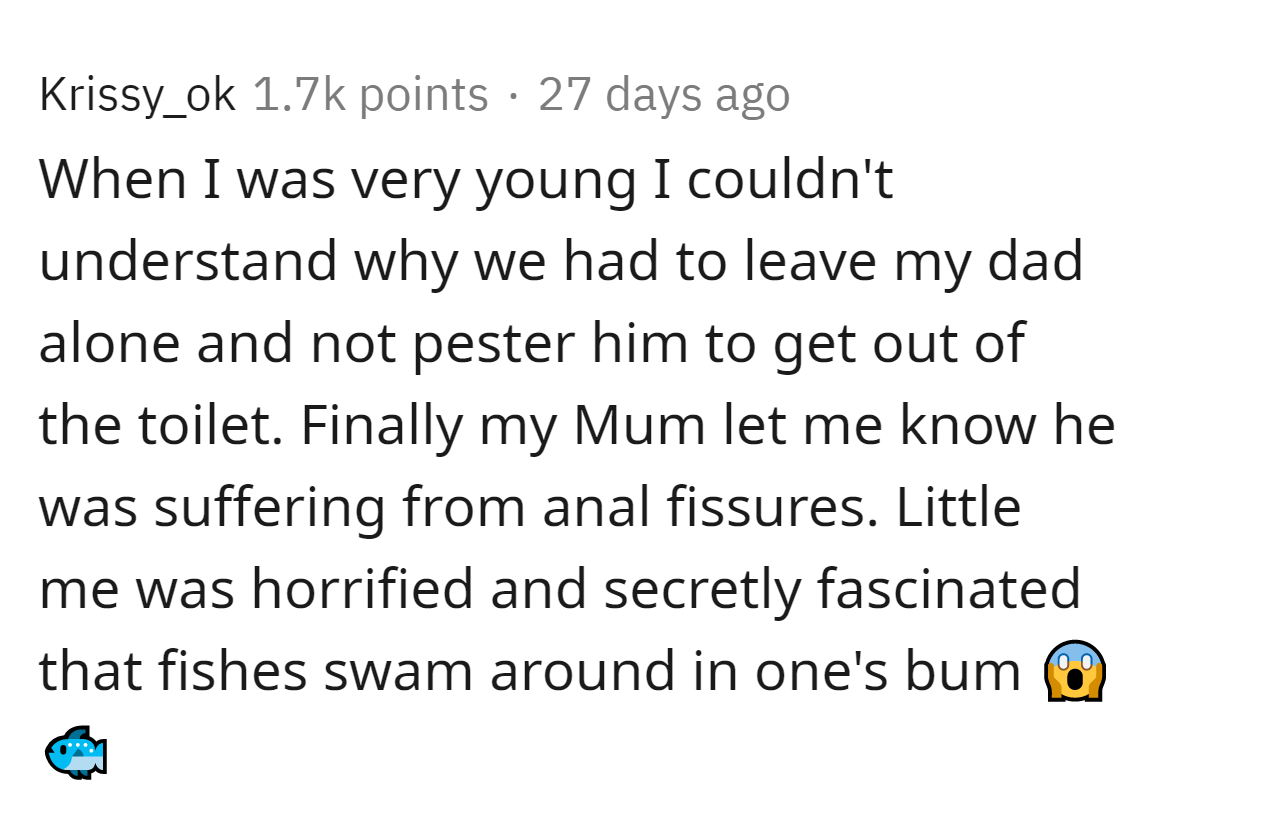 This one is sending some good vibes.

This a serious issue that really needed to be addressed. People really need to stop digging into the wrong places and start considering the privacy of others. Everyone has a right to protect their secrets and no one has the right to exploit them. These are some of the basic manners that some people lack and should really care about. What do you guys think? Let us know in the comments below.