Poor poodle spent got rescued after spending months under a house all by itself.

Poodle! One of the cutest breeds of dogs out there. They are well known for their faithfulness, their instincts. They are very intelligent and are easily trainable as they grab everything taught to them real quick. A poodle is a very sensitive dog and is a sensitive dog who deserves all the attention in the world. And he deserves a place among the best in the world.

This one poor poodle got stuck in a situation that was entirely undeserved and unfair to the doggo. The doggo got stuck underneath a house. Despite the locals trying to help her out, it chose not to listen or even try to come out. One person said that the dog had been there for at least 5 to 6 months.

If you think about it, an average poodle lives for about 12 to 15 years, and this poor guy spends half a year under a house all by itself. We can’t even image what he would have went through.

As soon as the news reached Hope For Paws, a rescue company, they were quick to capitalize on the situation and they rushed to this house located in Los Angeles, California with only one hope: To rescue this poodle out of there.

The founder of Paws for Life, Eldad, and his co-worker Lisa took it upon themselves to rescue the poodle. 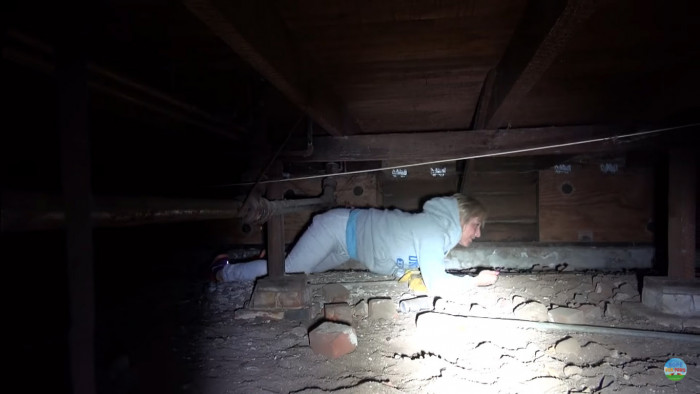 They finally found the poodle after passing through a bit of rubble and a lot of dirt, the poor guy was sitting in a corner, shivering and terrified of the strangers and a flashlight that was coming closer and closer. Remember, he is a very alert and instinctive dog, And according to Eldad and Lisa, the poodle felt very insecure as the rescuers tried to approach him and it tried to bite them in the process as well.

Looking at its condition, it seems as though it required immediate medical attention. 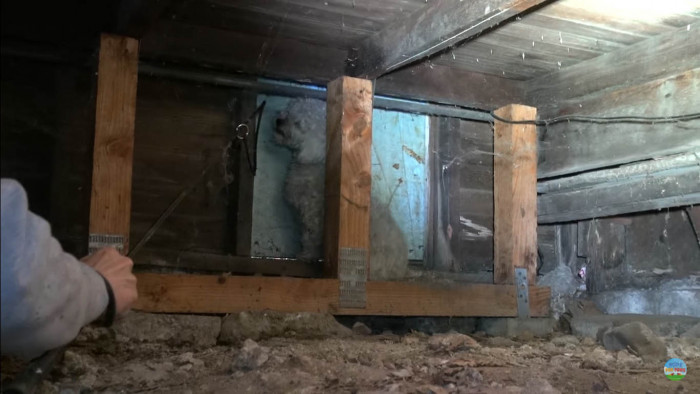 The dog was in no mood to surrender but neither was Eldad Hagar. He had been in this animal rescuing business for over 8 years. He had just the skills required to successfully conduct this rescue mission. It needed a lot of patience which was no problem to Eldad and the co-worker Lisa Chiarelli fully supported Eldad. The rescuers needed nothing but a healthy life for the poor poodle.

After being very patient for hours, the doggo finally connected with Eldad and realized that the two are actually here to help him out. He probably knew this isn’t the place for him.

But Eldad and Lisa kept the patience going and did not rush the situation at all. When the poodle was in their reach, they took their time to get familiar with it. This poor poodle probably got its first petting after half a year. Aww!

Once the dog was comfortable around the two, they decided to finally take him out of this dirt hole and change his life for the greater good 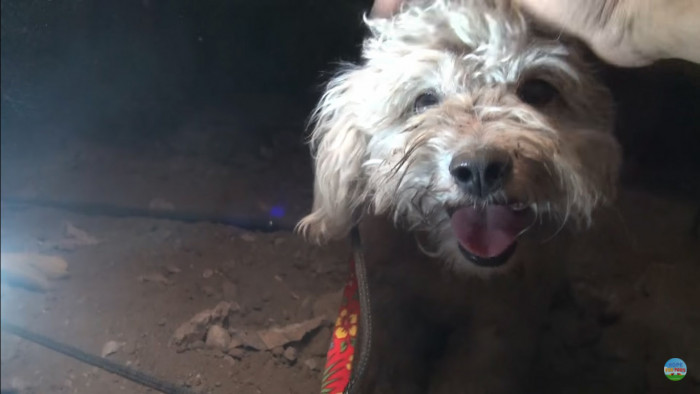 It’s the right choice little doggo. Come on, let’s make it out of here. 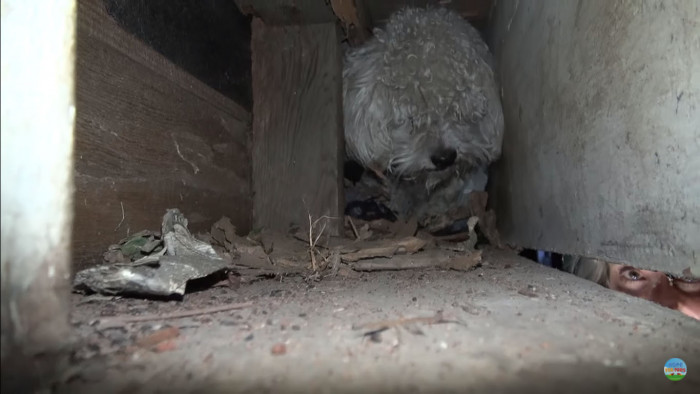 The poodle was given all the medical care needed and it recovered to its 100% real quick. He was given the name Scotty. This is truly adorable. Scotty never deserved to be where he was. He deserved to be near people like Eldad and people who are willing to give unconditional love and endless affection to the dog.

And so it happened. Hope for Paws put Scotty up for adoption and soon it found the family it was always supposed to have.

We are pretty confident that such rescue missions made the rescue company very attached to these animals. The acceptance Scotty gave to Eldad when it chose to finally come out of the corner and into his hands, is what creates such type of connections it really must have been tough for him to give these cute pet animals away to their new owners. But knowing, that it is all for their own good, necessary steps are taken for a fruitful life for Scotty.

A beautiful moment between Scotty and his owner was captured by In Joy Photography and is now a perfect memory for everyone to always look back at.

Check out this beautiful picture of brave poodle Scotty in the arms of her new owner. 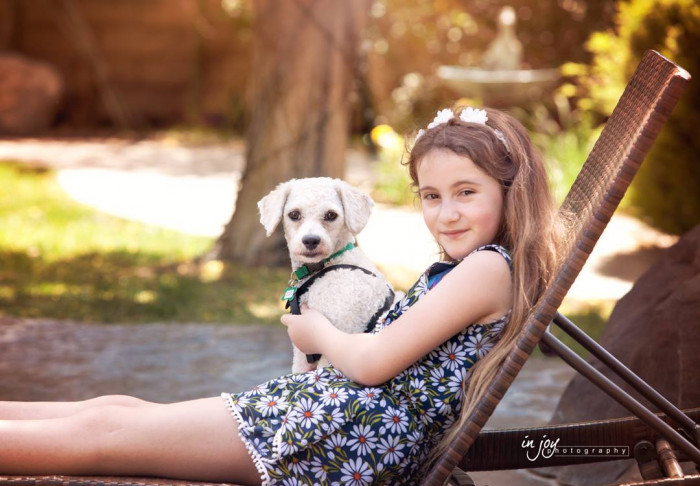 Scotty soon made a lot of new friends in the neighborhood as well as in the new family. He happily plays with them all and never likes to stop. What a cute doggo. 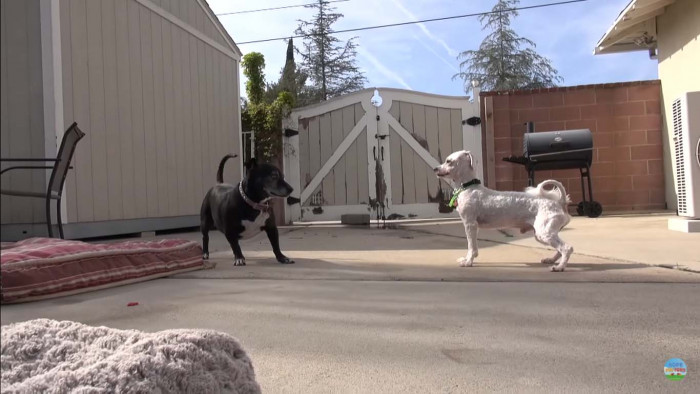 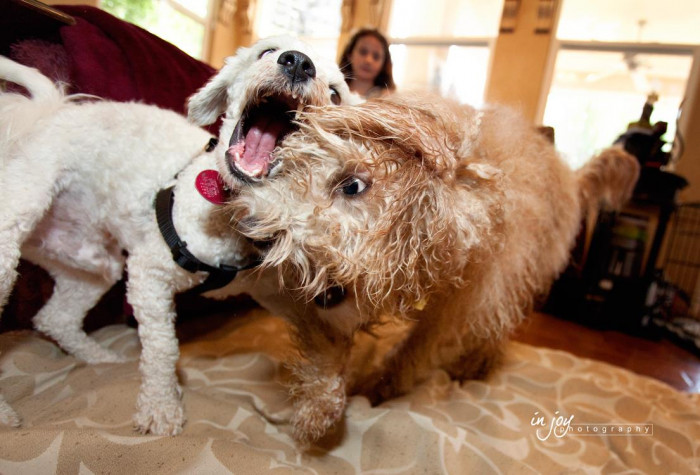 Eldad chose to record this entire rescue mission on his camera, and he posted it on their rescue company’s YouTube page. There are many other interesting cases shared on there as well. When the company was asked as to why do they post these videos on the internet, their website responded as follows:

“A friend of Eldad’s mentioned one day: “If I didn’t personally know you, I would have never believed the stories you’re always sharing with me.” She continued to say “Why don’t you take a camera with you, and show me…..take me with you on a rescue journey.” YouTube was a fairly new platform and the first video uploaded by Hope for Paws was seen 14 times (10 of the views were from Eldad’s Mom). The channel has grown significantly since the first video in 2009, and as of today, Hope for Paws has almost 4 million subscribers and over 1,000,000,000 views!”

It was this upload of the rescue mission of Scotty which result in him finding the perfect family for himself. And we believe, Eldad and his team should be fully credit for the efforts they made to turn this cute poodle’s life around.

We really hope you enjoyed reading through this rescue mission. Let us know your thoughts in the comment section below and feel free to share your stories.

It’s a great cause what Eldad and Lisa did that way and we are sure, wherever Scotty goes, he won’t ever forget Papa Eldad and Mama Lisa. Stay blessed doggo and do wonders!