Cheating is never a good start for a relationship.

If someone is cheating on their significant other with you, then how can you be sure they wouldn’t do the same with you? I mean statistically, people who cheat once are more likely to cheat in their future relationships as well. I am not saying a person can’t change but how can someone think they are the exception to that rule? And that someone else’s partner won’t hurt them when they are together?

I suppose that is what the other woman named Claire is afraid of. You see this guy cheated on his girlfriend with Claire and then broke up with his partner. Surprisingly enough he married Claire soon enough and they moved into the house he was supposed to move in with his previous girlfriend. I know this sounds confusing but everything will become clear once you scroll on below and take a look for yourself.

At least she found out her boyfriend was cheating before they moved in together.

She honestly doesn’t have to care that he still lives there. She did nothing wrong. 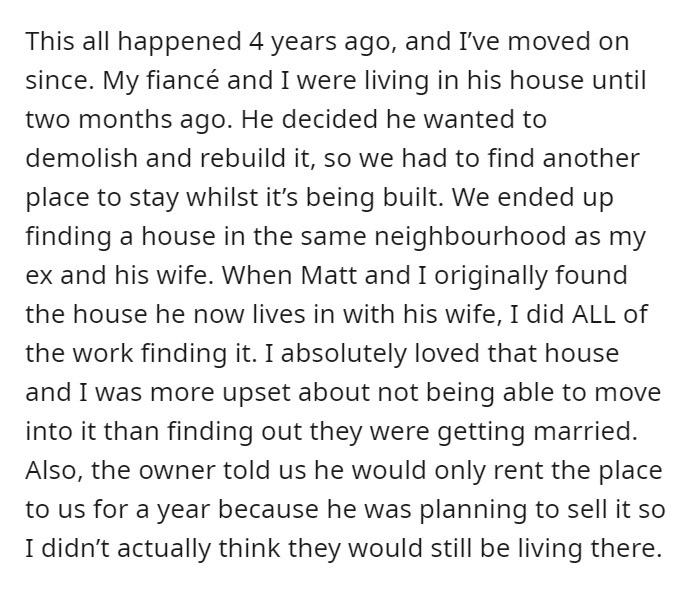 But it soon became clear that Matt was not over her and Claire knew that. 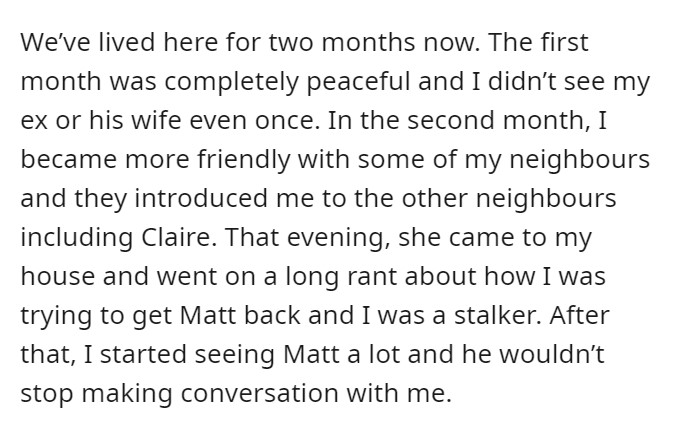 It is not her fault that he keeps talking to her. Clearly, their marriage was not that great, to begin with.

Also, it’s the next level of enitlement that Claire expects OP to care if her relationship with Matt is damaged when she’s the one that broke up their engagement but having an affair with him? Really? OP is supposed to move to make their marriage better but Claire couldn’t even bother not to have s*x with the guy OP was engaged to? You owe her nothing. –TheHatOnTheCat

Matt is just trying to rekindle something that doesn’t exist anymore and Claire should have seen this coming. 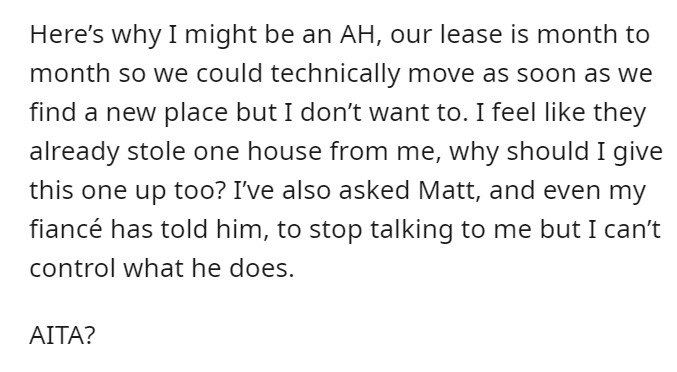 What is she supposed to do? Move away because of him? 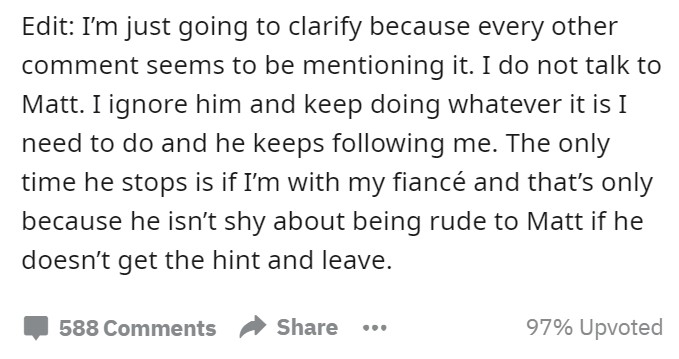 Claire can scream all she wants but she should have to move. 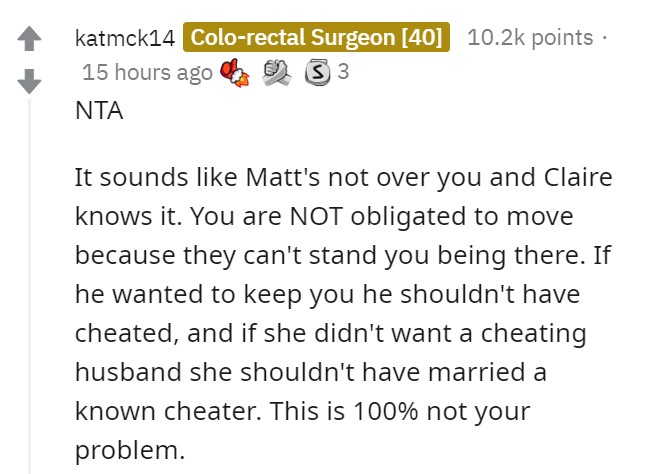 I think the thing to tell Claire is that you don’t want him. You will never want him. You don’t trust him and don’t respect him and you are relieved you found out his true personality before you ended up married to him. Tell her it is a huge relief to not be with him and that you’ve found a man you can trust and respect.

If you feel like being mean to her you understand why she doesn’t trust him. You don’t trust him either but luckily you didn’t marry him. –HambdenRose 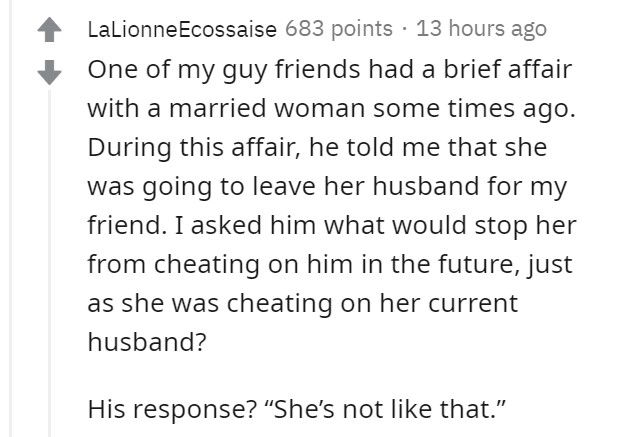 And if they do it once, they are probably going to do it again.

She dodged a huge bullet with that one. 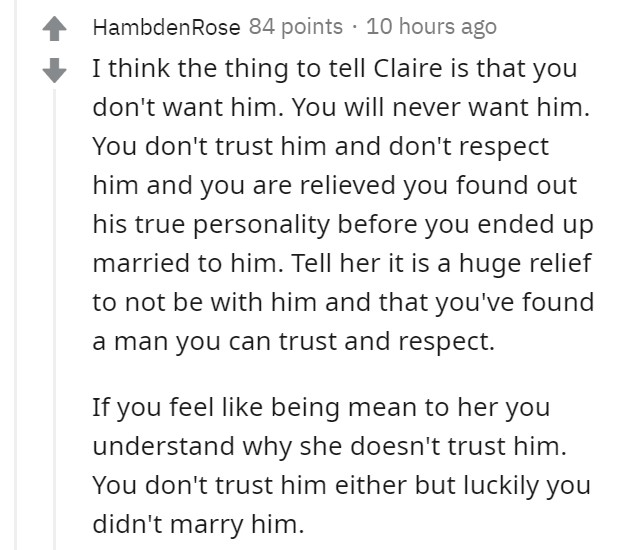 That might be just a little bit too much for the new fiance to handle but I would love to see Claire’s fuming expression. 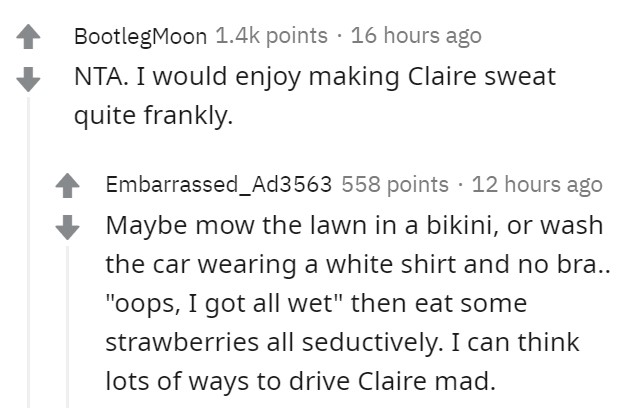 He knows what he is doing and you don’t want to get stuck in the middle of their feud. 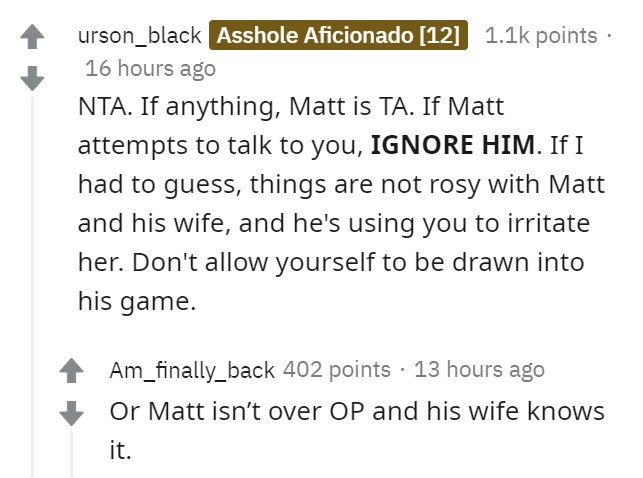