Financial decisions shouldn’t be made before the go ahead from both of the partners.

I get that one person’s money is essentially household money, and you should be a team. However, big financial decisions should not be made before talking thoroughly to your partner. This woman however does not think that. You see, she bought a motorcycle for her biological son on Christmas when her husband had told her beforehand that they did not have the money to do that. Rather than listening to him, she dipped into his savings and got it anyway.

To make matters even worse the savings was for her step-son’s wedding which the father had promised him. Not only did she make him break a promise, but she also doesn’t feel like what she did was wrong and tells him she won’t return the bike. After all, ‘does he really want to break his step-son’s spirit?’ She is clearly manipulating him, so she doesn’t force her to return it. You can take a look at the whole story by scrolling below.

Honestly, I can feel this on a deeper level because I went through a very similar thing myself. 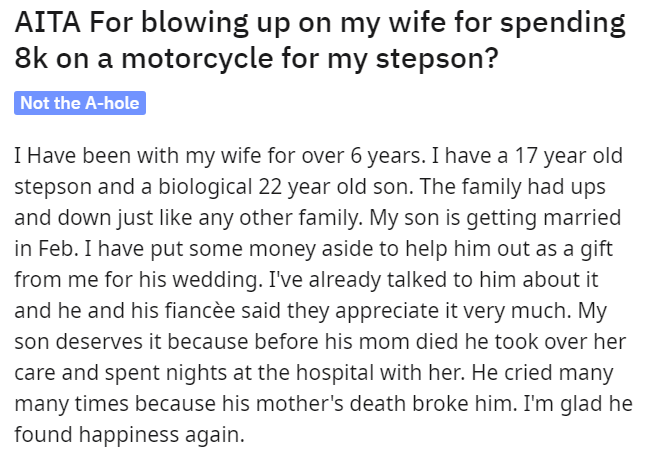 So I am glad that the father cares so much about his son. 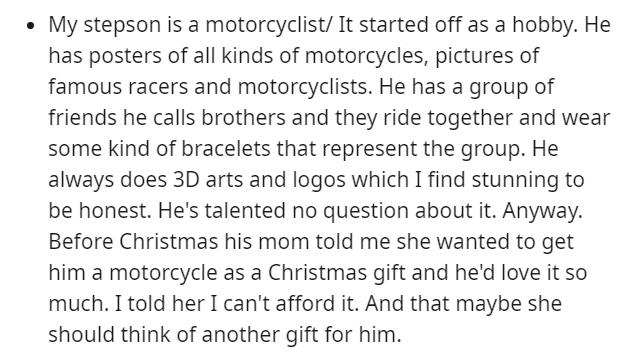 However, things quickly took a turn when Christmas arrived.

The wife’s son is clearly not responsible enough to even own one bike let alone three. 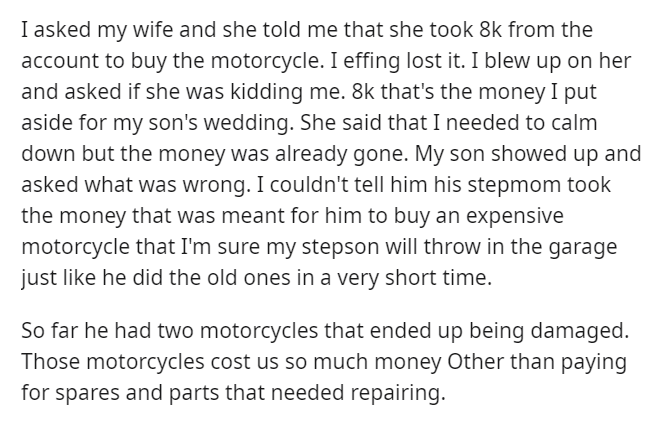 He has no right to resent you. The person he should resent is his own mother. 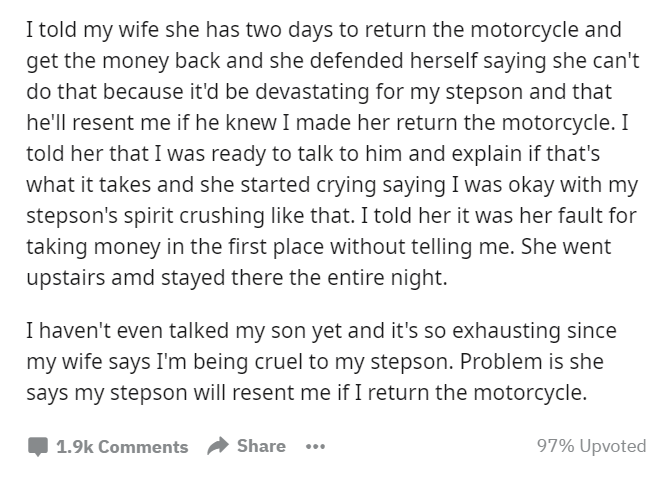 Info: when you decided to give your son this money, how did you discuss it with your wife?

This is the slight, quibbling, secondary issue which should be mentioned.

If you’re married, the sole earner, and pushing the “all major financial decisions must be made together” as a big part of why this was a violation… But you had just decided to start siphoning off a large amount of cash from your shared expenses to give to your son without consulting your wife, I could see her being upset about that and this being a reaction/ lashing out in retaliation.

Ideally, you would have said, “hey, I want to help the oldest out with his wedding. If we reduce this, we can give him xxxx amount by the time if the wedding. Are you cool with that? We’ll do the same for the youngest when he gets married.” And she would have said “okay, sounds good” or “uh, no, because ___”

If you unilaterally decided to give your kid a chunk of cash because he “deserves it”, without her involvement, that’s not a good thing. It’s the same as her taking that shared money and giving it to her kid over yours, because she felt he deserved it. The only way it would have been OK without talking with her is if it were coming out of your “fun money” personal allocation, which she would have no say over any ways, or if you had 100% separate finances, which does not seem to be the case.

If she agreed to giving the eldest help with his wedding, and then still went ahead and emptied the account, I’d be worried this was a red flag for a brain tumour or something, because that would be bizarre. –okay_sure_yeah

She knew that the savings were for the sons wedding, but she didn’t care anyway. 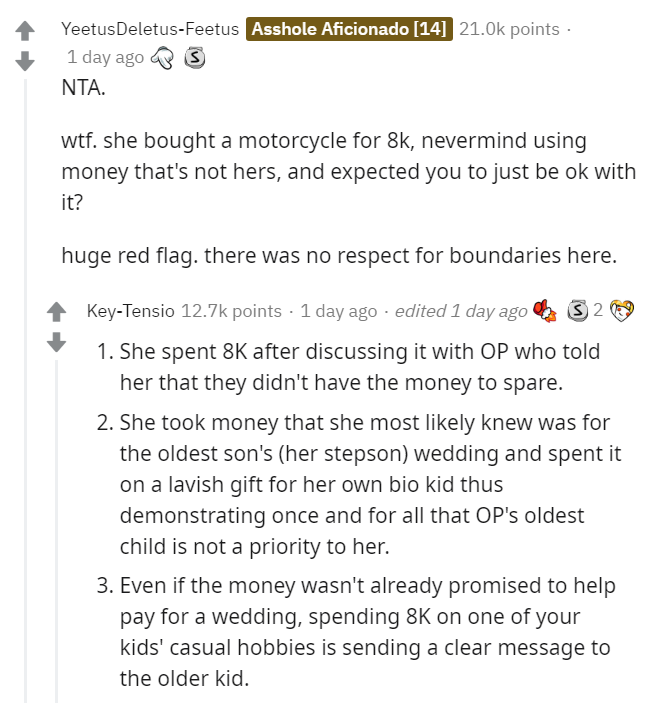 Even if the motorcycle kid doesn’t care about the oldest, at least they will learn where everyone stands. 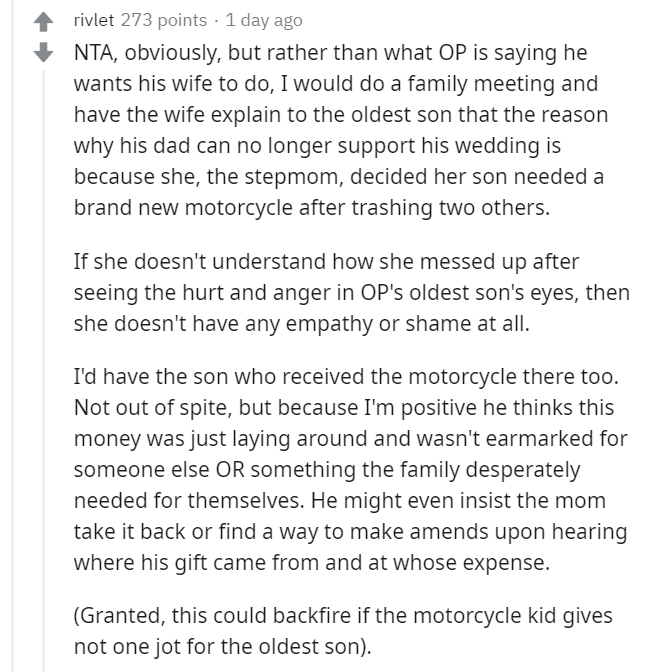 She asked him beforehand and he said no. She should have listened. 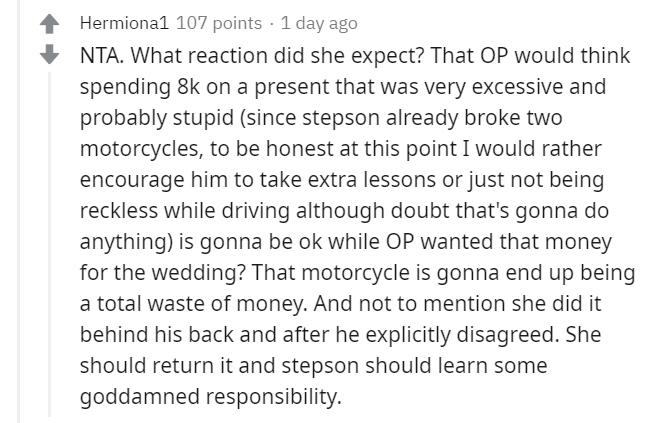 This is the only way she will understand the consequences of her actions. 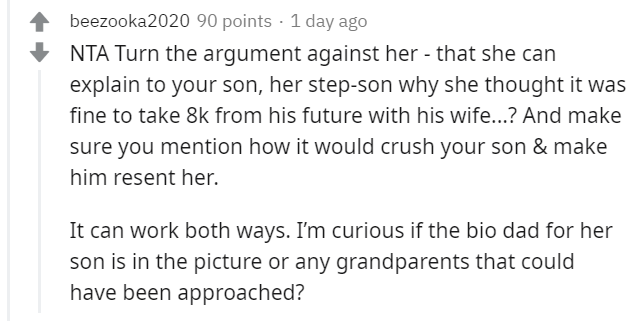 As mentioned in this comment as well, he shouldn’t own a bike right now, period. 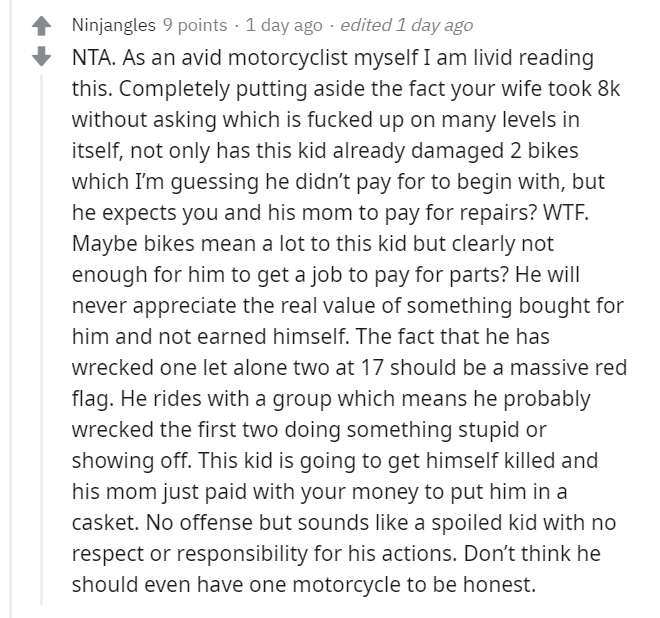 Your wife was completely out of line in stealing from you, in trying to force your hand by making a song and dance over the motorcycle as a surprise gift for her son, and in trying to emotionally blackmail you into going along with her by claiming that her son will be devastated.

Your wife needs to return the motorcycle immediately, before your stepson has a chance to damage it.

If she refuses to return the motorcycle, she leaves you no alternative but to explain to your stepson that she stole money to buy his Christmas gift, and that the motorcycle has to go back.

I also strongly recommend that you separate your finances post-haste. –Mysterious-System680

The wife should definitely return it and get as much money back as she can. 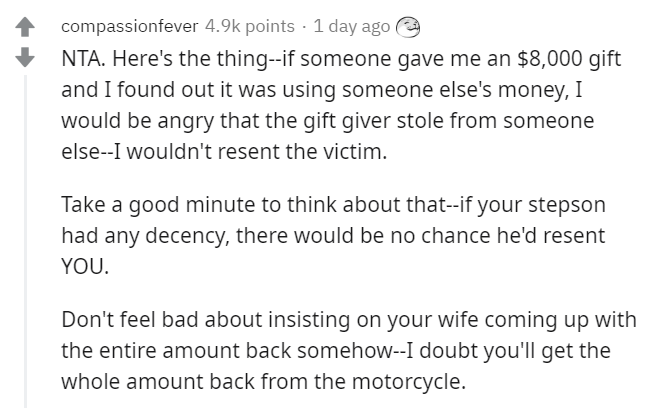 To make matters even worse the savings were only from him, and she didn’t contribute anyway. 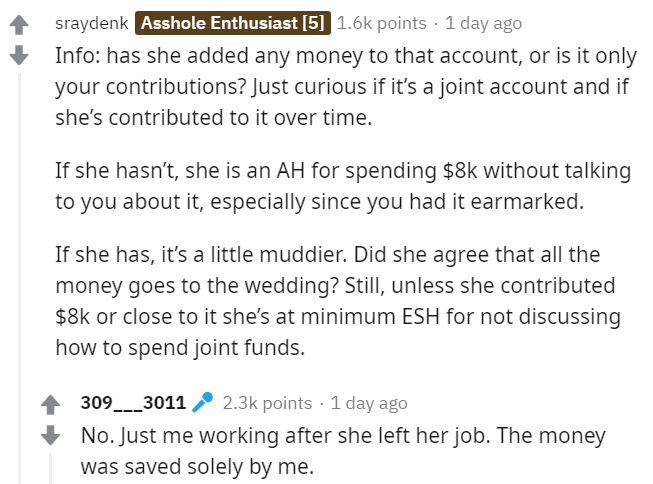 This may sound extreme, but it never hurts to safe now rather than sorry later. 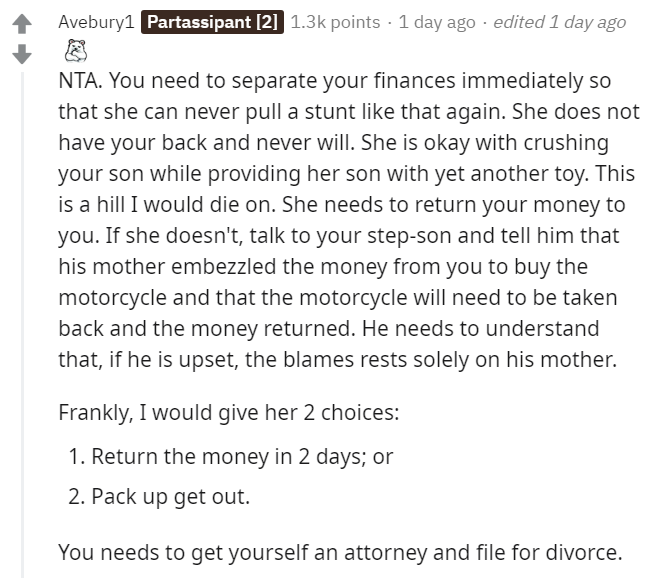 What do you think he should do? Should he force his wife to return the bike? Or let it slide? Let us know in the comments below.