Love can turn bad into good within moments.

Love is a very powerful source of energy and positivity that everyone is eligible to hold onto, try, spread, and feel but not everything is capable of doing so. It is not easy to love and love forever and ever. The powers of this emotion are so strong that it can turn around situations in moments. If you think of animals for a second, they are all so cute and adorable and we all love them dearly. Take pets, for example, they all possess such a positive and happy energy but that, unfortunately, is not the case for all of them, always. Some animals come from very rough pasts, they get abandoned by ex-owners and are left as strays to survive on their own while others spend almost all their lives in a kennel at shelters around the world, eventually be euthanized.

But I would certainly like to thank god for blessing the Earth with some superheroes who decide to transform their lives completely. They use the everlasting power of love to provide these animals with a new life, a new hope, a new chapter to live happily ever after and together forever.

Today we are going to look at some examples of humans transforming animals with the power of love.

Scroll down below to enjoy these before vs after comparisons of animals. The changes, after being struck by love, are very drastic and you might end up shedding a tear or two, or more.

1. He was found by a stranger on the streets, very sick. They took him in, fed him some healthy food, and 5 months later he is a totally different cat. 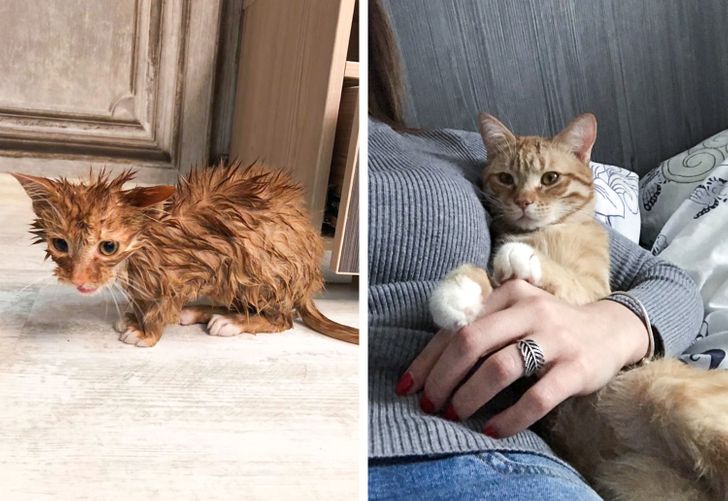 2. This is Asher. He was adopted in 2012 and looked very shy when he first came in. Look at this cutie now filled with nothing but positivity and love. 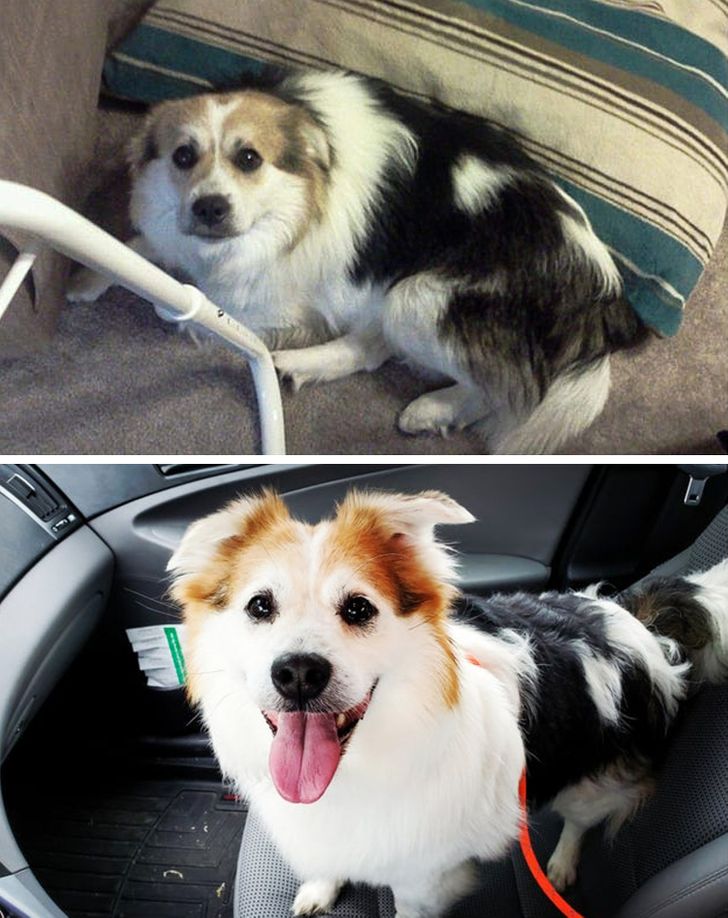 3. “2 years after their adoption and still getting fluffier by the day!” 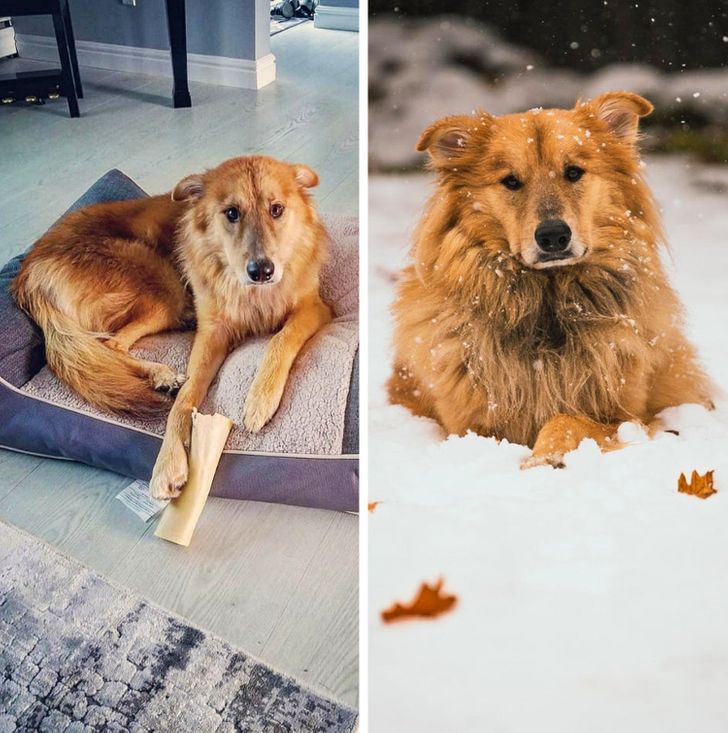 4. “3 years ago, I adopted this beauty that grew into a gorgeous creature!” 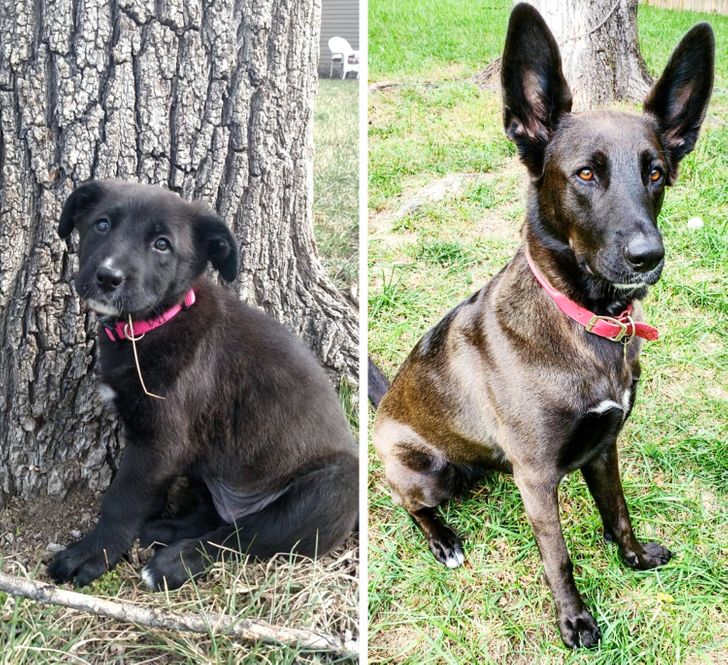 5. From hopeless to glowing with positivity, here’s what true love can do. 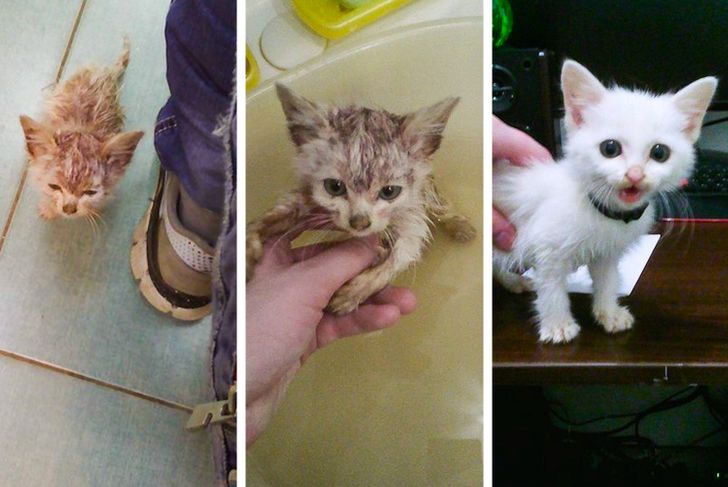 6. “I adopted George in October and the other day, I was in the local pet store and happened to see his picture in an ad posted by the woman that found him outside. She eventually brought him to the local shelter where I found him but the old picture brings tears to my eyes. He’s come such a long way!” 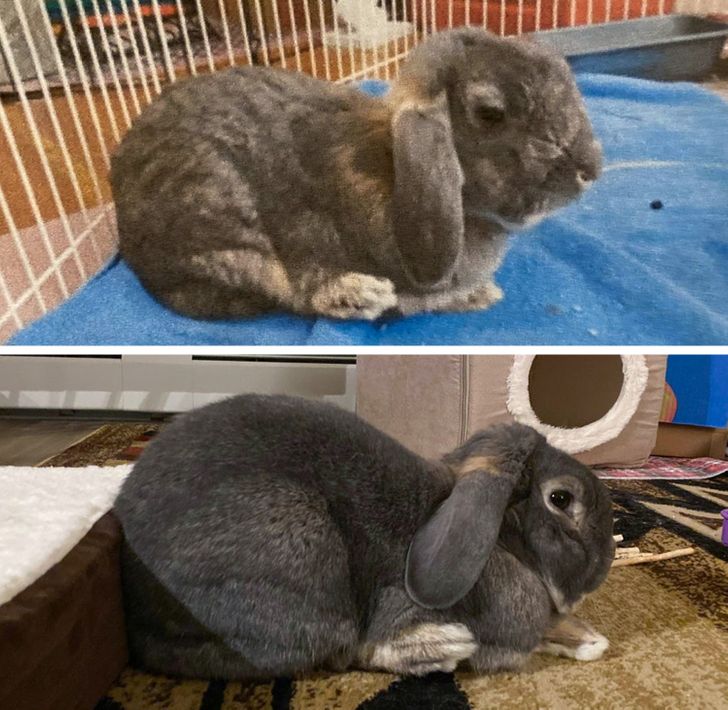 7. “Someone wrapped him in a plastic cover and left him to die on the road. We took him home. Finger for scale.” 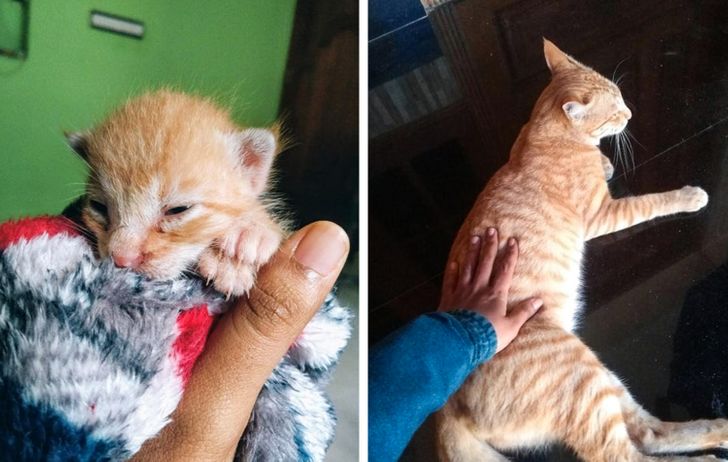 8. “My buddy’s best friend the day he found him on the streets 1.5 years ago to the present day! This is Bruno!” 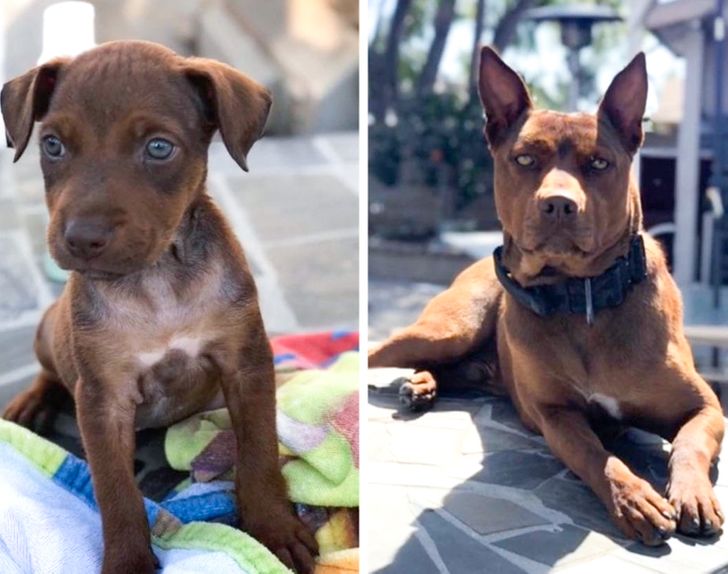 9. “Adopted this lovebug the day after Christmas in 2016. Best decision I’ve ever made! It’s safe to say she’s happy with the decision too.” 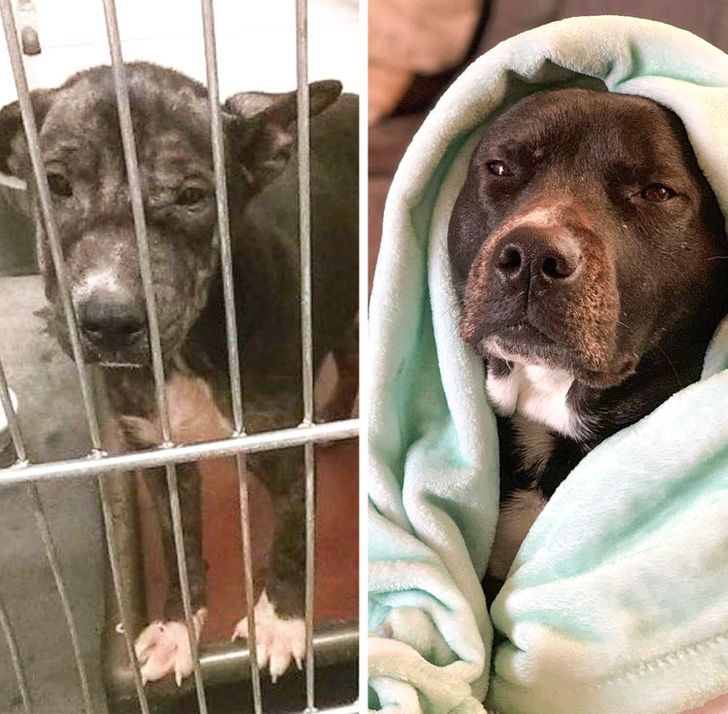 They are truly the purest souls of animals. The way we see them shining bright in all the after pictures, that’s how they should’ve spent their entire lives. Animals do not deserve to be in such an unfortunate position. We need them to stay happy and in order for that to happen, we need to make sure they stay happy and feel equally loved. I am so emotional and thankful for these people who decided to take it upon themselves and turn things around for these animals, for the greater good. We lack such heroes so they need to cherish as much as possible so this positive behavior and attitude towards animals is reinforced more and more.

10. “This is Lucy from November to today. My amazing wife saved her from the streets and disease.” 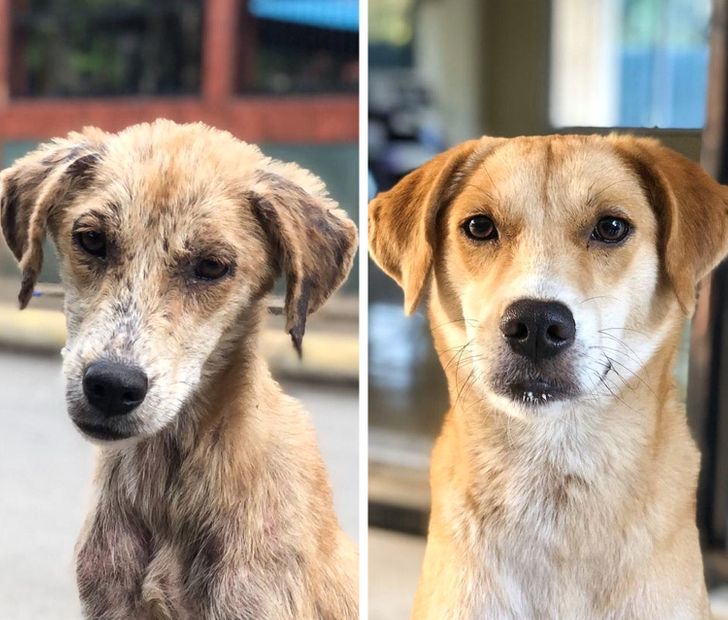 11. “From scared and alone to surrounded by toys and love” 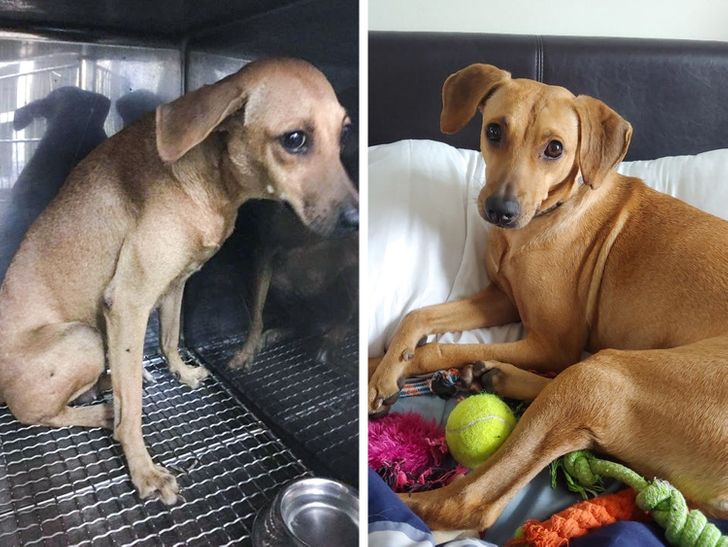 12. “The top photo is in the shelter, the rest are in his new forever home.” 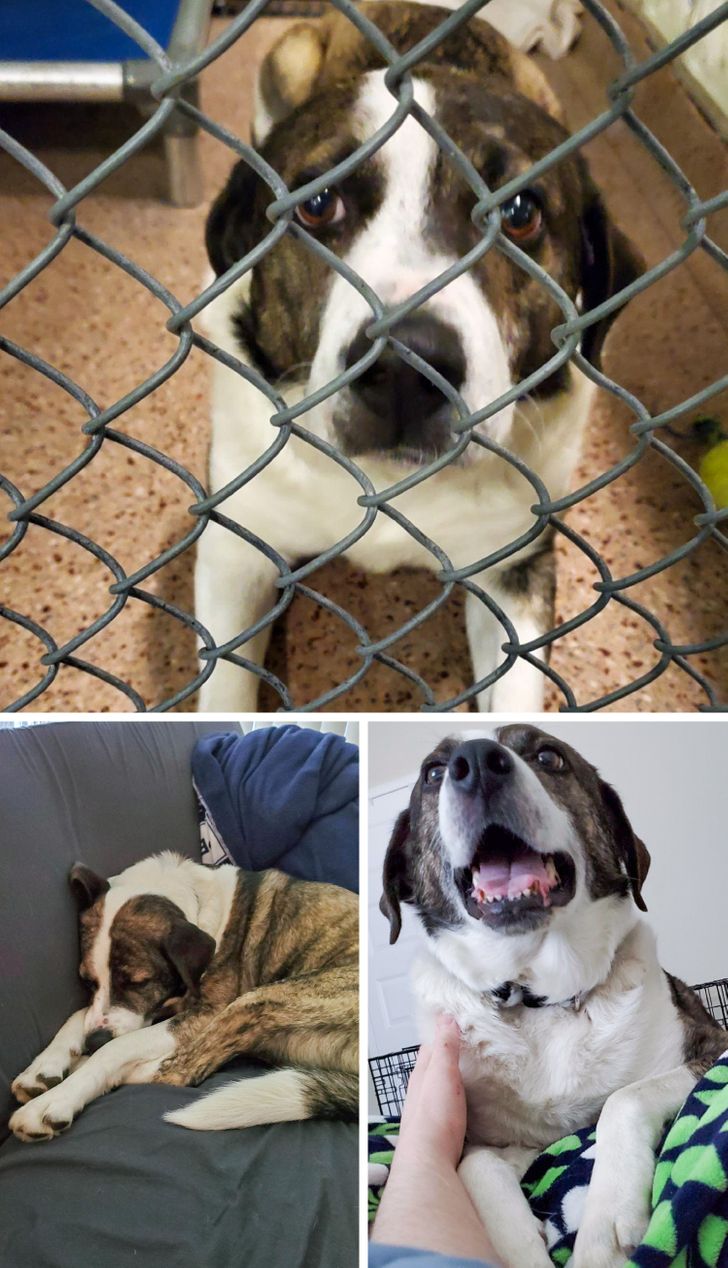 13. “I rescued Peanut 6 months ago from an abusive home.” 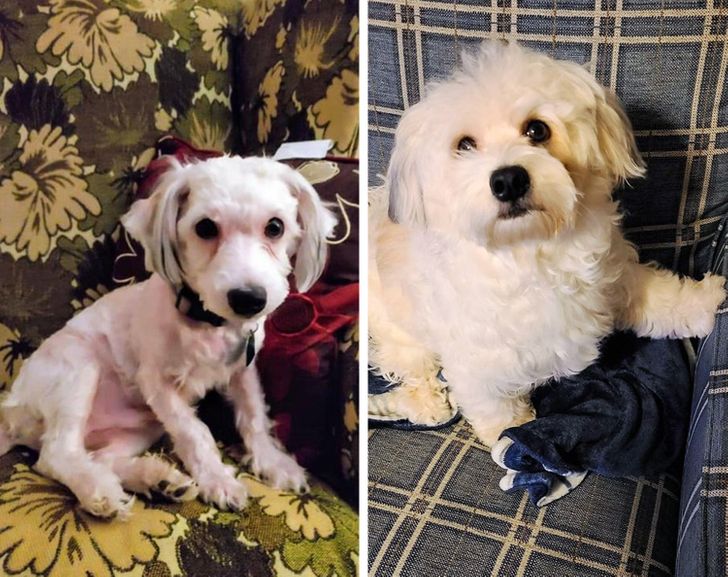 14. “Exactly 1 year ago today, I picked up this little baby. She’s refused to leave my side ever since. Happy Adoptiversary, Roxanne!” 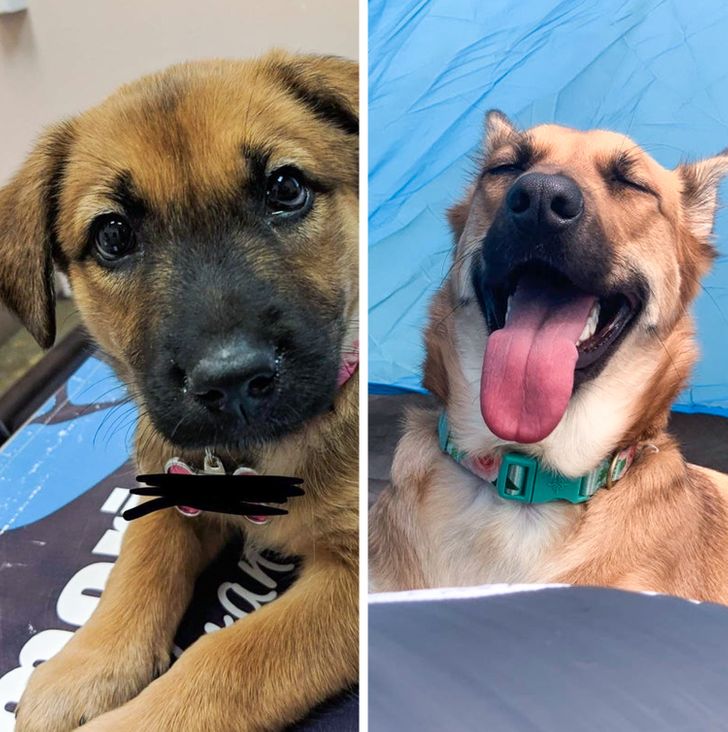 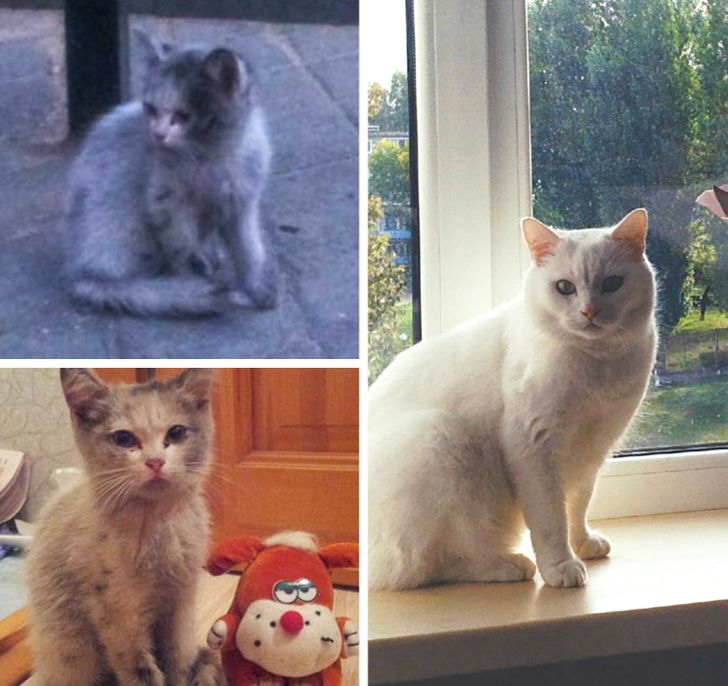 16. “Found this beautiful girl tied up on the highway. The vet said if she wasn’t taken in she would’ve probably died that night. It took her months before she would even be in the same room with anybody and now she spends all her time with her favorite people and her 4 animal siblings.” 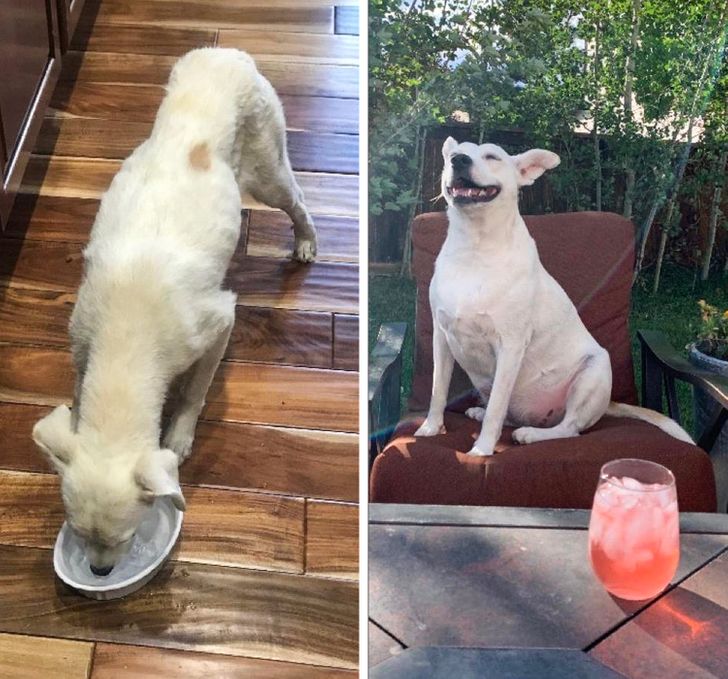 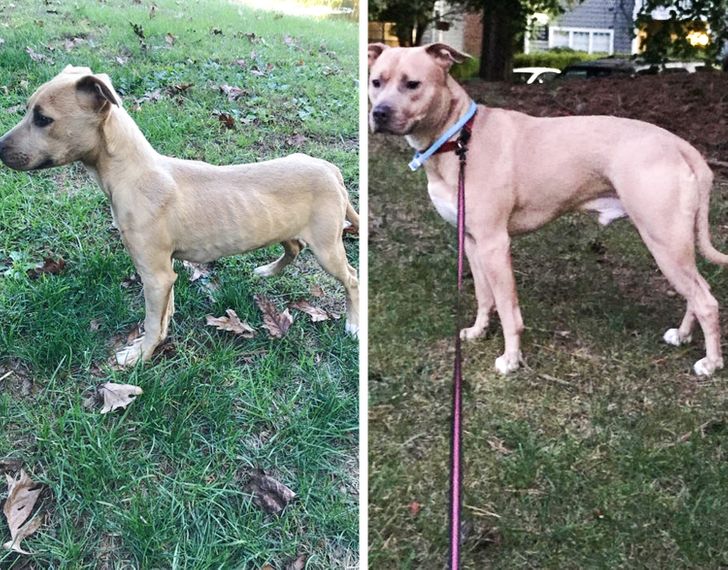 18. “2 months ago I found him mangled, likely run over, and almost dead due to dehydration. Today we finally took the cone off and let him chill with us on the bed.”

I know this one was an emotional one. Hope you guys enjoyed it. Don’t forget to share your thoughts in the comments section down below. How do you think this adoption process should be made better so animals never have to feel hurt.