It is tough to be hopeful about a good life given the conditions we are living in today’s world.

Getting stuck in a situation can really take a toll on your motivation and hopes for a better future, or a better life as a whole. This is the critical point where you have to decide if you want to give up on all hopes and rest your case or carry just a glimmer of it and hope for the best. And let me set the record straight, there is no situation in the world tough enough for someone to stay stuck in forever. Yes, it is not easy to get those hope levels high once they are at an all-time low but if there is a light, it has the potential to expand and you only need one caring and the loving entity or happening in order for that to happen.

The situation is very similar in the case of animals as well. Many of the happiest pets that we see enjoying life to the fullest often come from a very difficult and unfair past. They are abandoned multiple times, left out to survive on their own as strays, some live in shelters for almost all their lives, and out of those any are unfortunately euthanized. These animals go through a lot and it is hard to keep those hopes high for a better life after all that happens to you. But it only takes a moment for things to turn around. The animals we are going to be showing you today are the ones who had very little hope for a good life but weren’t completely hopeless and that’s all the fortune required to hold their paws and provide them with a transformation they had no clue about was possible.

Let’s enjoy this emotional and wholesome compilation together and enjoy animals’ turnaround stories.

1. Connie was found in a very bad condition as a stray in Thailand as can be seen from the picture on the left. Her new parents cared for her and pumped a new life into her and now he rules her forever home like a queen. 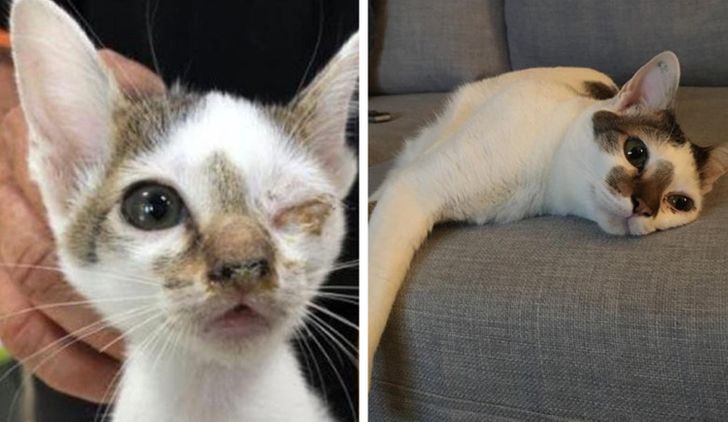 2. Pudding was adopted 6 years ago as a guard dog who would just be chained outside the house and was not catered to whatsoever. He was taught how to play by his new owners. It took time but he has been enjoying life eversince. 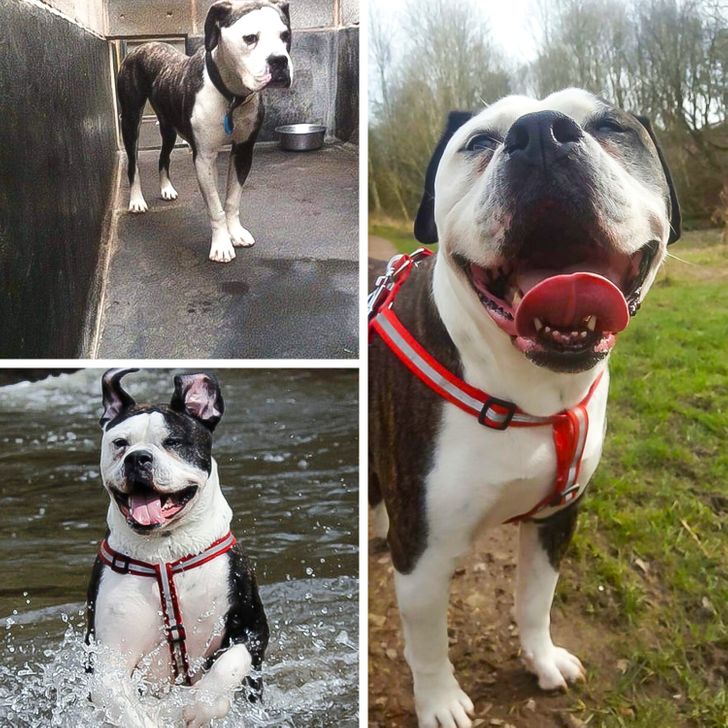 3. Meet Ryker. Fortune sent some superheroes in the shape owners to him just days before he was going to be euthanized at the shelter. Thank god for them, Ryker has been enjoying life ever since, the one he had always deserved. 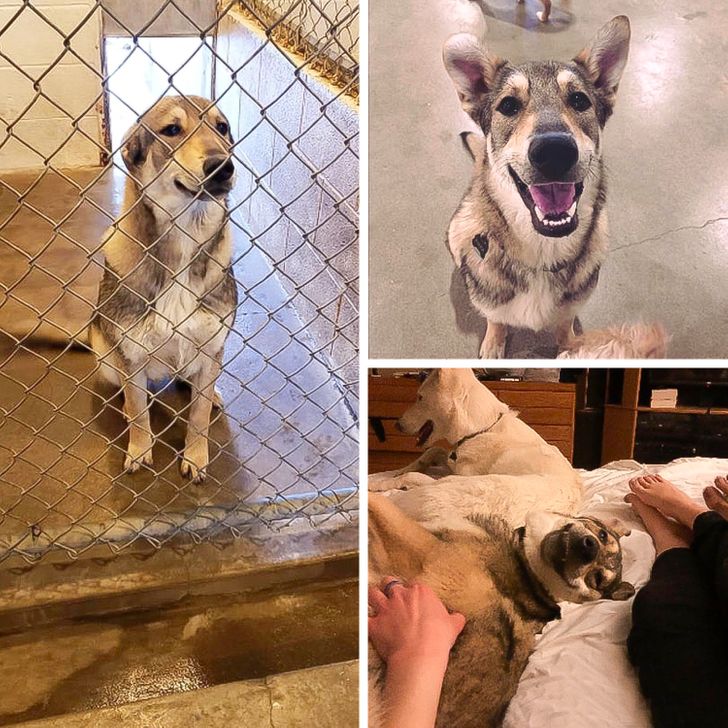 4. Look what love does to you. These two images are only 2 weeks apart. From being a hopeless golden retriever locked in a kennel at some shelter to an adorable Luna bursting with positive energy. 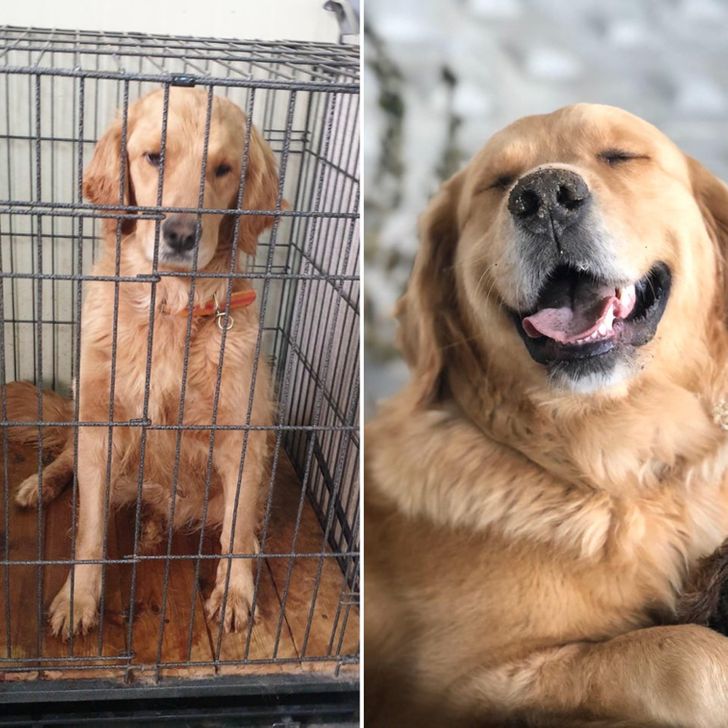 5. This couple found a skin-and-bones kitten under their house who was shattered and scared. 6 months later, she is now a proper floof and ready to explore the world. 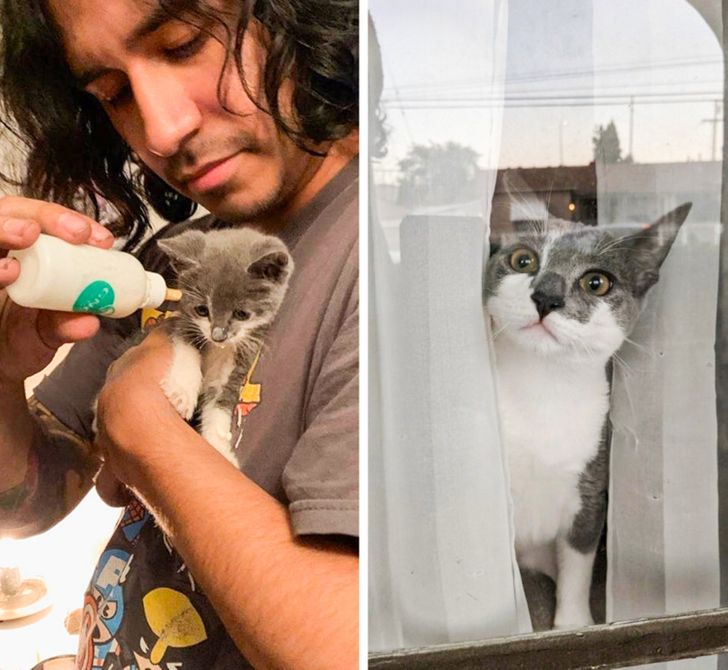 6. Look at Mick. He came wandering into this person’s garage 3 months ago and was never allowed to go back. Even his sitting stance looks more confident. This is the power of love. 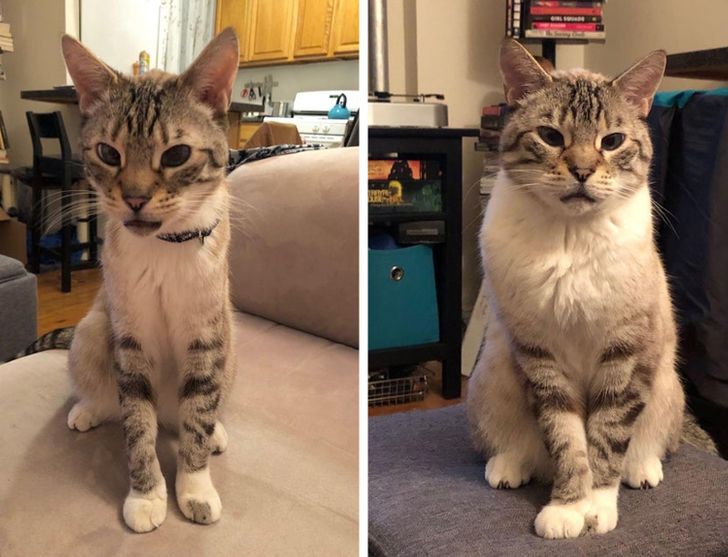 7. “One look at that sad face and I knew we had to save her. Old lady Madge is spending her golden years spoiled rotten and eating lots of peanut butter (with no teeth!).” 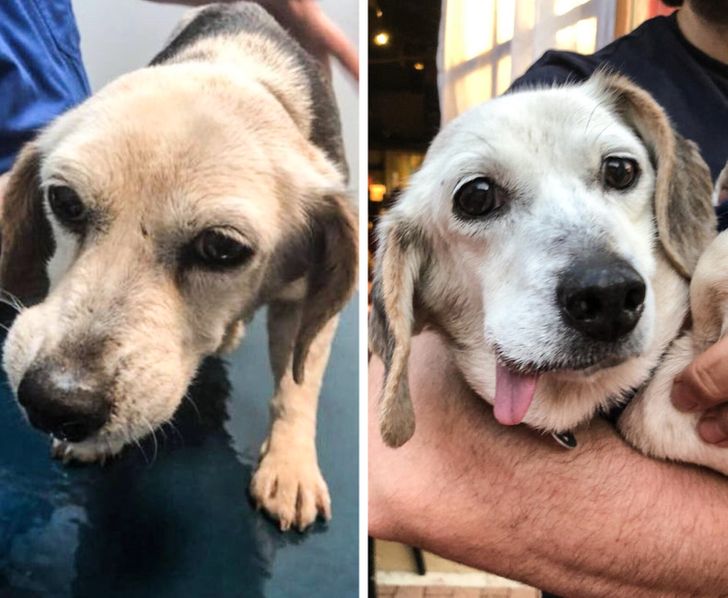 8. “This homeless cat got feline viral rhinotracheitis and couldn’t breathe. We spent 2 months curing her. And now she is okay.” 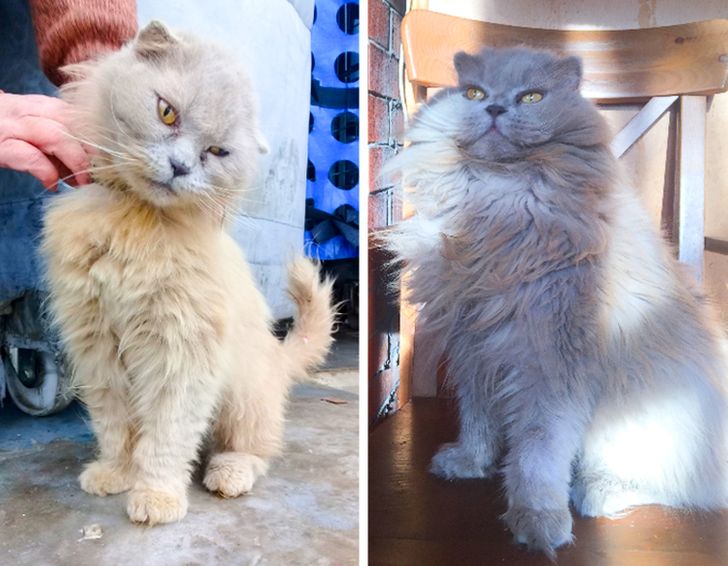 It genuinely breaks my heart to see all those before versions of the animals in the compilations. Their hopeless expressions are so touching and it feels like they are literally questioning the humanity as to why it happened to them. I feel so bad about where these animals came but at the same time, I am so happy and positive to know where they all are today. I respect everyone who helped these animals out, whether it was humans, sheer luck, or an act of fortune. I just want thee animals to always stay happy, prosper and live the best possible life, as they all deserve.

Let’s look at some more situations of the lives of more hopeless animals being turned around.

9. “From being found frozen on the side of the highway, to a gorgeous girl living the best life. She’s brought so much love into our lives.” 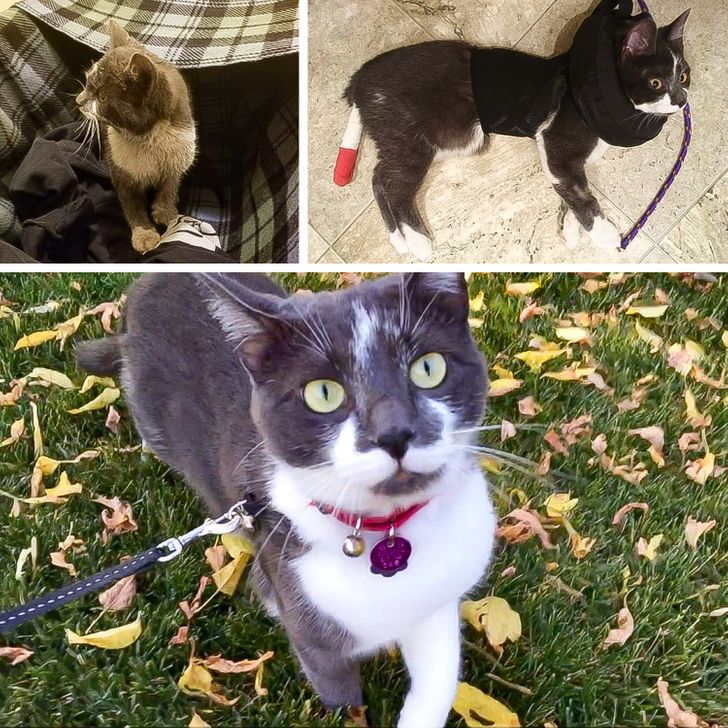 10. “They said it might take weeks to get adjusted. It’s been a week… I think he’s adjusting well.” 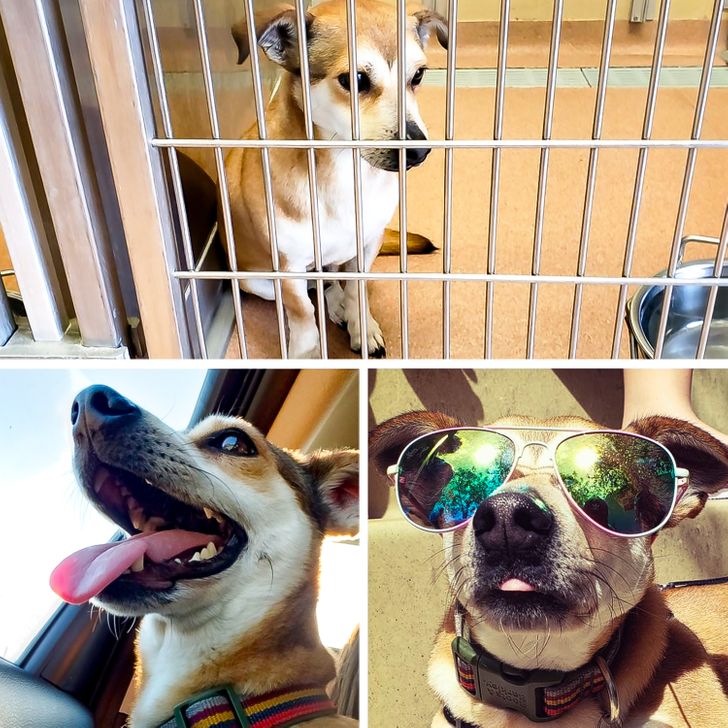 11. “This is Koya! She was a pregnant, starving stray with untreated allergies when I found her. Almost 2 years later and she’s a healthy loaf of a cat.” 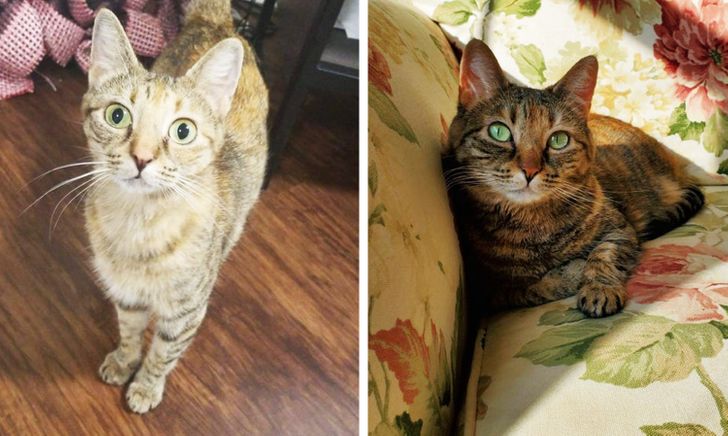 12. “3 weeks since rescued! Her name is Celery and she is the bestest girl.” 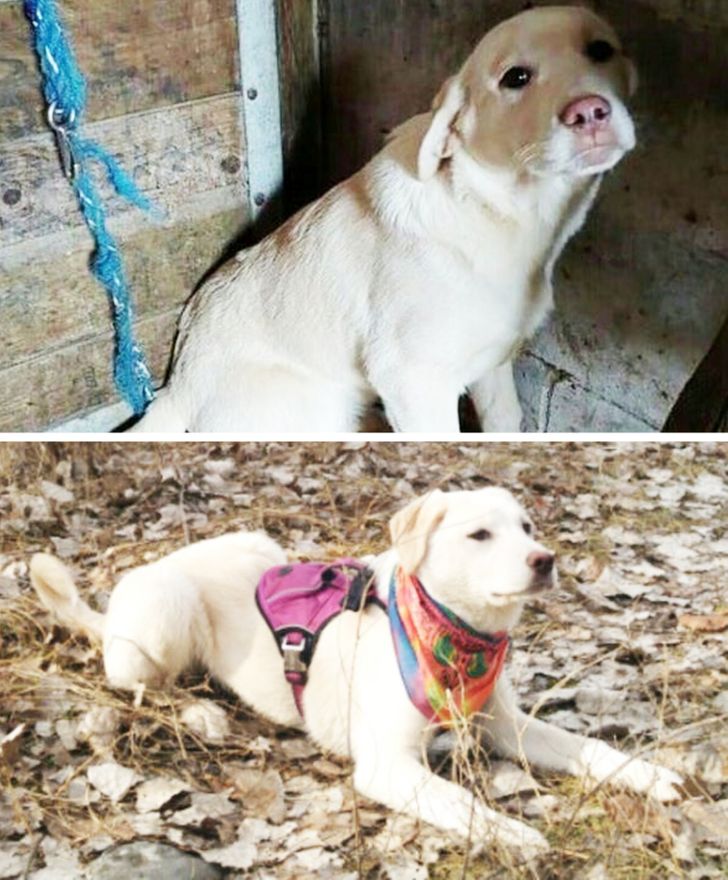 13. “Freya was rescued when she was just 3 days old. I’ve been blessed to watch her grow from a mole to a cow.” 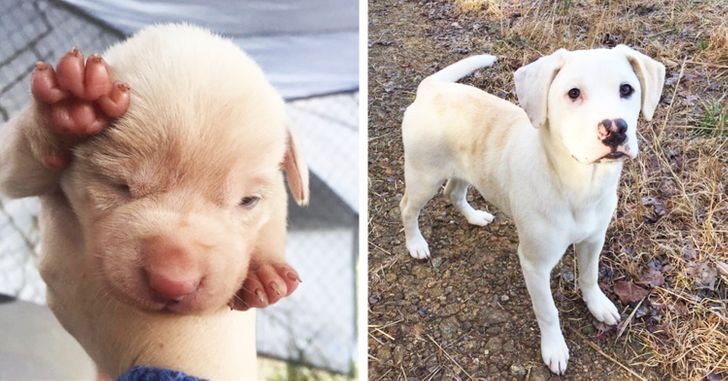 14. “From respiratory infections in a cage at our local humane shelter to Queens of the household.” 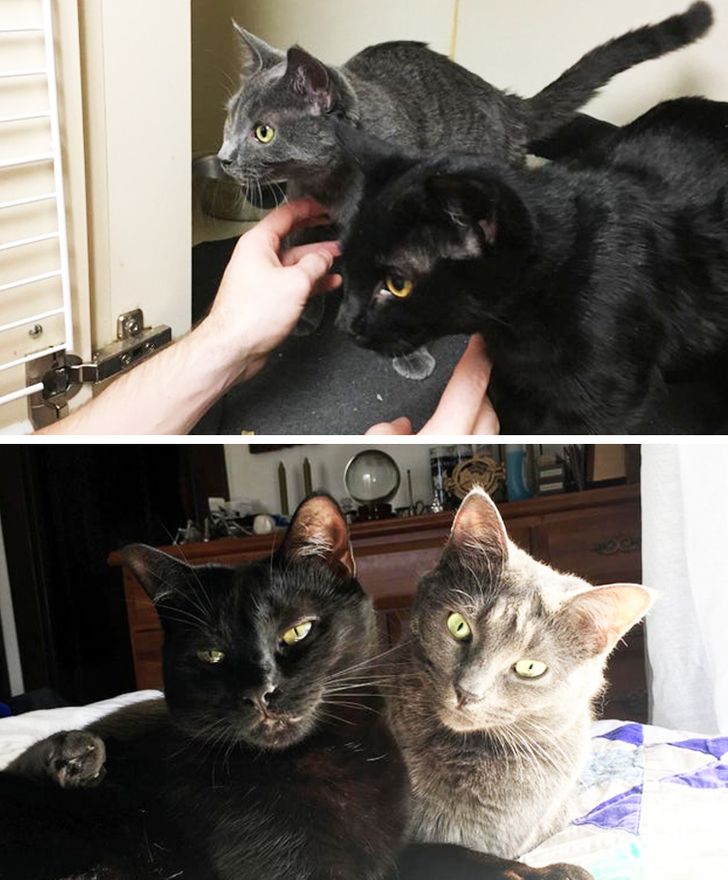 15. “We had fun recreating our first photo of Gus on the anniversary of his adoption. From sickly kitten to rambunctious cat.” 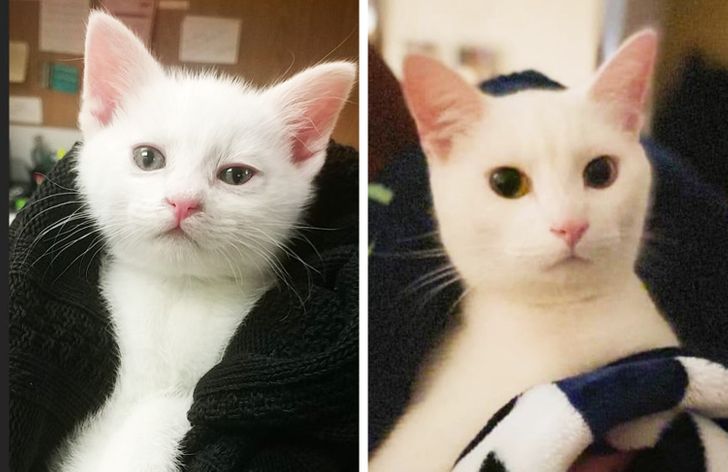 I am sure this one was not easy for anyone who loves animals dearly. But, we should all just cherish the fact that all these animals are now in safe hands and are living a life they always wanted to live, with very high hopes for life.