Dealing with a narcissist can be very frustrating.

You can never tell a narcissistic person that they are wrong. They will fight you to the death to defend themselves. People like that do not see anything wrong in their actions and think they are above God. They don’t need to account for their actions and they always have justifications for the things that they do. Arguing with them can be pretty useless because they will counter attack you, gaslight you, and when nothing else works, they will just get angry and create a scene. It is way too much drama to go through for someone who sees nothing wrong in their actions. Narcissists also tend to rage up when they are given reality checks or if someone tries to humble them. It is a very complicated situation and these people need professional help.

This woman on Reddit shared an incident about her father getting mad at her for calling him old and ugly. Apparently, the woman’s dad was a narcissist and thought every living, breathing person on the planet who is nice to him has a crush on him. When the daughter gave him a reality check, he got defensive and eventually got mad at her. The woman asked if she was wrong for doing so. Scroll down below to read the whole story:

The woman’s dad is 70-years-old and thinks everyone has a crush on him. He would even convince himself that young waitresses like him just because they are being polite. The woman thought it was a joke at first but then realized her dad was serious about it. 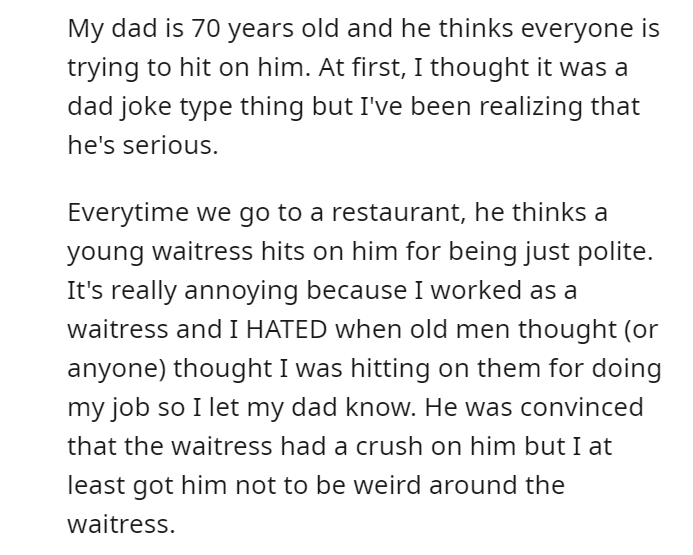 It escalated when her father told her about a gay client that he had. He thought the client was trying to hit on him because the client invited him over to dinner with his wife because he was excited about the construction of his house. 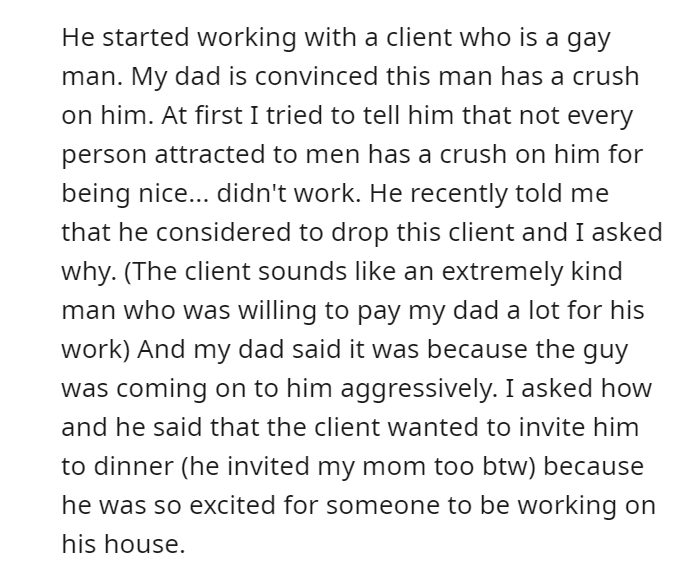 The woman started laughing at her dad and told him he is way too old for the client and the client is married and not interested. 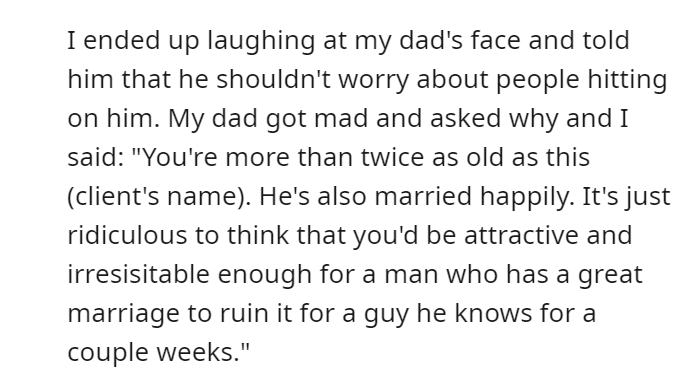 The woman’s dad got mad at her and her mother wants her to apologize because her dad now refuses to talk to her.

This is why the woman thinks she was in the wrong:

Honestly, the woman’s dad needed to be brought down back to Earth. His narcissism was reaching the skies and this would even start to cause some damage if it went on. The woman could have worded it better but what is done is done and she should not feel bad for telling her father the truth.

The girl should not apologize. 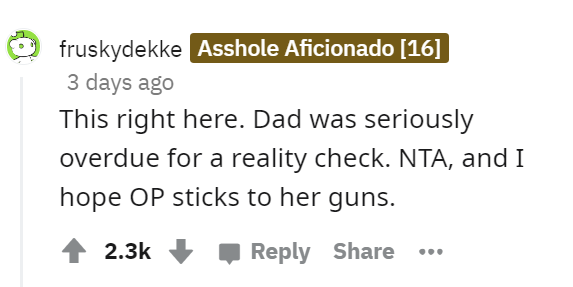 The dad has a massive ego. 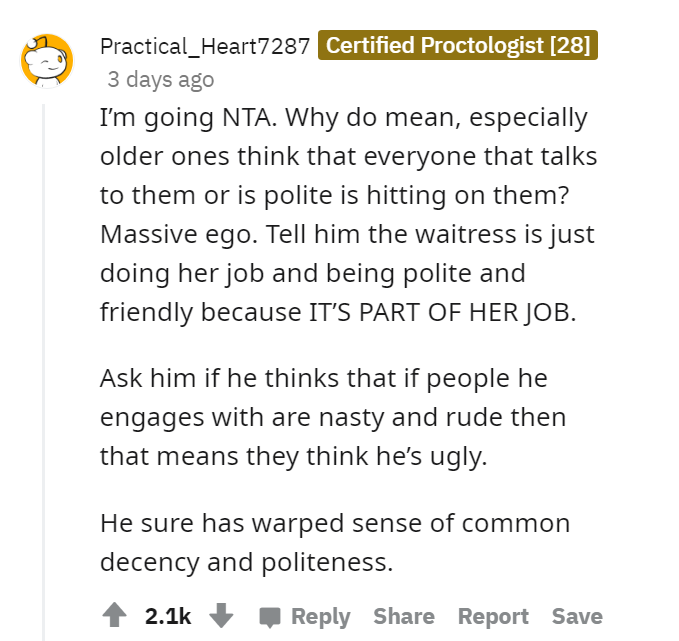 It will start interfering with his business. 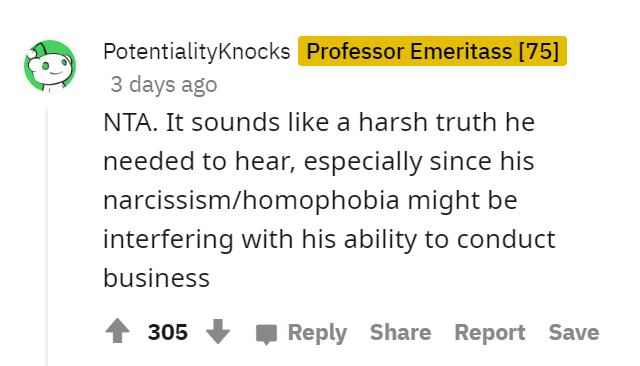 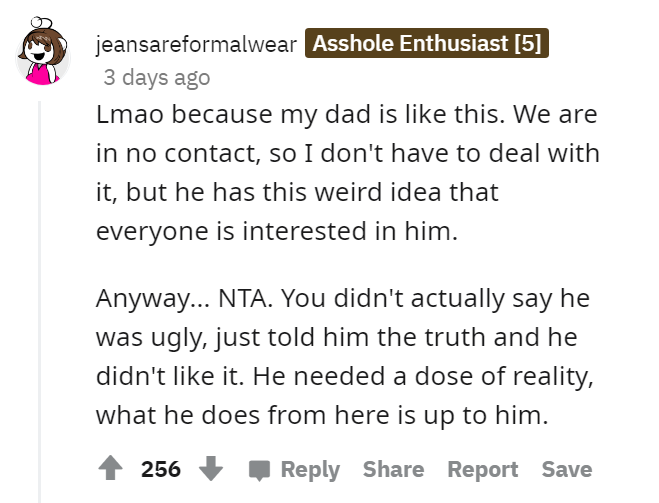 There is a line that you just don’t cross. 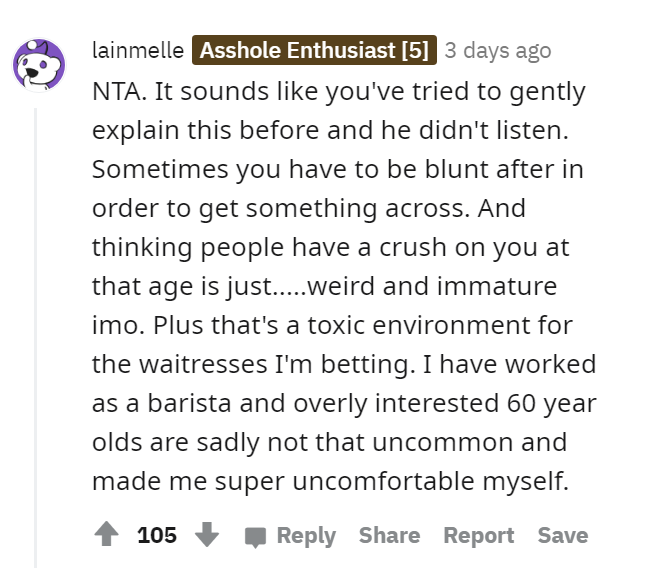 He should get some help. 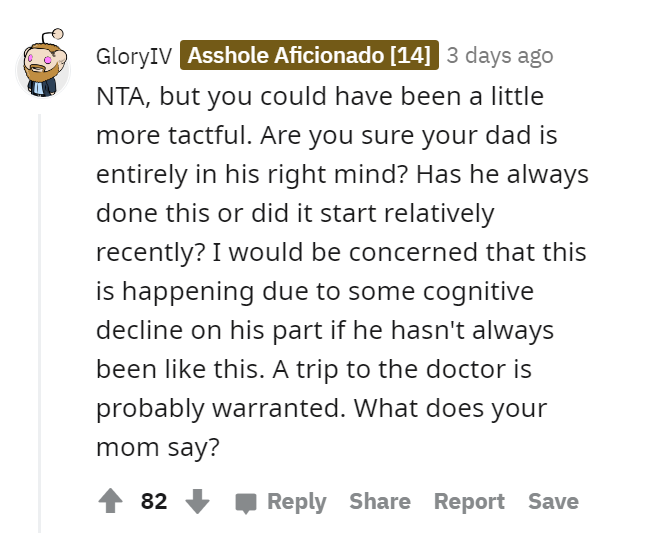 It is so creepy sometimes. 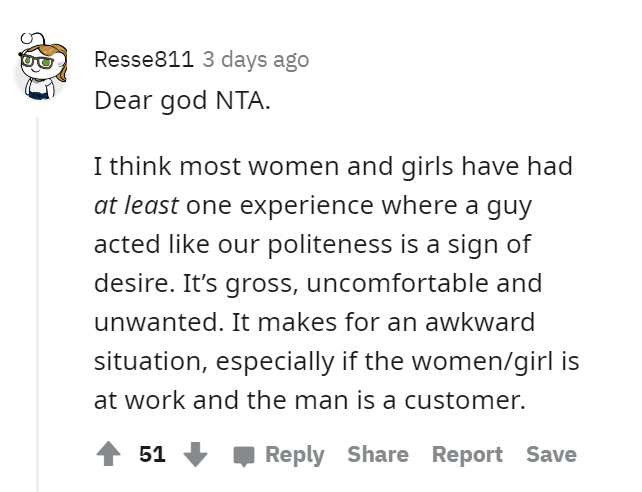 He definitely is a narcissist.

Who do you think is in the wrong here? Let us know your thoughts in the comments below.