This demon did not know what he was getting into.

Sometimes we unintentionally make someone happy without even realizing it. The things we thought were mistakes at first end up making our lives so much more beautiful. And that is the main theme behind this bittersweet story. This story actually originated from a writing prompt on Reddit.

But it has turned into something much more. Something that I can’t even put into words. It’s a story about a grandma who accidentally summons a demon and since she can’t see properly. She continues on as though he is her grandson. It may seem like a dumb premise but I would love to see a series made on this.

Why has Netflix not already picked this up for a show? I am pretty sure it would be a hit. A sort of dark comedy. You’ll understand what I am talking about once you read below.

The story starts out with some confusion from the demon. 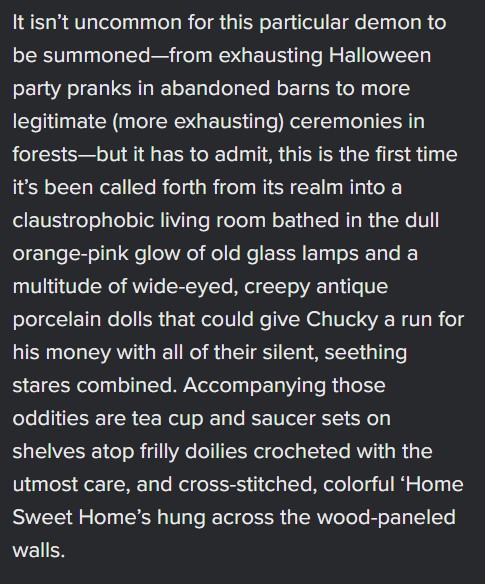 How did he get summoned here and why is no one here? 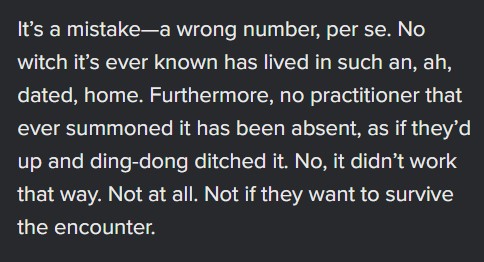 All these questions encircling the demon’s mind are soon answered. 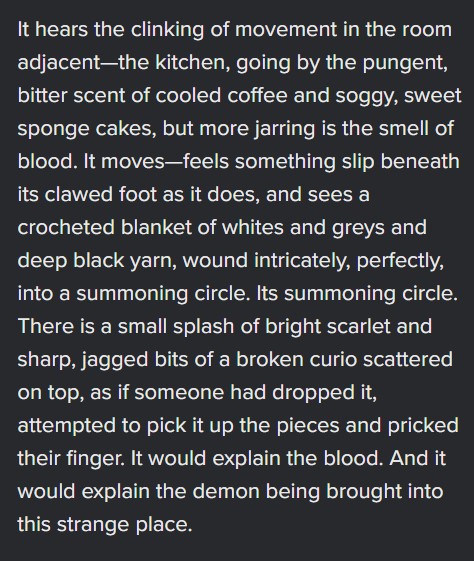 He realizes that he is not at a normal witches’ house. 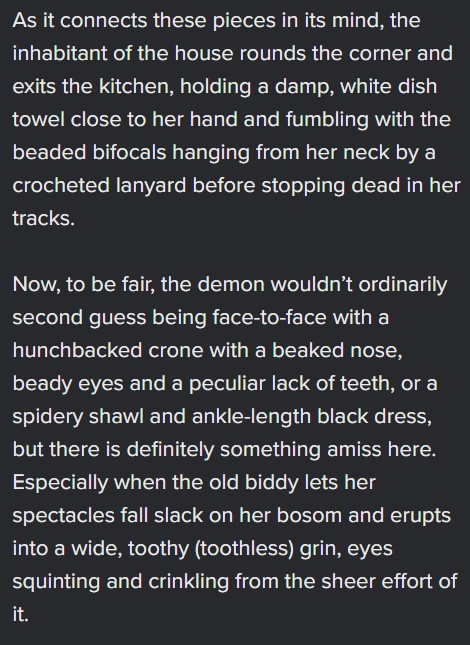 To be fair, a usual witch isn’t this kind-hearted. 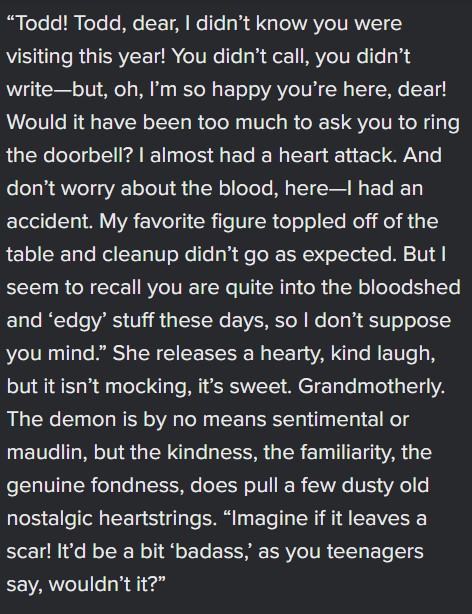 This old lady seems to think he is her grandson which surprises him. 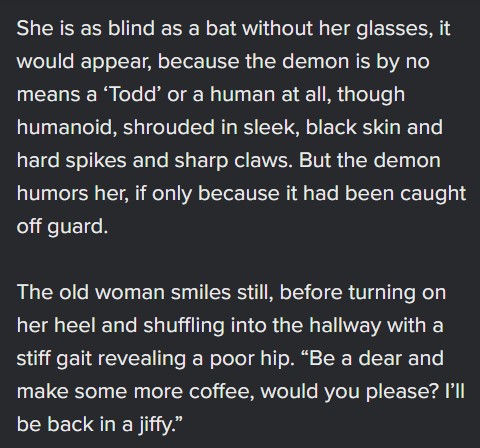 Since no one would look at him and think he remotely resembles a human. 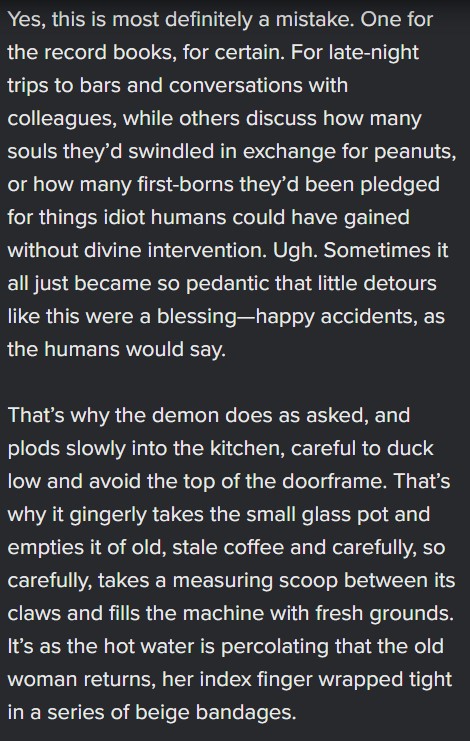 He is taken aback by the show of affection from the old lady. 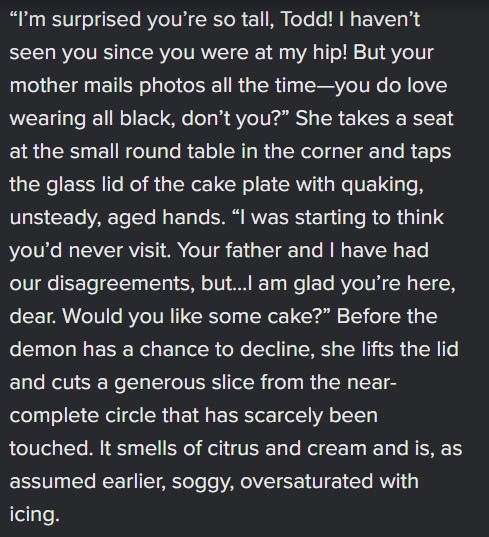 He has clearly never experienced something like this and it is making him uncomfortable. 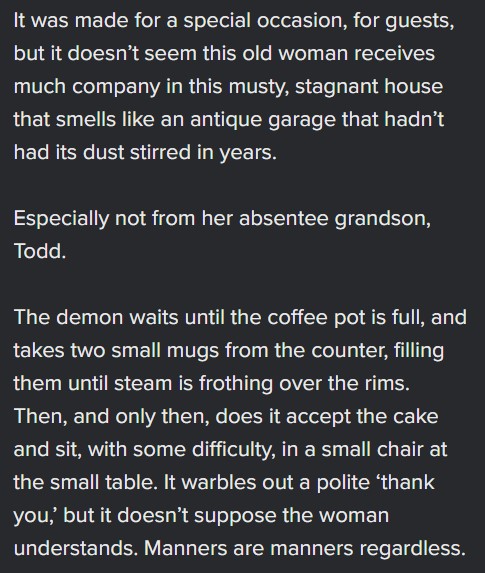 However, he goes along with her fantasy for the time being. 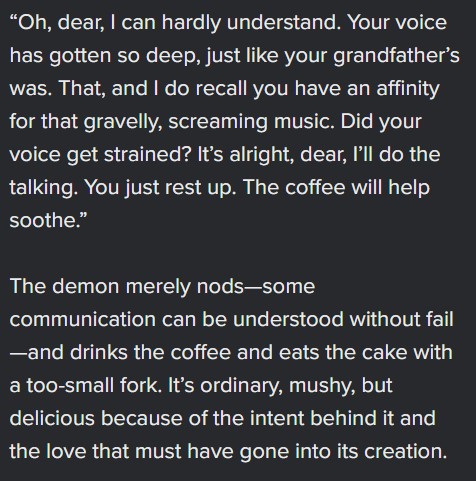 He doesn’t know why he does that but he just can’t let her heart break. 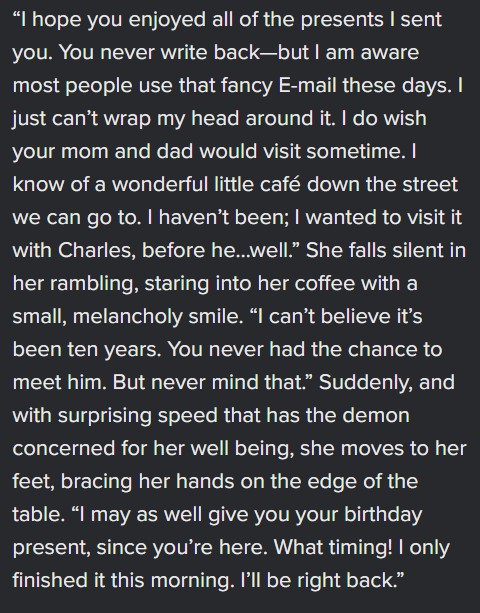 So he decides then and there that he will be her grandson from now on. 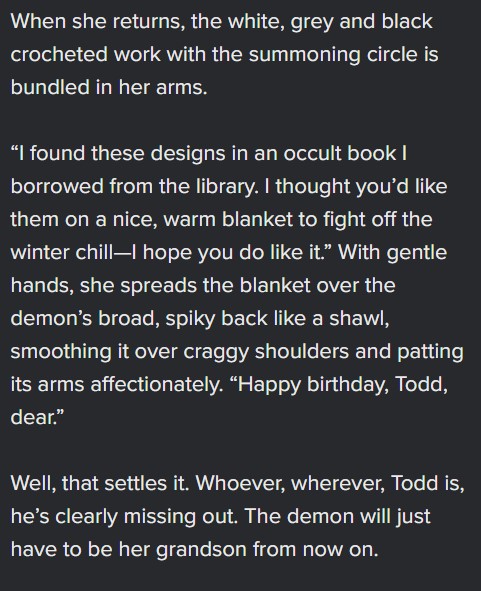 They even go outside and the people are surprised to see a demon but remain quite. 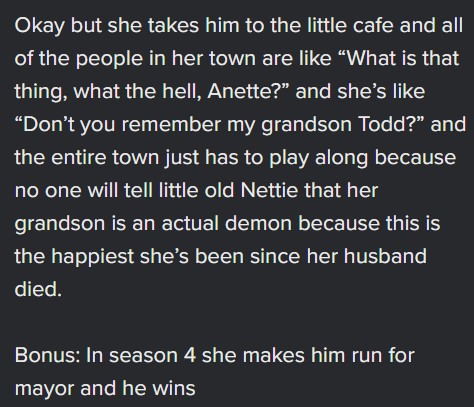 And her heart is what he wants the most. 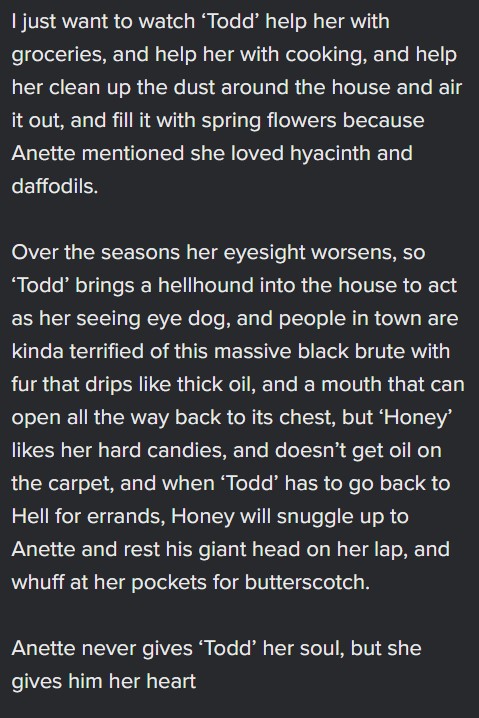 They spent a long while together but he doesn’t want to let her go. 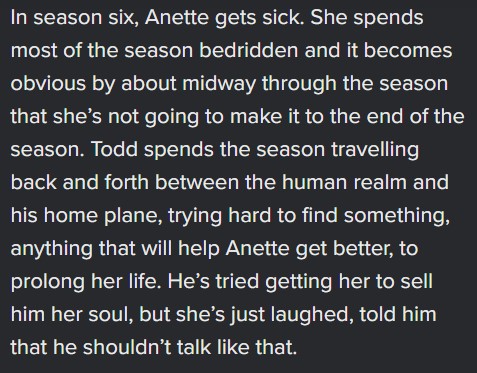 So he fights the reaper that comes to take her away. 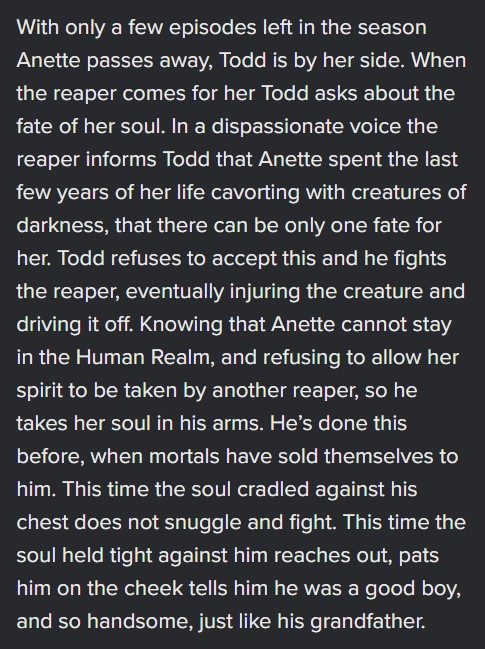 And goes on a journey that no other demon has ever taken. 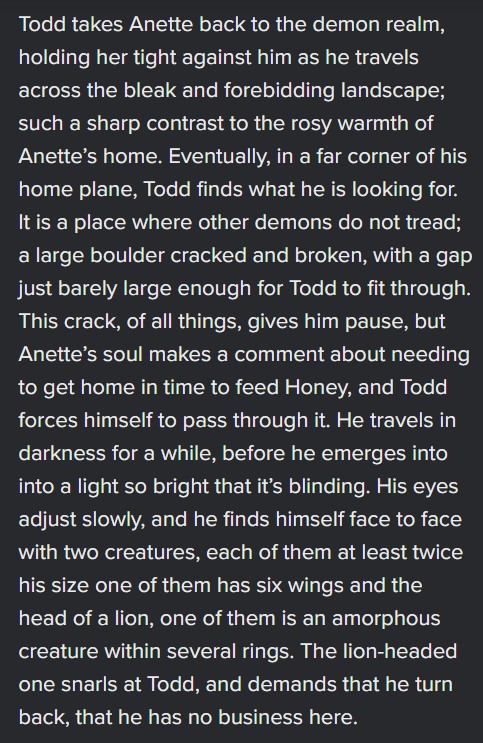 No matter the hurdles he keeps going towards his destination. 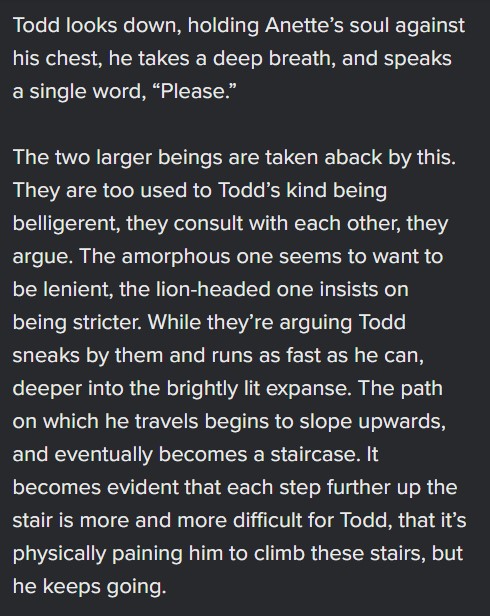 He is getting tired by the moment but he never gives up for her sake. 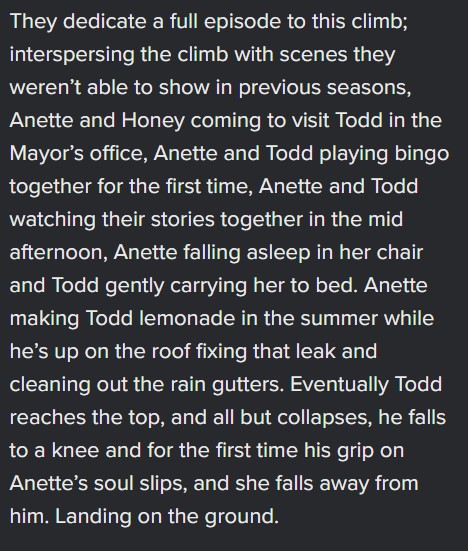 He has done what he needed to do and now he has to go. 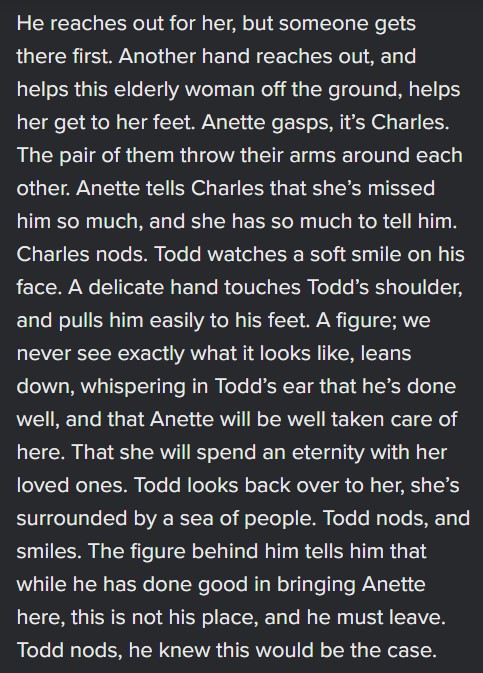 But it seems she is the one holding onto him now. 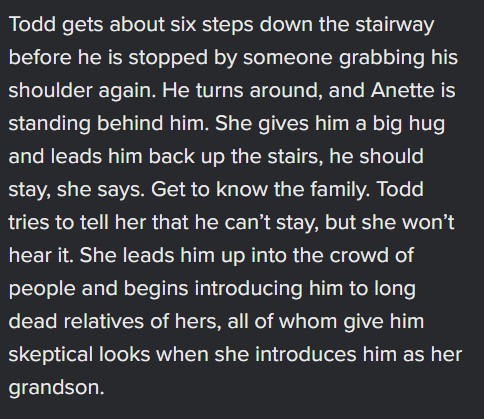 And this is how the story of an old woman and her grandson ends or does it?

Iread this as i was intrigued by the picture, i am now sitting with tears streaming down my cheeks ….. it’s Bambi’s mother all over again. -grannyMoo

I don’t know about you but I much prefer this ending.

Demon: You’re not blind here – but you’re not surprised. when…?

Anette: Oh, Toddy, don’t be silly, my biological grandson’s not twelve feet tall and doesn’t scorch the furniture when he sneezes. I’ve known for ages.

Anette: You wouldn’t have stayed if you weren’t lonely too.

Demon: You… you don’t have to keep calling me your grandson.

What are your thoughts on this beautiful story? Did it bring tears to your eyes? Comment down below and let us know. Don’t forget to share so others can marvel at it as well.