Entitlement is a liability and never was an asset.

If you are currently reading this, you are very familiar with the entitled ones of this world. If for some reason, you have been living under a rock, I mean no offense, entitled people are basically the ones who are really full of themselves, like right up to the brim. They are a strong believer that they know and can do anything and are way beyond everyone else in terms of superiority. If this word “entitled” is confusing you, let me choose a better, more famous word, for you guys to better understand this concept of high-level ego; Karens! Exactly, Karens. Now we’re on the same page.

Now women often turn into Karens when they are about to become brides. I don’t know what happens, but something does happen to them and they go all crazy before their big day. And it could literally be about anything, a venue that they decided, a dress that they selected, a guest list that they finalized, some of it has to get smacked. And they can actually make some baffling last-minute requests too.

Speaking of last-minute requests, there’s a subreddit called r/ChoosingBeggars that has got some crazily hilarious stories on how entitled people can really be. And it’s got some amazing bride stories too.

The story we’ve got for you guys today is about a bride who sent a message to this person who creates and sells 3D-printed items on customers’ requests. The author of the story was asked by the bride if they could 3D-print the wheelbarrows they used at their own wedding. The bride had plans to give those customized wheelbarrows to the guests so she was basically ordering quite a few. The author responded with a quotation that came up to a total of $4,718 and would require approximately 55 days of continuous 3D printing to achieve the order they requested to be made.

The bride, for some very odd reason, had other plans. She wanted that $4.7k product to be a wedding gift instead of paying for it. I mean…

1. Just like all conversations, it started very normally. This bride approached a 3D-printed item manufacturer and had a special request. 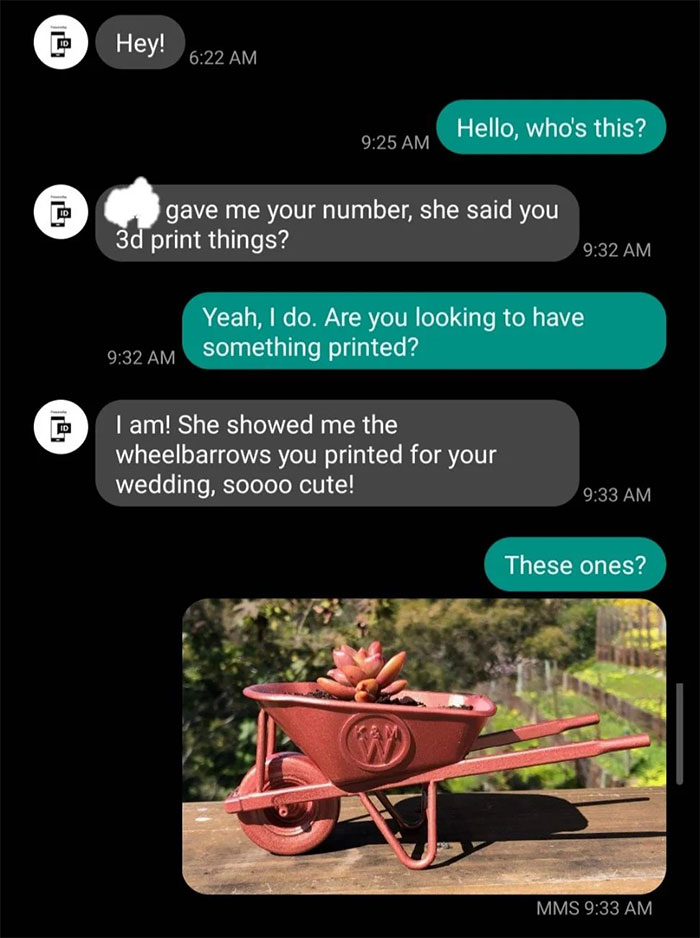 2. The bride wanted custom wheelbarrows made to be given to the guests. Something that could be very costly. 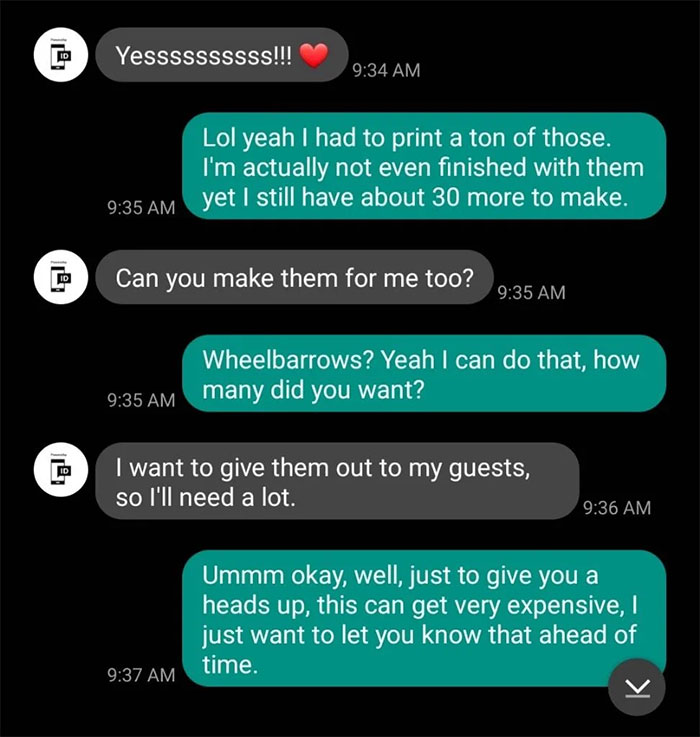 Perhaps the bride is from a very rich family and doesn’t mind the expense factor at all? Who am I kidding?

3. The bride hears the outrageous price and reacts outrageously disrespecting the work too. What else did she expect? $10 for the whole thing? 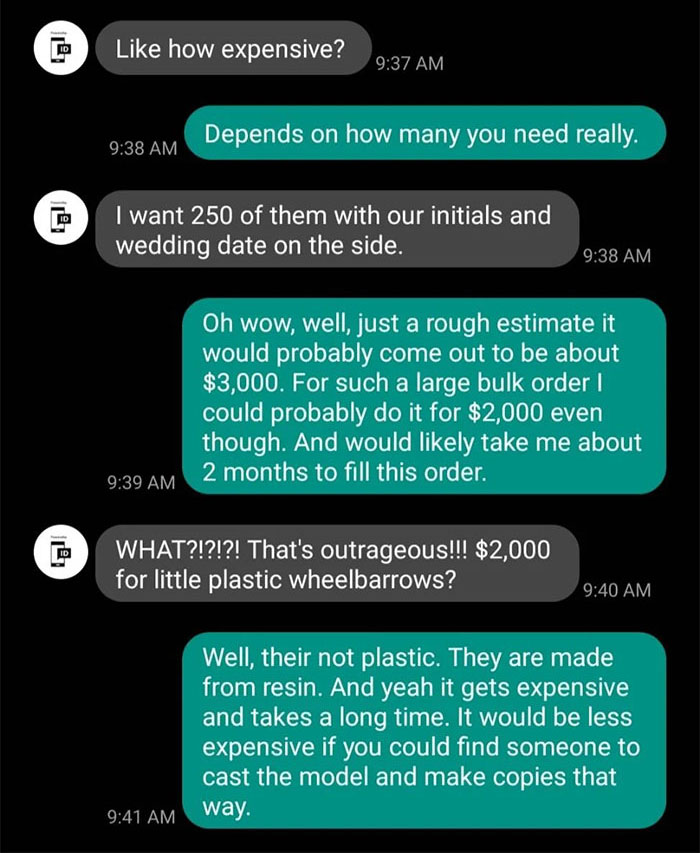 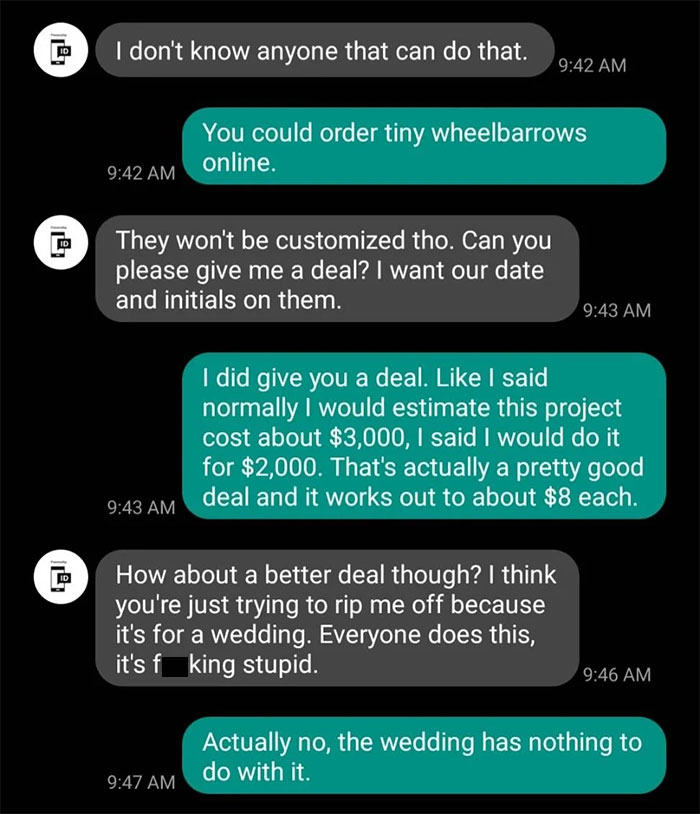 It boils my blood when people say “everyone else does this for this much”. Like go piss off to them and make them do it, ugh!

5. Free?! Uh ho, you just brought out a certified Chartered Accountant in her. Here comes the cost breakdown… 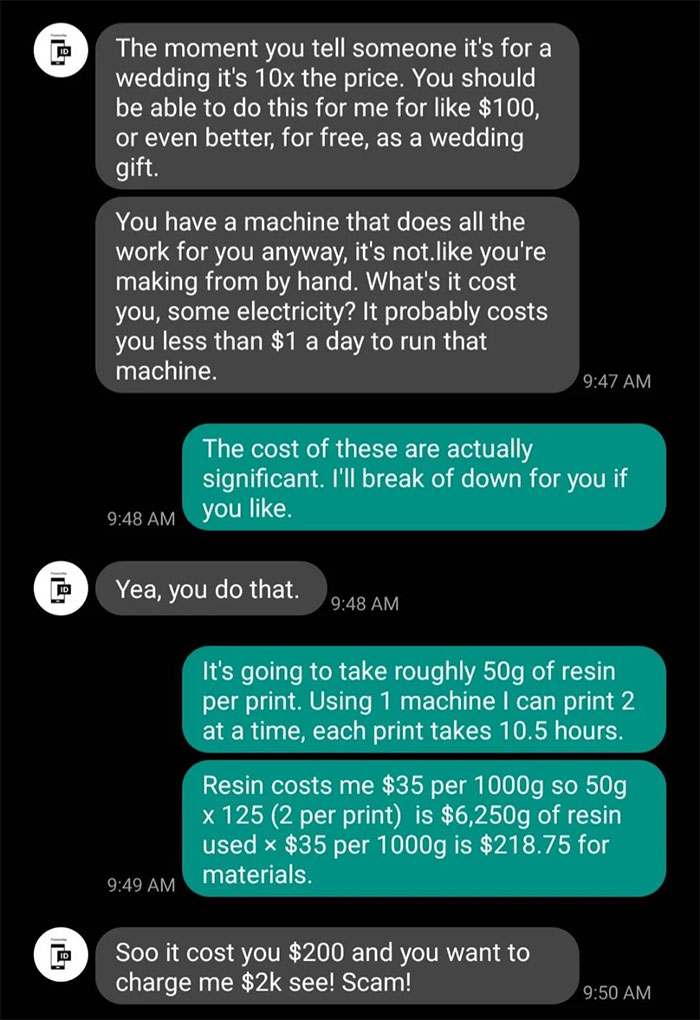 Chill out, Karen! Let her complete. 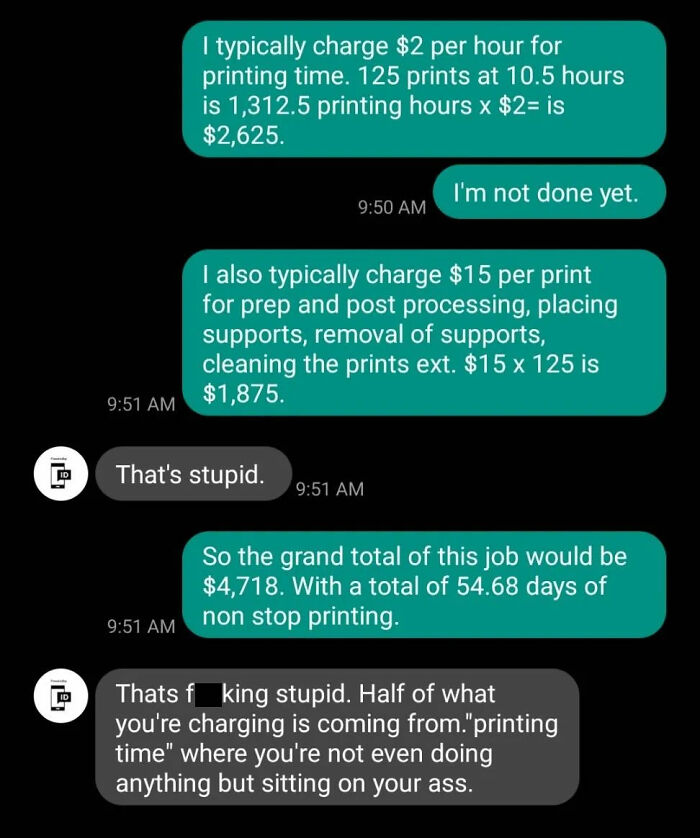 7. Oh my god, after all that the author is still being super nice to this entitled bride and is trying her best to sort things out for us. 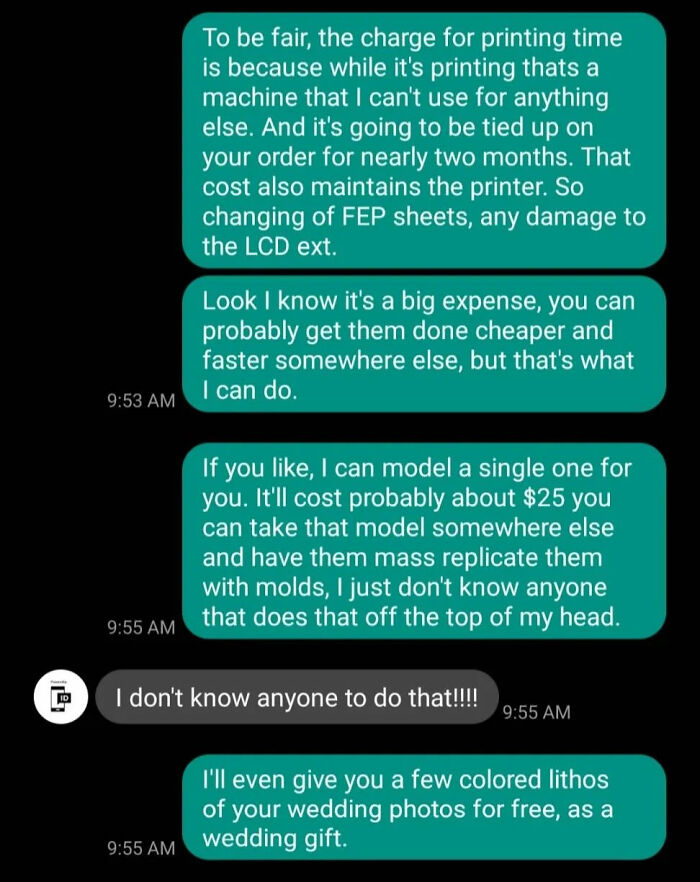 8. “I don’t see why you can’t” Oof! The audacity. Maybe cuz not everyone can bear thousands of dollars worth of cost for someone so dumb! 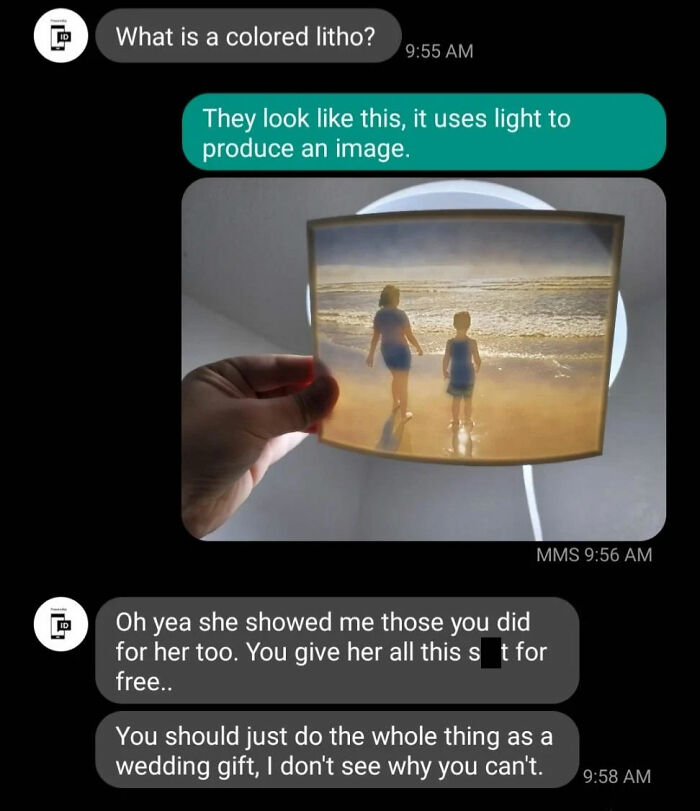 9. Ahaha that one last attempt with a couple of pleases and back to cursing. Classic Karen. 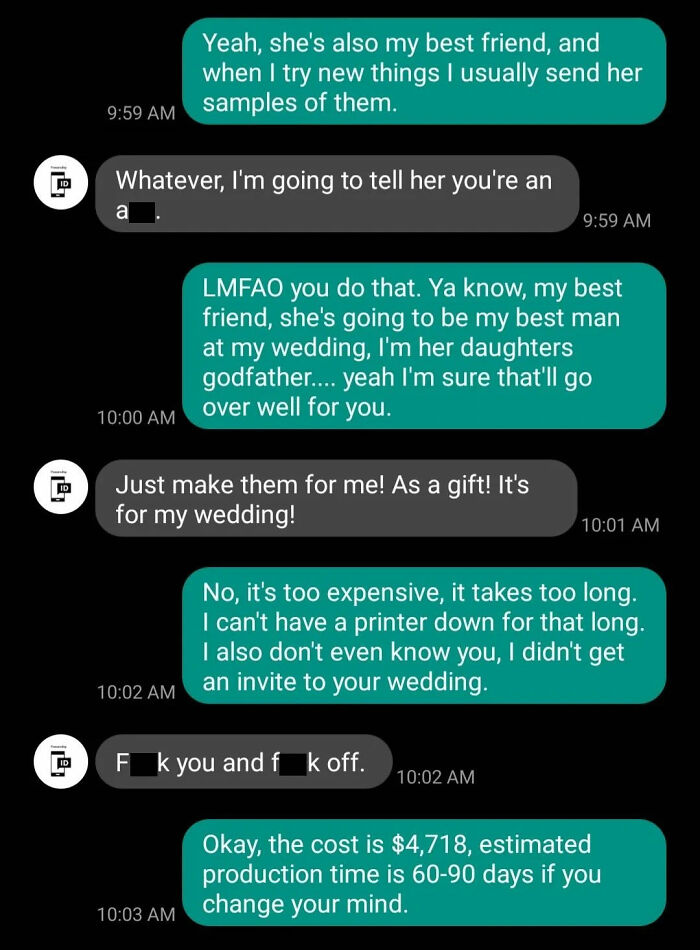 Now that you guys know what really happened, and when you’re down laughing in your own time, check this out:

A woman wants some stuff manufactured. She gives an order. She gets a rate for it. She says it’s a scam and demands for it to be done for free. Wow! This is some next-level shit right there. Conversations with such choosing beggars start very normally and end very abnormally.

What do you guys think about it? Like it fully enraged me to be very honest. I mean how on Earth could you possibly ask for something like a free wedding gift which actually has a cost behind it. Like sure, I’d gift you something that costs me no time and effort, a quick grab from a store nearby and we are good. But if you don’t know me and you ask me to make 250 customized items for you that require thousands of dollars of my own money, 56 of my precious days, and all my equipment locked up in your project not allowing me to take any new projects, no ma’am, I don’t think my efforts and investment will come for free.

The internet was triggered by this story. A very normal reaction once you go through it. Here’s what they had to say about it:

1. I swear, though the author is way too nice for the people of this planet.

2. Expert advice: The rate was justified.

4. I know right? The entitled approach literally sucks because it always puts them back to the ground.

5. OP tried everything they could to satisfy the bride but the bride had no plans to be satisfied, I guess. 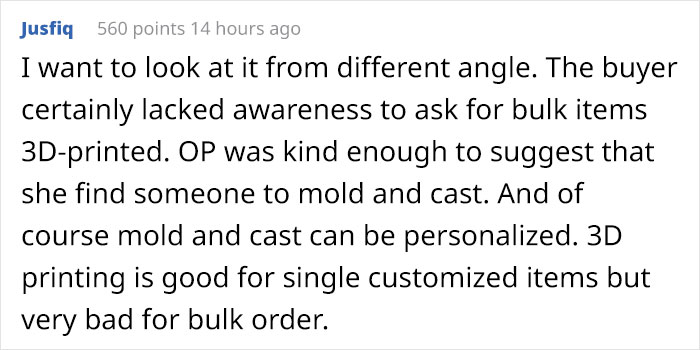 7. Yeah, to be honest, the bride was pretty dumb to not understand that they were being given a full-on 50% discount.

8. It’s Karen behavior. You wouldn’t know because you aren’t one. 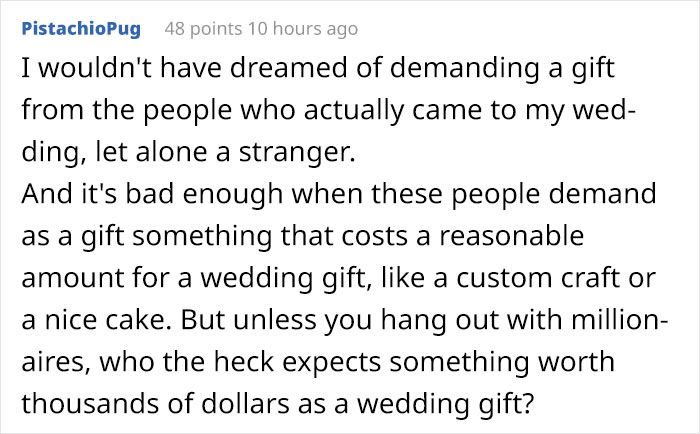 9. Many pointed out how patient OP was and that if it were anyone else, they would’ve snapped hard.

I would love to know your thoughts on this. How would you have dealt with such a situation? I have to say it, the way OP dealt with it, not everyone has that kind of patience that he did. Choosing beggars, man! They are a whole science that needs quite a lot of research in order to understand why they exist and why do they all behave in this similar, dumb, crazy-ass way? What is that drive? I would love some insights if you guys know anything about this.

The comments section is open for all sorts of inputs.