Having a child is a complicated process.

When you marry the love of your life, you both want to see a mini-version of the both of you. When you feel like you are ready to raise a child, you work towards expanding your family. You want someone to love unconditionally for the rest of your life. The whole experience can be very exciting, and it is understandable that getting to know the gender of your child must also be very thrilling. You prepare yourself for what’s to come since there are some things that are bound to happen if you are having a son or daughter. However, some people celebrate finding out the gender of their child by throwing a gender reveal party. Although it can be a fun process, some people tend to take it too far by overspending for just one day.

This man on Reddit ruined his child’s gender reveal party because his wife was planning on something very big and expensive. His wife is now mad at him and he asked the Reddit community if he was wrong for doing so. Scroll down below to read the whole story:

The man and his wife had a daughter previously and the wife wanted to make a short film as a gender reveal type thing. It was a very tiring and expensive process. 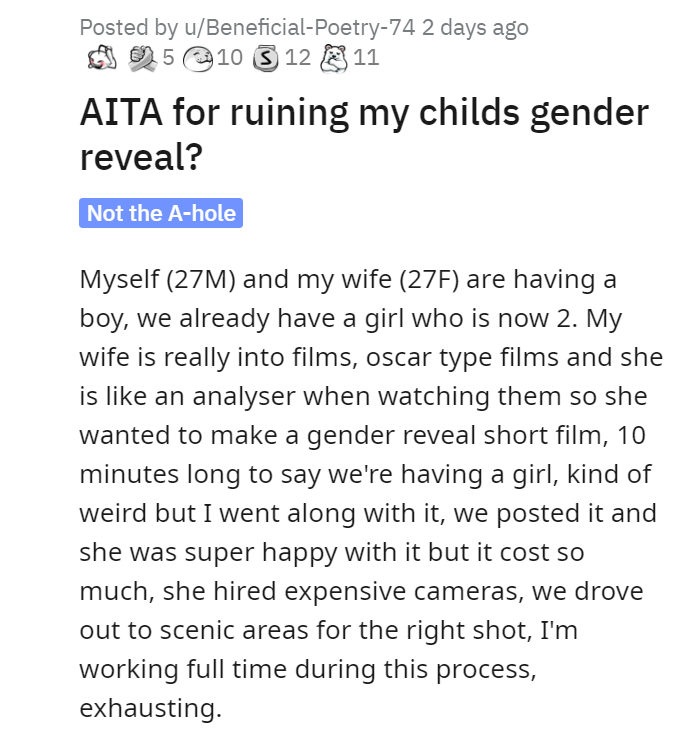 So when they found out they were having a boy, his wife started writing a script but the man just announced on Facebook that they are having a boy. He ruined the gender reveal party for her.

He thinks his wife’s demands are pointless.

The only reason he thinks he is in the wrong is that his wife is mad at him.

In my opinion, it was rude of him to decide everything on his own without even communicating with his wife about it. They could have just come to a compromise. He knew it meant a lot to his wife, but he did not even attempt to talk to her or decide something mutually. However, his wife is also going overboard with her hobby by spending £4k on just a gender reveal party, which is a little overboard if you ask me.

This is how other Redditors responded to the story. 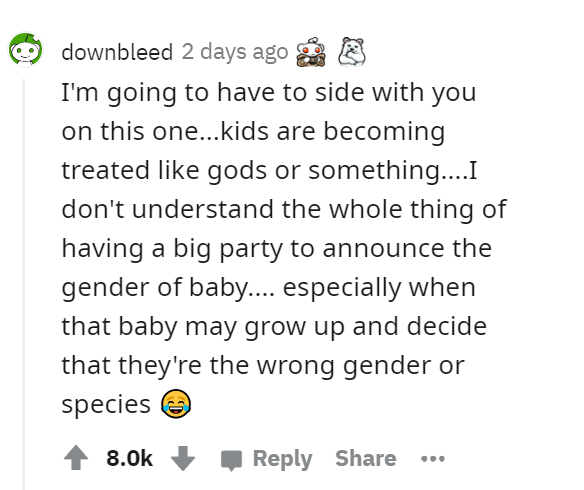 He should have at least talked to his wife first. 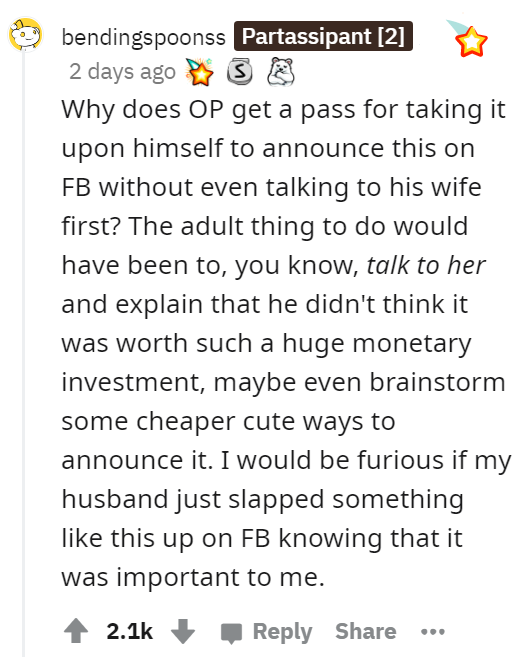 He handled this very immaturely. 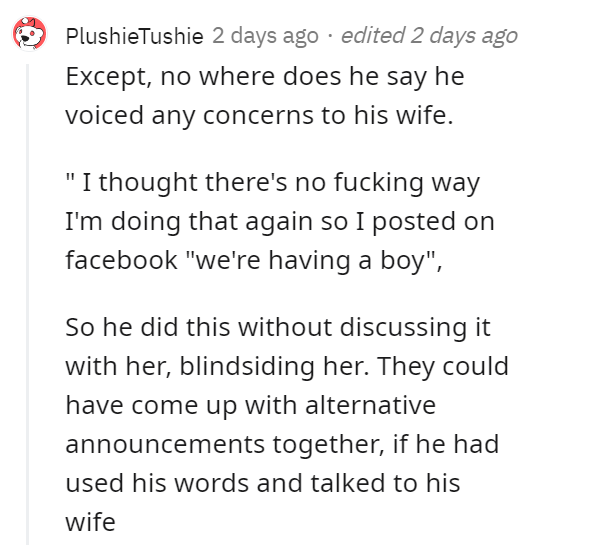 Yes, she was overspending. You could have just talked to her about that instead of completely ruining it. 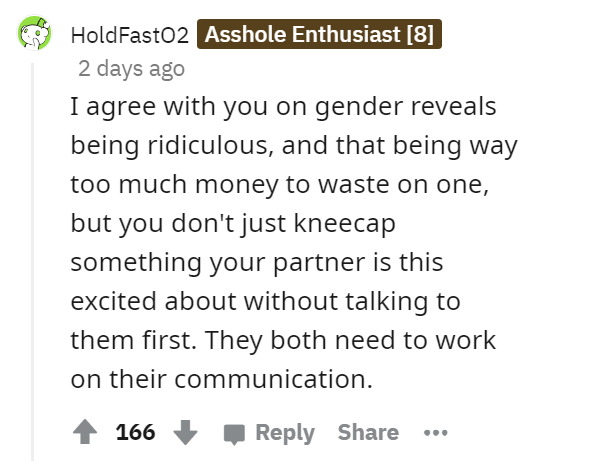 Everyone sucks here, in my opinion. 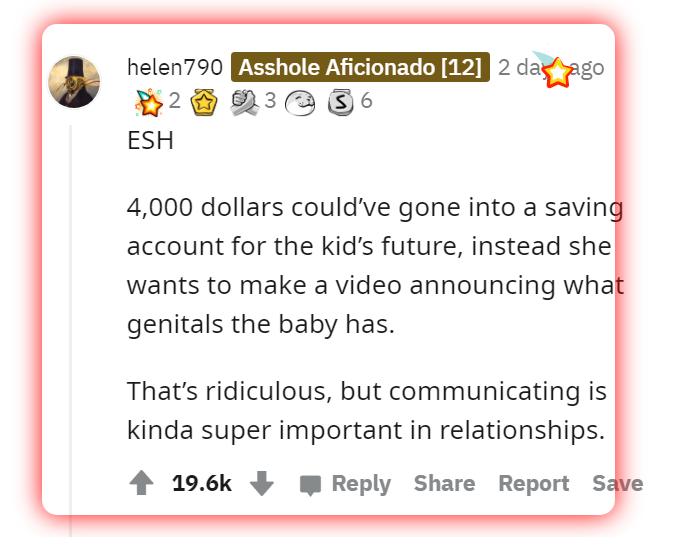 They need to work on their communication. 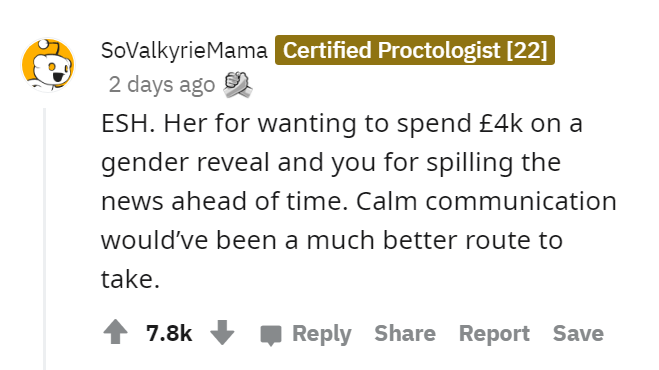 Maybe instead of putting this on the Internet, he should just ask his wife. 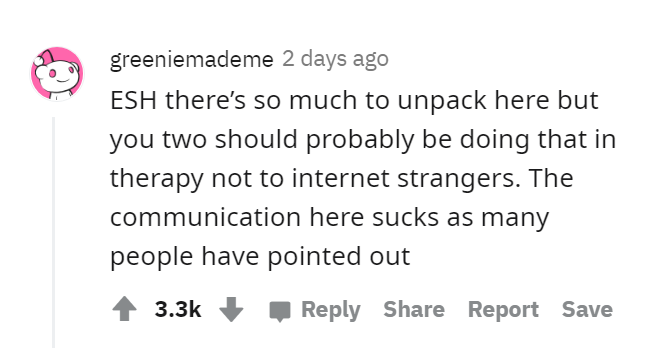 This person blamed the guy completely.

Who do you think is at fault here? Share your opinions with us in the comments below.