Everyone has a dislike for certain foods.

I don’t think there is one person in the world who is fine with eating everything. We all have our likes and dislikes. However, it becomes a problem when you can’t even go to a restaurant with your family and join in on their meal. And no this is different than having dietary restrictions or any sort of allergies. You see she is able to eat everything but just doesn’t like the taste of anything and she apparently subsists on only ramen and some fast food. Not only does this sound unhealthy but she is also not a kid.

So when her family asked her to go to a restaurant, she was less than okay with the whole idea. Even though her mother gave her the advice of just ordering chicken, she was having none of it and instead ordered something from Burger King. As you can probably imagine, this led to other people staring at her in the restaurant which sounds pretty embarrassing if you ask me. You can read the whole thing for yourself by scrolling below. Get ready for one heck of a weird story though.

She has apparently never been a big fan of most foods and doesn’t have a big selection. 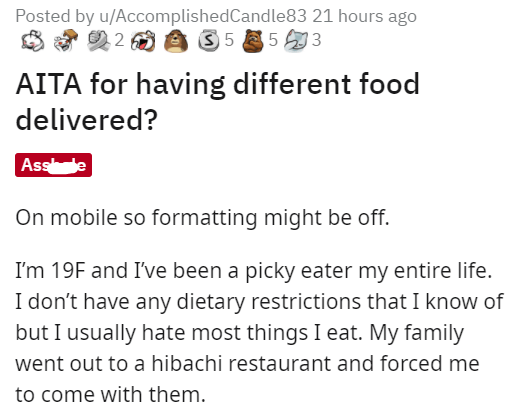 So she normally doesn’t go out for family dinners at all. 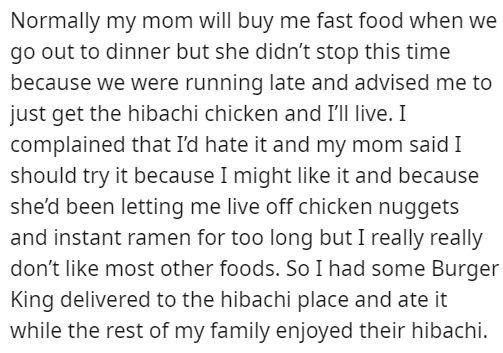 She does explain how she doesn’t have any sorts of issues so she is just a picky eater. 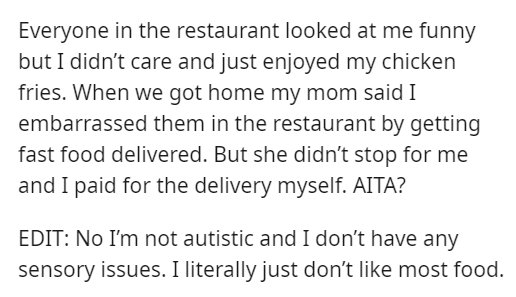 This wouldn’t have been so bad if she had actually tried the food. It isn’t like she is vegetarian and her parents are forcing her to eat meat. She doesn’t have any sorts of allergies so what she did was pretty childish and nothing can change that. And she isn’t a kid either so it just makes it worse.

Most people in the comments weren’t on her side at all and called her out. 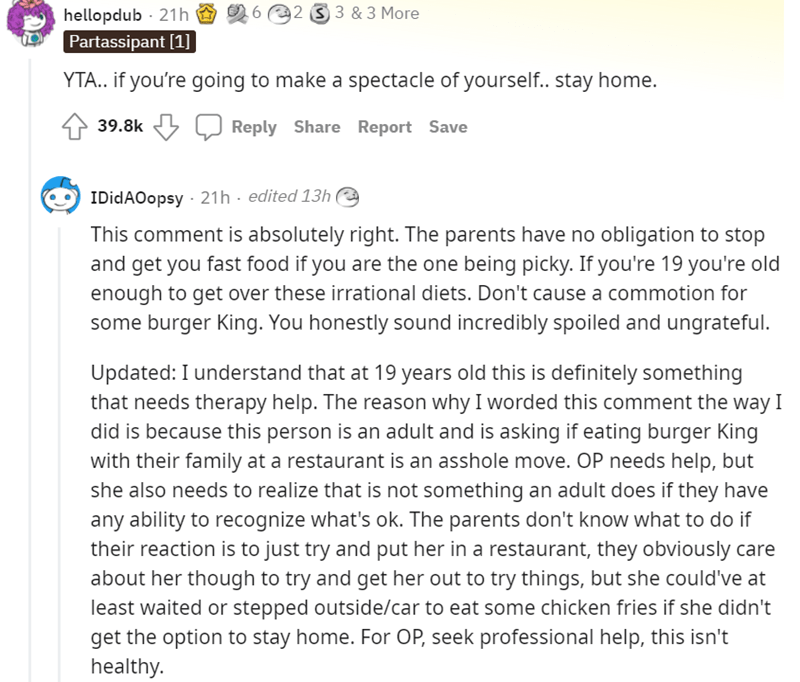 And told her that she was just being disrespectful towards her family and the restaurant as well. 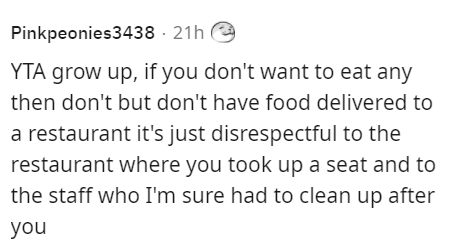 Honestly, the whole scenario sounds really embarrassing and I could never do this sort of thing.

It isn’t as if she is ‘unable’, she chooses not to eat anything. 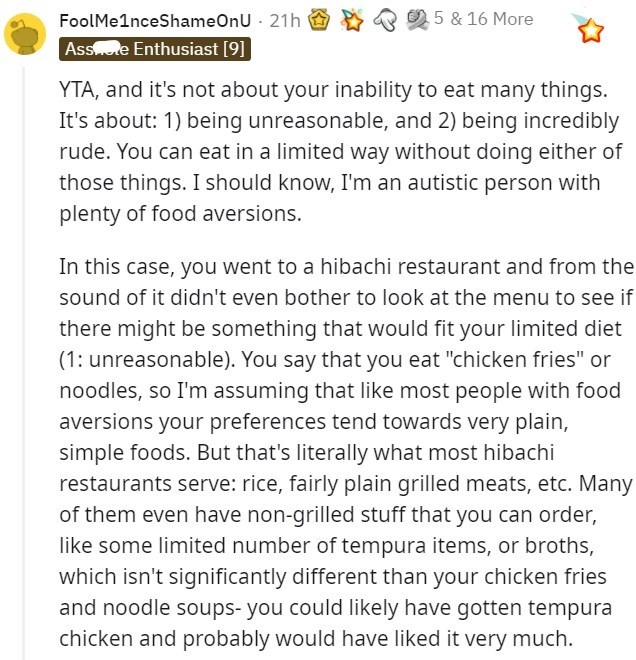 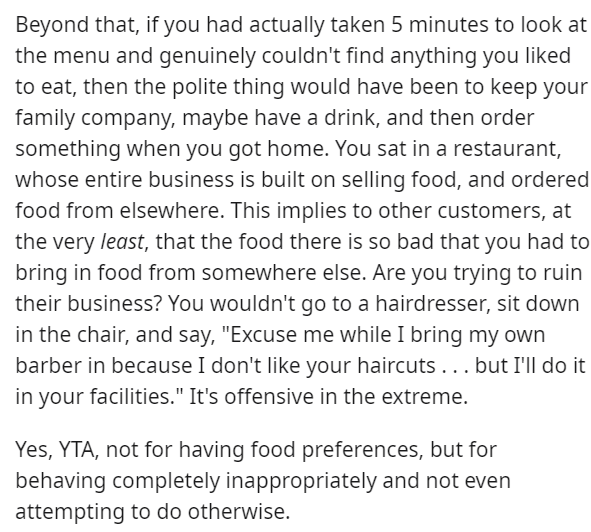 OP isn’t autistic though and has no eating disorders or sensory issues. She just hates most food by her own words. Which sounds childish as hell when it comes from a 19-year-old with no actual issues but actively hates all food other than chicken nuggets and top ramen for no other reason than “reasons”. –GI-JUGG

I am surprised to see this as well since most restaurants don’t allow outside food at all. 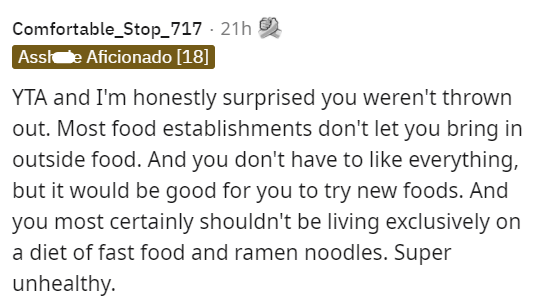 But she apparently didn’t see

I can see why her family would be embarrassed by her behaviour because it is pretty bad if you ask me. 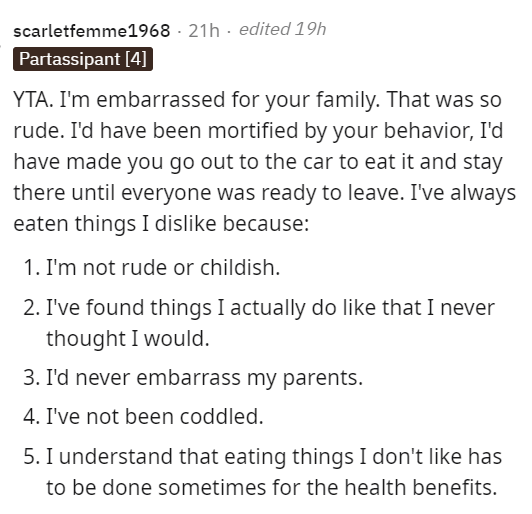 This is a very good question because she acted as if it was gonna be bad without even trying it beforehand. 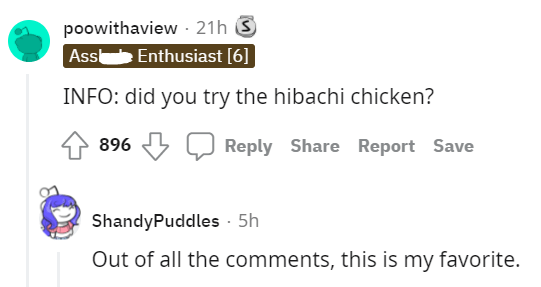 What would you do if your family member did something like that? Would you be embarrassed or would you simply ignore them? Comment down below and let us know.