Nobody likes a snitch.

That is what we have been taught since we were little. Even if something an individual is doing is morally wrong, you have to stay ‘loyal’ or you become a bad person. That is just how the world works. But morality and doing what is right should always take first place. And if someone doesn’t understand that, then one deserves better friends or colleagues. The reason we are talking about snitches today is because of this story.

When any person catches someone spitting in food, they would usually call them out. Especially in this day and age when covid-19 is running rampant and this is a serious health risk. That is sort of what this person decided to do and told the manager. However, apparently, their honesty wasn’t appreciated, and rather than firing the person who caused the problem, they let it go. Although it is somewhat more complicated than that and you can judge for yourself who was wrong by scrolling below.

The day started out as any other with the exception that it was quite busy.

And this was clearly taking a toll on all the servers. 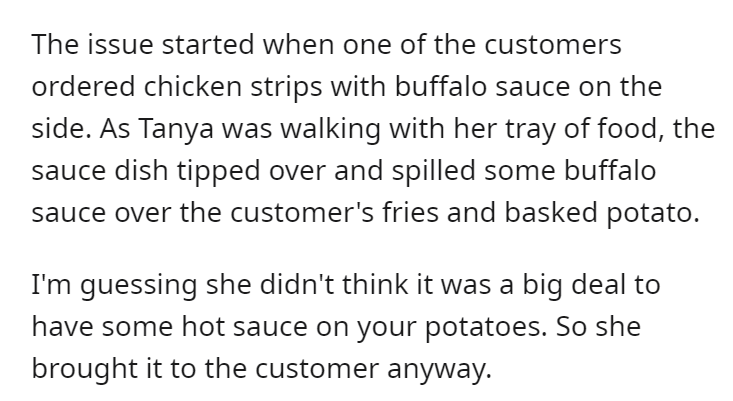 Particularly one server who was making a fuss about everything.

But then she took things a step too far and actually spit in a customer’s food. 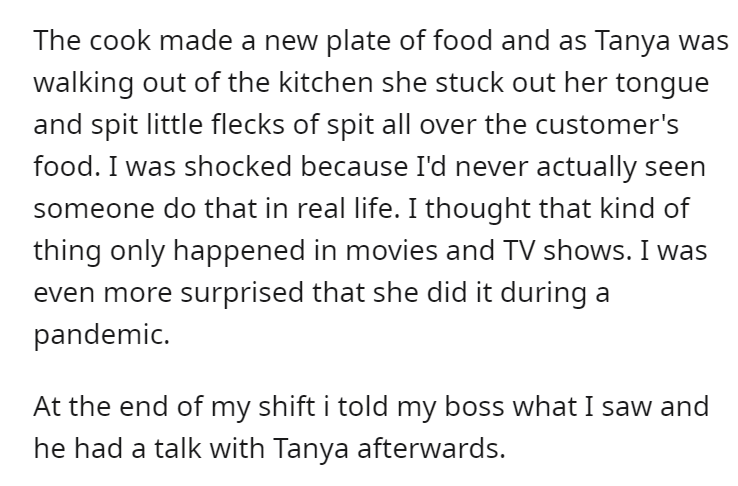 Rather than stopping the food from going out, this employee told the manager later on. 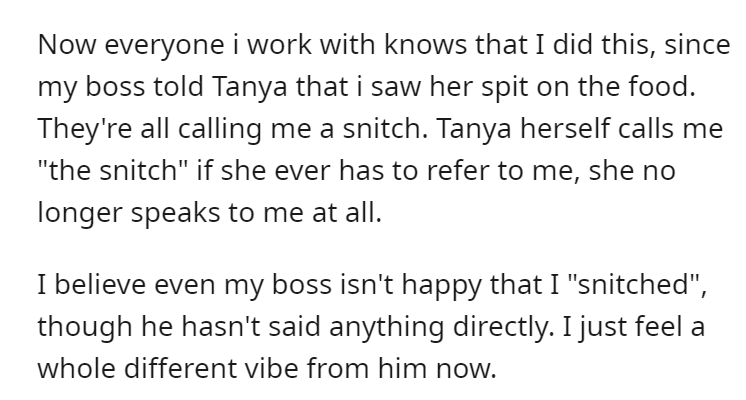 Which led to a hostile work environment for him all around. 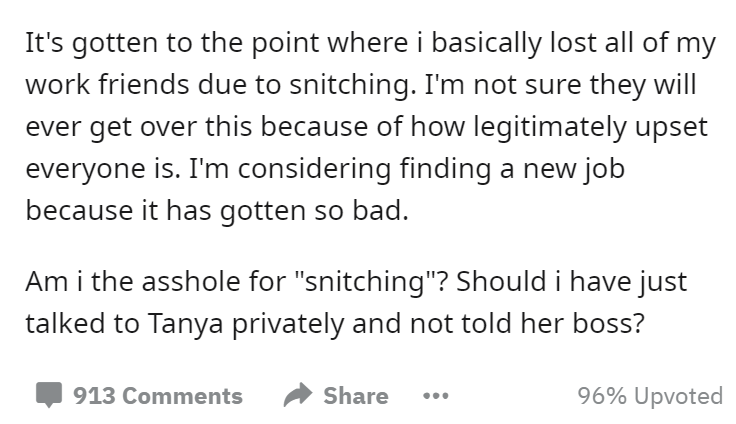 YTA for letting her still serve that food to the customer. That is messed up. You should have stopped her from giving them that food or if needed, even telling the customer what she did.

NTA for reporting her. That is gross (even if there isn’t a pandemic). When you eat out, you are trusting your server to be professional and respectful and if they are spitting in your food, they should not be allowed to work there. –TheABCD98

People in the comments were a bit split on this. 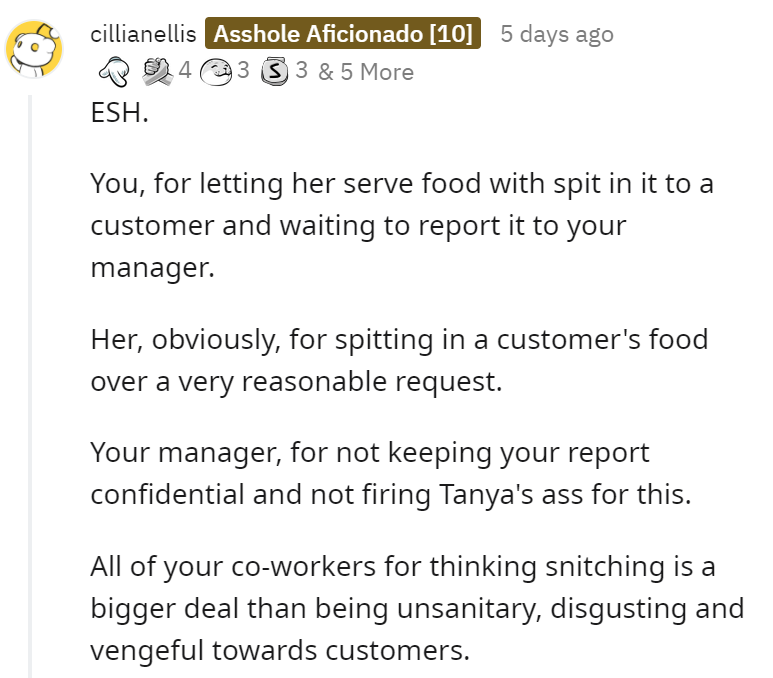 As many said nobody is without fault in this particular instance. 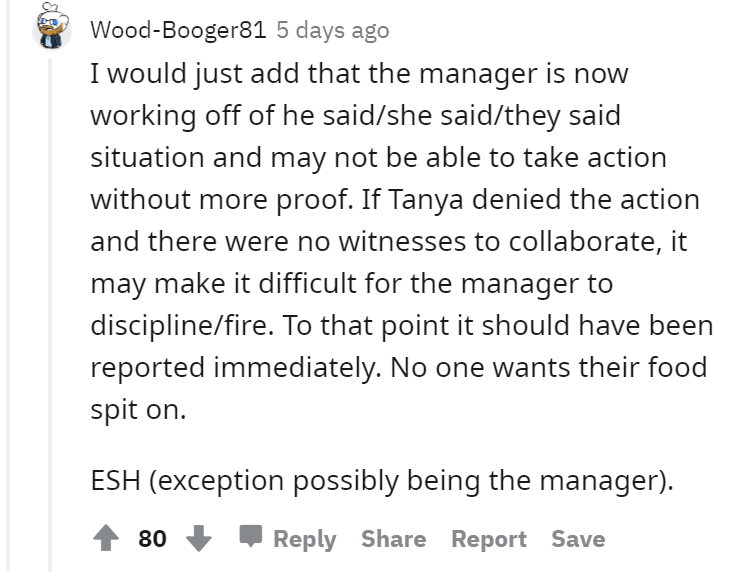 He should have stopped the spit-riddled food from going out in the first place. 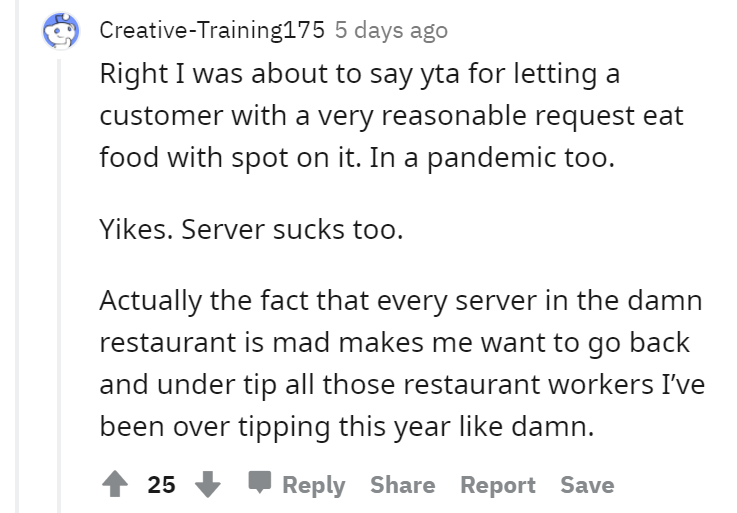 But what he did was too little too late. 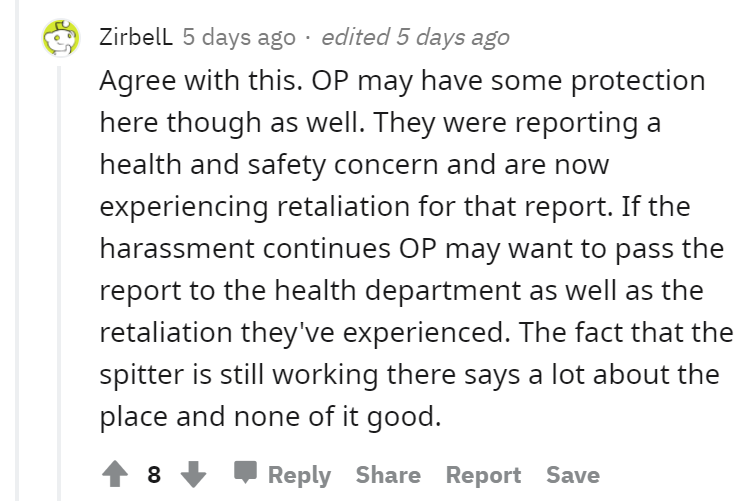 But the manager who isn’t taking this seriously isn’t guilt-free either.

ESH – your boss and coworkers are all a**holes. Spitting in food is not only unsanitary but also a HUGE liability to the restaurant. You could have stepped in and not let Tanya serve contaminated food to the customer, despite the customer being “difficult”.

Your boss shouldn’t have thrown you under to Tanya and has created an even more toxic work environment for you by doing so. They all have no reason to retaliate and be upset at you. Document everything and start looking for a new job ASAP. –cashycallow

All in all, nobody seems like a saint and everyone needs to do better. 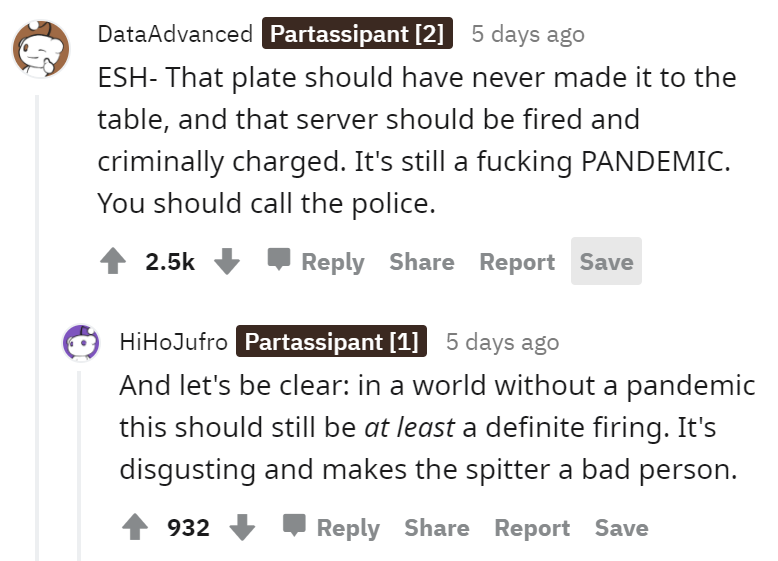 What are your thoughts on this story? Do you think she should be fired? And should he find a new job as well? Comment down below and let us know.