Dating has evolved over the ages.

Long gone are the days when you had to physically meet someone and take your time to ask them whether they were interested in a date or not, or just going out with you in general. In the digital era, dating has become far more reachable than it was ever before. With the sudden boom of dating applications such as Tinder, Bumble, etc, finding someone to date is more accessible for everyone. Online dating has made its mark in the current age and it has made everything easier.

But just like in real life, you can come across people who would exploit the date or exploit you for their own benefit and catfish you into doing something for them without you getting an actual idea about what’s going on. People like this don’t really care about companionship and their definition of fun is usually using someone. Twitter user minilogo37 shared his story, in which he was manipulated into buying food for his date but it didn’t go well for them.

He signed up for Tinder and immediately received a super-like by this girl who he thought was cool. 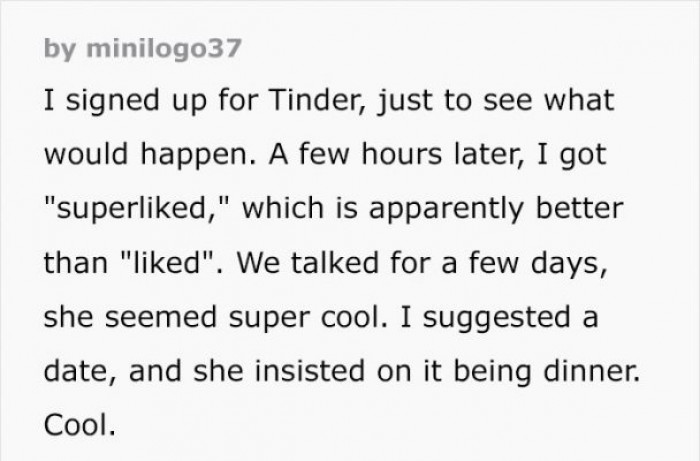 His date didn’t even seem like she was into the date and some of the red flags were very apparent.

She kept ordering more and more food from the main course menu and he began to see that this wasn’t a “date” in the first place.

He got fed up with all of this and went straight to the restroom, where something clicked his mind.

He went straight to his car and drove home, and let Karma play its role in the best way possible. 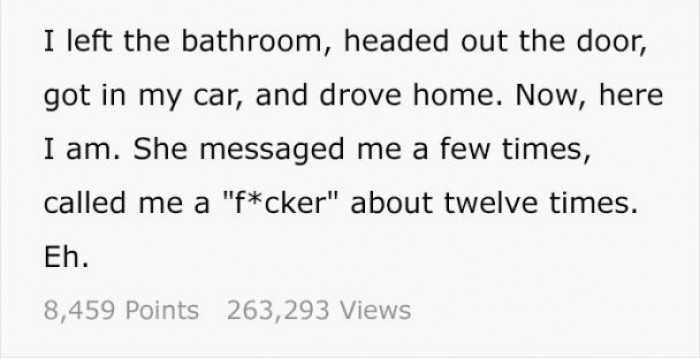 I think he did the right thing. They both agreed on a mutual date and she acted absurdly, making the poor lad pay for everything while she munched on all of the food. He wasn’t obliged to pay for the whole thing. The woman tried ripping him off and felt entitled to free food which is wrong on a whole different level.

This is what people on the Internet had to say regarding this story.

This internet user congratulated him for not falling into her trap.

Why is it normal for just the guys to pay for the date?

Who do you think was right? Do you think whether it was a rude move for the guy to ditch her like this or do you think they should have split the bill? Let us know in the comment section below.