Everyone has the freedom to make their own choice.

As long as they are not hurting other people. And while some people may not agree with a choice, that does not mean they can force their values upon someone else. However, that is exactly what many do. Don’t get me wrong, I do not condone pregnant women having alcoholic drinks because as we all know that is very bad for the baby’s health.

Although tricking someone and serving them virgin cocktails isn’t that great of a decision either. I can understand that the waiter didn’t want to serve a pregnant woman cocktails but he had no right to lie to her. You can read the whole story by scrolling below and taking a look.

You’ll soon learn why almost no one is supporting the waiter in this story.

It may seem like a good idea but he went about it the wrong way. 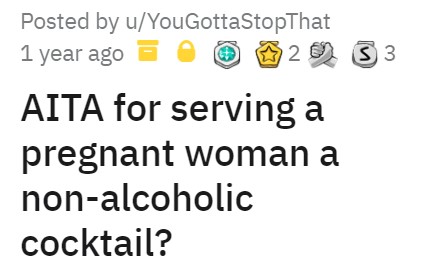 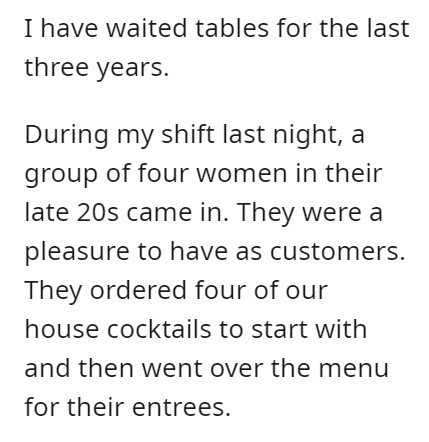 So he was basically eavesdropping? 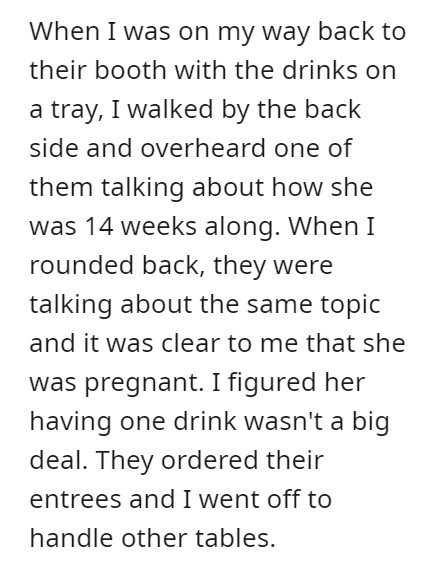 And you even included your friend in this? Things just keep getting worse. 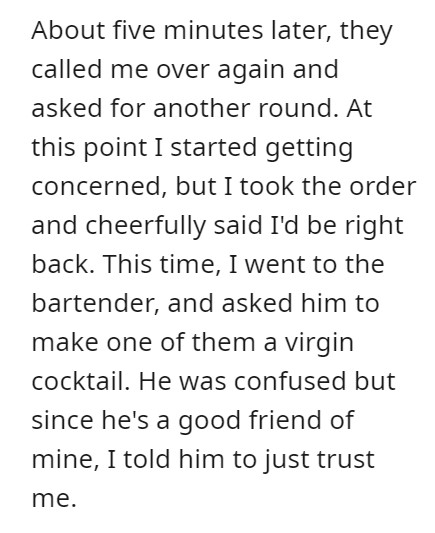 Aren’t virgin drinks cheaper than regular ones though? 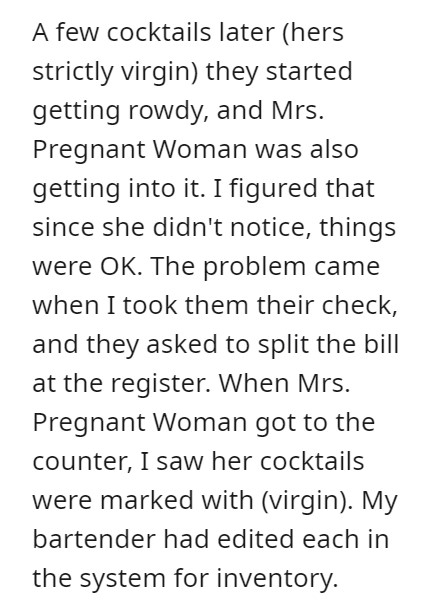 At first, it seemed like he had gotten away with tricking her but we all know how these things end. 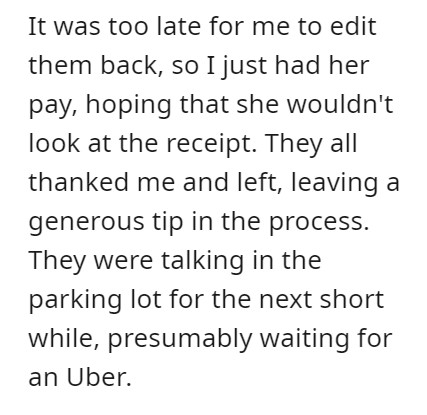 It is clear that he had no idea what to do next. 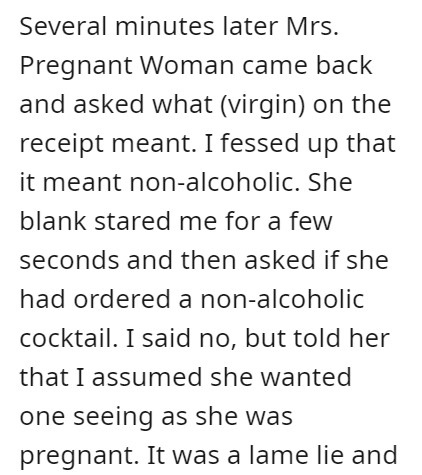 I can understand where your manager is coming from though. 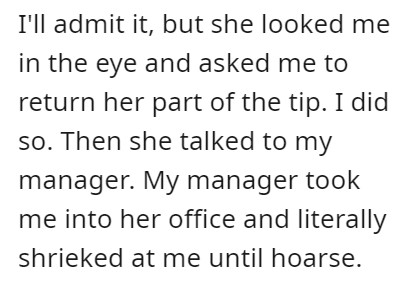 It was the woman’s choice, not his. 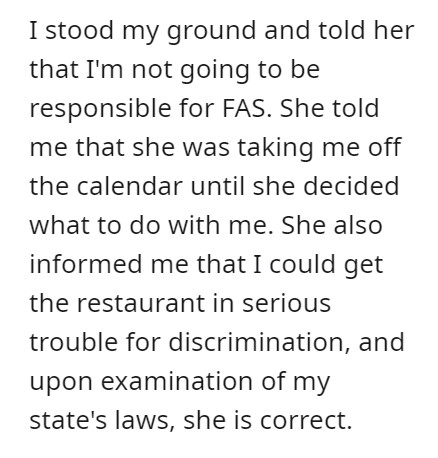 Tricking someone is never the right choice no matter your intentions. 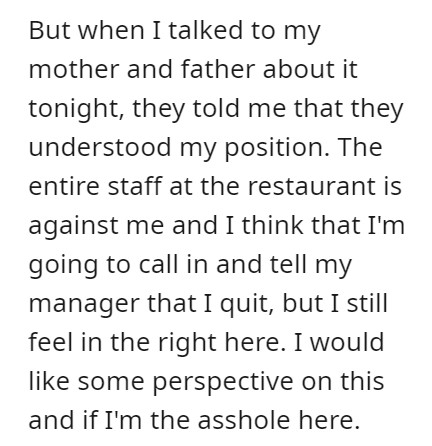 Exactly! He doesn’t even know for sure. 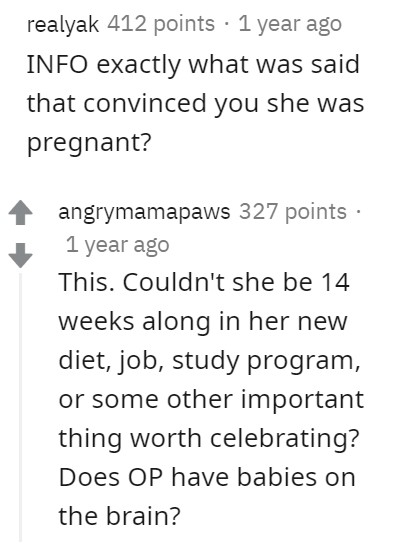 If he was so worried, he should have just asked. 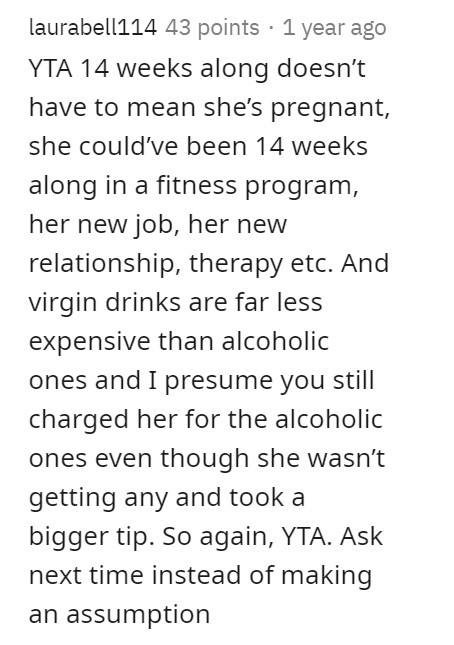 The secretly changing the order is what I think gets me here. That’s like ordering a burger, the server sees I’m very overweight, and secretly changes it to a veggie patty without telling me.

I’d be pissed as HELL that the server thought s/he knew better than me what I should and shouldn’t have, made the decision themself to decide I ‘wasn’t allowed’ to have the real burger, and they thought they were smart enough to trick me into consuming and paying for something different than I ordered (and subtly shame me for being fat).

I’d still be pissed if they thought their own judgment/views came before mine and refused to serve me and got the manager instead, but trying to trick me is going way past the line. –mrskontz14

Simply don’t serve her rather than lying to her. 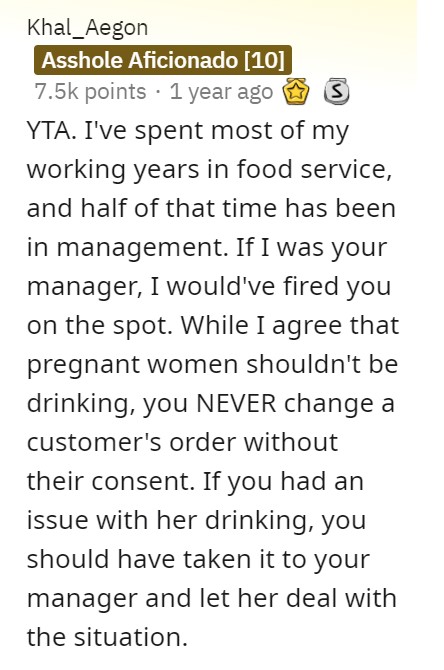 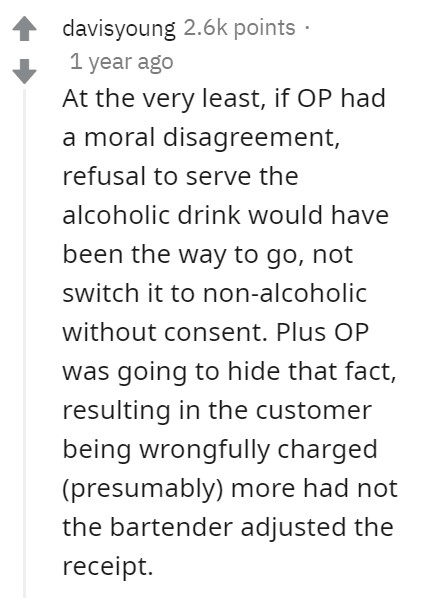 The woman doesn’t suck for obvious reasons. OP didn’t actually know for sure that she was pregnant, no matter what they thought they heard. She may have been talking about a past pregnancy (or worse, past miscarriage), someone else, a surrogate carrying for her, or even just a play in which she was acting as a pregnant woman.

And even if she WAS pregnant, she may have been planning to terminate soon. IF she was pregnant, for all OP knew, the woman was going to have to terminate a wanted pregnancy due to fatal fetal defects, the woman’s friends took her out to make her feel better, and the OP came along and made her feel worse. –torchwood1842

The right reasons don’t give him an out on this one. 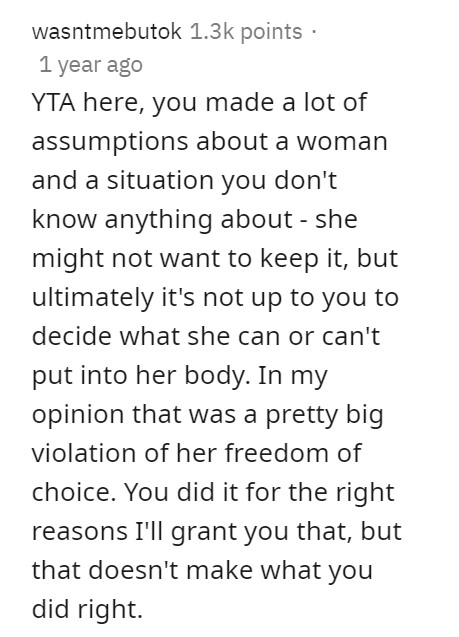 What are your thoughts on this? Do you think he was right to do that? or should he have tried a different approach? Comment down below and let us know.