It is not right to ignore a person when you are a salesperson.

Most women can relate to the fact that some salespeople tend to ignore them even though they might be buying that specific item for themself or maybe the decision-maker in the family. And this especially holds true when it comes to things steretypicaly associated with men like cars or anything to do with computers. I know I have personally been on the wrong end of this interaction several times and the salespeople are only shooting themselves in the foot when they do this.

I mean if one doesn’t respect their prospective buyer, what is the chance that they will get the deal they are looking for? Well, that is exactly what happened when this sales guy decided to ignore the wife completely and only focus on the husband. What he didn’t realize was that they were going to use this against him. You can read the whole story by scrolling below.

This sort of thing happens all too often which doesn’t make any sense. 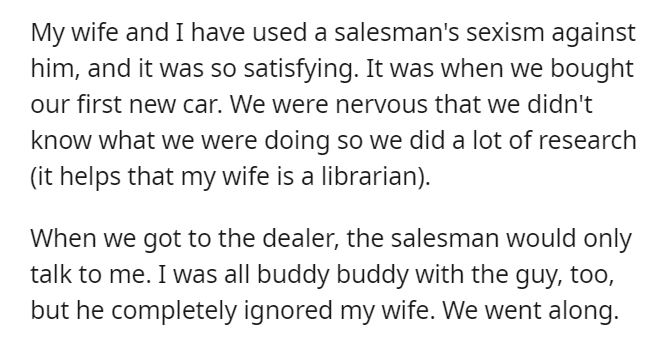 According to statistics, more than 50% of car decisions are made by women. 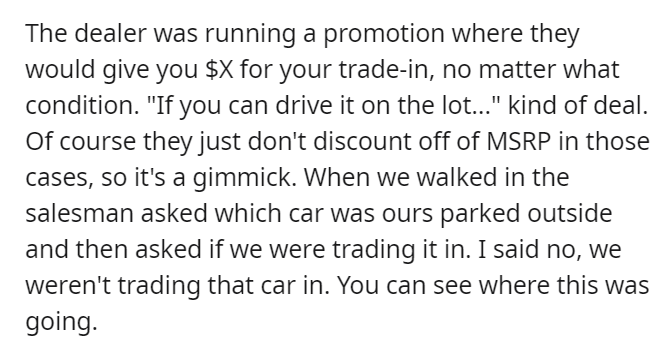 The sales guy hadn’t realized they wanted to trade in a car so he started scrambling to set this right. 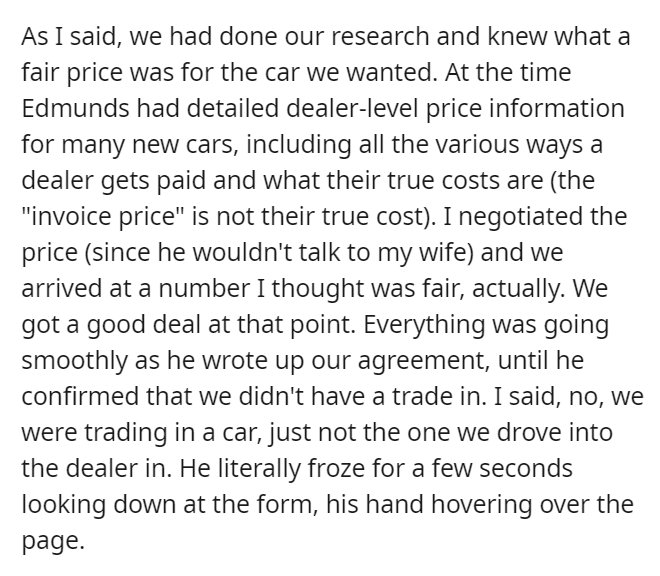 It might be sleazy but that is how they usually make money. 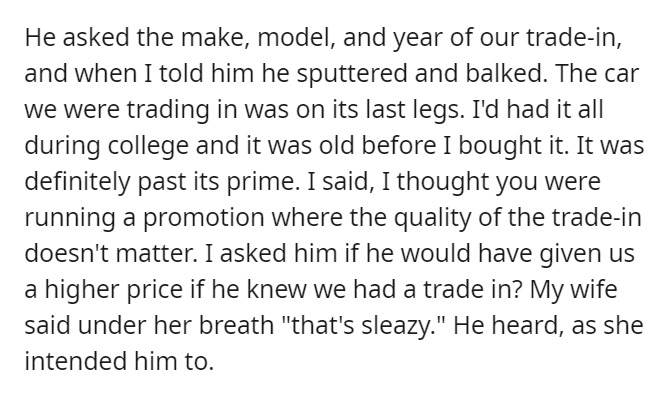 At that moment, he came to the realization that he made a big mistake not talking to the wife. 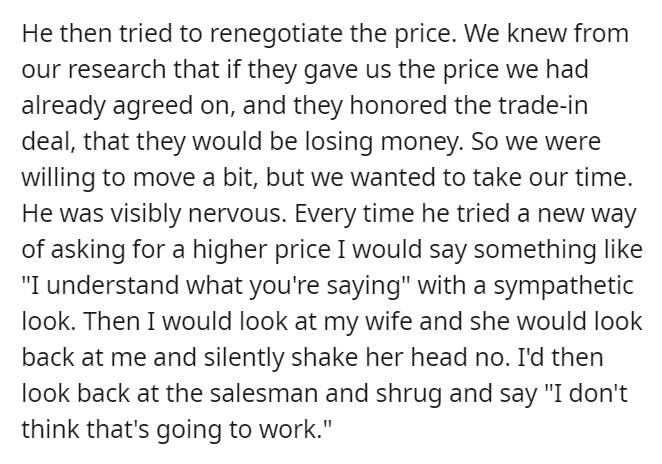 After all, he couldn’t suddenly start talking to her.

But at the end of the day, their team-up worked and they got a pretty fair price out of the deal. 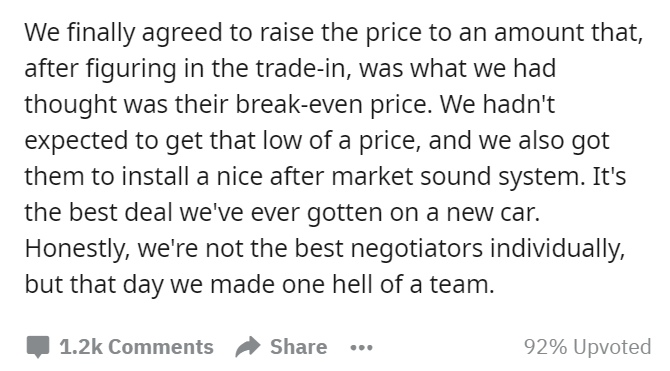 The silent head shake was everything and just what he needed to see. 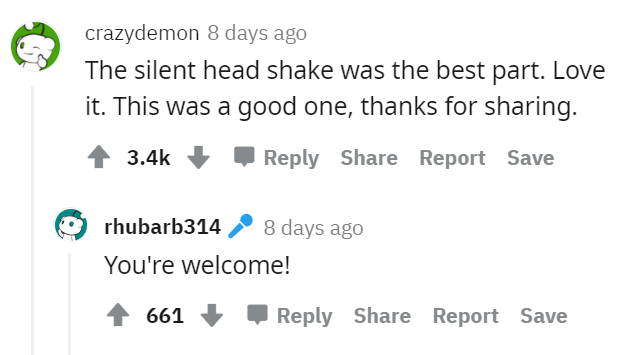 You never know who is going to be spending the money. 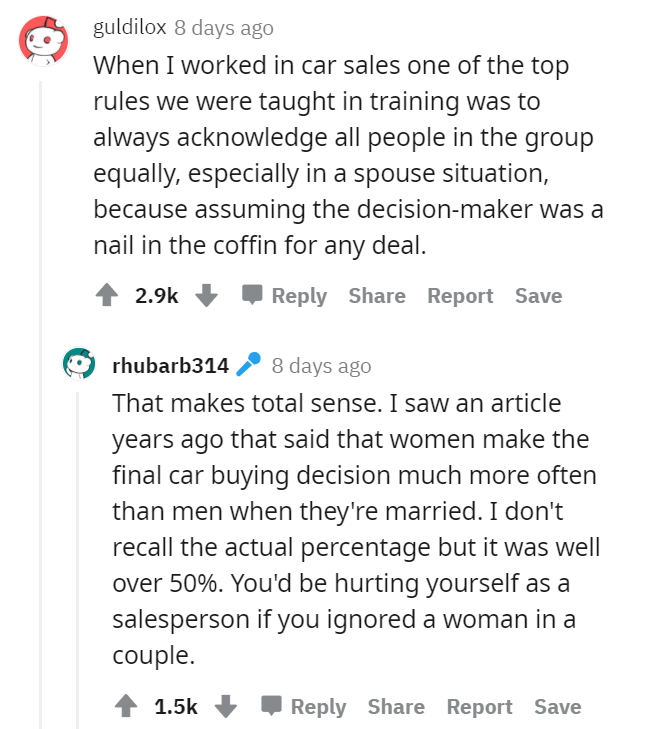 Just treat everyone with respect, it really is that simple. 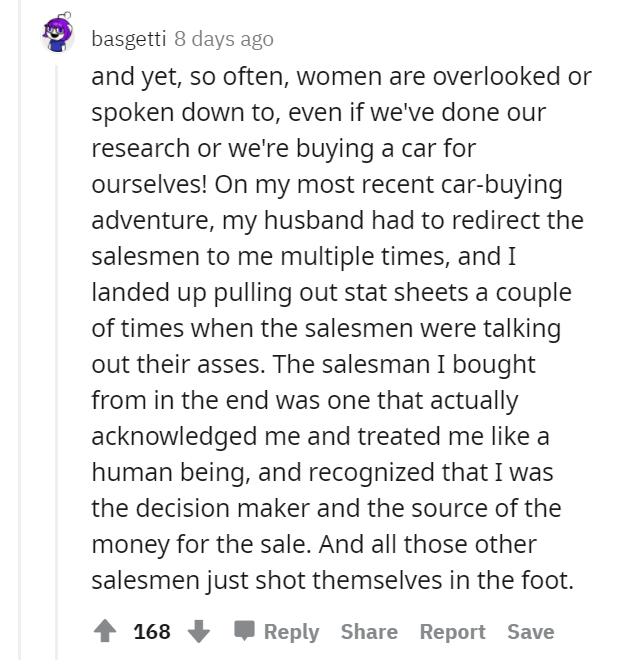 Well, usually people do care if their dog will be comfortable in the car. 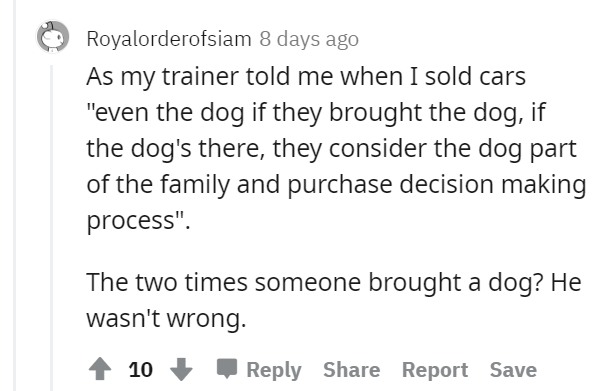 It seems like a small thing but it can make a huge difference. 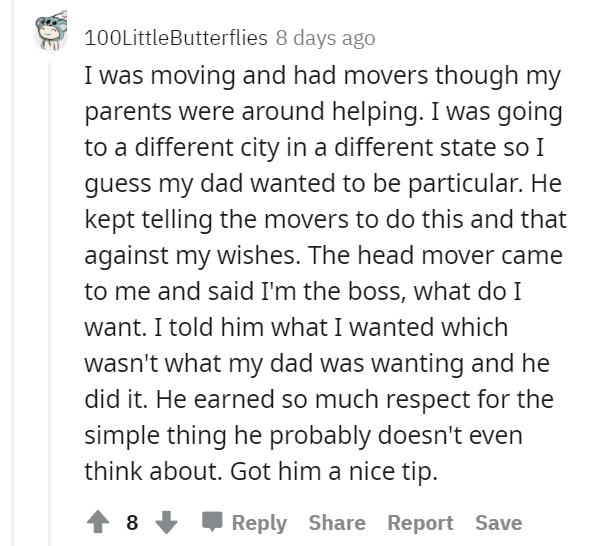 I found out that my mom was the best negotiator when we went to buy my newish (lease return/ex-rental) car from a dealer. I had gone with my dad and it didn’t work too well. Two stubborn guys didn’t have enough material to work with.

But my mom was an artist. I would talk to her (completely ignored the salesman) trying to convince her we should probably go back to the purple one (at a competitor) because it was cheaper.

She would take the salesman’s side and go but this is a really nice blue and the other one has more miles.

I would hit back with. It’s not much more miles and Purple is a good color too. But of course, admit that I do like the blue better (but except for the high price).

And we would go back and forth until she finally agreed with me (with a “but you’ll probably regret it”) and we start getting up to go back to the other dealer.

Got the blue one for less than the purple and mom got taken to lunch as a thank you. –algy888

From what I can see here, it is really hard for some people to acknowledge women. 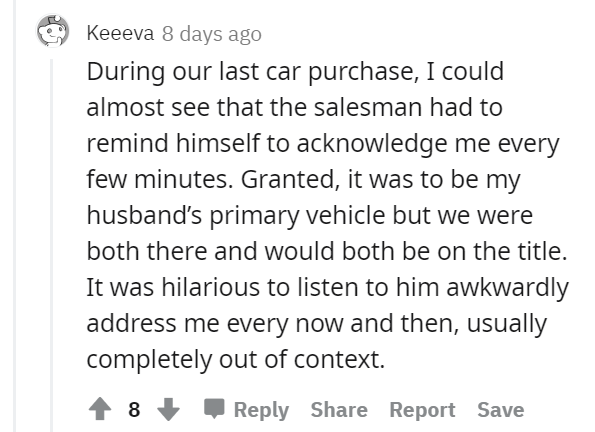 And nobody wants that particular kiss. 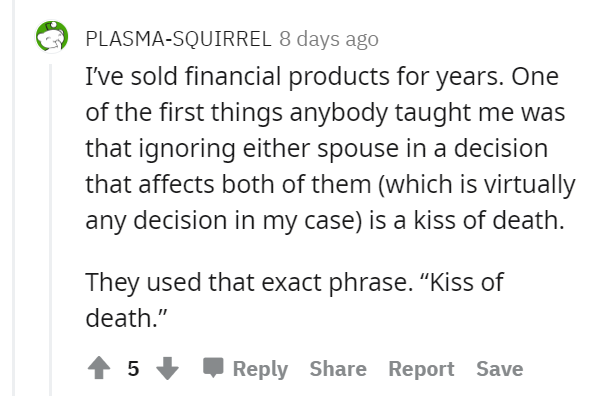 If only he had been nice and upfront from the start. 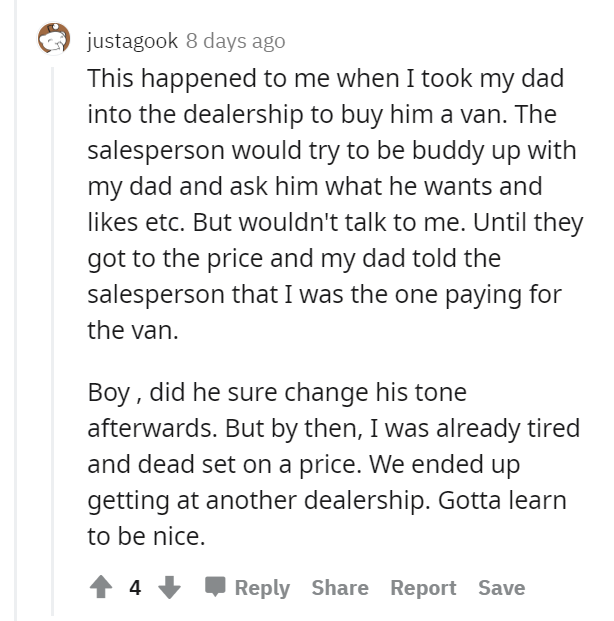 This might teach him a lesson and he may not do this sort of thing again. 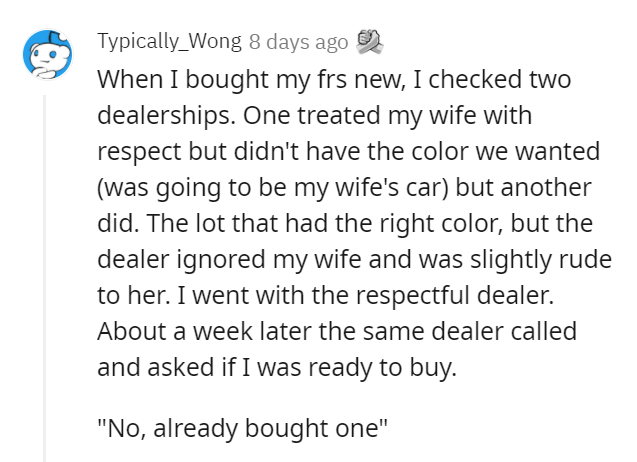 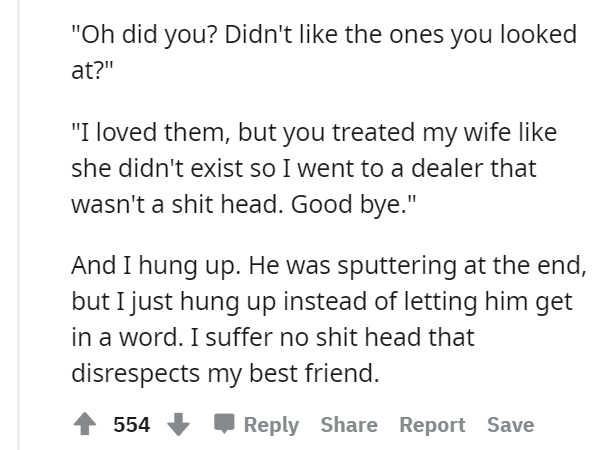 My husband needed a new car, but because my credit is considerably better, I was purchasing it. We didn’t tell the salesman this, and as usual, the dude talked to my spouse the whole time and ignored me. We both did a test drive even tho the sales guy balked at the idea of me wanting to drive it. When it came time to discuss the details, the same thing ignored me completely.

The dude made us(hubs)an offer and my man said, “I don’t know why you’re talking to me, she’s the one buying the car. But since you don’t seem to be interested in selling to her, I’ll be surprised if she does.” He turned beet red and tried really hard to recover but knew he’d fucked up. Completely ignoring the sales guy, I said “yup, I’m sure we can find someone else who actually wants to sell me a car” and got up and left. –lisabetsey

Has anything of this sort ever happened to you? If so how did you manage to deal with it? Comment down below and let us know.