Taking care of children is a full-time job.

No matter what some people say. Being a stay-at-home parent is a full-time job that can become even harder if you are working and/or studying as well. Most people love to preach about having kids is a blessing and how it’s all sunshine and rainbows. However, that is not at all the truth and that is not to say being a parent isn’t rewarding. Although everyone loves to omit all the hard times they go through and all the sleepless nights that come with being a parent.

Not everyone is fit to be a parent and that is totally fine. Nobody should be forced to have kids just because that is what society expects of them. This is exactly the reason why there are so many single parents in the world. People have kids just because that is what their parents want from them but then realize they were not ready after all and are thrown in the deep end. So what this woman did was actually quite genius.

She decided to shadow her friend who has four kids for a few days just to see how it is like.

Jill wanted to see what it was like to have kids before she took the plunge. 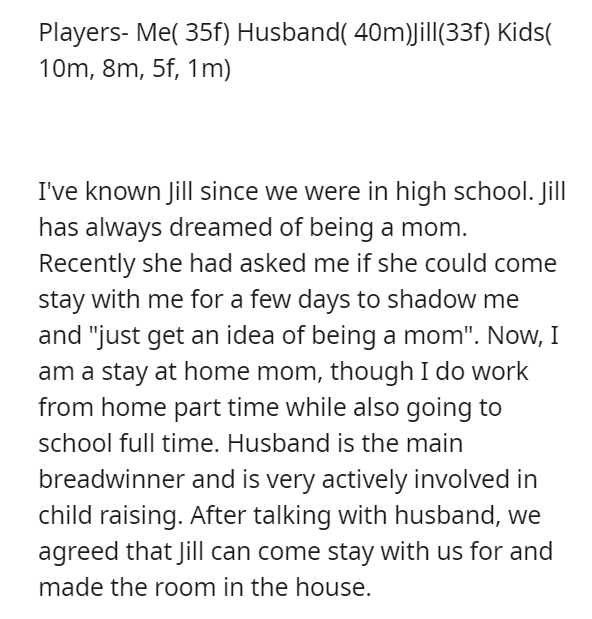 However, apparently, she wasn’t ready for what was coming next. 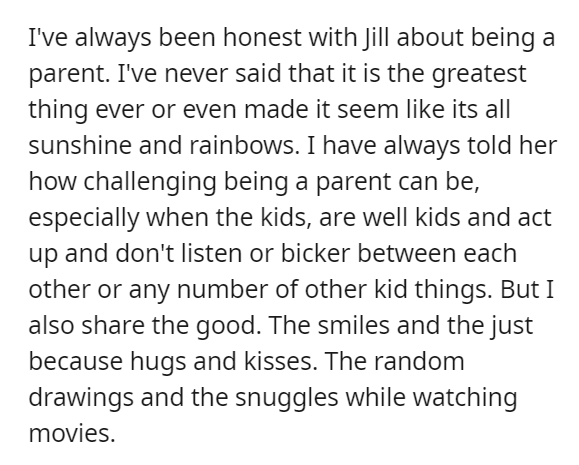 Jill thought it would be easy. After all, so many people do it, how hard can it really be?

Jill was in for a rude awakening as she didn’t quite understand how taxing it would be emotionally and physically. 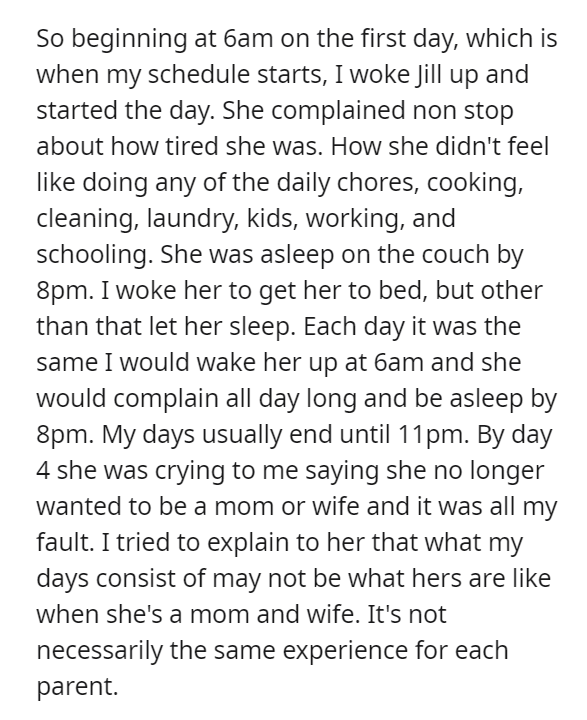 And now everyone from Jill’s family hates this woman for showing the ‘truth’ to her. 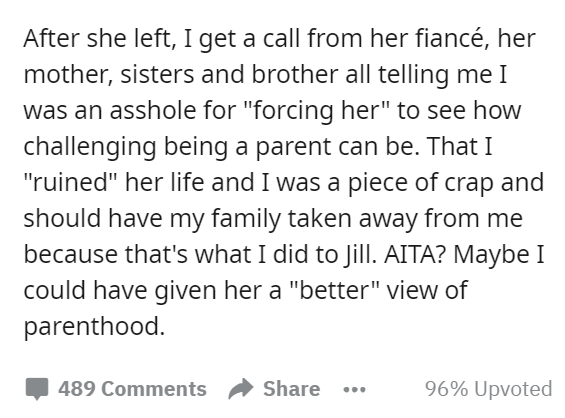 LOL of course NTA I am childfree for a lot of reasons, but one of them is that I SAW with my own eyes how hard it was on my mum and dad. But especially my mum. And as a woman, despite 2021 being better than the ’80s, it’s still mostly the women doing the boring work with kids and dads enjoying the “kodak moments”. And I honestly don’t want this. I think there should be a course in school about the harsh realities of being a parent. So only the motivated ones would decide to do it and fewer teenage kids wanting the “pretty baby smelling like baby powder and giving cute smiles”.

Nope. Baby eat and puke and shit on top of being cute sometimes. That’s the reality. –smegheadgirl

Not everyone will have the same experience but it is always good to get an idea of what you are in for.

Jill clearly didn’t know what being a parent is actually like even though she is thirty years old herself. 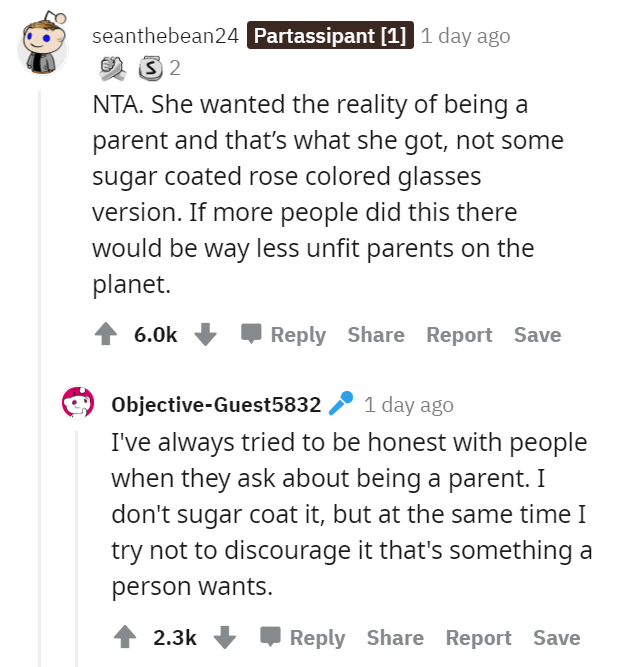 If only every person did this before deciding to have kids, overpopulation would be a thing of the past. 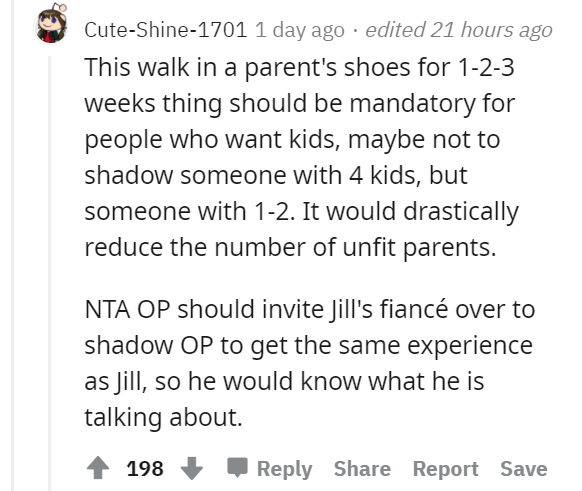 Many think that saying ‘parenting is hard’ somehow makes them a bad parent but it doesn’t. 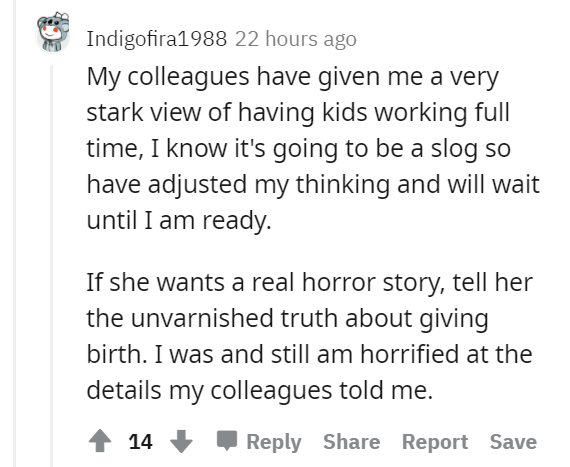 She asked for the truth and she got it. What was she expecting? 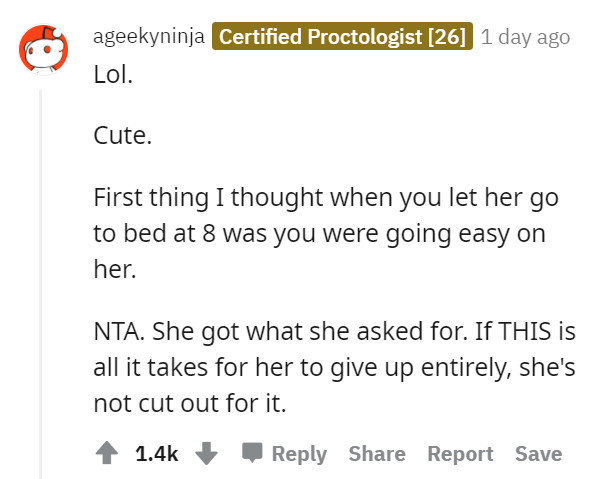 Her family clearly just wanted her to become a mother as soon as possible and this is why they are angry. 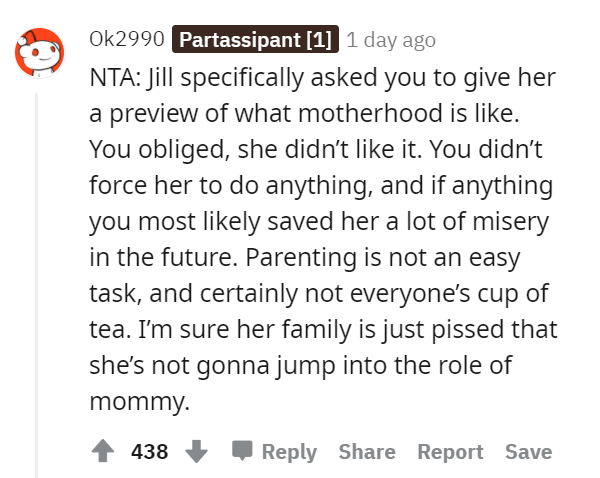 It might come off as weird but it actually quite an intelligent decision and everyone should do this. 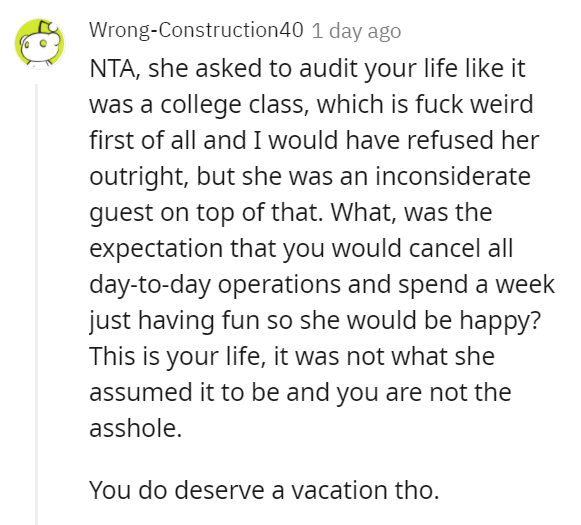 Hope for the best possible outcome but be ready and prepare for the worst. 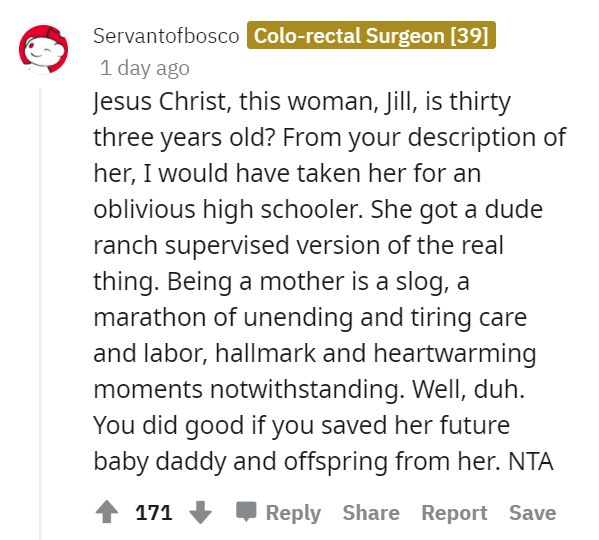 Her rose-colored glasses just got shattered and she couldn’t handle it. 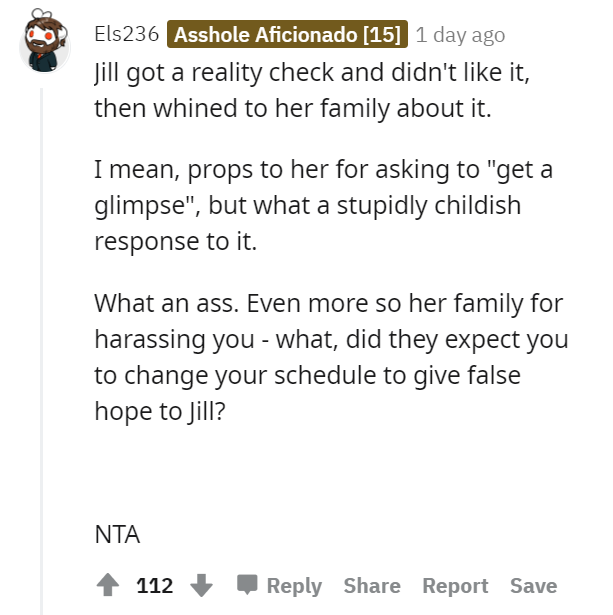 NTA. More people need to be honest about raising a child. It’s one of the hardest jobs to do (in my opinion) – you can’t just clock off and be done with work. Plus it’s a minimum commitment of 16 – 18 years.

If your friend can’t handle 4 days of being a babysitter then she has a long way to go before becoming a parent. What is she going to do if her kids have disabilities or illnesses? –rhyleyrey

She might not want four kids so her experience will definitely be different so she shouldn’t take it all like it is. 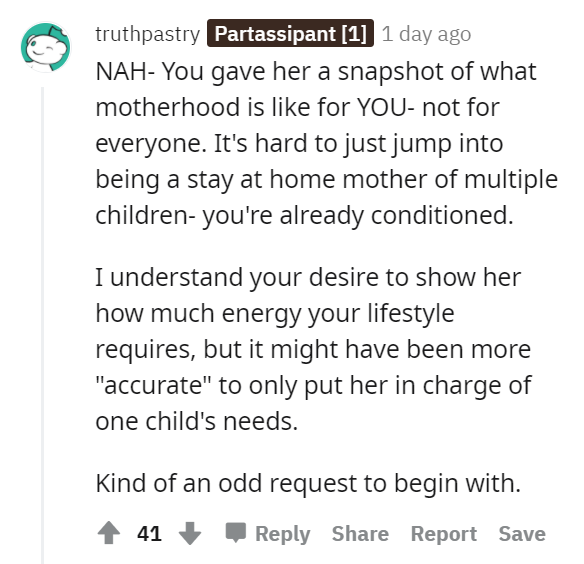 Do you think everyone should do this before deciding to have kids? If so would you ever do something like this? Comment down below and let us know.