Never assume you’re smarter than the other person.

From what I’ve learned, you should always assume that the other person has something to teach you before you really get to know them. This not only helps you be more polite and courteous but also opens up new horizons for you. After all, we as humans should be always willing to learn. And gender never comes into play when it comes to knowledge.

Now, this may sound great but the sad fact is, many people do bring gender into education. Many people love to think they know better than other people. Especially if that other person is a woman. I have no idea why mansplaining even started but it is quite apparent in many professional settings. I am sure most women have experienced this and as have I many times over.

So when one person asked Twitter users to share their own experiences with mansplaining, people had a lot to say. 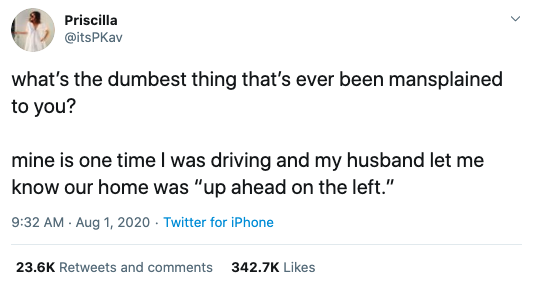 #1 Maybe he needed reassurance that HE was doing it right?

A completely random man once approached me to explain how the cafeteria worked. Grill here, salad bar over there, then you take it up to the cash to pay. To this day, I do not understand what made him think I needed that explanation.

#3 I really hope he doesn’t have a hot pocket in his life.

…. that it’s the exact same as a hot pocket and a microwave.

Summarization: “women are like a microwave, the guy makes the hot pocket and puts it into the microwave. All you really do is hold it until it’s ready”

That guy was an ass

#4 I sometimes really wish guys could give birth.

A man tried to tell me that childbirth wasn’t that difficult, because women “used to go right back to work in the homes and fields immediately after giving birth”. This was after me stating that I was exhausted and extremely weak for days after going through 20 hours of labor.

#5 If he had eaten, he would have vomited.

My husband told me I had an easy birth. Wasn’t in the room when the nurse broke my waters because the site of the epidural needle in my back made him feel faint. His excuse was he hadn’t eaten all morning. 😒

#6 Windows are so hard to use for women.

When I first moved into my current apt the landlord had someone come replace a big kitchen window with 2 small ones on each side and the guy installing it finished up by explaining to me how to open said windows (and lock them) like Id never seen crank handles before.

Just this morning my husband told me it was foolish to have different-sized pads, they all do the same thing just streamline for efficiency 😂

#9 He probably has some memory issues.

One of my dear male friends will mansplain something to me that I taught him! LOL

#11 Who was the one who thought this was a great idea?

#12 He definitely pushed all her buttons.

#13 I’ve never heard an automatic gun before but even I know this.

*semi-auto* someone can shoot as fast as they can pull the trigger and that's what I was hearing.

Yeah uhm, you can't pull a trigger that fast asshole.

A man argued with me how to properly wrap a cable.

#15 Maybe he was just uncomfortable?

#16 I never would have thought people in the Navy would be so dumb.

#18 I sure hope he is your EX-boyfriend now.

My boyfriend tried to explain me the difference between lab glassware and regular glassware. (Lab glassware is made from borosilicate glass and more resistant to sudden temperature changes blabla..)

My job involves lab work. He works in IT

#19 I really want to groan with frustration right about now.

I mean, this one was quite annoying, not sure if it is the worst I've ever had, but it made me roll my eyes quite badly. pic.twitter.com/eQsM423VfU

#20 They must be really experienced with bras then

Fiancé and his brother tried to mansplain bra sizing to me. No, just no. 🙄

#21 Don’t you just love when people call you attention seeking?

I was helping a freind with her rummage sale, and there was a table full of tools. One guy came up to me and patiently explained to me what a tool was, what it was for, and how it works.
I didnt have the heart to tell him my grandfather designed it.

#24 I mean it is very self-explanatory.

Had a random man explain to me how the airplane tray (the one on the seat in front of you) worked. I had been on well over 100 airplanes by that point.

I’m an RN. A male RN argued with me that Foley catheters go in the vagina (they go in the urethra). Repeat: a grown man and registered nurse argued about female anatomy with me and two other female RNs.

#26 I’ve experienced this so many times.

I love that despite having a degree in nutrition, my husband will ignore a piece of advice regarding food and then come home and share his amazing new info he found out “did you know…” pic.twitter.com/oRV82lsZw4

#27 Don’t you just love it when people think they know your name better than you?

#28 Of course women don’t know how to turn on the lights.

. . . . he went straight to the switch and turned it on, and it worked. I laughed and told him it wasn't me that tested the light by only pulling the cord and not turning the switch on, it was the landlord. He didn't believe me and proceeded to mainsplain how light switches work

When I pointed out to my then husband that the tower he was constructing for the play set for our daughter was upside down he said “you go in the house and do what you know how to do”. Three hrs later he was taking it apart. Two years later we were divorced.

#30 And this how you win the Nobel prize of being dumb.

My husband said to me, the woman who worked as a short order cook for 3 years, “Hey do you know the water is boiling on the stove?”, as if I’d not put it there on purpose, or that he thought I couldn’t identify the mystery of this bubbling liquid. I told him to leave the kitchen.

I could reply to this tweet with EVERY job I’ve had.

catcalling. a male friend mansplained how not everything is malicious catcalling so it shouldnt make me uncomfortable when grown men call me pretty if it wasn't meant in a bad way.

#33 I don’t think he understood anything.

I had a male peer try to explain my senior thesis to me in the middle of me presenting my senior thesis. I just, i was so appalled it took a second to even respond and I'm still angry that all I could think of was, "Well, yes. I'm glad you understand the premise."

#34 This is just taking it to a whole new level.

#35 She didn’t ask for your help though?

The man in the local supermarket car park who was "guiding " me into a parking space. I thanked him and said I had 30 + years driving experience & reverse parking sensors on my car.
(My reverse parking skillz are thing of beauty 😉).

He called me a stuck up b*tch.

#36 Thank the heavens, we have a man who can explain OUR bodies to us.

It wasn’t mansplained to me personally but I think about this interaction I sceenshotted last year at least four times a day. pic.twitter.com/uws1RdtDvG

Talking about getting plants for his apartment, "they use carbon dioxide to create oxygen" so they are good to have inside.

#38 You really should keep your mouth shut if you don’t know any better.

And my dad tried to give my sister-in-law (via my brother) advice on breastfeading. And my mom was like “both your kids were bottle fed, what the fuck do you know”? She’s my hero, if I haven’t made that clear.

Not a personal experience but I don't think anyone will ever top the time a guy here on Twitter explained the meaning of The Handmaid's Tale.

once had a gamestop employee look at me holding a copy of Detroit: Become Human and tell me "you know it's based in Detroit right?" https://t.co/Xl7HT8oR7y

not words but actions. at my job (supermarket) some older man REACHED around AND behind the plastic barrier OVER the register, less that two inches from me, all to swipe his store card himself over the scale. during a pandemic. i almost lost it.

#43 That’s what the traffic lights are there for.

#45 He was clearly not paying attention to anything you said.

My ex-boss, I’d explain in full detail how I planned to execute the project I’m working on and the moment I was done speaking he’d regurgitate it back to me in his own words explaining to me how he thinks I should execute it…which was the exact same way I first explained it

I had a cis man explain queer relationships to me, as I, a raging queer, sat in front of him. He was trying to tell me that queer people are too emotional to maintain relationships and I promptly threw my drink at him, so maybe I was a little ✨emotional✨.

I work in data science. I designed some metrics/dashboards that were kind of a hit within my company. I’ve had SEVERAL upper mgmt types email me them and say I should study them to learn how to design something for them.
I wrote those materials. They ask me to learn my own work.

#48 Her body, her choice. End of discussion.

A male coworker told me to give birth naturally 'cause it's what my body was made to do & explained how the female body works. Thanks bro, but my vagina & I've been together 35yrs, we got it😂

#49 And yet he thinks he knows better.

I had a middle aged man explain to me what a plate was…. pic.twitter.com/qgCH1VafYz

Have you ever experienced mansplaining? If so why not share your story in the comments below?