Every movie is an ambitious process, but not all of them go through the production and onto the cinema screens.

Every time a movie project is started, the production house finds a director by releasing a general idea of the movie in secretary. After the director, and other main parties are hired, a script is written to the satisfaction of everyone involved, and actors and actresses are hired. And once everything is in place, the movie finally enters production. Production in simple words means shooting.

Every movie that has ever gone into production is a very ambitious project for everyone responsible for the making. Everyone gives it their all and once the film is produced, it goes into post-production for editing until the final product is created and is ready for launch. Now one very important factor to understand here is that just because a movie is a very ambitious project does not mean it is bound to hit the big screens.

This is a sad truth that even the most anticipated movie projects just get whipped off the calendar while they are still in production, due to some unavoidable circumstances. Movies like Nicolas Cage’s Superman will never be seen because they got called into production. Have you guys ever heard the famous saying that goes “Everything happens for a reason”? Maybe that is why these movies got canceled. But we are not here to assume. We are going to find out for you guys why these movies got closed before finishing production.

Let’s take a look at some movie projects that never made it. Scroll down below to enjoy!

1. Superman Lives with Nicolas Cage in the lead, died before being born.

Director Tim Burton went big and cast Nicolas Cage for the next Superman that was going to sweep the world. They had already begun shooting but problems soon started to occur as the producer kept interfering with Kevin Smith’s script and gave bogus ideas in order to promote some merchandise. Tim Burton had had it and no one else was ready to take on the project. Warner Bros trashed Superman Lives in 2000.

2. Revenge of the Nerds was never made possible. 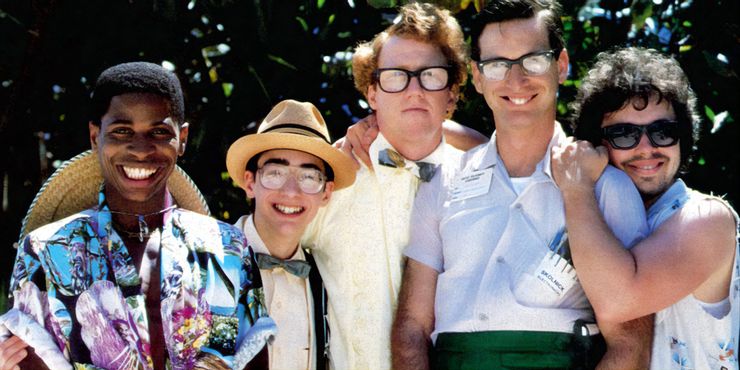 Revenge of the Nerds is an all-time classic and there have been many remakes of the project. A very anticipated remake was taken on by Kyle Newman as 20th Century Fox hired him to direct the movie. He was a huge fan of the original so he was pretty pumped to film this project.

Just after 2 days of shooting, Emory University where most of the film was supposed to be shot got out of the deal and didn’t allow them to shoot there anymore. According to them, the script wasn’t exciting enough to let them work at the university for so long. The overall proceedings were not liked by the studio either and ultimately, the project had to be canceled just 14 days after day 1 of the shoot.

3. Disney’s Broadway Brawler got canceled due to internal brawls.

Bruce Willis was hired as a lead for Disney’s sports rom-com. Apparently, the movie got onto a ventilator as soon as production began and never managed to survive. The cancellation, according to many reports, was due to Bruce Willis not being on good terms with the director. Even Disney had to surrender.

4. The Man Who Killed Don Quixote had another version that was supposed to come way before the 2018 one we know.

Terry Gillian did a pretty nice job with the movie and the project was successfully released in 2018. But the title has a history attached to it. Before this, there was a time when a version was being shot with Johnny Depp as the main protagonist. Unfortunately for the moviemakers, they were not in luck. On day 1, an F-16 flew over the sight and caused all audio to be worthless. On day 2, a flood eroded the movie set, even more trouble. And then the final nail in the coffin, Jean Rochefort who was playing Don, suffered a heart attack. The project had no hopes left and it was ultimately put to rest.

Tarantino was very ambitious about this project and had only $5000 to work with. He fetched help from his old friends from school and ended up filming the project successfully. But sadly, when the film was being edited in post-production, one day the editing studio caught fire, and half of the film was burnt. There was no motivation left to remake the whole thing again and with barely any budget left, the project was called off.

6. Yellow Submarine, a motion capture animated film that was called off by the fearing Disney.

Robert Zemeckis is known for his work in motion-capture animations. So much so that he was approached by Disney for a project but the project never came to be because Disney anticipated it would fail.

After the success of the Jump Street movies and the infamous LEGO movie, Lord and Miller were approached by Lucasfilms to make Star Wars: Solo. The strong foundations were never laid. The lead actor playing Han Solo had to take coaching classes on set to pull off the role and the directors were involved in a conflict with Kennedy. He ended up firing the directors and the project was put on hold.

On the very first day of the shoot, the director had a scene shot on an active railway track. A train actually came on the track and at a speed touching 100 miles per hour, it was impossible for the train to stop, and neither did the crewmembers have time to evade the track. The second assistant camerawoman got killed in this sad event and the other crew and staff present on the railroad were heavily injured.

The movie was immediately put on a hold and an investigation was opened against the movie director, producers, and assistant to the director. They were found guilty of murder and potential murders. The movie was canceled as a result.

9. Nimona was a highly anticipated project that never saw the light of day.

An adaptation of the webcomic series Nimona, Blue Sky production studio was ready to win all hearts with this movie. Unfortunately, the studio had to be shut down and Disney put the project on hold right after. Maybe we will get to see this adaptation one day.

10. There was going to be a 4th Spider-Man starring Tobey Maguire.

Spider-Man 4 was written, the sets were ready, the cast was ready, and the shooting was about to begin. Even a release date was announced. The movie was set to be released in a year from when production would start, in 2010. But just before the commencement of production, director Sam Raimi decided to leave the project. He said the deadline to release to the movie on May 6, 2011, was too short and that he wouldn’t be able to deliver the best product in such a short time. Moreover, he had some issues with Sony putting barriers on his creative aspects as they would keep intervening with ideas and changes. The movie was never shot and instead, Sony decided to reboot the whole franchise, and hence, The Amazing Spider-Man series was introduced.

What do you guys think? Should these movies have seen the face of the theatres? Or was it in the best interest of everyone that none of them got released? Share your thoughts in the comments section down below.

I hope you guys enjoyed this one. Stay tuned for more!